Accessibility links
In The Theater Of Politics, Staging Is Everything As the party conventions approach, elaborate theatrics on the part of presidential candidates are at the forefront. NPR critic Bob Mondello takes a look at the ways campaigns frame their candidates to make them stand out like Broadway stars. 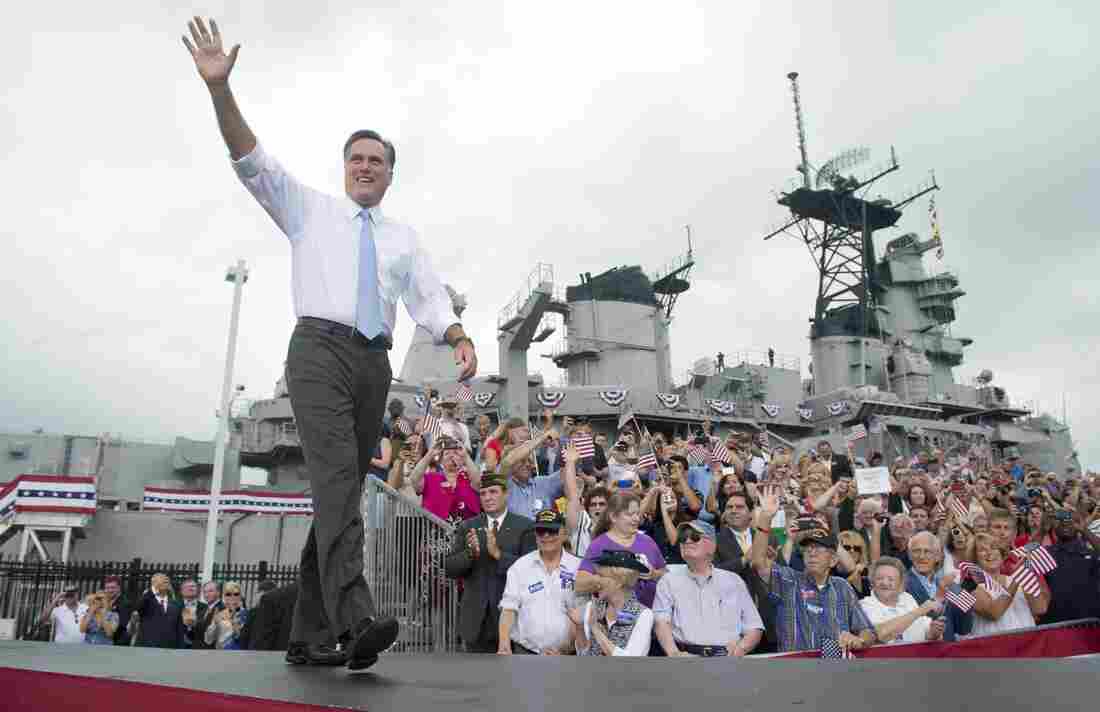 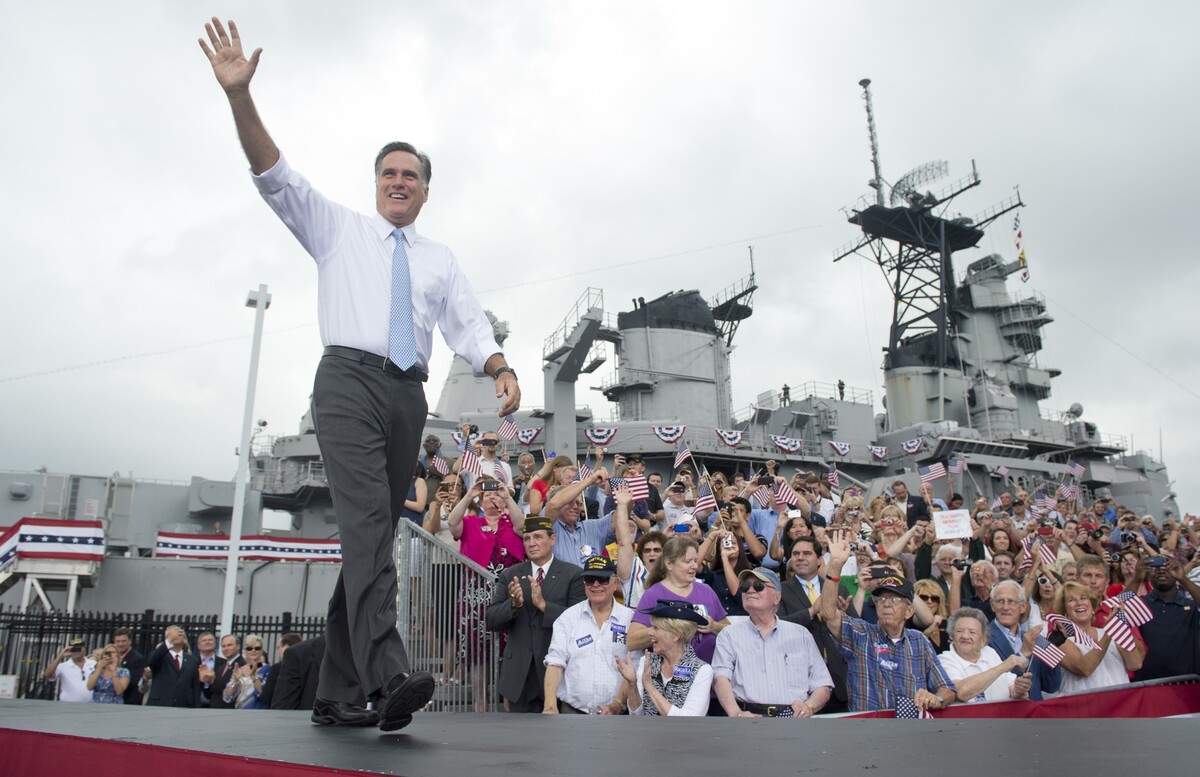 Mitt Romney, the presumptive Republican presidential candidate, arrives to announce his choice of running mate aboard the U.S.S. Wisconsin in Norfolk, Va., on Aug. 11.

During the next two weeks, the major political parties will assemble their faithful in Tampa, Fla., and Charlotte, N.C., to officially nominate their presidential tickets. These conventions were once places of high political drama. But over the decades, as the primary system has determined the candidates well in advance, conventions have become political theater. With that in mind, there's much to be said on staging in politics — not substance, but style.

In the theater, stars are stars at least partly because of the way they're presented — in brighter lighting, on higher platforms. Lesser characters can walk onstage; stars make an entrance, preferably at the top of a staircase with the rest of the cast looking up, as Angela Lansbury did in Mame, or Richard Kiley did in Man of La Mancha.

And last week, when presumptive Republican nominee Mitt Romney introduced his running mate, Rep. Paul Ryan, in Norfolk, Va., he took a page from that playbook. 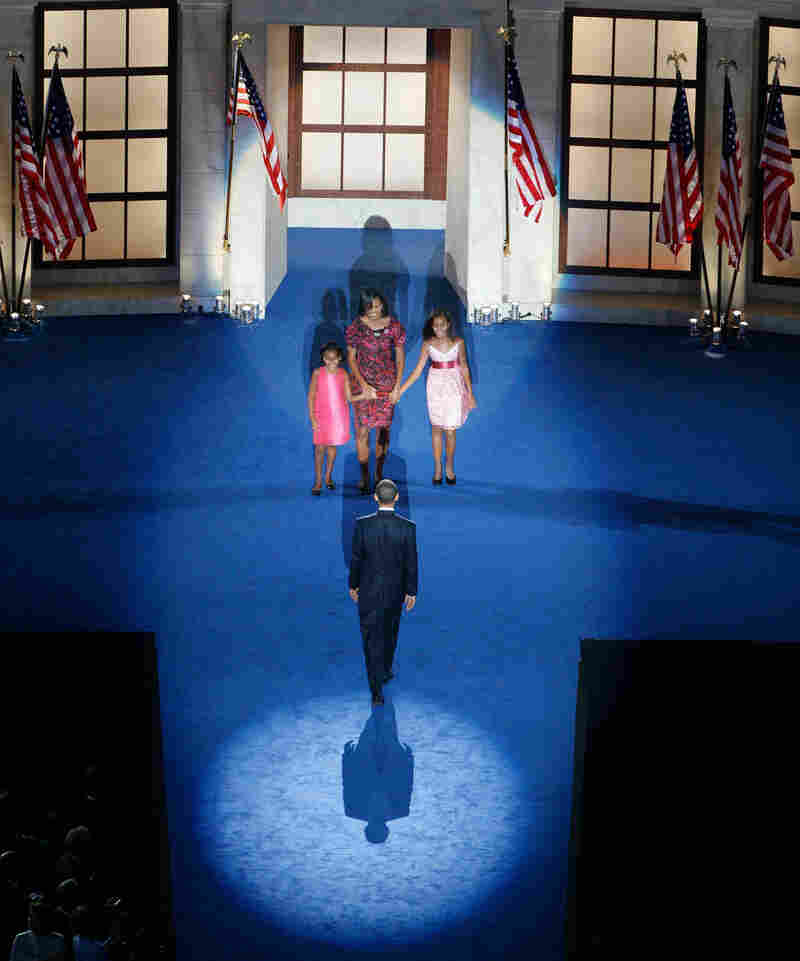 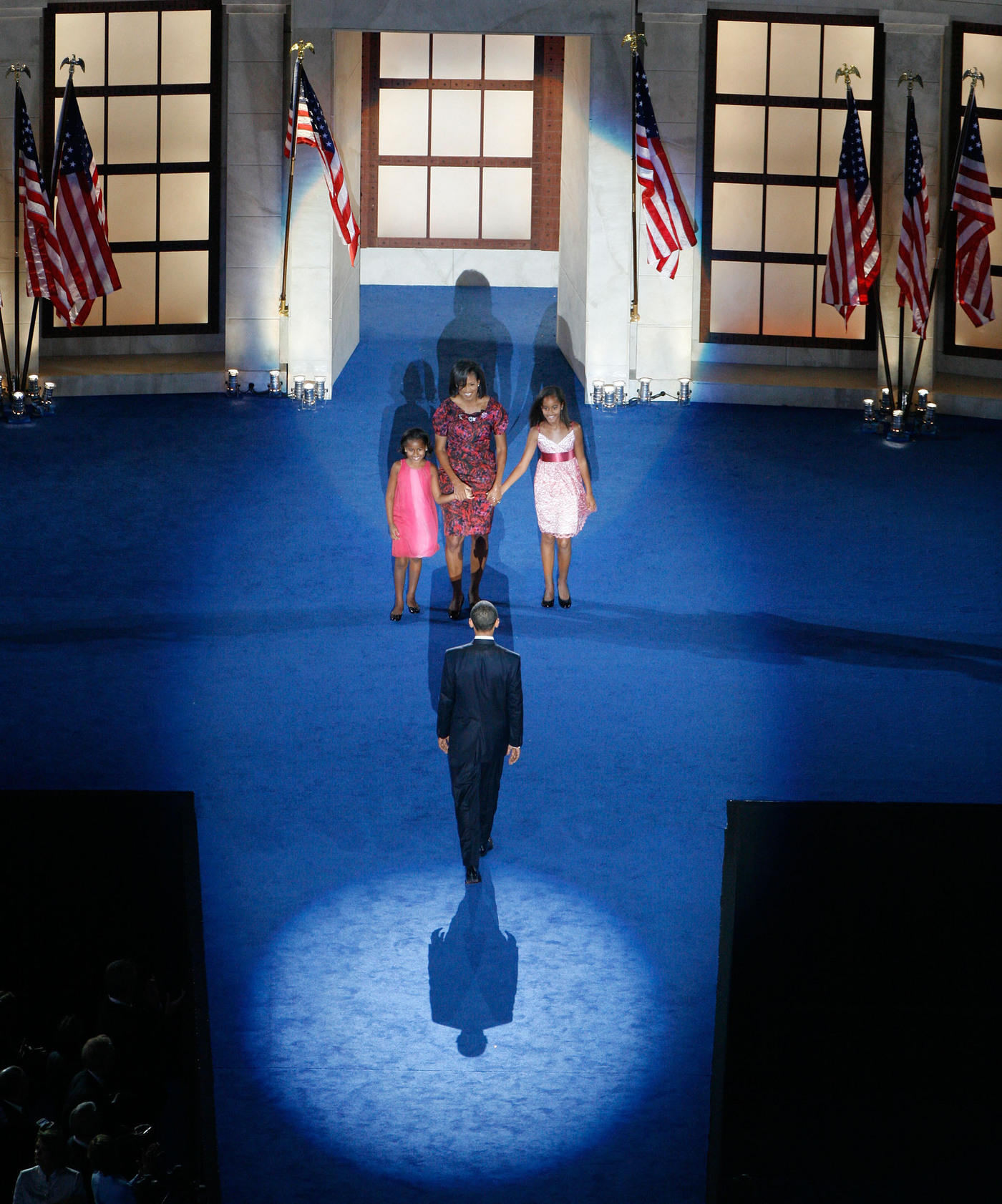 Then-nominee Barack Obama's speech at the 2008 Democratic National Convention, at Invesco Field at Mile High in Denver, Colo., was carefully staged against a backdrop of classical pillars.

There was a slight kink in the introduction — he left the "vice" out of "vice president," essentially introducing Ryan as the next commander in chief — but Romney's glitch ceased to matter the moment the camera zoomed out for a wide shot of the U.S.S. Wisconsin. High above the stage, heralded by a fanfare from the movie Air Force One, was Ryan.

And as he bounded down a staircase, it felt as if the technicians had learned from Romney's entrance a few moments earlier. They'd let their presidential candidate hit the stage during a musical lull, but for Ryan, they timed the music perfectly. It peaked just as he walked those last few steps to embrace his running mate.

Weeks of rehearsal could not have made it more effective. It's soaring, emotionally resonant — because the music's all but dictating your reaction.

The Republicans, let's note, have not always been quite so securely at the top of their game. In the last presidential race, it was the Democrats who owned the political staging. Remember that football stadium they outfitted like a Greek amphitheater for their convention finale? Then-candidate Barack Obama was framed for his acceptance speech by towering columns on a majestic, classical stage set to communicate the idea that history was being made.

A week later, the Republicans offered candidate Sen. John McCain far more simply in a spotlight on a bare stage. Though his teleprompter was silhouetted like a music stand so that it looked like he was about to give a concert, no music pumped up his arrival. There was an IMAX-sized screen behind him, though. When it filled with a billowing American flag, the flag looked fabulous, but as the cameras pulled back to capture the full effect, the candidate looked tiny.

Now, if you're a theater nut, you know that, whether you're talking classical theater or political theater, staging matters. That's why campaigns seek picture-perfect backdrops for speeches — natural vistas when the subject is the environment, shuttered factories when talking unemployment.

And conventions are a campaign's most controlled public space, the one spot where everything can be made to serve the message. So during the next two weeks, it's likely to be instructive to turn down the sound on your TV and pay attention not to what the candidates are saying but to how they're being framed. Rest assured, it's all by design.

To counter perceptions that Romney is aloof and distant, for instance, Republican strategists are designing their stage in Tampa to have the warmth of a living room, with stairs running from the podium into the audience to convey the candidate's approachability.

The Democrats, meanwhile, will return in Charlotte to what worked so well for them in Denver. Their supporting cast will play a 19,000-seat indoor arena, while their leading man will deliver his acceptance speech to a far larger crowd in the city's 73,000-seat football stadium.

Will any of this matter? Well, sure, in the sense that conventions can provide a temporary bounce in the polls. But in theatrical terms, a party's convention is only its opening number: splashy spectacle designed to introduce the players and set the tone for what's to come.

There's still plenty of time on the campaign trail for falling in love with the hero, for hissing the villain, for building to that big number in the final act that seals the deal.