Accessibility links
Romney's Energy Plan Doubles Down On Fossil Fuels Mitt Romney unveiled his plan Thursday to eliminate North America's dependence on foreign energy by 2020. The plan would end subsidies for renewable energy sources and instead rely heavily on fossil fuels from the U.S., Mexico and Canada. Not discussed were the immediate or long-term effects on climate change. 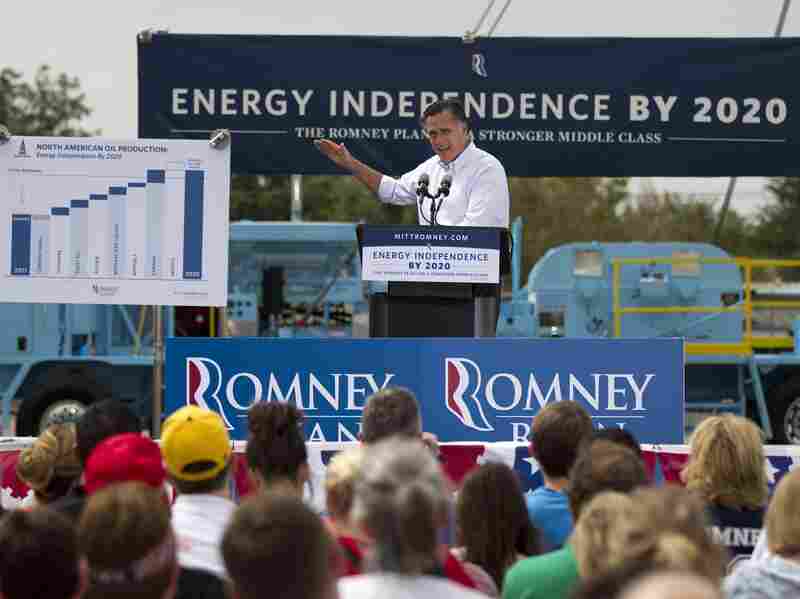 In unveiling his energy policy during a campaign event on Thursday, Mitt Romney says he wants to set a goal of North American energy independence by 2020. Evan Vucci/AP hide caption 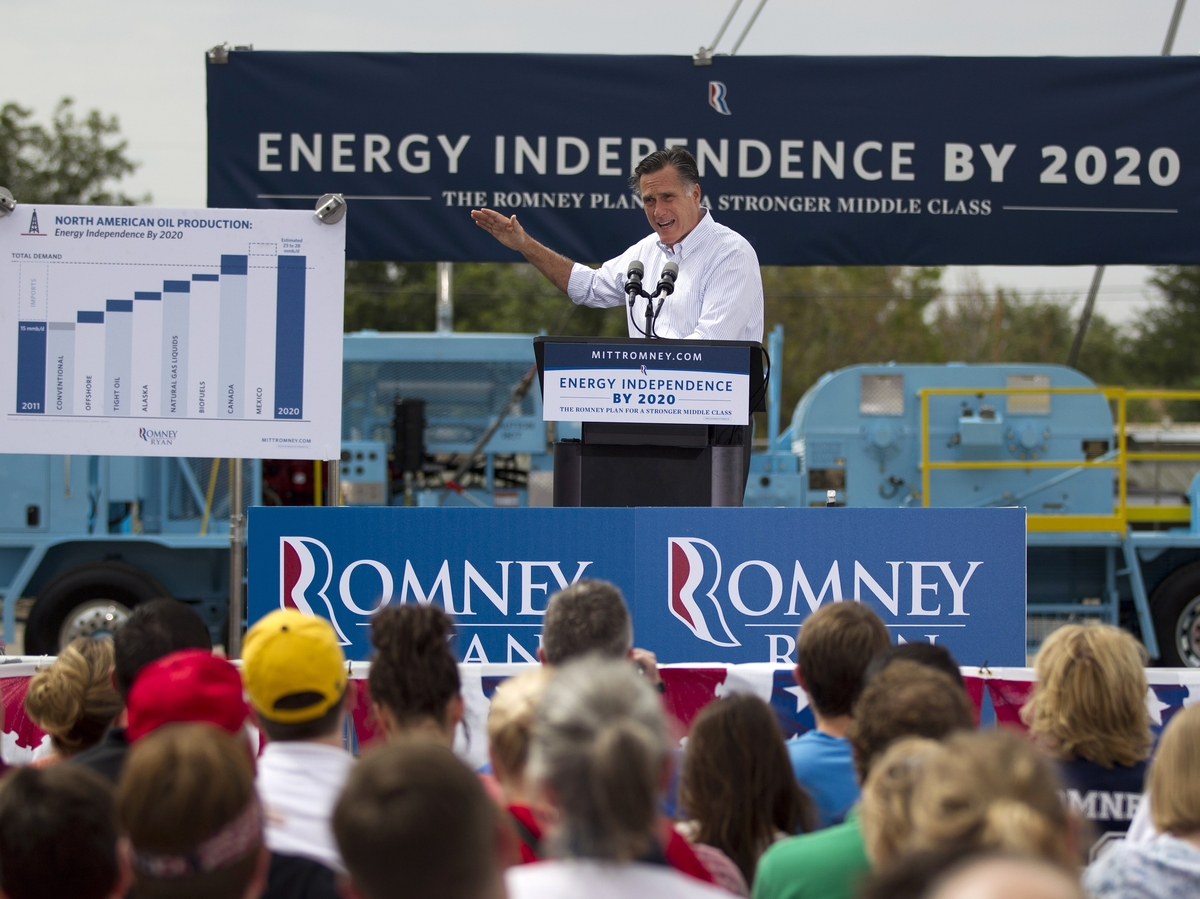 In unveiling his energy policy during a campaign event on Thursday, Mitt Romney says he wants to set a goal of North American energy independence by 2020.

Mitt Romney outlined an energy plan Thursday that would guide his Republican presidency. It focuses heavily on expanding the supply of fossil fuels. The presumptive nominee said the U.S., Mexico and Canada together could reach energy independence by 2020.

But the plan makes no mention of climate change and would end subsidies for cleaner sources of energy, such as wind and solar.

Romney unveiled the energy plan at a campaign stop in New Mexico, where he fought the wind as he showed flip charts of his policy. That was wind's major appearance in a speech that was overwhelmingly about fossil fuels.

"Three million jobs come back to this country, by taking advantage of something we have right underneath our feet," Romney said. "That's oil and gas and coal. We're going to make it happen; we're going to create those jobs."

The Romney energy plan, laid out in a 21-page white paper, relies heavily on creating deeper partnerships with Mexico and Canada. Mexico could use technical help to reverse its declining oil production, he said, and "Canada has oil sands. We're going to take advantage of those, and build that Keystone pipeline and work with Canada to make sure we have advantage of their great energy sources."

All told, that would dramatically boost oil and gas production, the candidate said.

"I will set a national goal of ... North American energy independence by 2020."

The Romney white paper cites a study by Citibank showing that is possible — provided there are sharp efforts to reduce energy demand. But energy conservation is not part of the Romney plan.

Energy independence is often cited as a way to be free of price fluctuations caused by conflicts in oil-rich regions. But that wouldn't actually lock in stable oil prices.

"Last year, when civil war broke out in Libya and oil markets were deeply disrupted, the price of oil from Canada went up by more in percentage terms than oil from the Middle East," says Michael Levi from the Council on Foreign Relations in New York.

Prices are driven by the global market, regardless of where the U.S. buys the oil from, because if the world price skyrockets, trading partners would cash in on that. Overall, Levi praises some of the fossil fuel proposals in the Romney plan, though he says it addresses only part of the energy picture.

"The word climate does not appear in the energy plan. That is a conspicuous absence," Levi says.

You can't deal with climate change without finding ways to reduce burning fossil fuels, and that's not in the Romney plan. Indeed, the Republican says he does not want to continue subsidizing wind and solar energy, which are clean supplies of energy.

That drew a rebuke from the White House.

"While the Republican approach denigrates forms of energy like wind, this president believes that investing in renewable energy is essential to enhancing our energy independence," said spokesman Jay Carney.

In his energy speech, Romney framed the matter quite differently.

"Sometimes, I have the impression that the whole regulatory attitude of the administration is trying to stop oil and gas and coal," Romney said. "That they don't want those sources, that instead they want to get those things so expensive and so rare that wind and solar become highly cost effective and efficient."

Romney said he likes wind and solar "as much as the next person," but those technologies should rise or fall simply on their economic merits.