Accessibility links
Before Reaching War Zones, Troops Risk Concussions Thousands of U.S. troops who served in Iraq and Afghanistan have suffered traumatic brain injuries. Now the military is trying to determine how many soldiers suffer concussions in exercises like hand-to-hand combat training before they ever reach a war zone.

A new military study suggests that some soldiers suffer mild traumatic brain injuries even before they go to war. These concussions, as they're also called, can come from taking "combatives" classes that teach hand-to-hand fighting during the soldiers' training.

The study looks, in part, at soldiers at sprawling Fort Hood, Texas, one of the Army's major bases. The preliminary findings, which NPR and ProPublica have obtained, suggest that a soldier got a concussion in those classes every other day, on average, over nine months.

The researchers say they need more evidence before they know how big the problem is throughout the Army. But the early findings raise questions about whether combatives training harms some troops more than it helps them.

Researchers stress that their study is relatively small, examining subjects from classes at Fort Hood with just under 2,000 soldiers. And they haven't finished the study yet.

The Army held its annual "Combatives" tournament earlier this year at Fort Hood, Texas. This YouTube video shows a number of bouts, including one where a male soldier knocks out his female opponent. It is at the 12-minute mark in the video.

But here's why the findings already raise red flags: The researchers found that almost 6 percent of the soldiers in those classes reported that they had just been struck in the head and were suffering the constellation of symptoms that the Defense Department says signal mild traumatic brain injuries.

They include "altered mental status," such as confusion and disorientation, plus a combination of other symptoms such as headaches, nausea and balance problems.

To put that 6 percent figure in perspective: Army spokesmen say more than 100,000 soldiers took hand-to-hand combat last year, at bases across the country, and hundreds of thousands have taken combatives over the past decade.

If the findings at Fort Hood reflect what's happening at other bases, it could mean that thousands of soldiers went to fight in Iraq and Afghanistan after suffering concussions in training.

Brain specialists say those soldiers run a greater risk of suffering long-term cognitive damage if their heads are injured again in battle. The nation's leaders have called concussions from explosions the "signature" injury of the wars in Iraq and Afghanistan.

"The more hits your brain takes, the less likely it will be that you will have a full recovery," said Dr. Alex Dromerick, director of neuroscience research at the National Rehabilitation Hospital in Washington, D.C. Dromerick, who has studied brain injuries with the military, didn't work on this new study on concussions. But he says that based on our description of the findings, they raise a troubling scenario.

Say a soldier gets a mild traumatic brain injury in combatives class, during training. Then he or she goes to Iraq and Afghanistan and suffers another concussion, in an explosion.

Dromerick stresses that more than 1 million civilians in the U.S. get concussions every year from activities like riding bicycles and playing soccer, according to federal statistics, and most of them appear to recover.

But he cautions that some don't recover. Some studies suggest that 5 to 15 percent of people with mild traumatic brain injuries suffer long-term or permanent symptoms. So if soldiers go to war after they've suffered concussions in training, and they don't realize they have cognitive damage, they could put their whole unit at risk.

"If there's a soldier, a war fighter, on the battlefield, members of their unit need to be able to count on them," Dromerick says. 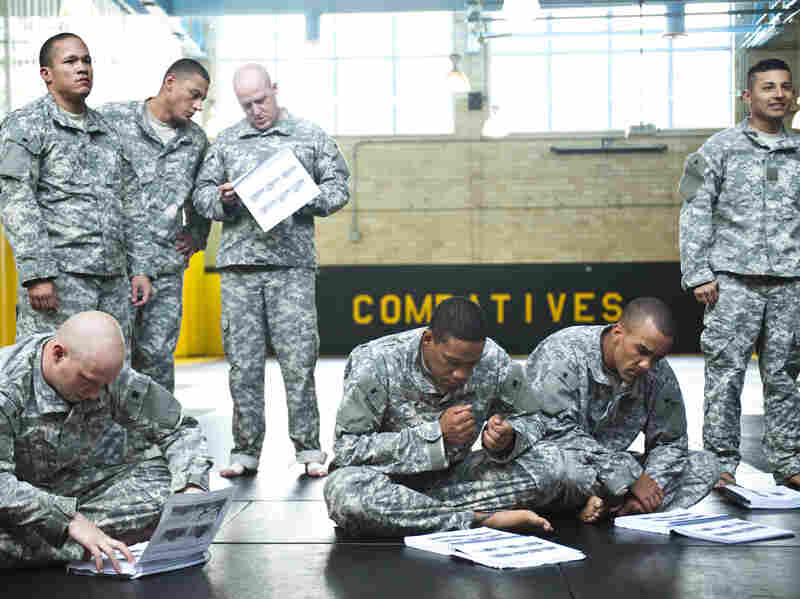 A training session for instructors who teach hand-to-hand combat, or combatives, at the Fort Benning military base in Georgia. Pouya Dianat for NPR hide caption 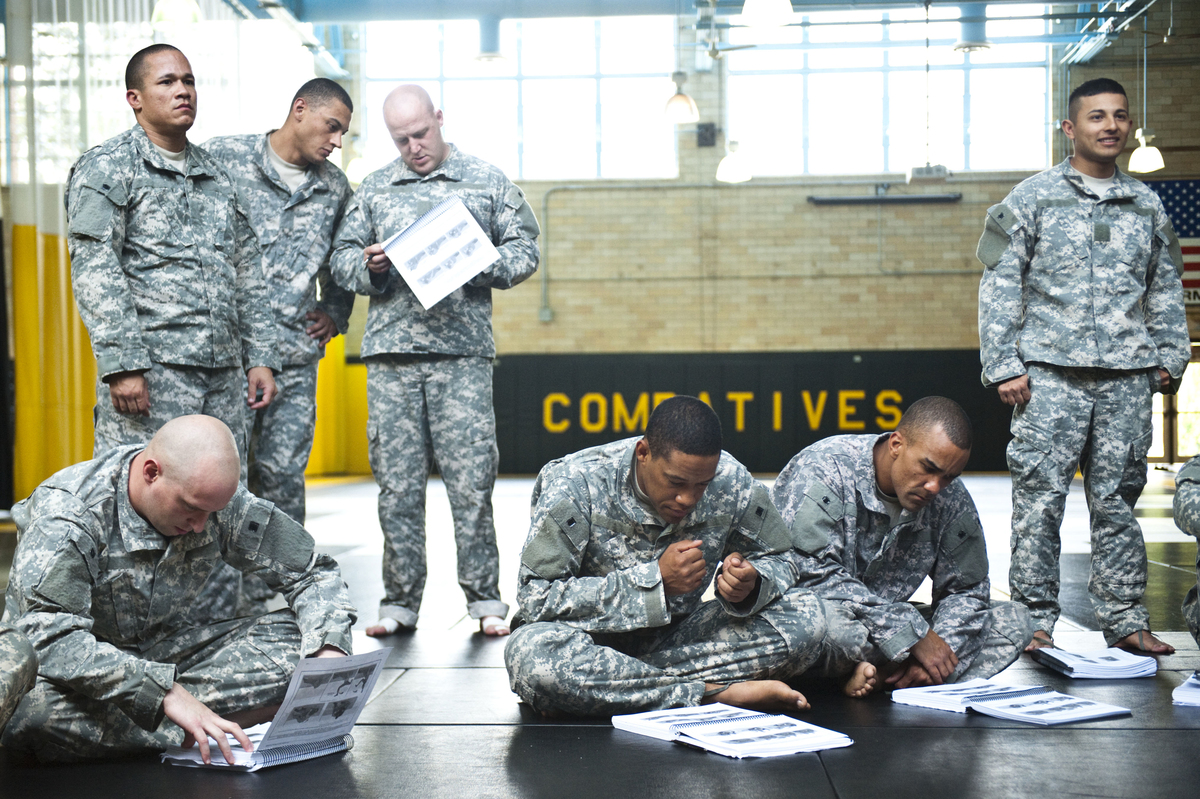 A training session for instructors who teach hand-to-hand combat, or combatives, at the Fort Benning military base in Georgia.

The Army has been teaching different versions of hand-to-hand combat off and on since World War I. It designed the modern course about 10 years ago — a hybrid of boxing and kickboxing, Brazilian jujitsu, and other martial arts.

We wanted to observe the combatives courses at Fort Hood, since that's where researchers working on the concussion study did most of their work. Spokesmen at Fort Hood didn't respond to our numerous phone calls.

But commanders at Fort Benning in Georgia allowed us to watch two days of classes that train advanced students to become combatives instructors. When we arrived, 10 pairs of soldiers spread out on blue and green mats. They wore black shorts and khaki T-shirts, plus boxing gloves and padded helmets — and shin guards, for some drills.

As trainers shouted orders and coaching tips, the soldiers in each pair took turns, with one soldier punching and kicking, the other trying to block. In some drills, they sparred. "Follow that jab up with a cross," one trainer barked. "Take the face, take the face," he shouted, as he saw one student get an opening to punch his opponent in the head.

Most of the student instructors in this class have fought in Iraq or Afghanistan, or both. They say they never saw or heard about battles where soldiers actually fought hand-to-hand.

Putting Training To Use

Instead, they used combatives training to control unruly crowds or detainees. For instance, Sgt. Nkosi Campbell told us, he was leading a unit one day in Iraq when they detained a couple of men along the highway who they suspected were planting bombs. Suddenly, the detainees rushed a soldier and tried to escape.

But Campbell says his soldiers quickly regained control, using combatives techniques. "Took the guy down," Campbell said, with a broad smile. He said to see his soldiers "use something [they learned] in training in real life, I was impressed."

Military researchers say they've always known that soldiers occasionally get hurt during combatives classes. But until recently, a lot of military officials didn't take concussions seriously. Then came the wars in Iraq and Afghanistan.

Investigations by NPR and ProPublica, and others, suggested that thousands of soldiers who suffered concussions from explosions have trouble thinking, remembering and using judgment. Congress ordered the military to screen soldiers with computer tests that can quickly diagnose these injuries, and Army researchers wanted to find the best one.

Even 1 percent of soldiers [getting concussions] would concern me. I'd say we need to do something. We don't want soldiers getting injured while training, if we can prevent it.

They went to Fort Hood to find soldiers who had concussions so they could compare a variety of diagnostic computer programs. The researchers also visited three other bases, and they were struck by how fast they found concussion victims in combatives classes, especially at Fort Hood.

Retired Col. Harvey Watson, a psychologist who is working on the study, says when he watched soldiers practicing the "punch and clinch drill," he could see why some soldiers get concussions.

"The punch and clinch drill is one of the basic training sessions," Watson said. As soldiers pair off and begin the exercise, one soldier wearing boxing gloves starts trying to punch the opponent.

Meanwhile, the opponent tries to pin the boxer's arms, or "clinch" them, before the attacker can hurt him. In fact, Watson said, some defenders get pummeled — especially small, inexperienced soldiers.

Watson said he kept thinking of his eldest daughter, who served in the Army, as he watched the punch and clinch drills unfold. "And I just sat there wondering what this would've been like for her, as tough as she is. That concerned me," he says.

Watson says they're still collecting and analyzing the evidence, but "it appears as if women in those kinds of drills become concussed, percentagewise, more often than men."

The researcher who is leading the Army study, Michael Russell, said he won't comment on it until it's finished.

John Corrigan, a brain injury researcher at Ohio State University who has consulted with the military, says most soldiers in combatives classes are "kids" in the age range he worries about.

"You may think I'm referring to children, and I am," Corrigan says. "I consider an 18-, 19-, 20-, 21-, 22-year-old brain to still be developing. So we would want to still be concerned about concussions for them. But anywhere that you have regularly occurring concussions, it would really make sense to look at, 'How can I reduce or eliminate that?' "

The Army officer who is funding the study on concussions agrees and says that the final results of the study might prod Army commanders to revamp combatives training. 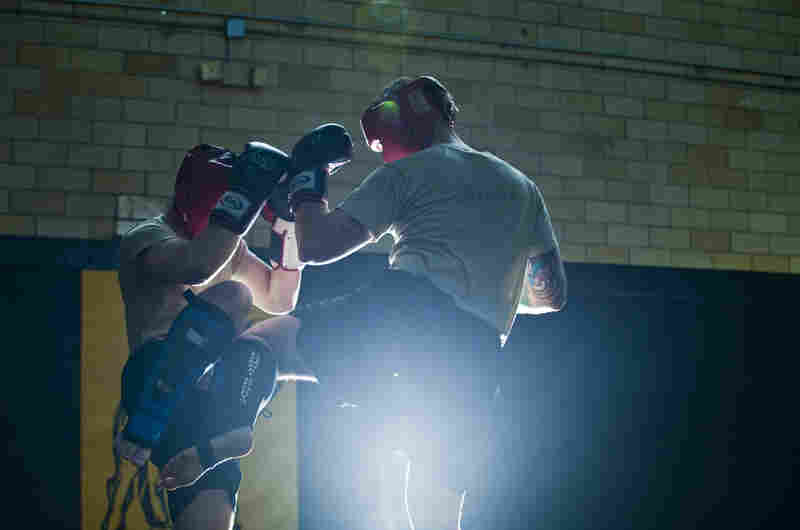 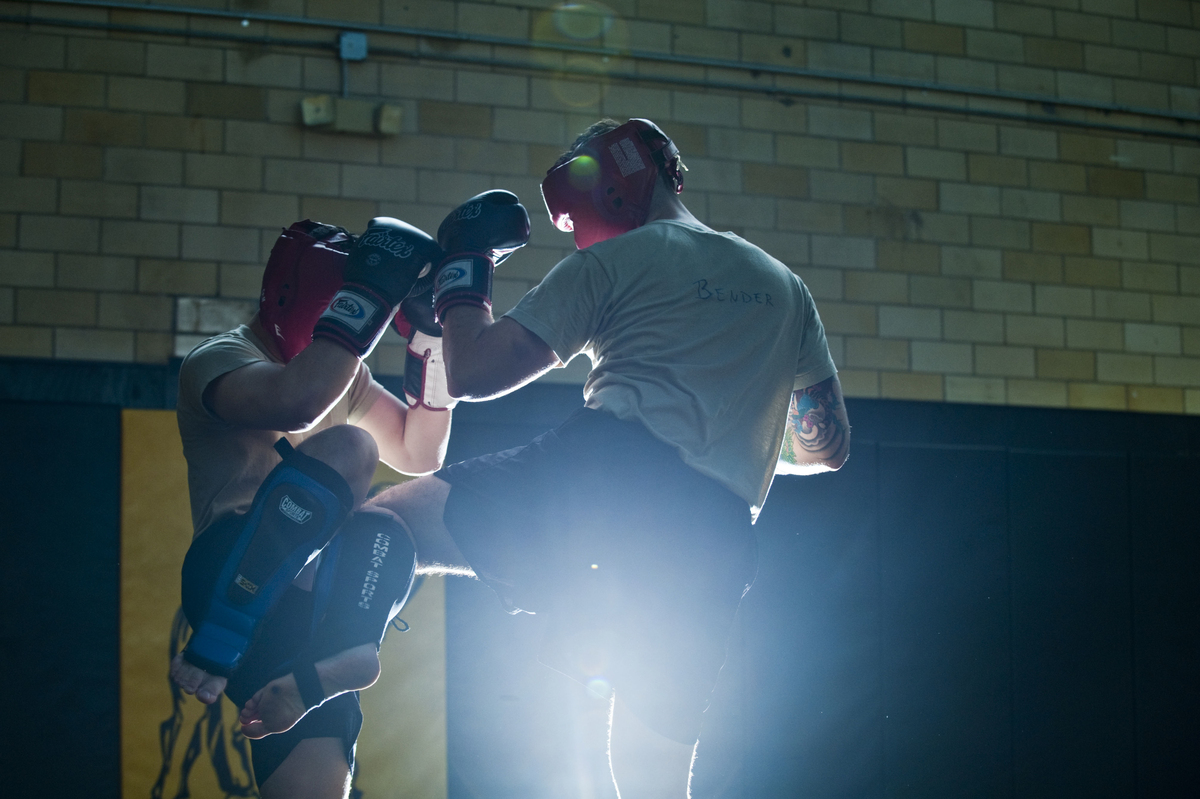 "Even 1 percent of soldiers [getting concussions] would concern me," says Col. Carl Castro, director of the Military Operational Medicine Research Program. "I'd say we need to do something. We don't want soldiers getting injured while training, if we can prevent it."

Hanson said they have also mixed in more punches and kicks to the body — which aren't exactly harmless but reduce the risk of concussions.

This story was reported by Daniel Zwerdling of NPR and Joaquin Sapien of ProPublica. More stories about brain injuries can be found at our Brain Wars special report. And at ProPublica.org.

Fort Hood is one of the Army's major bases, though not one of the main centers for basic training, as it was described in the original on air and online versions.