Accessibility links
How Brazil Lives Now, In 'Neighboring Sounds' Brazilian culture is often portrayed as either joyful folk tradition or brutal gang violence. But Kleber Mendonca Filho's Neighboring Sounds penetrates into the daily lives of suburban Brazilians — and critic John Powers says it may be the best Brazilian film since the '70s. 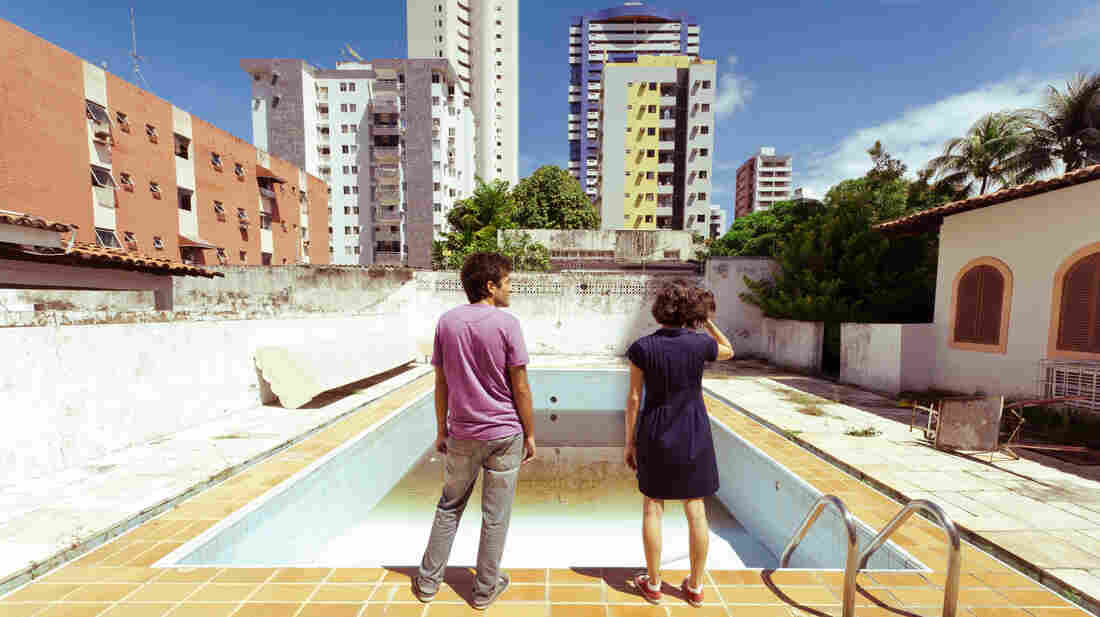 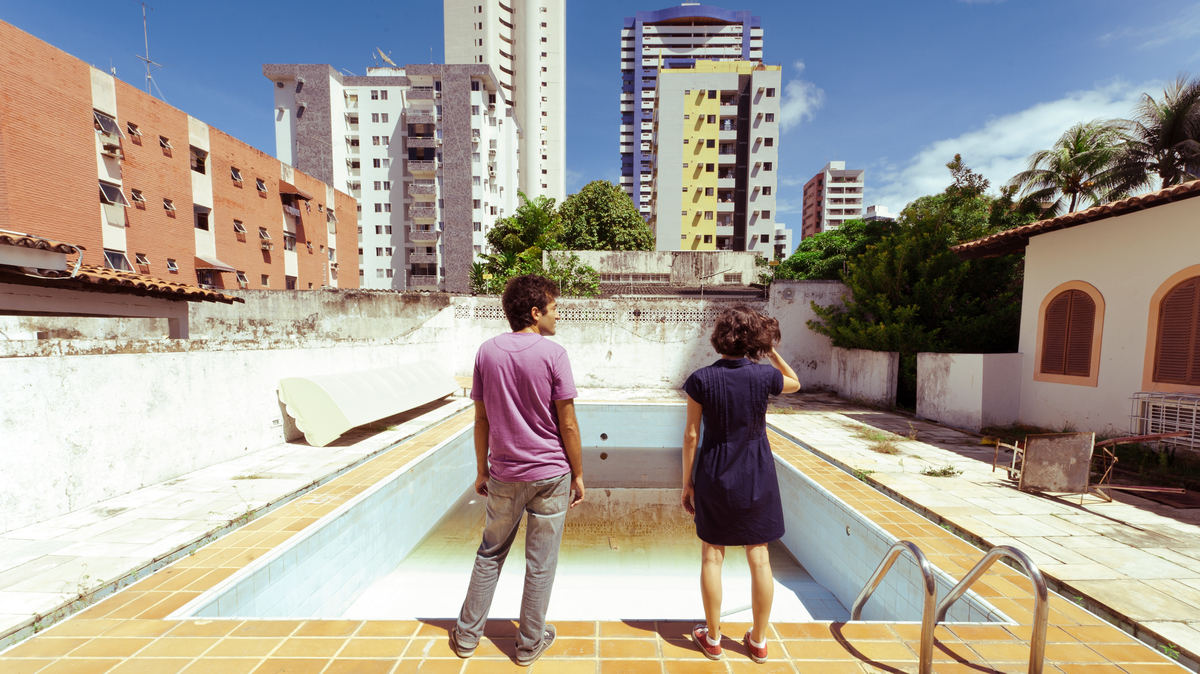 Joao (Gustavo Jahn) and Sofia (Irma Brown) are among the inhabitants of the Recife, Brazil, street where Neighboring Sounds takes place.

Between mass tourism and the Internet, it's never been easier to learn about other cultures. Yet we often stay on the surface. Watching the Olympics opening ceremony a few weeks ago, I was struck by how much of what was presented as quintessential Britishness came from pop culture — James Bond and Mary Poppins and the chorus to "Hey Jude." Although Britain had a global empire not that long ago, the show's director, Danny Boyle, grasped that the world's image of his green and pleasant land now largely derives from movies and songs.

No doubt this will prove even truer of the Olympics' next host, Brazil. While it's one of the world's five largest nations in both population and geographical area, our idea of it is almost completely steeped in dualistic mythology. One side is happy and rhythmic — samba clubs at Carnival, soccer gods like Pele, the Girl from Ipanema who still makes everyone she passes go "Ahh." The other side couldn't be bleaker. Because of movies like Pixote and City of God, millions see Brazil as a land of orphans on trash heaps and drug dealers fighting for the slums known as favelas.

Of course, what's missing from both these visions of Brazil is, well, Brazil. Especially the country that, like China, has been enjoying an economic boom for almost two decades. This modernizing, increasingly prosperous Brazil finally comes to our screens in the sly, funny, unsettling new feature, Neighboring Sounds. Written and directed by Kleber Mendonca Filho, this isn't merely the best new movie I've seen this year; it may well be the best Brazilian movie since the 1970s.

Neighboring Sounds takes place in Mendonca's home city of Recife, more precisely on a middle-class street by the sea where the last remaining small houses are being replaced by modern concrete high-rises. They're filled with plasma TVs, kids studying Mandarin and couples making love, sometimes illicitly.

Ruling the roost is Francisco, a white-bearded, seemingly affable patron who owns most of the neighborhood with money from the family's sugar plantation. Francisco's properties contain a wide range of people. There are his two grandsons, hangdog Joao and sociopath Dinho. There's a stay-at-home mom who gets stoned when her kids are at school. Out on the street, there's the team of security guards led by Clodoaldo, a hard-to-read fellow who protects the locals from terrors that seem more imagined than real. 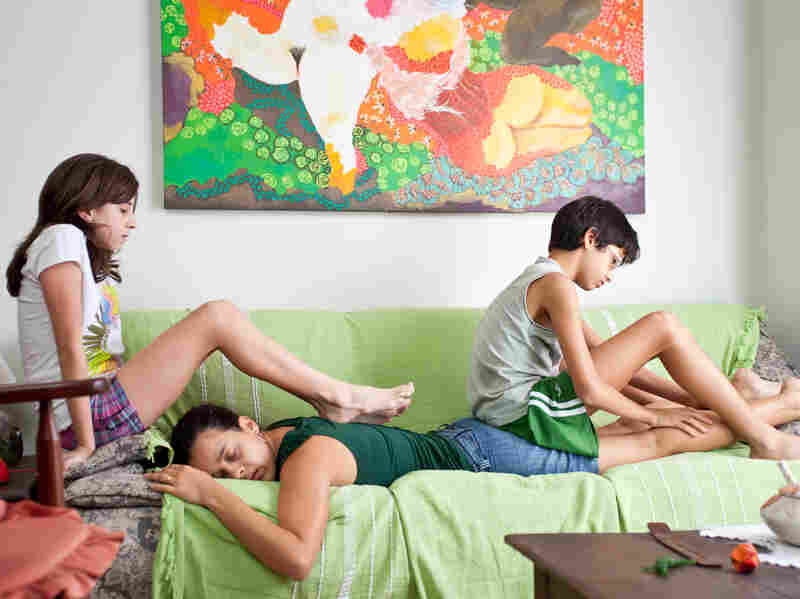 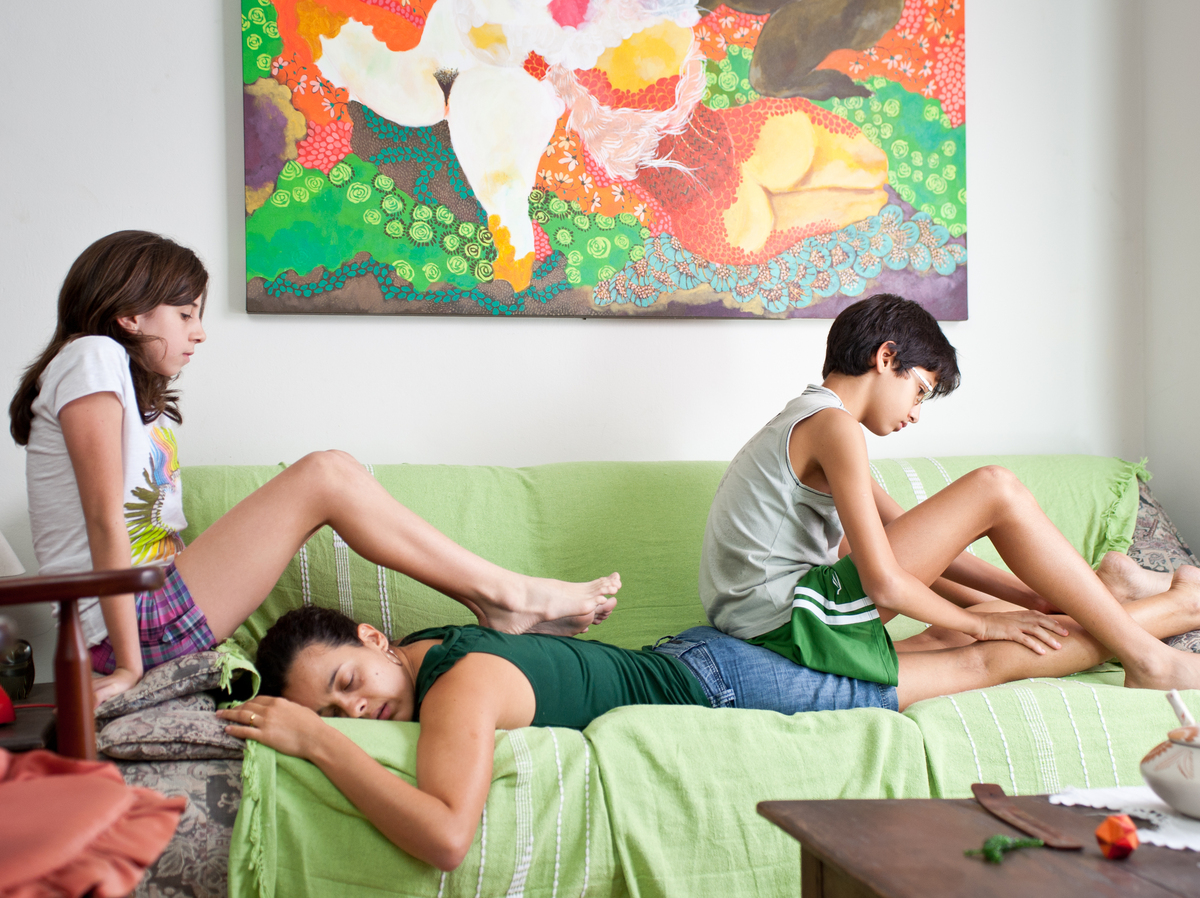 Bia, played by Maeve Jinkings, bears the weight of her children.

Now, not a lot officially happens in Neighboring Sounds, which doesn't so much give you a plot as offer a cross-section of the lives — and the sounds — in this neighborhood. But rest assured, the movie isn't some sociological treatise hammering away at some obvious political point. It's more like a low-key Robert Altman picture or maybe an HBO series by Luis Bunuel. It sucks you in by interweaving characters whose behavior — be it drugging a barking dog, arguing about firing a night watchman or simply mopping the floor — gradually reveals a larger pattern of meaning. Charged with an air of impending danger, the movie just keeps building.

In the process, Mendonca offers us a CT scan of 21st century Brazil, in which a sleek new world appears to be rising as age-old and often oppressive values live on within it. The street is still a privileged enclave owned by a landed patriarch. The whites still have black servants, who are treated like family members — except when they aren't. And the poor still get hired to protect those with money and property from the other poor people who must surely be lurking out there somewhere. When I saw Neighboring Sounds at the Los Angeles Film Festival, a woman in the audience told Mendonca that she'd spent the whole film nervously waiting for something terrible to happen.

I won't say whether it does. But I will say that part of what makes Neighboring Sounds so revelatory is that this sharply observed portrait of today's Brazil is not only about Brazil. If you travel to Beijing, Singapore, Mumbai or even the prosperous suburbs in America, you'll find local versions of this same story — complete with spanking new homes, lower-class servants who raise the kids like Mary Poppins, and an obsession with security so boundless that 007 himself couldn't satisfy it. Which is to say that Mendonca is exploring something that most American filmmakers no longer seem to notice — that the way people choose to live their daily lives reveals what a society's values truly are.