Accessibility links
Web Cartoonist Raises $1 Million For Tesla Museum A century ago, Nikola Tesla was a world-famous wizard of electrical engineering. But he fell into obscurity, and his lab on Long Island, N.Y, which was supposed to be his crowning achievement, has long sat derelict. Now a crowdsourcing campaign has brought out donations from Tesla fans around the world. 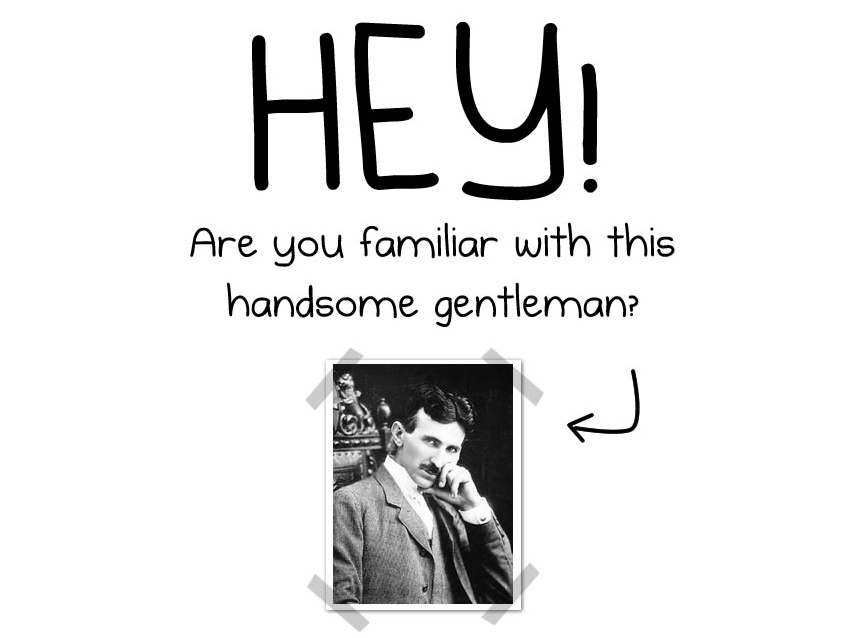 So far, The Oatmeal has helped raise over $986,000 to save Tesla's lab, Wardenclyffe, on Long Island, N.Y. The Oatmeal hide caption

The only remaining laboratory of one of the greatest American inventors may soon be purchased so that it can be turned into a museum, thanks to an Internet campaign that raised nearly a million dollars in about a week.

The lab was called Wardenclyffe, and it was built by Nikola Tesla, a wizard of electrical engineering whose power systems lit up the Chicago World's Fair in 1893 and harnessed the mighty Niagara Falls.

"He is the developer of the alternating current system of electrical transmission that we use throughout the world today," says Jane Alcorn, president of a nonprofit group called The Tesla Science Center at Wardenclyffe, which wants to buy the site and preserve the lab by making it a museum.

In his time, Tesla was world famous. But today, his name is kind of obscure. Alcorn, who is a retired teacher and librarian, says she had never heard of him until her neighbors in Shoreham, N.Y., on Long Island explained what the old industrial site was, just down the street.

Tesla's old brick building is now behind a six-foot-high chain link fence topped with barbed wire. There's No Trespassing and For Sale signs. The windows are boarded up, and there are vines and weeds all around.

Wardenclyffe was supposed to be Tesla's crowning achievement. Behind the lab was a 180-foot tall tower that reportedly shot sparks into the night sky.

"Tesla dreamed of having this site be a place where he could transmit messages and pictures wirelessly," explains Alcorn. "This is over a hundred years ago, something we're doing now but that he envisioned way back then." Tesla also hoped to wirelessly transmit electric power, free to everyone in the world.

Tesla's downfall began when Guglielmo Marconi beat him in the race for wireless communication. Marconi sent the first radio signals across the Atlantic in 1901. Tesla's funding disappeared. The tower was torn down. Tesla lived out his last years as a recluse in a New York hotel, tending to pigeons and getting a reputation as a mad scientist.

"I think, had he just invented the hydroelectric power system, we might have still known his name. But because he went on to get involved in wireless and lost in that race, his name disappeared from the history books," says Marc Seifer, author of the book Wizard: The Life and Times of Nikola Tesla.

Wardenclyffe became a processing facility for a photography company and eventually, it turned into a Superfund hazardous waste site that took years to clean up. Sometimes Tesla fans would make a pilgrimage. Seifer says on his first visit, he snuck onto the property and got chased off.

Alcorn says she's been hoping to acquire the site for a science museum for about 18 years. It's currently owned by Agfa Corporation, which is asking $1.6 million for the 16-acre parcel. Alcorn has worried that a developer might raze the lab to build retail space or condos. And a couple weeks ago, she heard that a potential buyer had emerged.

She posted a message on her group's Facebook page, asking for help from anyone who could "send out the word to celebrities or people with deep pockets or anyone they thought might be able to give us assistance."

Several Facebook contacts sent her SOS to an online cartoonist named Matthew Inman, also known as The Oatmeal. He'd published a comic about Tesla called "Why Nikola Tesla was The Greatest Geek Who Ever Lived."

Inman agreed to help, and posted a funny but serious plea about Wardenclyffe on his popular website.

"And within the first six hours, we had raised a quarter of a million dollars," says Alcorn. "Incredible."

Alcorn and her friends were glued to their computers day and night, watching the numbers go up and up on a fundraising site. There's been over 20,000 contributors from more than a hundred countries.

"They're everywhere! It's almost like an untapped underground of Tesla fanatics," says Alcorn. "I think it's absolutely outrageous and wonderful." 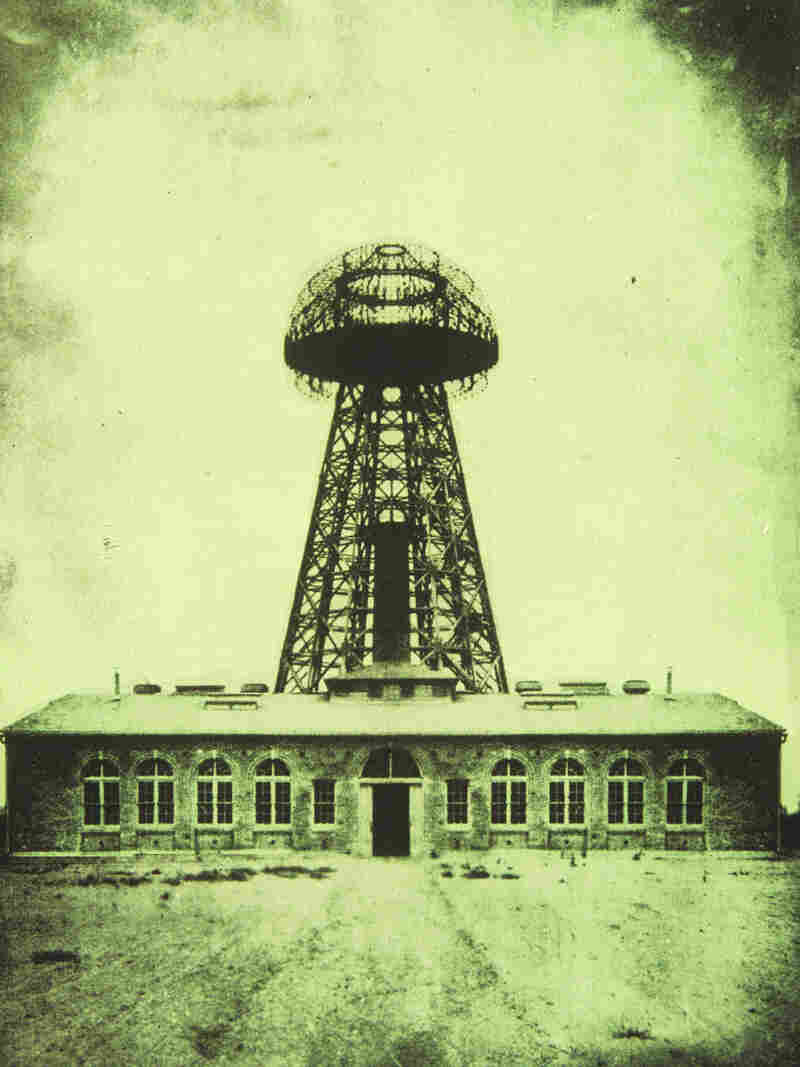 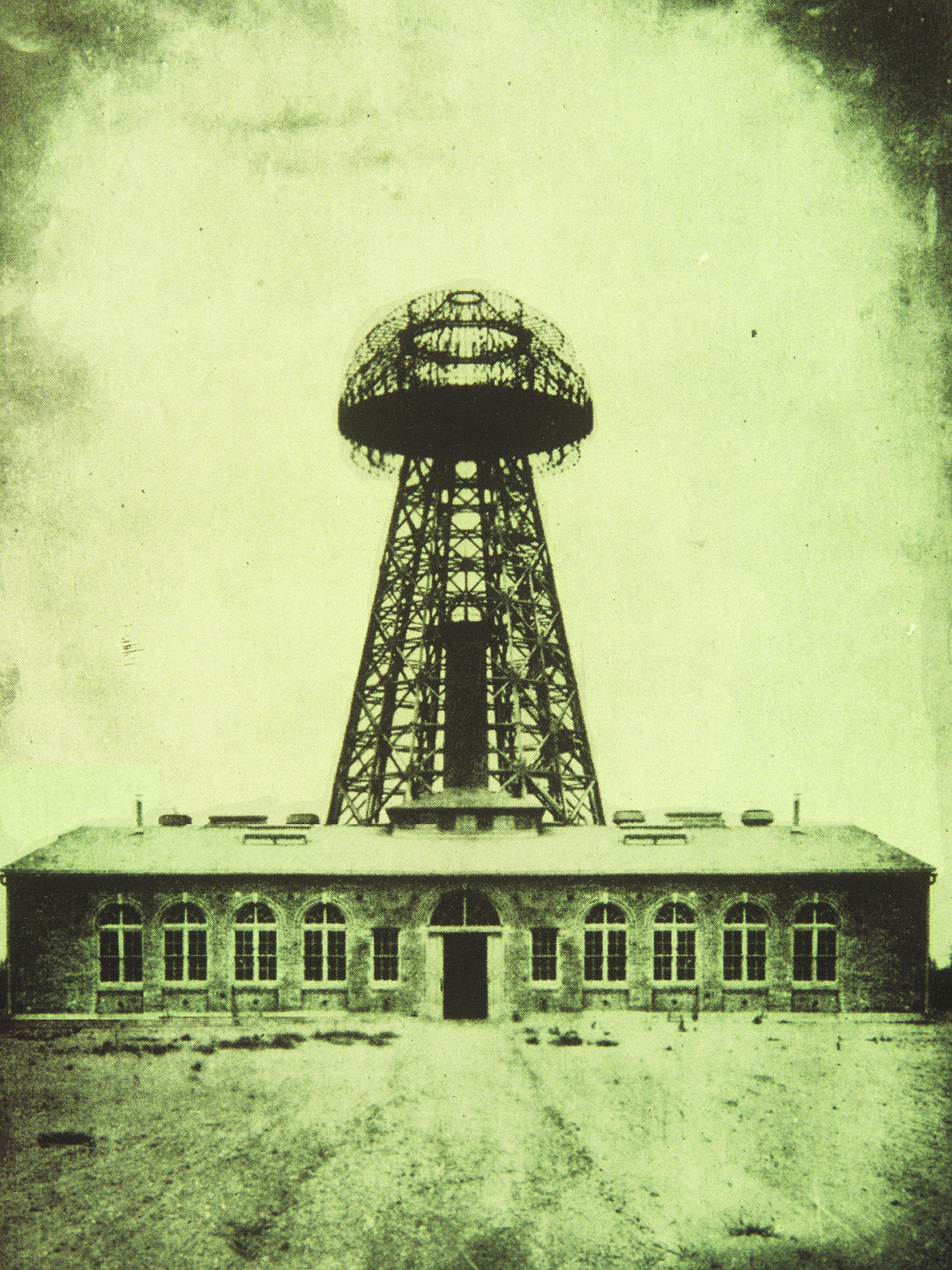 Tesla's Wardenclyffe lab building, seen in 1904. Tesla wanted to deliver free, wireless power to everyone in the world.

In less than a week, The Tesla Science Center at Wardenclyffe reached its goal: over $850,000, enough to get a matching grant from the state of New York — which means Alcorn's group could meet the seller's asking price.

On Thursday, Alcorn said she and her colleagues were talking with their lawyer about how to make an offer — something she wants to do soon.

"It's clear from this crowdsourcing effort that there are a lot of people that are very serious about Tesla, and we hope his name becomes much more widely known in the years to come," adds the group's treasurer, Mary Daum. She says professionals like architects have also been writing to offer their pro bono services.

And the money is still coming in. Alcorn says additional funds will be used to start the work of turning the ruins into a science center, and perhaps building an on-site replica of the tower that once stood for Tesla's dream.