Accessibility links
Romney Reboot? Convention Could Be The Ticket Mitt Romney has spent the better part of a decade running for president, yet the former Massachusetts governor remains an enigma to many voters. In coming days, Romney has the opportunity to begin a fuller introduction as he accepts his party's nomination at the Republican National Convention.

Romney Reboot? Convention Could Be The Ticket

Romney Reboot? Convention Could Be The Ticket 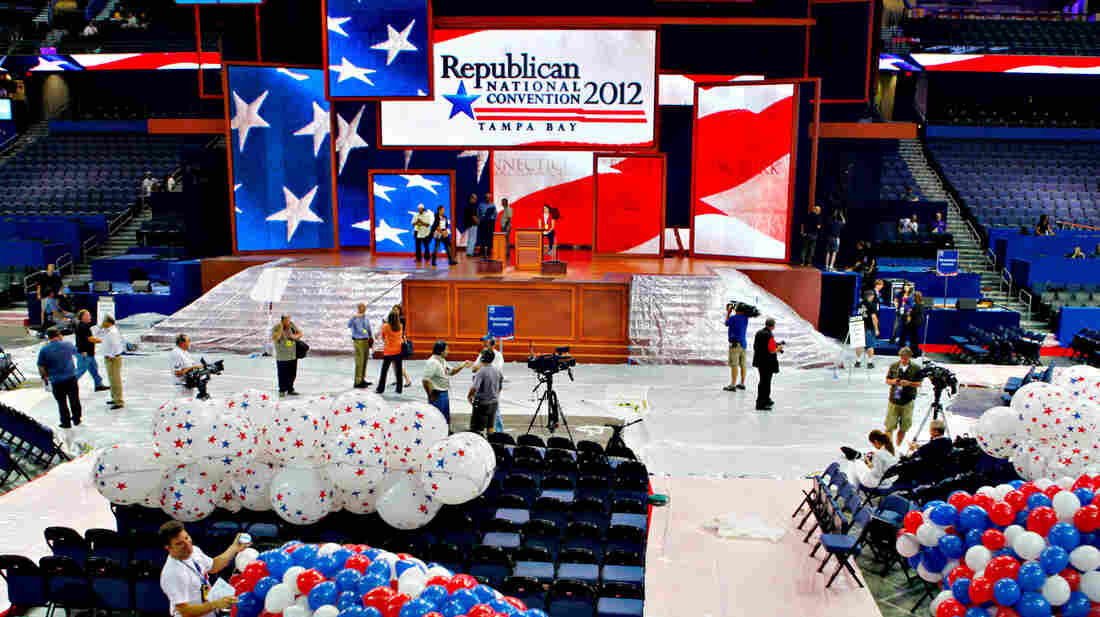 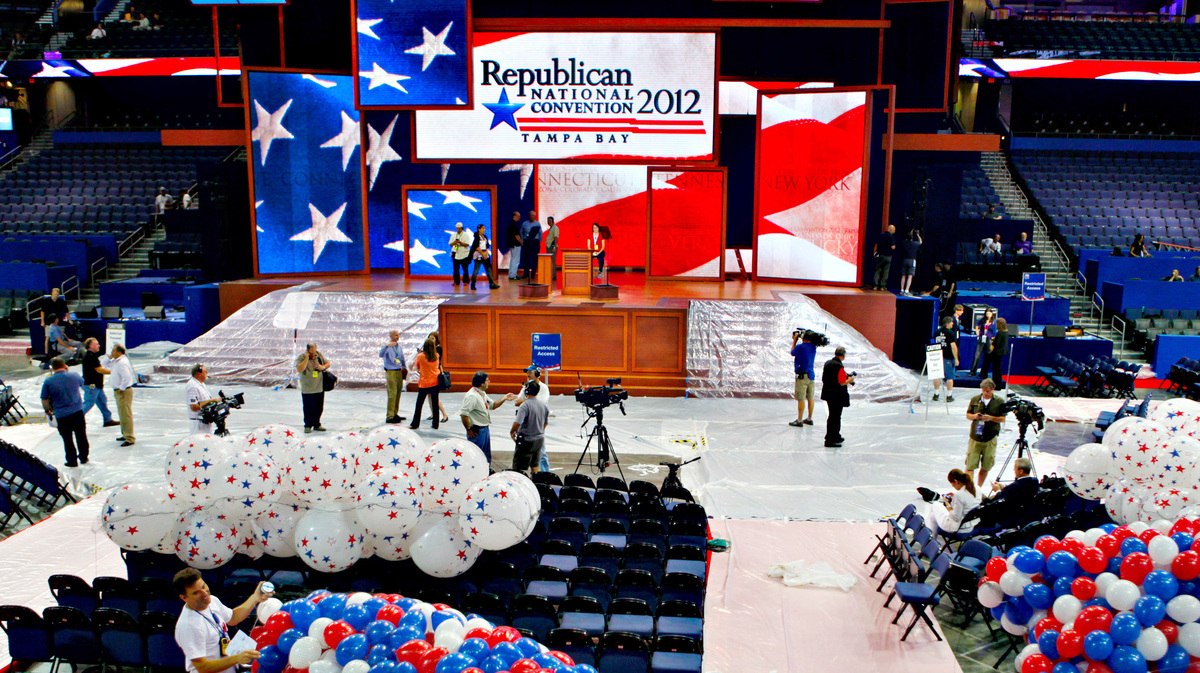 Riggers load nets full of balloons for the Republican National Convention festivities inside the Tampa Bay Times Forum on Friday in Tampa, Fla.

Mitt Romney, 65, has spent the better part of a decade running for president. And as the son of a Michigan governor who headed a Detroit auto company, he's been in the public eye much longer.

Yet the former Massachusetts governor has remained an enigma to many voters, his political positions malleable, and much of his business and private life — including his Mormon religion — intentionally obscured.

Or simply declared off limits, like years of his tax returns.

In coming days, however, Romney, an unsuccessful GOP primary candidate in 2008, has the opportunity to begin dissolving the mystery of Mitt as he accepts his party's nomination at the Republican National Convention in Tampa.

He'll arrive in Florida locked in a bitter, dead-heat national contest with President Obama, facing an uphill battle in important battleground states but within striking distance of the White House. 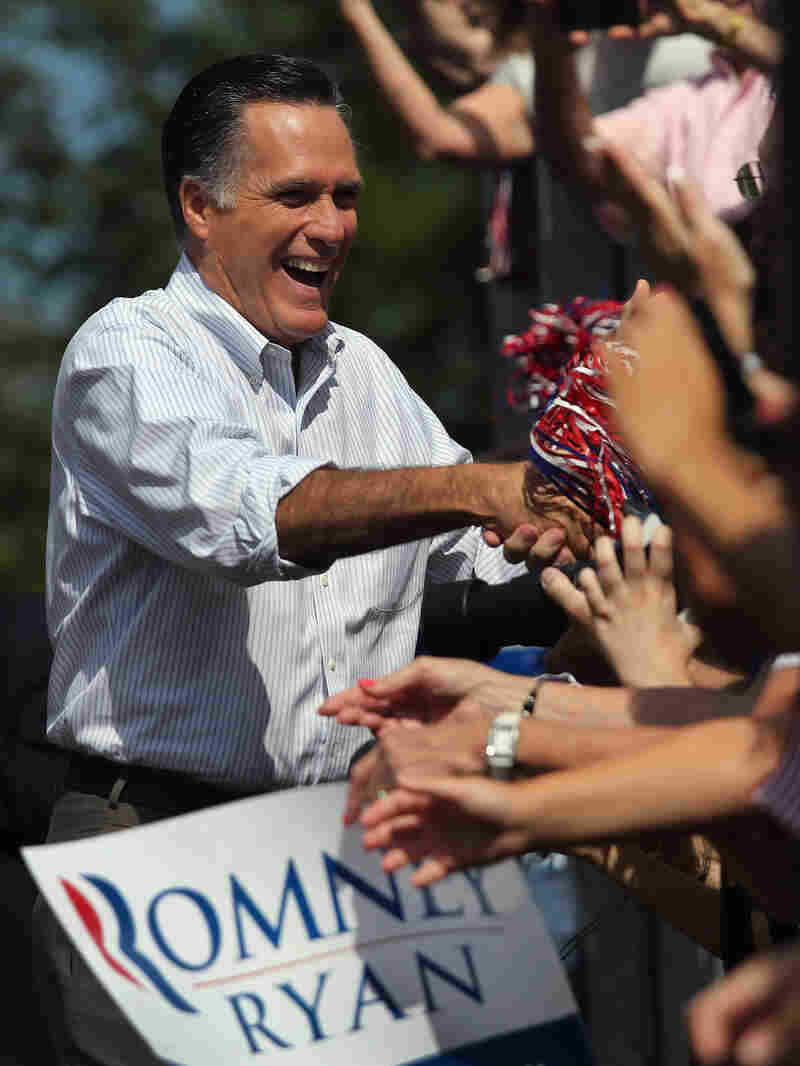 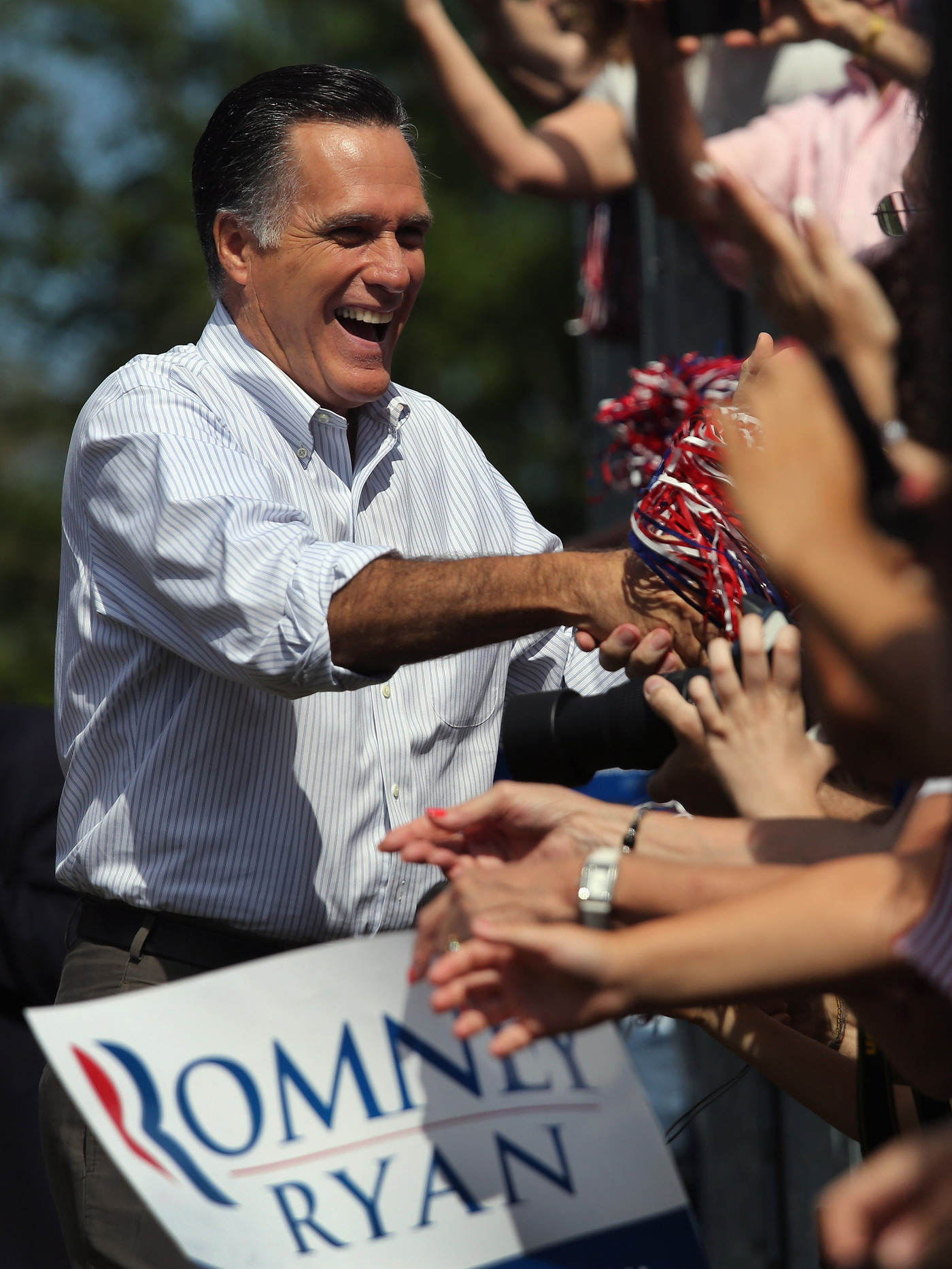 The convention, however, comes in the wake of a tumultuous political period that has put Republicans and Romney, who amassed great wealth as a Boston-based private equity guru, on the defensive about women's health and reproductive rights, and over the remaking of Medicare under the budget plan of his running mate, Rep. Paul Ryan of Wisconsin.

Romney drove the conversation further off message Friday, when he made a joke in his home state of Michigan about how "no one's ever asked to see my birth certificate." It was a reference to the fringe "birther" conspiracists who, despite evidence showing that Obama was born in Hawaii, continue to question his birthplace.

It's far from the economy-and-jobs message the nominee-in-waiting intended to ride to Tampa and beyond.

But in the convention, Tropical Storm Isaac permitting, lies great potential for a national relaunch of Romney, who emerged from a rollicking primary season as the establishment candidate. And he's been giving clear hints of what he'll emphasize.

In recent days, Romney has touted lessons learned from his Bain Capital business experience and his work on the Salt Lake City Olympics. He's also talked about his late father's influence and taken a "drill, baby, drill" page from Sarah Palin's 2008 convention playbook.

As Romney moves to the big, potentially defining stage in Tampa, we looked at what the candidate might want to do to make a case for himself to a national audience.

Ohio voters may be leaning toward Obama at this point in the race, according to two new polls, but the state with its trove of 18 electoral votes remains the ultimate battleground this fall.

Romney would be well-advised to imagine he is speaking directly to the Buckeye State voters, if not by name, because the payoff would resonate far behind the state's boundaries, says Eric Rademacher, director of the Ohio Poll out of the University of Cincinnati.

And that means talking about the economy — not selling a Medicare redo or defending an abortion position.

"The president will continue to emphasize the positives on his record and his plan for the future," Rademacher says. "The onus is on the Romney campaign to critique Obama's presidency and to provide an alternative."

All other issues will be prioritized by how well they connect to economic considerations, he says, barring a significant foreign policy event.

There is still opportunity to persuade voters: In Ohio, 13 percent of voters supporting either Romney or Obama told Ohio Poll surveyors that they were open to changing their minds; 4 percent said they were undecided.

"Sometimes we forget that politics is not exactly the No. 1 passion of Americans," Rademacher said, pointing to this opportunity for Romney: "Many Ohio voters have not paid much attention to politics since the primaries."

Romney will make history this week when he becomes the first Mormon to accept the presidential nomination of a major political party.

"It's a notable moment," says religion expert David Campbell, a political scientist who directs the University of Notre Dame's Rooney Center for the Study of American Democracy. He is also a Mormon.

"This is the first presidential election ever where none of the presidential or vice presidential candidates are white Protestants, and that's really remarkable," Campbell says. "It says something about the diversity of American, not just racial, but religion, too."

With polls showing conservative Christians — a key part of the GOP base — uncomfortable with Romney's religion, the candidate has worn his faith lightly and only recently invited reporters to join him during a Mormon service.

He addressed his faith in a 2007 speech, but not specifically again.

Campbell suggests, however, that Romney's faith is a key to voters' understanding of him and how he leads his life.

"The course of this campaign has demonstrated that when Mitt Romney's experience as a leader in the church is covered in the press, it serves to deepen voters' understanding of him," Campbell says. "It humanizes him, and I think there's not much risk in opening that part of his life."

Chronicles of Romney's time as a pastorlike Mormon bishop in Boston include accounts of him meeting with couples struggling in their marriages and meeting with families, and have evoked powerful images.

"It seems to me that when that side of his faith is put on display, it can only help him," Campbell says. "Undoubtedly, in the campaign they are considering whether [if] they open that door, it will swing wide open and all questions about Mormonism will emerge."

A bit unfairly, it can be argued. Romney's vice presidential pick Ryan, and Vice President Biden, both Catholics, aren't quizzed on their church's belief in transubstantiation, Campbell notes. Nor was Connecticut Sen. Joseph Lieberman, the Democratic Party's vice presidential nominee in 2000, who is Jewish, asked to authenticate the story of Moses parting the Red Sea.

Mormons, proud of the positive publicity the church received after Salt Lake City hosted the 2002 Winter Olympics, were surprised at the antagonism and resistance Romney faced for his beliefs when he ran in 2008, Campbell says.

Romney has a balance to strike, certainly, but if he can talk about his faith in a way that helps voters relate to him, it could be invaluable. Why? He continues to trail Obama badly among voters on that elusive "likability" measure.

At the 1992 Democratic convention, the party introduced its candidate with a film called The Man from Hope.

It launched Bill Clinton, in all his promise and with a nod to his flaws, into the national consciousness and is considered the gold standard — no matter your feelings about the former president — in political messaging.

Hollywood film and television producer Harry Thomason and his wife, Linda Bloodworth-Thomason, created the film and managed the president's image for years to come.

We asked Harry Thomason how Romney's team should introduce him next week; how the longtime married father of five, and grandfather of 18, could replicate the moment Clinton had two decades ago.

"They've got to pluck a few heartstrings," Thomason says. But he adds that creating a compelling human narrative for Romney presents more challenges than it did for Clinton, whose hardscrabble beginnings in the segregated South and burning ambition provided enough material for "three good acts."

"The problem is that [Romney] seems to have suffered very little adversity, and in storytelling it helps if there's something that doesn't go right," Thomason says.

"He seems like a very nice guy, a private person, and that's admirable," he says. "So you have to use the people who know him best to tell the story — family and very close friends. The kinds of things that you can make resonate — not something he can tell, but others can."

"I believe," he says, "this is terribly important for him."

On that, Obama and Romney supporters can agree.