Accessibility links
'Project Runway' And The Designer Who Looked Even Worse Than His Clothes On Thursday's Project Runway, one designer managed to get so wrapped up in disliking his model's body that he forgot to make her anything attractive to wear. 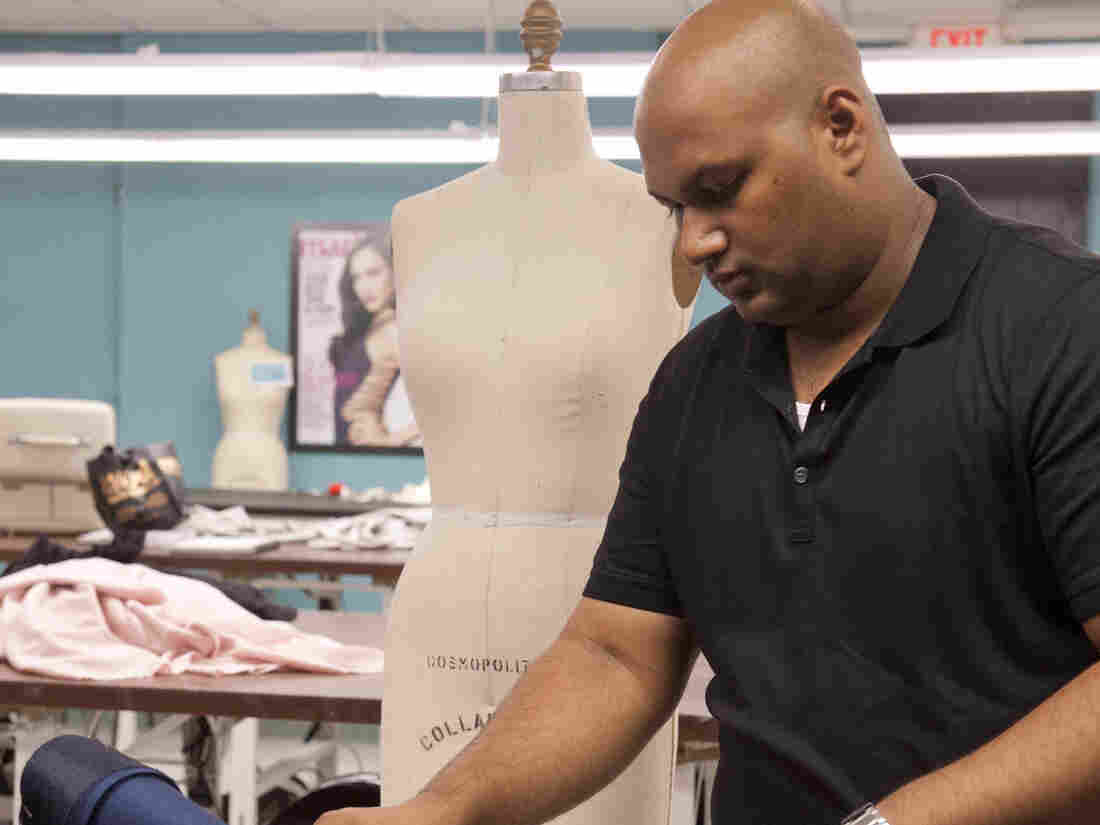 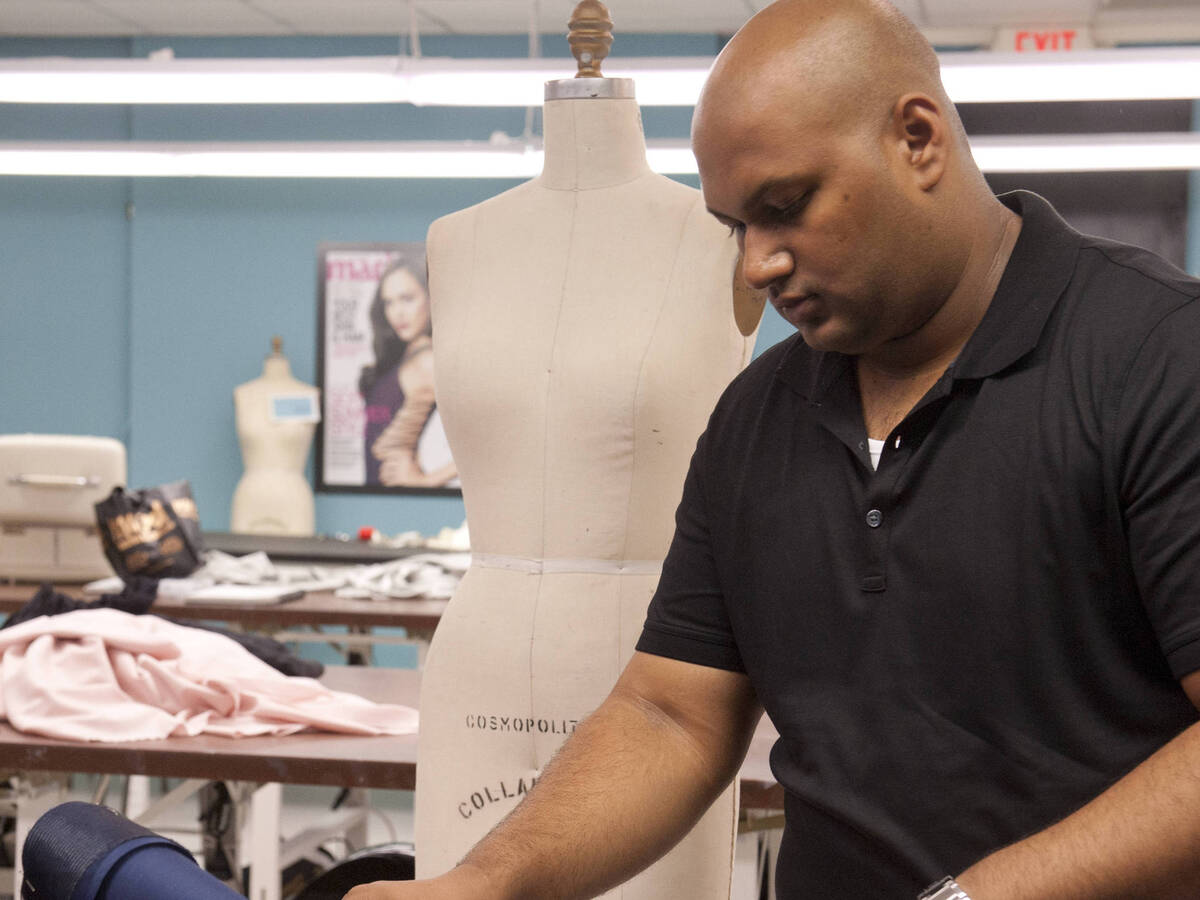 When you sign up for Project Runway, there are a few things you can expect. You can expect at least one challenge where you make clothes out of food, or auto parts, or plants and flowers. You can expect to be told to make it work. And you can expect a challenge that will require you to make clothes for people other than models. Maybe it will be designers' relatives, maybe men, maybe a rock band, maybe women who have lost lots of weight, maybe girls going to the prom. But you will likely not get all the way through the season designing for models only.

Of course, reality television constantly surprises with its ability to surprise people who shouldn't be surprised ... or something along those lines.

Last night's episode was called "Fix My Friend," and the clients were women whose friends or family had nominated them for a fashion overhaul. They varied in size and style, in age, and in what they wanted out of the designers. The challenge brought in women ranging from a singer who wanted a slinky, sexy dress to an artist who specifically didn't want anything too feminine.

And then there was Terri.

Terri's friend brought her in because she dressed too casually at work; she wears jeans and t-shirts when it's supposed to be "business casual." And Terri's assigned designer, Ven Budhu, had this to say about her in an interview: "When I first see Terri, I'm in shock." Why was he in shock? Because she was, he later estimated, perhaps a size 14. Her proportions, he said, were very different from a model's, and were — in his words — "completely off." Off of what, he did not say. His sketch had a tiny cinched waist that she doesn't have, which suggested that not only can he not design for any other shape, but he cannot even conjure it in his mind's eye. 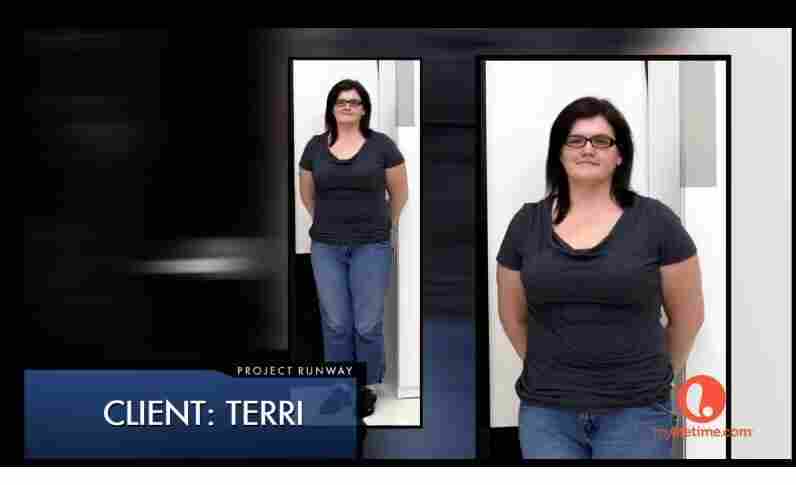 Here's a screenshot of Terri. OH THE HUMANITY.

Meanwhile, this season's previous title-holder for bitchiest contestant, Gunnar, was utterly tickled by the challenge. His client was also bigger than a model, and he treated her so warmly and sweetly that she burst into what she assured him were happy tears. They happily hugged. "I'm going to make you into a fox," he said with a mischievous grin. "You don't even know." She beamed. Gunnar picked up on the possibility that thrilling this woman, who seemed a little uncertain and less than perfectly confident, would get a better response than making another nice dress for a woman who believes she looks great in whatever she wears.

Ven, on the other hand, continued to gripe in his sourpuss fashion about the limitations of his "plus-size" (barely so, incidentally) woman. He complained that it was unfair that others had women who looked like models, while he had a "plus-size figure." Of course, problem number one here is that there are plus-sized models, and there are designers who don't react like they've been confronted with a bucket of putrid pond water when they see them.

Problem number two is that women are not all created equal aside from their size. Some of the designers got smaller models than Ven did, but as a counterbalance, all Terri and her pal really asked for was a dress or a skirt. She didn't specify color, style, length, a performing outfit, or pants. She didn't rule anything out, that we saw. He saw none of that, and none of the challenges that came with anything else about these women. He saw all the women as interchangeably easy or difficult to design for, except for their size, which made his the most difficult of all. Fabio didn't complain that his model rejected feminine dresses on a show that specializes in feminine dresses, after all.

Tim Gunn recognized the problems with Ven's approach right away. As Ven chortled in disgust at his estimate that his client was a size 14, Tim pointed out that that's only "on the cusp" of plus sizes. Ven insisted she "doesn't have a shape," and "doesn't have any sense of style whatsoever." (I'm sorry ... is the model supposed to have the sense of style? Because I thought it was the designer.) He referred to the "before" picture of his client as "a nightmare." He even complained about her age — almost 40.

When he actually worked with Terri, you could see her deflate. He forced her through a public try-on of various belts, which he could easily have determined would not fit her since he had measured her and they are belts and perhaps the easiest thing on earth to determine will not fit. If you can't figure out that nobody wants to try on belts that won't fit her in front of a room full of people, then you haven't learned much about plus-sized women, or women, or humans. If he really, honestly looked at her and thought, "OMG SHE IS SO BIG," then why wouldn't he have realized instantly that the tiny belts on display might not fit her?

(In case you doubt that there are oodles of work dresses that look great on women who don't "look like models," as Ven might say, peruse the web site of any retailer that specializes in those clothes — here's one example. Many make them, but to see them on real full-figured ladies as models, the specialty stores work better. Note how all these dresses steer into the hips and chest rather than away from them.)

Ven ultimately treated Terri so roughly and rudely that she wound up in tears, to the point where other participants in the challenge were comforting her. He couldn't stop saying things that made it worse, even if he may have said them innocently — when he told her he'd been surprised by how great she looked with her new haircut, she clearly took it as only another affirmation that he thought she was ugly. (As many have pointed out, Ven is no skinny thing himself, but that's really beside the point, because it's not as if it would be better if he were.)

What's interesting is that Ven's errors in dressing his client are painfully evident. It doesn't take a genius to see what he did wrong. Most glaringly, the high waist of the skirt is almost even with the bottom of the enormous, shiny sleeves on the top, which creates a backwards optical illusion in which her entire top half, including the sleeves, looks like one huge block. That makes it look like all of her — like her waist, in particular — is as wide as the outer edges of those sleeves. That is what you would do if you wanted to make someone's top half and waist look bigger.

My frank armchair diagnosis is that he had absolutely no idea how to cut a top that accommodates breasts. Cutting a top for a woman with a substantial chest is quite different, whether she's thin or not, from cutting one for a woman with a very small chest, as is common on runway models. I think he had no idea how to cut a nicely fitted top, so he did this weird wrapped/draped thing that just looked sloppy and thrown together.

Speaking of which, what was he thinking with that fabric? Shiny, satiny fabric is pretty unforgiving, and if you wrap it and drape it and bunch it, it's just awkward and inelegant. On a personal note, my coloring is very much like Terri's — I'm pale with dark hair — and I would never in one million years wear that bright turquoise color. Had he made her a simple wrap top in a deep berry-colored matte fabric, he might well have been a lot closer. But those giant sleeves in that shiny fabric, with that unfinished, messy wrapping? That's not going to flatter anyone. That sends an unmistakable message that the designer has given up on the client and just covered her with fabric like she's a stained couch undergoing a DIY reupholstery.

It's easy to imagine that people who watch reality television like all meanness equally, but they don't. Twitter lit up last night with angry comments about the way Ven treated Terri. You can pick on each other, but you're not supposed to pick on the civilians. He should probably kiss that Fan Favorite money goodbye.

The judges put Ven in the bottom two last night — they didn't eliminate him, but they apparently wanted to put a scare into him about the way he treated his client and how much she hated the dress she wound up with. But he learned nothing, unfortunately. Last night, he was still on Twitter, insisting that his model was given to him because he could not possibly succeed in making nice clothes for her — in other words, it was designed to force him to fail. At one point, he asked, "Why is everything about politics???", as if not treating clients so poorly that they cry — not to mention not putting them in ill-fitting, ugly tops and then blaming them for feeling negative toward them — is political rather than personal. 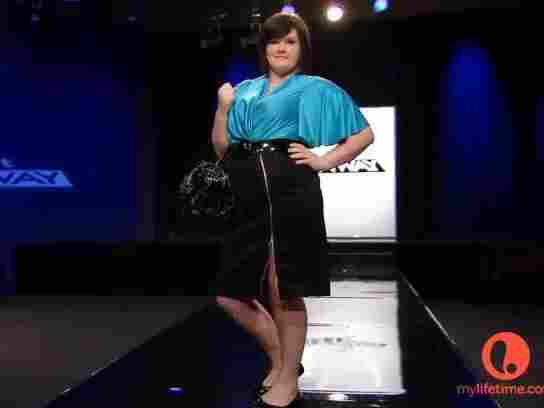 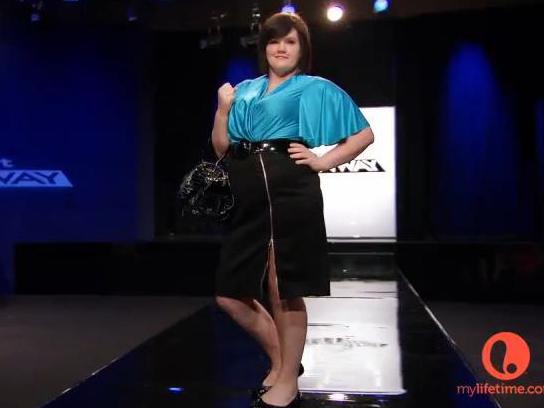 The ultimate irony is that Ven complained bitterly that his client looked old and huge, and in the outfit he made, she looks both older and bigger than she looked in her jeans and t-shirt. (Lifetime doesn't have the press photos up yet; please enjoy this screenshot.) (And really, go look at their full photo gallery of the ugly top to see it more clearly.)

As Tim Gunn ushered out Nathan, who was eliminated in the episode, he praised him, saying he would be missed. "We're not only losing an excellent designer," Tim noted, "we're losing an individual who has profound qualities of character." It was tough not to read it as a veiled dig at Ven, who had come into the episode as a frontrunner and left as a villain — a villain who still felt like a victim, put-upon by being forced to make clothes for a woman who didn't look like a model.

I regret to inform him that most women — most women he will meet in the world, most women he will bump into who saw him on television, most women who will spend money and buy his clothes — don't look like models. It will be lonely out there for a guy who can't do the one thing that would turn this around: look at this episode, feel embarrassed, repent, and offer to make Terri a beautiful dress to make up for the way he treated her.