Accessibility links
'Torture Lab' Kills Trees To Learn How To Save Them Just how do trees die? It seems like a simple question, but the answer still eludes scientists. And understanding forest ecology is increasingly important as the effects of climate change begin to take root.

Last of a five-part series

The droughts that have parched big regions of the country are killing forests.

In the arid Southwest, the body count is especially high. Besides trying to keep wildfires from burning up these desiccated forests, there's not much anyone can do. In fact, scientists are only now figuring out how drought affects trees.

Park Williams studies trees at the Los Alamos National Laboratory in New Mexico, but not the way most scientists do. "We're interested in trees that die," he says — spefiically, death by heat and drought.

Sure, lack of water kills trees, but which ones die first, how long does it take, how long can they go without water? "That's a part we don't understand very well as ecologists," says Craig Allen, an ecologist with the U.S. Geological Survey. "We don't know what it takes to kill trees."

Allen and Williams have tracked droughts through the centuries. They know there've been bigger droughts than the one we're in now, but not many. And Williams says this one is different. "In past droughts, temperatures always rebounded and precipitation rebounded and went to a wet time," he explains. "What we have now is a gradual trend toward warmer temperatures."

Climate change is making the region ever hotter. And when you have consistently hotter weather, the atmosphere gets thirsty — it sucks water out of the ground and out of plants. You get more droughts, and deeper droughts. There's less water for everything.

Computer models of climate change predict that this region will warm by several degrees before the century is out, and Allen says the "new normal" will look like the worst of the past. "So it suggests basically that the main tree populations on our mountains will die," Allen says. "They will not be able to survive there. It doesn't mean there won't be any trees anywhere on these landscapes, but it means the current dominant trees will die."

'We Don't Really Understand It'

Which ones survive, and how many, is the subject of research at the Los Alamos lab.

Nate McDowell runs what you might call a "tree torture" lab. It's actually outside in the desert, near the national lab. He's growing a group of pinon and juniper trees, about 15 feet high. Plastic gutters keep rain away from the tree roots, to simulate drought. The trees themselves are growing inside clear plastic chambers — tubes with no tops. Silvery hoses carry heated air into the chambers.

We climb in through a hole in the chamber where you can immediately feel the heat. It's about 7 degrees hotter than the outside, roughly the increase predicted by computer models of climate change over the next 80 years or so. 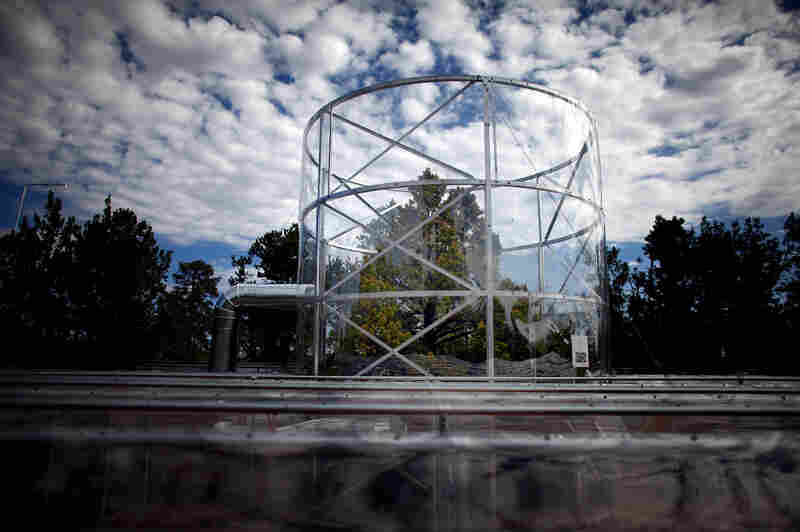 A tree stands surrounded by a chamber that keeps the temperature about 7 degrees warmer than the outside air. Scientists say the cycle of heat and drought in the region has intensified because of a warming climate. David Gilkey/NPR hide caption 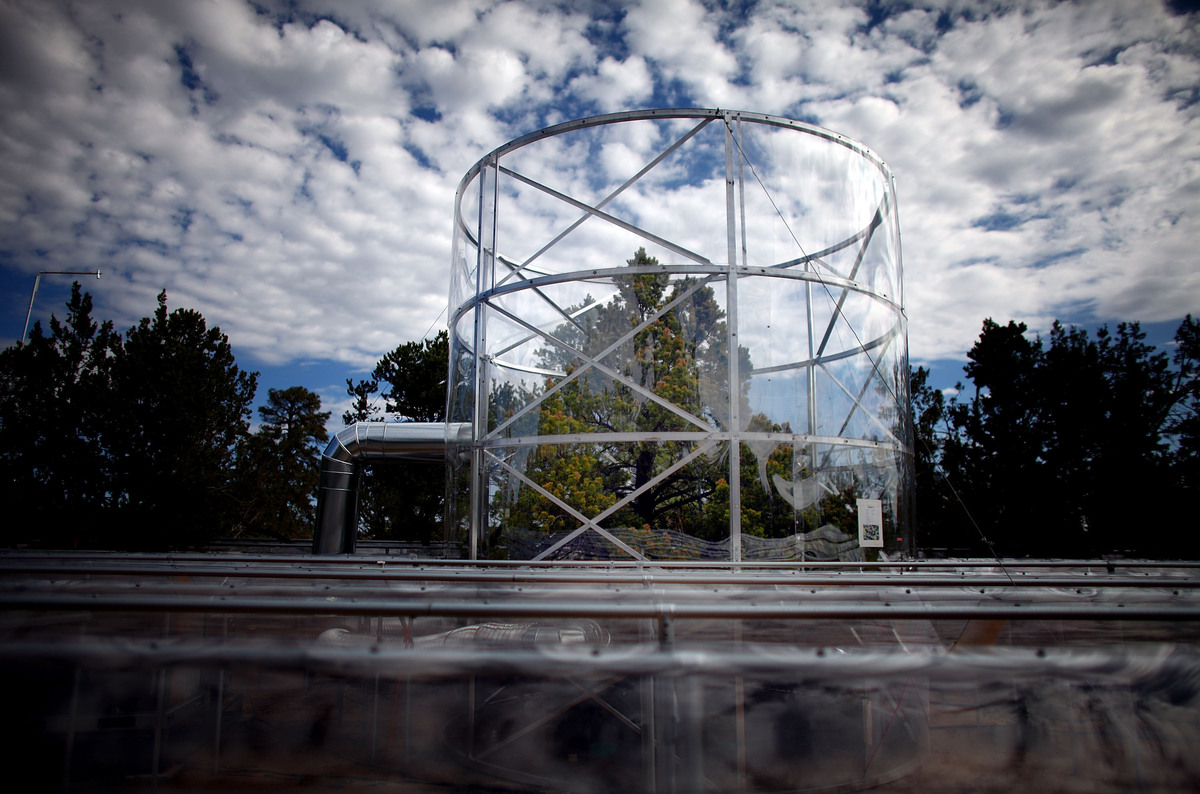 A tree stands surrounded by a chamber that keeps the temperature about 7 degrees warmer than the outside air. Scientists say the cycle of heat and drought in the region has intensified because of a warming climate.

McDowell is simulating drought and a warmer climate. He measures how the trees respond — there are instruments stuck into and all over the trees. Even wrapped around the stem.

"Every few minutes they measure the diameter of that tree," he explains. The trees look like patients in intensive care — wired up with tubes coming out of the stems. All to see what it takes to kill it. "Everyone knows it gets hot and dry; you know, beetles show up, the trees are dead," McDowell says, "but we don't really understand it."

One thing he's watching are the tiny holes in the trees' needles, called stomata. The trees absorb carbon dioxide through them, to make food. In drought, though, the stomata close up to conserve moisture. That means they can't make food. "Now that's no problem if it's just for a day or week," McDowell points out, "but you know the question is how long can they tolerate that before they run out of their stores? It's like if we didn't eat."

We'd start burning up our own stores of fat, and that's what drought-stressed trees appear to do — they start consuming themselves, though it's not fat but carbon.

And when trees die, whatever carbon they've got left goes into the atmosphere. Carbon is the very thing that's already warming the planet. "If there's more surface area of the Earth dying, more forests are dying, there could be more carbon coming out into the atmosphere," McDowell predicts. "It accelerates the warming of the Earth."

When the climate warms, trees in dry places like this may not survive. But the world's climate scientists have yet to include predictions of how vegetation is likely to respond. That's what the work here is aimed at — to help predict where the losses will be, and where there might be refuges, so we'll know more about what climate change will bring.