Accessibility links
The Avett Brothers: Matters Of Life And Death The band follows its 2009 breakthrough album with The Carpenter, a set of songs about death and mortality — themes that have dominated the members' lives of late. 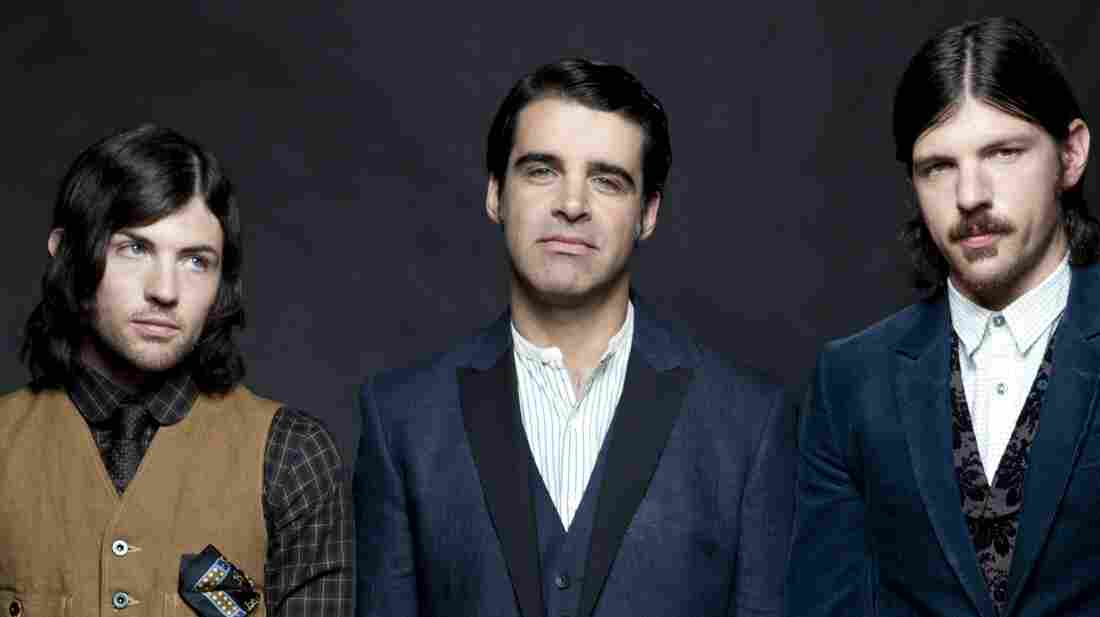 The Avett Brothers are real-life siblings Scott (left) and Seth Avett (right), and bass player Bob Crawford. The band's newest album is The Carpenter. Courtesy of the artist hide caption 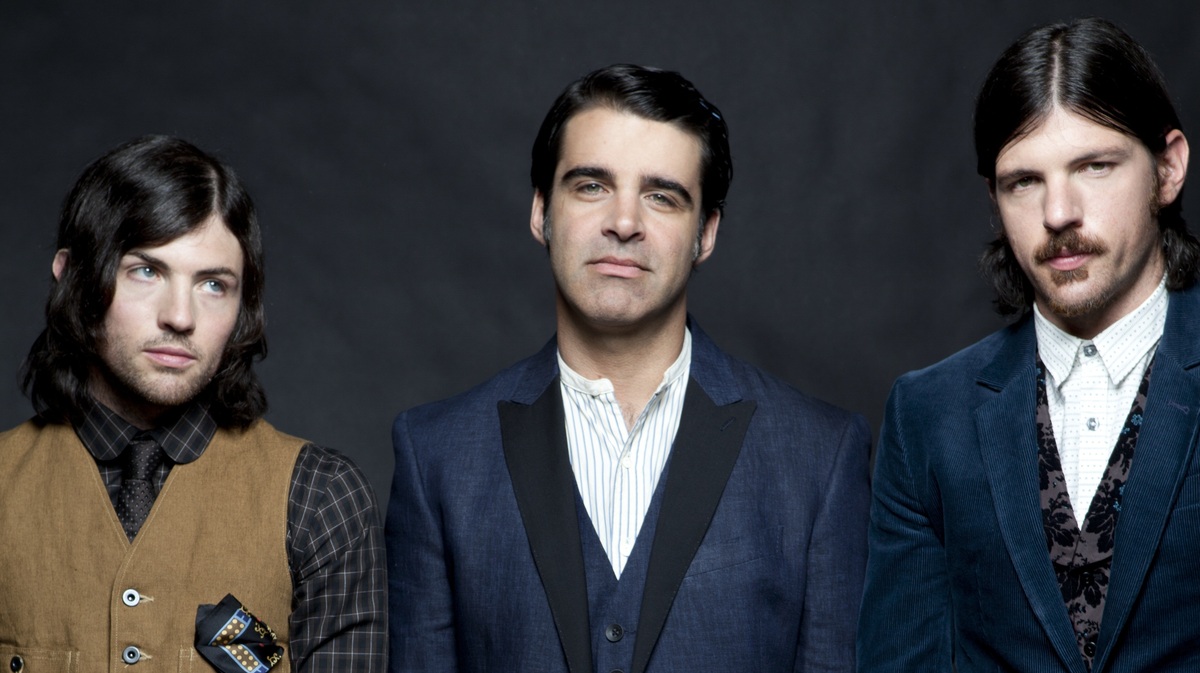 In 2009, The Avett Brothers became one of the surprise hits of the year. Paste Magazine considered their I and Love and You the best album of that year, calling it "an overpowering acoustic album brimming with sadness and soul."

That sadness took on new meaning recently. Bassist Bob Crawford took a temporary leave from the band to tend to his infant daughter, Hallie, after she developed a brain tumor.

Next month, The Avett Brothers release a new album, The Carpenter, which explores the delicate balance between life and death.

NPR's Laura Sullivan spoke with the band about the difficult period since their last album, starting out by asking Crawford about his daughter. 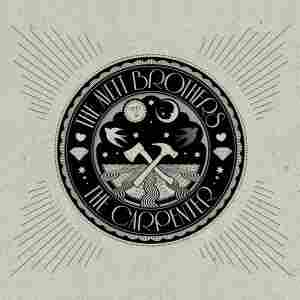 Bob Crawford: She presented on Aug. 28 of 2011. And by "presenting," we mean my wife found her in her bed having a seizure. She's still under treatment; she'll be under treatment until November of this year. She's on oral chemo, she's being treated through Saint Jude's Children Hospital in Memphis, Tenn. She's doing really well. I mean, it's astroblastoma glioma, which is a terrible, terrible thing. But she's ... a miracle.

Sullivan: How old is she?

Sullivan: Are you touring with the band while this is going on, or are you mostly with your family?

Crawford: This is actually my first trip in a year. But I've gone out and done shows. You know, when things were going well, I would break off and play two or three shows at a time, as best I could. But I think what's important to understand with this is there's a lot of kids that are going through this, and there's a lot of families that go through this. What they face every day is unimaginable. I think you always need to have hope on these things.

In the music, you need the theme of death to celebrate life. And what you see at St. Jude, people are daily celebrating life while they're fighting off death.

Sullivan: Has it brought you guys, as a band, closer together?

Crawford: Incredibly, incredibly close together. My wife and I couldn't have faced this without these guys.

Sullivan: Seth, do you guys realize how often the theme of death appears on this album? At least half of these songs deal with it in some way. I'm wondering if maybe it's been something you guys have been thinking about because of what Bob has been going through.

Seth Avett: That certainly advanced it quite a bit. That certainly brought priorities into focus, sort of violently and very quickly. You know, the record basically was finished by the time that shift, that life-altering event, came down. But it's not the only tragedy that we're familiar with. The older you get, and this is a kind of a depressing thought, but in some ways you're just biding your time between tragedies. Anytime something's not going completely off the rails, you should be really thankful for it.

Sullivan: You guys have been recording for years, but you earned legions of new fans with your last record, I and Love and You. All of a sudden, there you were in the Top 20 on the Billboard charts. When something like that happens, do you try to analyze what you did differently? Do you try to repeat it?

Scott Avett: You really don't want to repeat it (laughs). We try not to repeat what we do. However, everything we've done has been from the ground up. We were so blessed with what I guess some would consider failure early on: We had a very slow increase in crowds, increase in notoriety. But we've never been all that surprised. We also were raised with huge amounts of [false] confidence, so I would imagine when we went into this we were more surprised that we weren't superstars on our first recording — which was a god-awful recording as far as quality. We were so urgent, so anxious and so fast-paced that we were just rushing through everything?

Sullivan: Why are you thankful for the slow growth?

Scott Avett: Because at 25, if I was sitting at this desk speaking with you, as pompous as the things I have to say are now, they would be millions of times more pompous and inappropriate.

Sullivan: You certainly get a lot of love for your music. What would you say is the greatest compliment that you guys have received?

Seth Avett: There's a certain nature of compliment that is easily the best one to receive, and that comes out of tragedies in the lives of our fans: when someone says to us, "Your music helped me though this hard time" — alcoholism, a death in a family, cancer news, whatever. Last night we played in Chico, Calif., and a family was there that recently had a tragedy with a fire taking their home. You could see in their faces that they had been through something very rattling and life-changing, but you could also see that they were there to have a good time and to find some joy. And being able to be a part of that or provide a forum for that — is there anything that could be better than that? I mean, we're just writing songs and playing them for people.

Scott Avett: I've also been very flattered and honored to see teenage kids picking up instruments under our inspiration. I think that's just amazing, because I remember being there. I understand that feeling, I recall it clearly. That, to me, is a very special thing.

Crawford: I think the best compliment is the way the people, our fans, how they support each other. If there's a death in the fan community, they all rally around that family. And the way that they've supported our family — as we've gone through the tragedy that we've gone through, we've gotten an amazing outpouring of support from the Avett fanbase. Like Seth said, we're just writing songs and playing them, and the love that's been generated by all that is just overwhelming.

Seth Avett: It's a weird sort of compliment, and a beautiful thing, to become peripheral to that and to see — you know, this cliche, "Music brings people together" — to actually see that in real life and only vaguely be aware of all the connections that are being made. We're just something they have in common.

Scott Avett: It also has become a responsibility of ours, an obligation that I think has taken time for us to accept and take on. Early on, you don't really imagine that sort of thing and you kind of wonder if it really happens. Once you see it really happening, you have to believe. If someone is telling you this is what you are to them, whether you believe it or not, you have the responsibility to respect that.