Accessibility links
Ugandan Gold Medalist Returns To Fame And Fortune Stephen Kiprotich came out of nowhere to win the gold medal in the marathon at the London Olympics. His rags-to-riches story has buoyed spirits in his impoverished homeland. Now, he is grappling with his newfound fame and fortune, while eagerly anticipating the return to his great love, running. 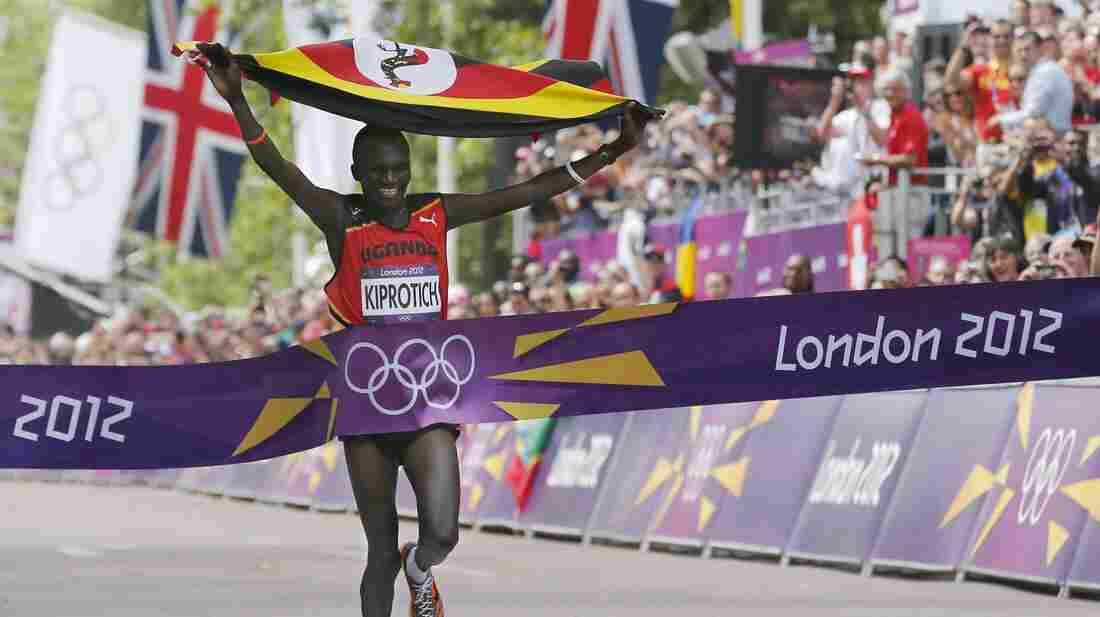 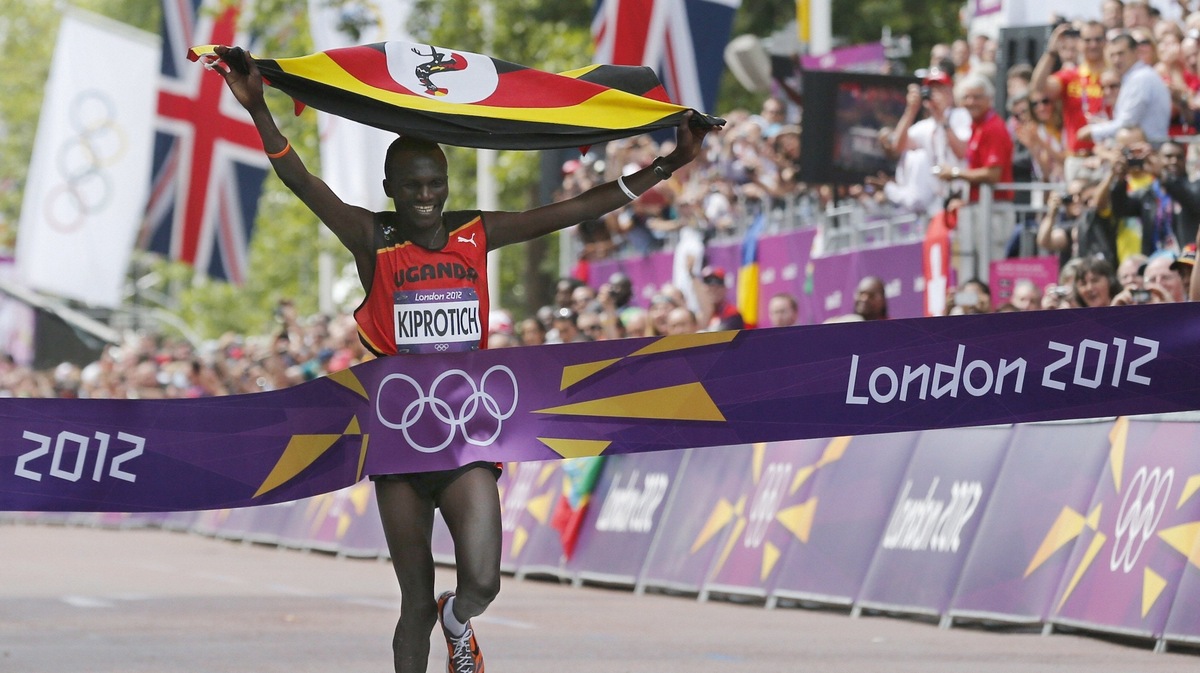 Uganda's Stephen Kiprotich wins the gold medal in the men's marathon at the 2012 London Olympics. As the impoverished country's second gold medalist in 40 years, Kiprotich became an instant national hero.

On the last day of the London Olympics, a Ugandan runner seemingly came from nowhere during the marathon to pass the favored Kenyan and Ethiopian athletes and win gold.

Stephen Kiprotich is the first gold medalist from Uganda since John Akii-Bua won the 400-meter hurdles at the 1972 Munich Olympics. In the last two weeks, Kiprotich has become an unlikely national hero in a struggling country that rarely has much to cheer about.

During an interview on a recent day, Kiprotich and one of his managers sit at a table on the lawn of a posh hotel in Kampala, the Ugandan capital, sipping tropical drinks beside the pool. A new, ill-fitting suit seems to swallow Kiprotich's 120-pound frame, which is so reedy that his countrymen compare him to elephant grass. 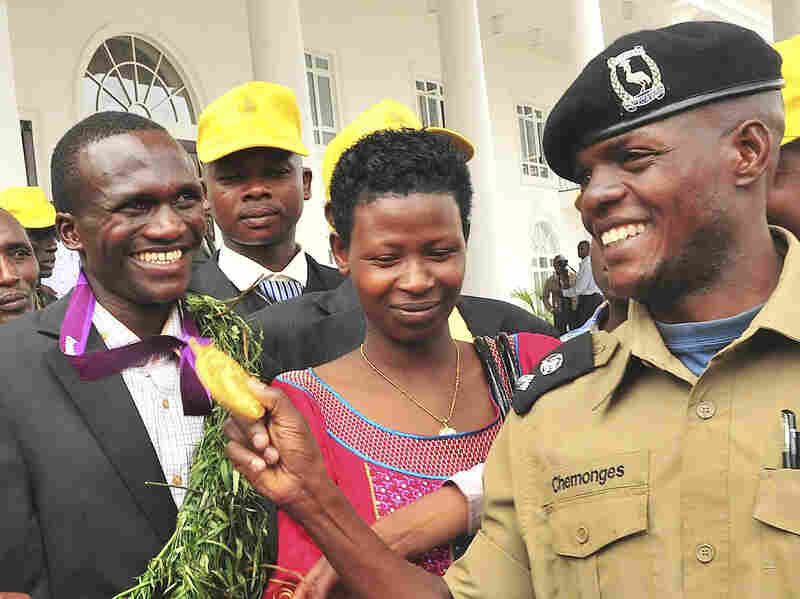 A Ugandan Army officer admires Kiprotich's gold medal at the president's residence, outside the capital Kampala, on Aug. 15. In the center is Kiprotich's wife, Patricia. Stephen Wandera/AP hide caption 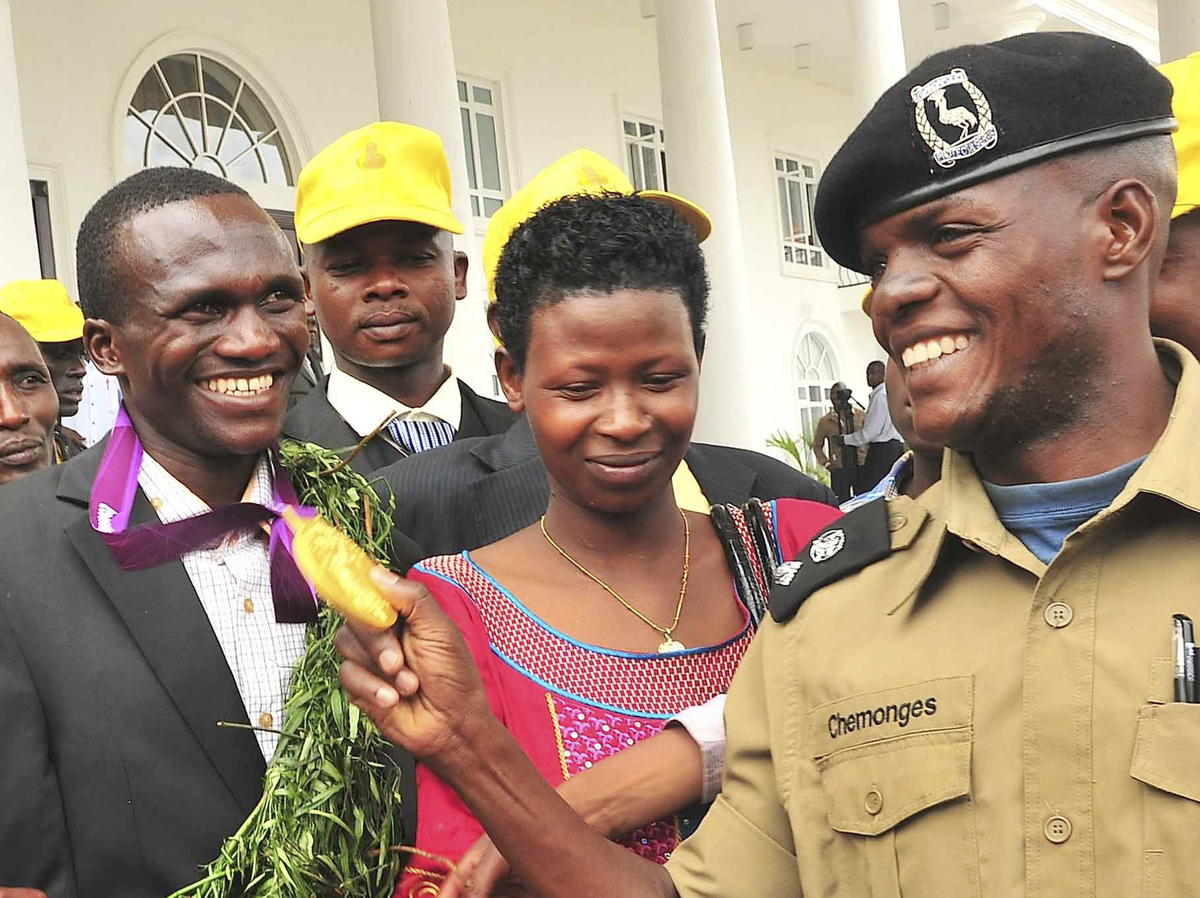 A Ugandan Army officer admires Kiprotich's gold medal at the president's residence, outside the capital Kampala, on Aug. 15. In the center is Kiprotich's wife, Patricia.

The shy 23-year-old is trying to remain relaxed during what's clearly a new experience: talking about his life.

"It has changed greatly," he says, clearing his throat. "Like before no one knew about me, but now I'm known worldwide."

Kiprotich has vaulted from an unknown runner born in a grass-and-cow-dung hut in a forest to a sports celebrity who is now a millionaire, at least by Ugandan standards.

President Yoweri Museveni awarded him 200 million Ugandan shillings, or about $80,000. And Kiprotich has reportedly received many times that in private and corporate gifts.

This week, the New Vision newspaper asked in a reader poll: "What should Golden Boy Kiprotich do with all of his money? Keep it in bank, invest or share with friends?"

"About the money, the money is OK," the polite, reserved runner responds. "What I'm after now is to pursue my career. I can't stop running because of this big money. I have to put in more efforts to bring in more money" — he corrects himself — "bring in more medals."

Next week, he says, he'll resume training for a Dutch marathon in November and next year's London Marathon. 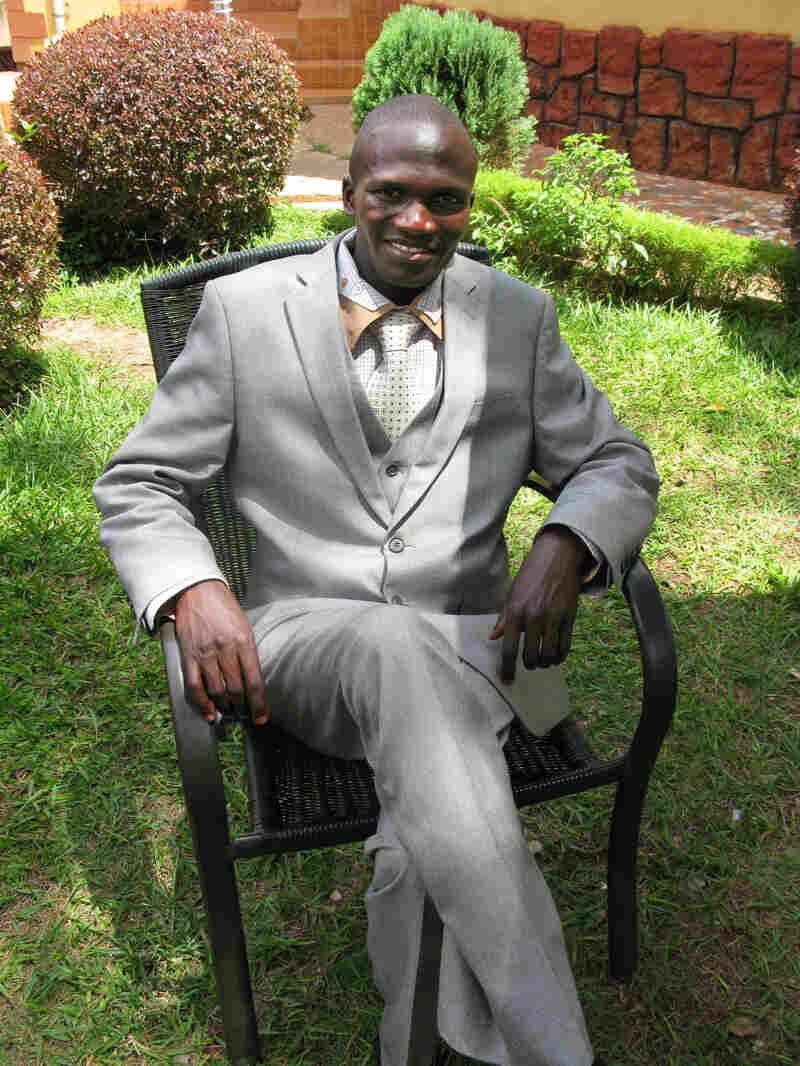 Amid the fame and fuss, Kiprotich says he ready to return to running full time. The president of Uganda has pledged to build training facilities in the country after Kiprotich had to travel to Kenya to train. John Burnett/NPR hide caption 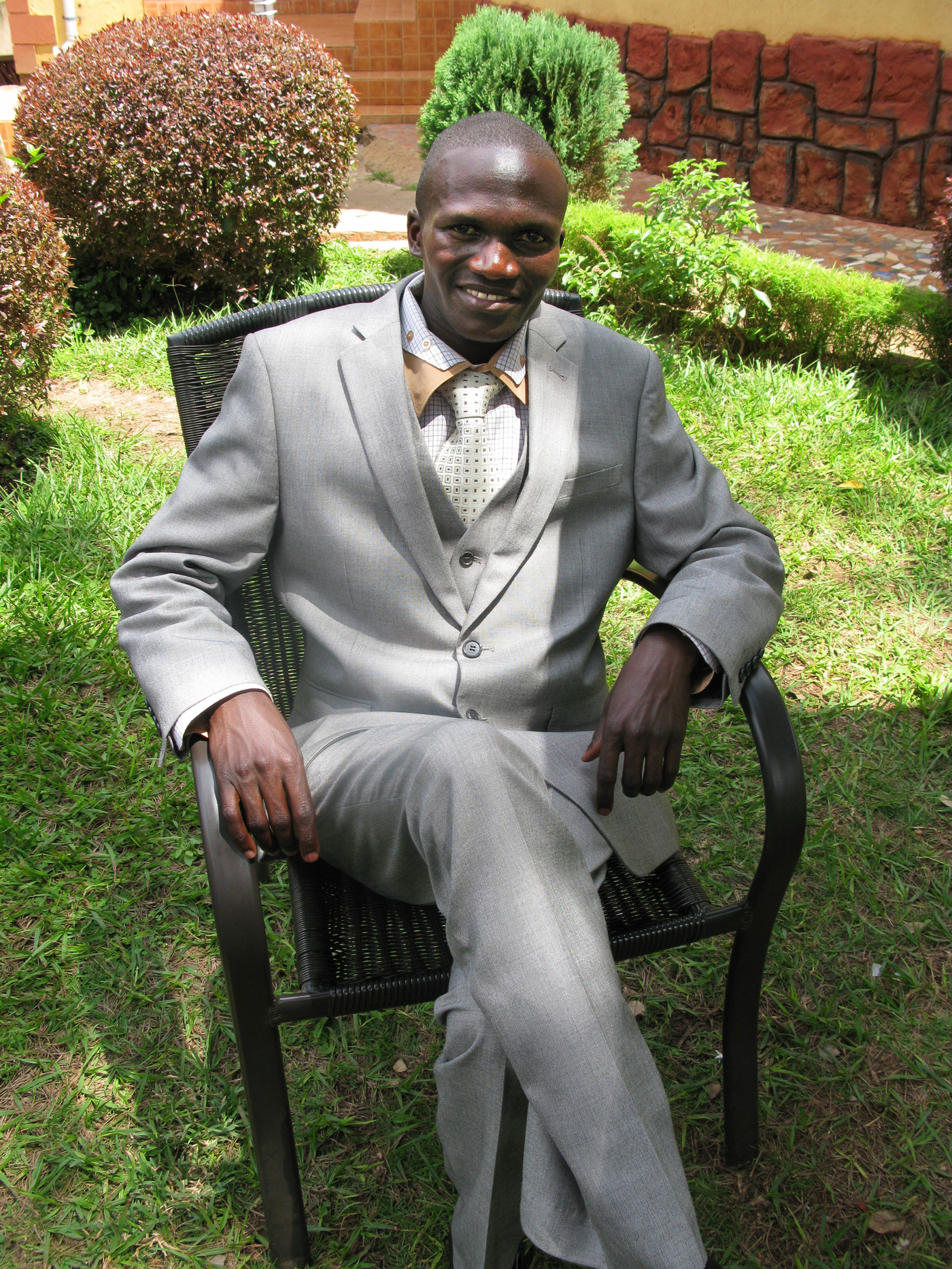 Amid the fame and fuss, Kiprotich says he ready to return to running full time. The president of Uganda has pledged to build training facilities in the country after Kiprotich had to travel to Kenya to train.

Kiprotich's rags-to-riches story has captivated residents of the country, where the annual per-capita income is less than $600 and where there's a shortage of heroes.

"I think the whole Uganda is so happy for what Kiprotich did for us," says Martha Nanyombi, a barista at the coffee shop in the hotel where he's staying. "When he came to the hotel I hugged him. I told all the people in the hotel Kiprotich was here. Everyone was happy; people came to take photos with him."

Ugandans are a little worried about how Kiprotich will handle his fame and fortune. Many know the tragic story of Samuel Wanjiru, the Kenyan marathoner who turned to alcohol and womanizing and died in a fall from his balcony last year in unclear circumstances.

Kiprotich says that won't happen to him.

"My wife is a believer and I'm a believer, too," he says. "We go to the Catholic Church and we will not allow such things to happen."

Hearing Uganda's national anthem — which is only a minute long — played at the Olympic medal ceremony was a great mood lifter in this perennially troubled East African country.

"Kiprotich ... injected life into the spirit of a fatigued, hopeless nation," wrote one newspaper columnist.

"You mention Uganda, and for many people it's Idi Amin, it's HIV/AIDS, ebola, it's Joseph Kony. But that's not all we are about as a country," he says. "To have Kiprotich at the closing ceremony with the entire world watching, it's as if the crowning moment of Olympics was for Kiprotich and Uganda."

Ugandans have been quick to jump on their government for its paltry support of aspiring athletes.

Kiprotich accomplished his victory entirely on his own. With no training facility in his own country, he went to neighboring Kenya and trained in Eldoret, home to many great runners from the Kalenjin ethnic group.

A sports management company paid for his room and board; out-of-pocket expenses came from his modest salary at the Uganda Prison Service, under whose aegis he runs.

The gold-medal winner has just been promoted to assistant superintendent, though he'll continue to run full time. The president has promised to build a high-altitude training facility in Kiprotich's village, as well as a proper home for his destitute parents.

Uganda's new hero — once all by himself — is suddenly surrounded by a team of managers, lawyers and public relations people, including his former boss at the prisons service, Kumakech Godfred.

"As of today," Godfred gloats, "Stephen is worth billions of shillings."

As for the bewildered young marathoner, he seems as if he can't wait to pull on his track shoes again and be done with the celebrity fuss.

Asked if he had seen his new Wikipedia page, Uganda's favorite son replies: "Huh? I don't understand what you're saying."