Accessibility links
Maine's Needhams: A Sweet Treat Of Earthy Potatoes Needhams are a traditional Maine candy made with chocolate, coconut and an unlikely state staple: potatoes. Maine's official state treat is the whoopie pie, but many still look fondly on the coconutty goodie their grandmothers used to make. 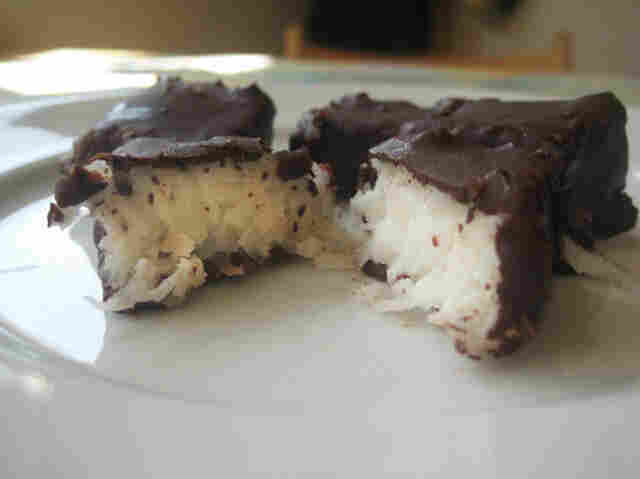 A traditional sweet treat from Maine, needhams are made with coconut, chocolate and real Maine potatoes. Courtesy of Jones Franzel hide caption 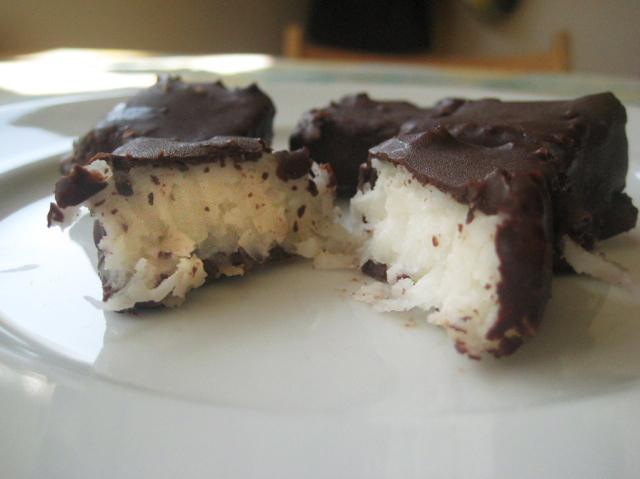 A traditional sweet treat from Maine, needhams are made with coconut, chocolate and real Maine potatoes. 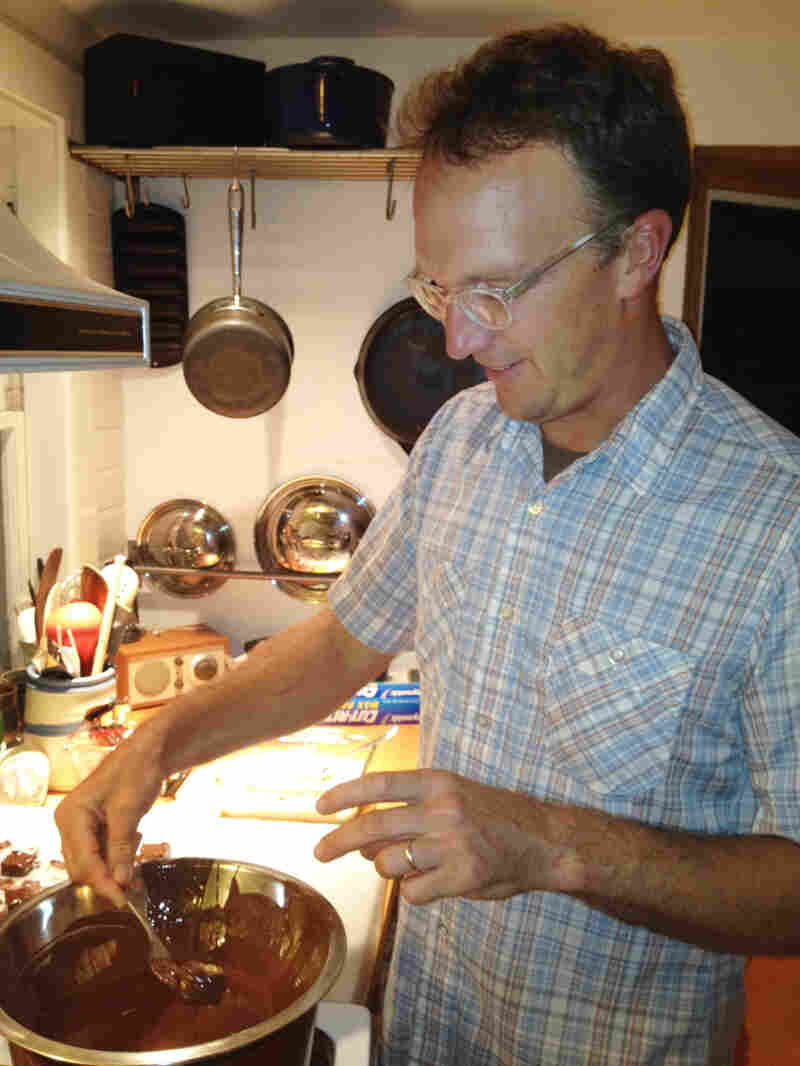 Jon Courtney makes needhams in his kitchen with potatoes from his own garden. Patty Wight for NPR hide caption 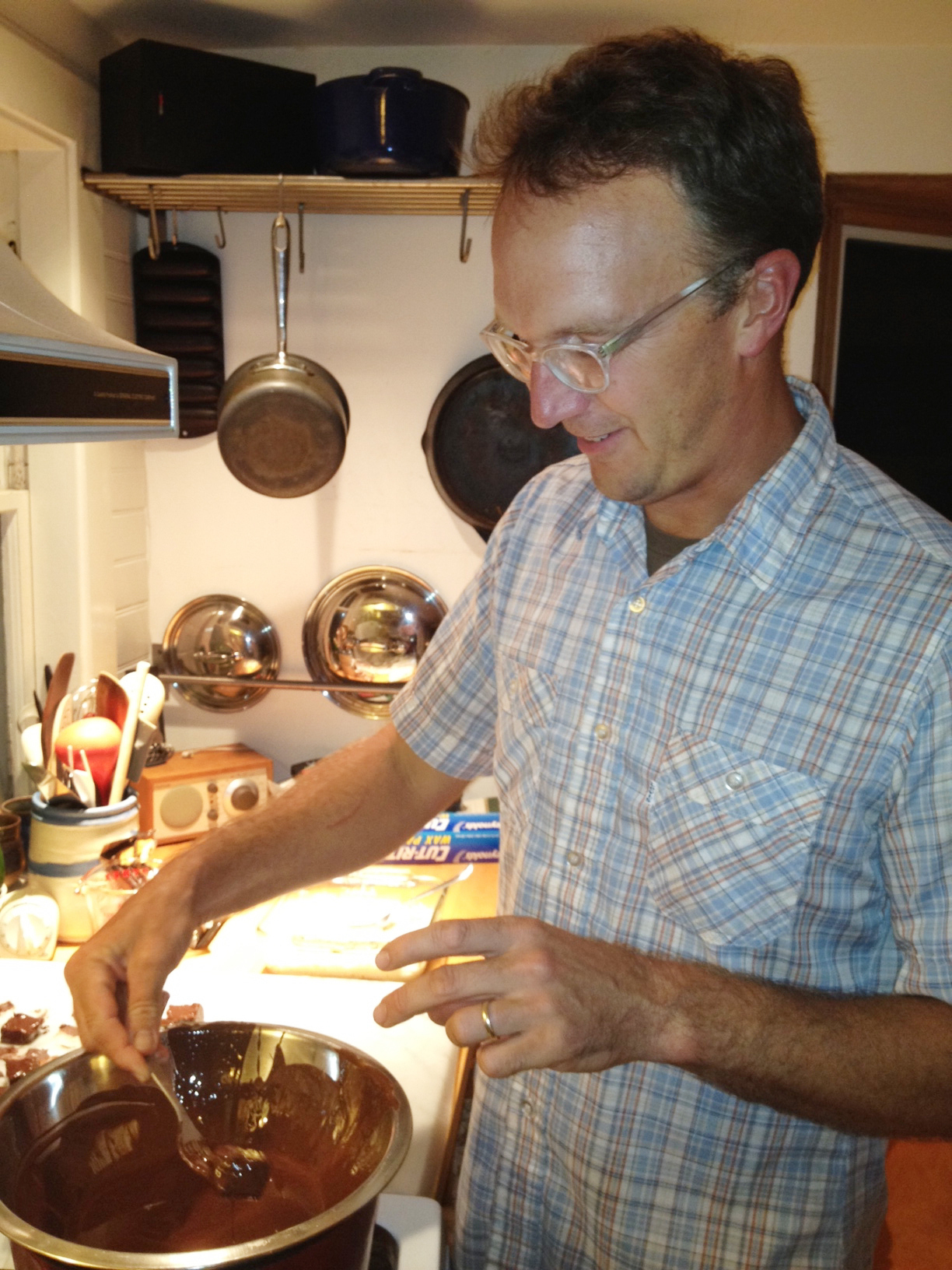 Jon Courtney makes needhams in his kitchen with potatoes from his own garden.

If you're from Maine, odds are you've heard of needhams — a traditional sweet with a surprising ingredient.

While Maine is famous for its sweet blueberries and maple syrup, it has another, more earthy, local crop: potatoes.

"Basically it's coconut and sugar dipped in chocolate," Courtney says. "So if you were to pick one up, you'd be like, 'Oh! This is a homemade Mounds bar.' "

Almost ... just with potato mixed in to bind the coconut together. Intrigued, Courtney decided to make his own. Now needhams are his secret weapon at potlucks.

The origin of needhams is hazy, but lore centers around the late 1800s and a Rev. Needham. He either brought the candies to church as an incentive to get people to attend, or he was so popular that a local candy maker named the treat after him.

The needham may go way back, but Courtney says they've been upstaged by another Maine treat in recent years.

"Everyone still makes whoopee pies — that's the gorilla in the room in the Maine sweet world," Courtney says. But, he says, the needham has a nostalgia edge that still surprises people.

"The needhams are a little more obscure," he says. "So I think most people are like, 'Oh! I haven't seen these for a long time,' or, 'I don't know people who actually make them,' or, 'My grandmother used to make them.' "

To make his version, adapted from a recipe online, Courtney starts in his own garden. He digs until he's got a handful of potatoes, then it's into the kitchen to boil and mash. Next, he adds other essential ingredients: a bag of flaked coconut, melted butter, a little vanilla and a bit of Maine salt.

Finally, Courtney adds powdered sugar and stirs it all together with the help of his daughter Nora, who gives the heavenly mix a good stir.

Courtney dumps thick clouds of the potato-coconut concoction into a square casserole dish, spreads it into an even layer, then puts it in the refrigerator to cool.

While the mixture's cooling, he drops baking chocolate and chips into a bowl perched over a pot of boiling water, along with a square of paraffin that will later harden the chocolate.

Slicing the cooled coconut mixture into one-inch squares, he then dips them into the shiny melted chocolate. They look like bite-sized chocolate gifts, ready to be enjoyed.

I don't taste the potato, but Courtney says that's the idea.

"It's less about tasting potato," he says, "and more about that it's just not really gummy and cloyingly sweet."

That's the gift of the humble potato: a perfect balance of sweetness and texture.