Accessibility links
Palestinians Flood Into Israel, If Only Briefly Israel has allowed relatively few Palestinians to visit in recent years. But for the holy month of Ramadan and the holiday that followed, Israel loosened security restrictions and allowed 1.2 million Palestinians to enter. 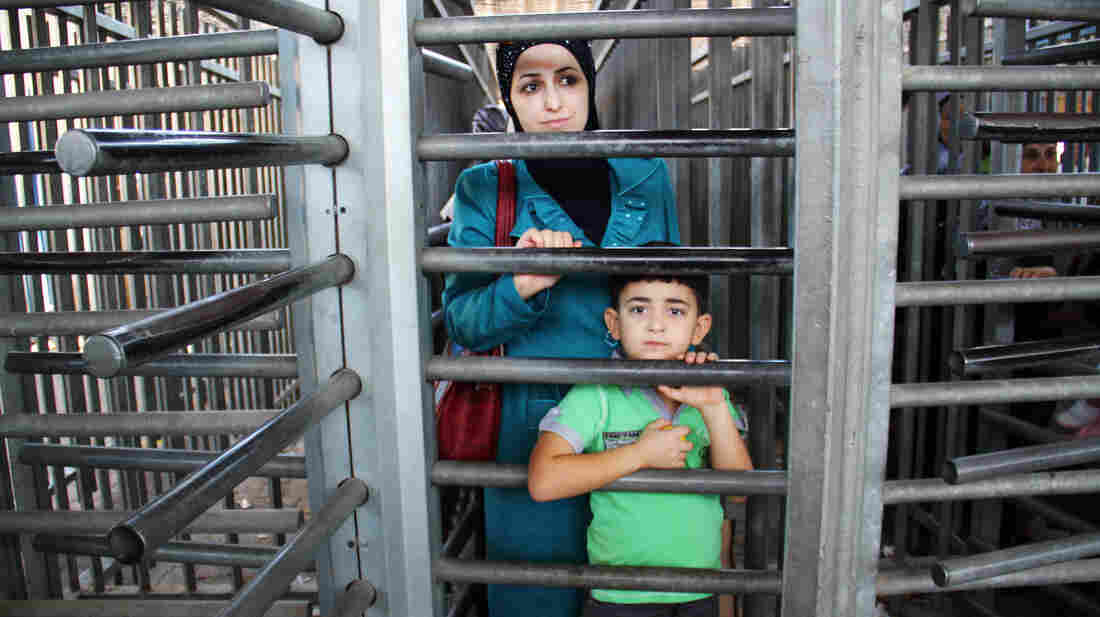 A mother and son wait to enter Israel through the Qalandia checkpoint, which separates the West Bank and Jerusalem. Most of the year, Israel permits relatively few Palestinians to visit, but over the Muslim holy month of Ramadan, 1.2 million Palestinians were allowed in. Daniel Estrin for NPR hide caption 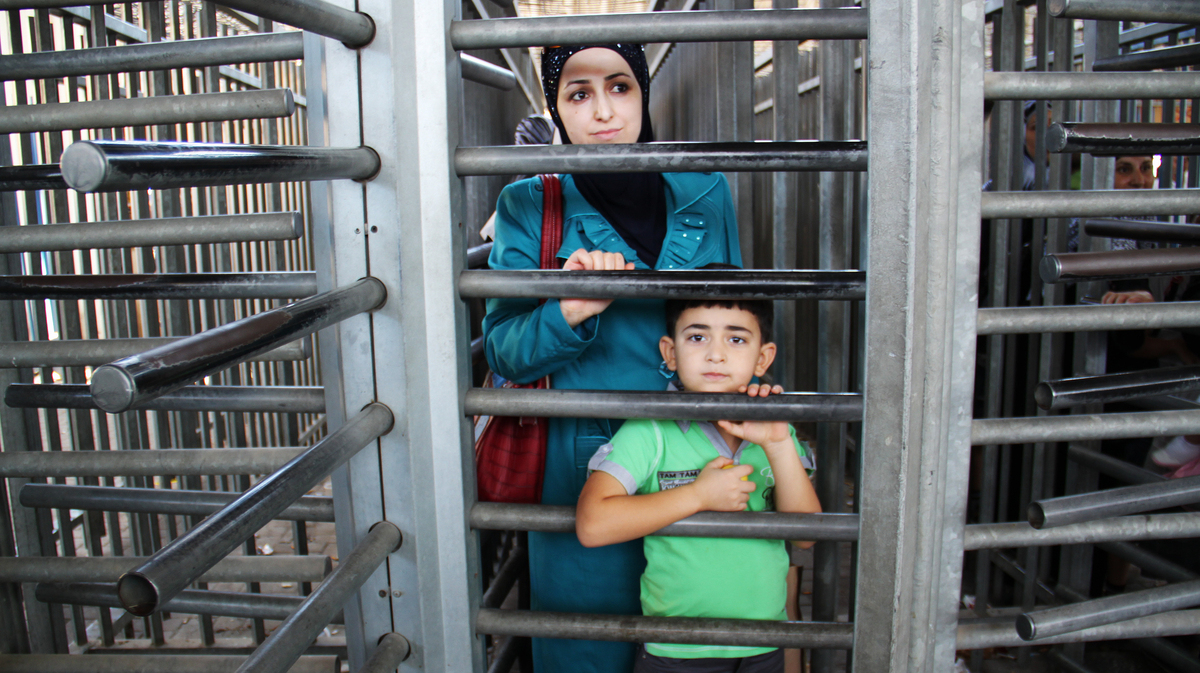 A mother and son wait to enter Israel through the Qalandia checkpoint, which separates the West Bank and Jerusalem. Most of the year, Israel permits relatively few Palestinians to visit, but over the Muslim holy month of Ramadan, 1.2 million Palestinians were allowed in.

As Palestinian Muslims in the West Bank celebrated the end of Ramadan this past week, many traveled to a place that's usually off limits: Israel.

At the main Israeli checkpoint between the West Bank and Jerusalem, you could hear the taxi drivers offering to take Palestinians to the beach in Tel Aviv.

The drive is no more than an hour from the West Bank boundary to Israel's Mediterranean coast. Yet many Palestinians have not taken a dip in years, if ever.

Back in the 1990s, when Israelis and Palestinians were holding peace negotiations, more than 100,000 Palestinians from the West Bank and the Gaza Strip entered Israel every day. Most came to work, but also to shop, study, visit relatives or go to the beach.

But after the Palestinian uprising began in 2000, Israel systematically cut back on the number of Palestinians who could enter Israel, and now relatively few can enter.

"After years of Palestinian attacks, terror attacks against Israel civilians, the government of Israel decided no more. No one enters here without a reason. In order to get to Israel, you need a reason," says Ofer Meital, a lieutenant colonel in Israel's army.

Some Palestinians still get permits to work or to visit hospitals in Israel. The permits are now hard to come by, though this past month was an exception. 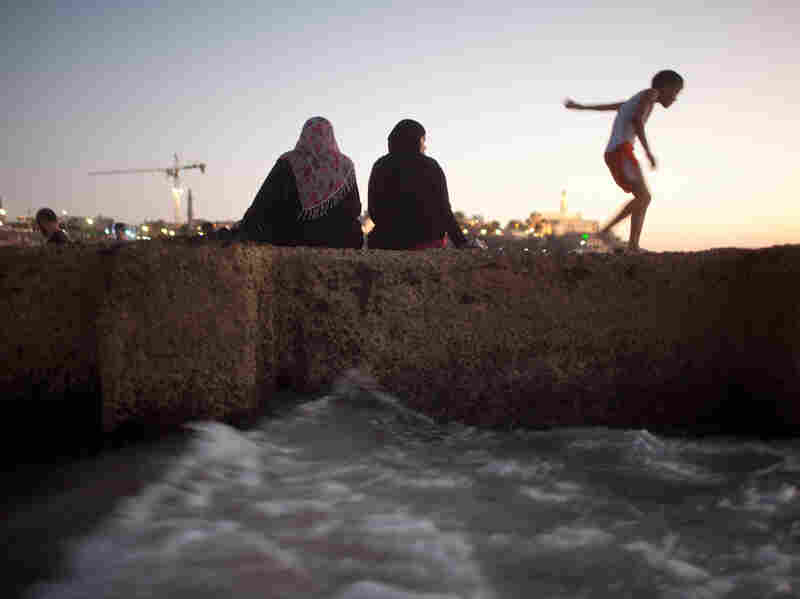 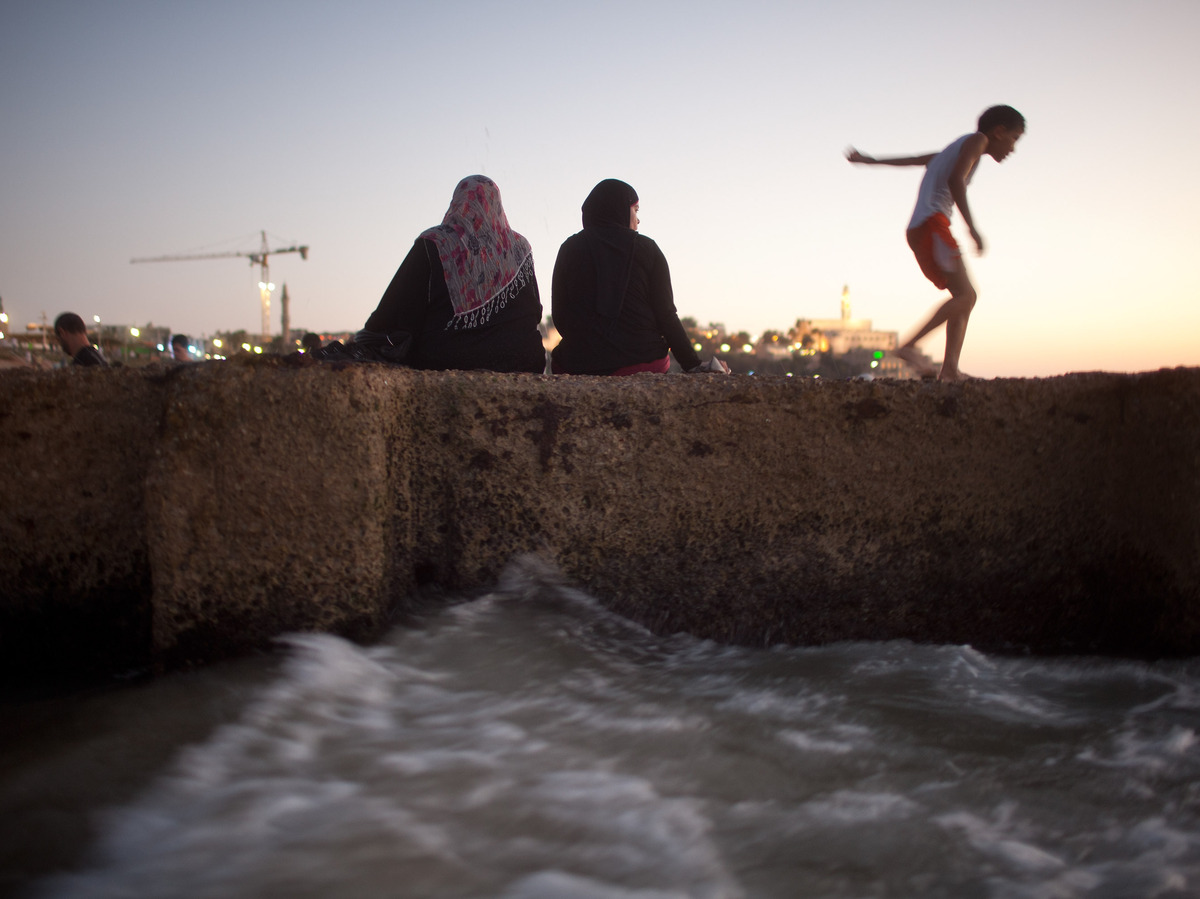 Palestinians enjoy a day at a beach last week. Many West Bank Palestinians allowed into Israel in recent weeks headed to the Mediterranean shore.

Opening The Doors For The Holiday

One morning last week, hundreds of Palestinians lined up at the Qalandia checkpoint on the edge of Jerusalem, clutching their permission slips.

Majida, a 20-year-old from Ramallah, waited in line with her husband. They were headed straight to the Mediterranean, which Majida had never seen. She spoke about Israel as if it were a faraway land.

"I heard the shopping there is wonderful," she said.

One Israeli mall manager reported Palestinian shoppers this week gave his stores a 10 to 50 percent spike in sales. At an outdoor mall in Jerusalem, Israelis were browsing alongside Palestinians.

Rana Matour, 40, was checking out a pair of khaki pants at The Gap, a store she had never been able to shop in before. Her West Bank home in Ramallah is just a 20-minute drive from Jerusalem, but this was the first time since the 1990s that she had received a permit to visit.

Asked what it felt like to be in Jerusalem, she said, "After 15 years, to come for first time, it's good, nice."

Across from The Gap, the Israeli cashiers at Abercrombie and Fitch say they've seen a lot of Palestinians come through their doors this month. Reactions are mixed.

"It's good they are coming in. They have to live, also," said another.

In addition to issuing special permits for Palestinian visitors to Israel, authorities also let in large numbers of Palestinians who wanted to attend prayers at the Al Aqsa Mosque in Jerusalem, one of the holiest sites in Islam.

The mosque compound is in East Jerusalem, and the Palestinians are seeking this part of the city as the capital for a future state. Israel, which captured East Jerusalem in the 1967 Mideast war, claims all of Jerusalem as its capital, though this is not recognized by any other nation.

All together, Israel recorded 1.2 million Palestinians visitors this past month. That's about 40 percent of the entire Palestinian population in the West Bank. The army says there were some thefts by Palestinians, but no attacks.

So why aren't more Palestinians allowed into Israel the rest of the year, asks Saeb Erekat, the chief Palestinian negotiator.

"If 1.2 million Palestinians were allowed to enter Israel, the question about so-called security is not valid," he says.

The Israeli army says it stepped up security significantly during the Ramadan period and can't afford to stay at that level all the time. Now, with the holiday over, the Palestinian permits have expired and the Tel Aviv beaches and Jerusalem malls are no longer packed with Palestinians.