Accessibility links
Afghan Women Fear Backsliding On Key Gains Women in Afghanistan are, in general, better off today than when the Taliban ruled. But activists say there has been backsliding on the gains of the past decade. And as the international community plans its drawdown, activists worry that the government won't do its part to protect women. 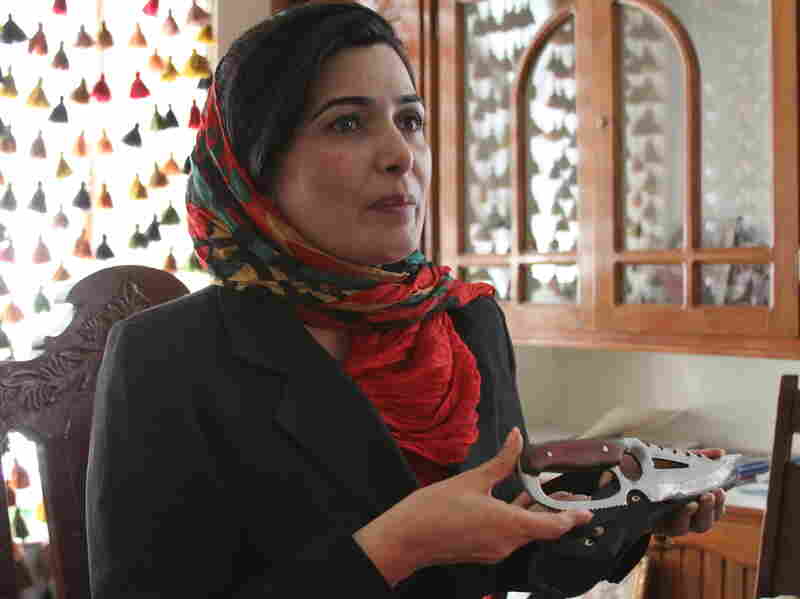 Soraya Paksat of Voice of Afghan Women holds a knife that was confiscated from a woman who came to visit a young relative in one of the group's shelters. The woman intended to kill the girl for fleeing an abusive father. Sean Carberry/NPR hide caption 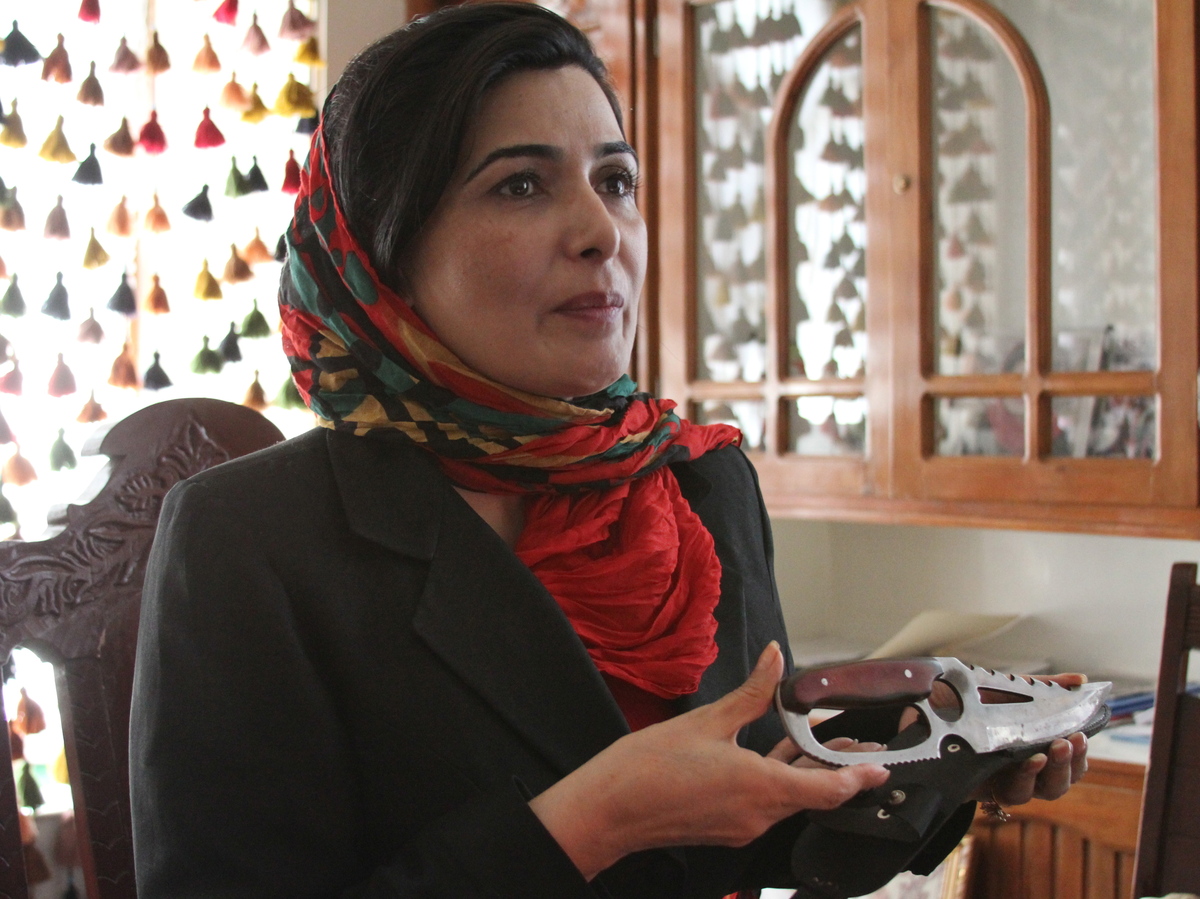 Soraya Paksat of Voice of Afghan Women holds a knife that was confiscated from a woman who came to visit a young relative in one of the group's shelters. The woman intended to kill the girl for fleeing an abusive father.

The gains by Afghan women are seen as one of the country's most important achievements over the past decade. But as the international community draws down its military and aid presence, those hard-won gains are at risk of being lost, according to activists.

Women are still being beaten, raped and forced into early marriage at alarming rates. And women's advocacy groups say they are already seeing signs of backsliding by the government when it comes to protecting women, and fear this could accelerate in the coming years.

Women for Afghan Women, which runs shelters and advocacy programs, has helped thousands of victims of violence and abuse over the past decade. One of its current cases involves a 16-year-old girl they call Peri.

Peri looks short for her age. She has a pretty face with sad, brown eyes.

Speaking in a detached manner, Peri says when she was 3, her father was accused of killing a member of another family in her village. In a traditional compensation, Peri was given to the family of the victim. It's a process called baad. It's illegal but very common.

Her story gets worse. She says that when she was 10, she was raped by a man in that family, and afterward she was forced to marry a boy in the same family who was also around 10. One day when she was 14, she says, she was drugged and when she came to, she was told she had been divorced. She never saw her husband again.

A year later, Peri was forced to become the second wife of another man who regularly abused her. The other wife threatened Peri and ultimately forced her to leave the house. Peri then tried to kill herself in the street. A man stopped her and brought her to the police, who took her to a shelter.

With the help of Women for Afghan Women, a case has been filed against Peri's husband and brother-in-law. They are being charged with rape, forced marriage and abuse.

But the prospects for justice in this case are not good, says Huma Safi, the program manager for Women for Afghan Women, which is based in New York.

"The most corrupt system in our country is the system of justice," Safi says. "We have good laws. They are very good ... written in the documents, but they are not good in the implementation."

In another case, a woman was raped by an Afghan policeman, Safi says. A court sentenced him to seven years in jail. But the appeals court changed the charge from rape to adultery, freed the officer and sent the woman to jail for three years.

"It's very difficult for a woman who is uneducated, staying in a very remote area of the country, to have proof," Safi says. She says cases are often dismissed or lost because women can't provide evidence of the crimes against them. 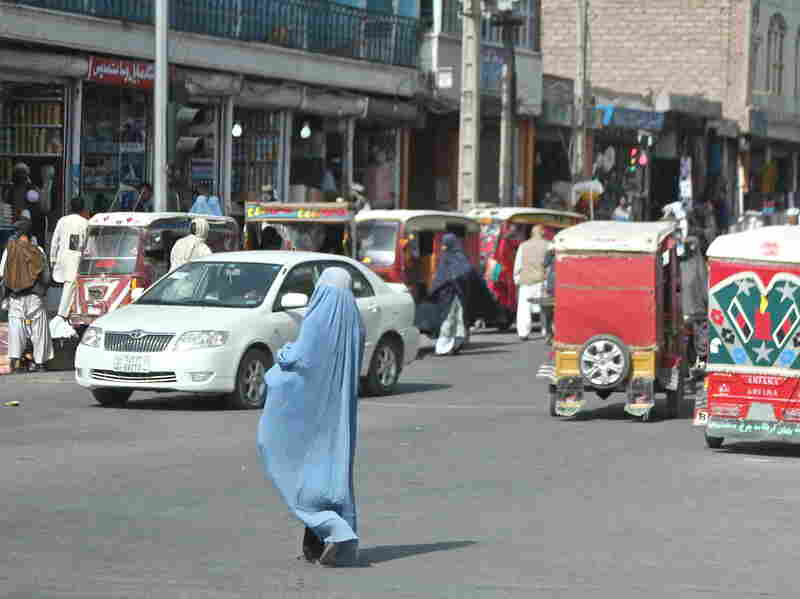 A woman crosses the street in Herat, Afghanistan. Burqa-clad women stand out on the streets in Afghanistan â both because of their bright blue burqas, and because there are far fewer women in public than men. Sean Carberry/NPR hide caption

Many of these cases are handled through tribal or informal justice systems that are often heavily slanted against women. But through persistence, Safi says, some measure of justice is achieved. Usually, it comes down to the individual judge making the decision.

She says there are a few sympathetic judges, lawyers and advocates. However, they can face constant threats, like Soraya Paksat, who works for a women's rights organization in the western city of Herat.

The Voice of Afghan Women was founded secretly during the years that the Taliban ruled, from 1996 to 2001. Recently, the women's group intervened in a case where an Afghan local policeman and two others kidnapped and raped a 17-year-old girl. The group pushed for prosecution, and as a result, the men received long prison sentences. Now, the judges and advocates like Paksat are receiving death threats.

"What I received from that threat was three bullets in one envelope [sent] to my home — just a message," says Maria Bashir.

"My children can't go outside the house, and I always have to be escorted by security personnel," Bashir says.

Bashir tries to focus on positives. She says that more and more women are becoming aware of their rights and seeking justice. However, she's also seeing men become more angry and abusive toward women who try to assert their rights.

Keeping Women's Rights On The Table

Bashir is concerned that when foreign forces leave, women will lose protection. Plus, she and others fear that the government is already starting to chip away at women's rights.

"If there is a political solution between Taliban and government and Hizb-i-Islami, there is no doubt that they will not accept the article on women's rights in the constitution," Bashir says.

But Salahuddin Rabbani, who heads the High Peace Council, a group seeking reconciliation in Afghanistan, says there will be no deals to rework the constitution or sacrifice women's rights in exchange for peace with the Taliban.

"This is something that is nonnegotiable," he says.

However, women's advocates say the current government is still backsliding and not enforcing the laws as it was a couple of years ago.

Paksat says women's rights have been treated as a cause, rather than as a pillar of Afghan government and society. That makes women more vulnerable as the international community pulls back.

In a recent speech, Afghanistan's justice minister called women's shelters dens of prostitution, and declared that girls are ready for marriage by age 12. Safi, in Kabul, says she was shocked to hear such comments from a government minister.

"For me, there is no difference between that Talib who is fighting and a minister who is saying such a thing," she says.

This raises another issue. While there is a constant threat of violence against women from the Taliban or other insurgents, women like Safi say that it's those who are supposed to uphold the law who are often breaking it.

"Day by day, we see the local commanders are very powerful, and most of the abuses come from those people who are working with the government — they're not Taliban," Safi says.