Accessibility links
Michigan Author Dreams Up A Deadlier Ann Arbor Ann Arbor residents would easily recognize their city in Harry Dolan's crime fiction, but the likeness ends with murder; while Dolan can pack several homicides into each book, the real Ann Arbor is much more peaceful.

Ask Harry Dolan to take you for lunch at a restaurant he's written about, and he won't disappoint. In downtown Ann Arbor, Mich., on Liberty Street, the vegetarian restaurant Seva serves mushroom sliders and yam fries that both the crime writer and his characters are quite fond of. With any luck, you'll also catch the perfect song playing in the background — "Psycho Killer" by the Talking Heads.

Dolan's David Loogan crime series follows the editor of a mystery magazine who's always finding trouble. He says he wanted a thoughtful, intriguing place to set his stories, and Ann Arbor, a university town of about 100,000, was a perfect fit. 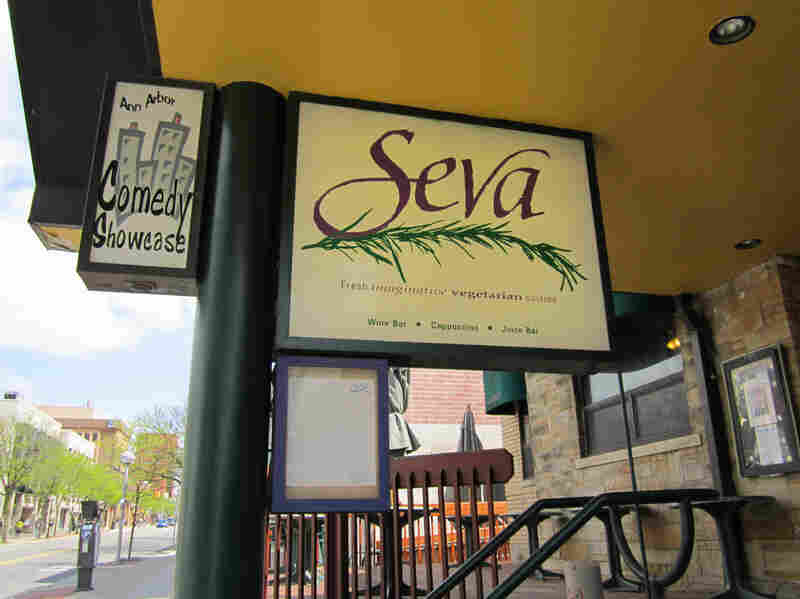 In Very Bad Men, Seva is Sen. John Casterbridge's favorite restaurant. Dolan won't say if he's a good guy or not, because "that would be giving it away." Vasenka via Flickr hide caption 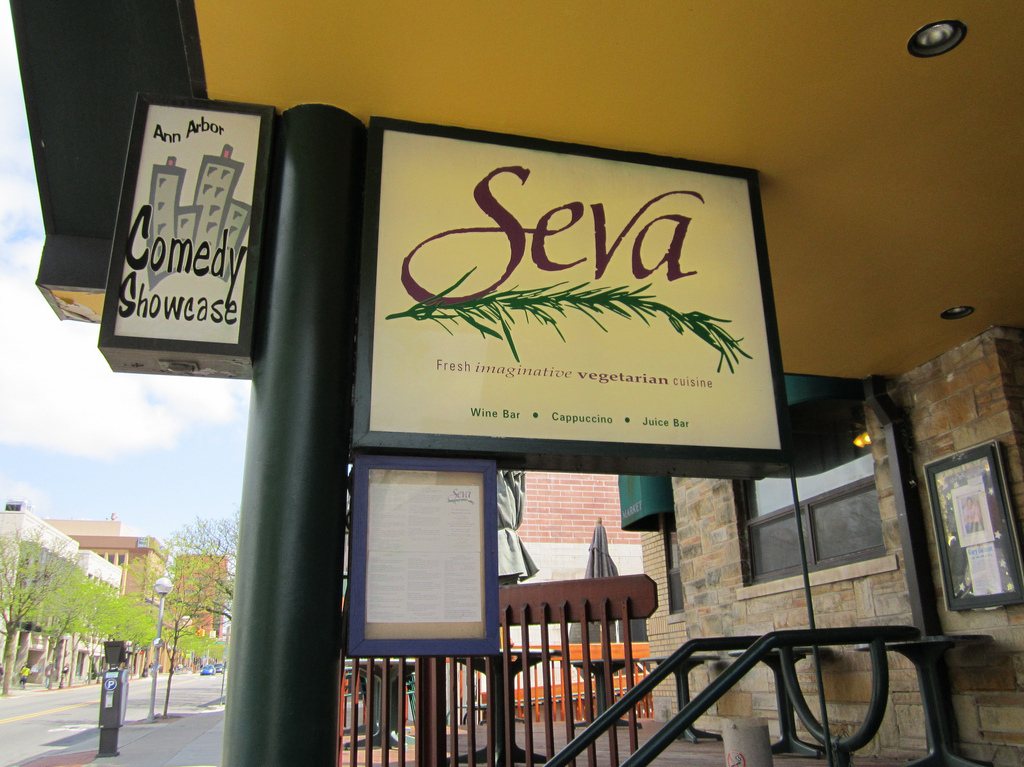 In Very Bad Men, Seva is Sen. John Casterbridge's favorite restaurant. Dolan won't say if he's a good guy or not, because "that would be giving it away."

A few blocks down Liberty, a writer's landmark stands empty.

"This is the flagship store of the Borders book chain, which originated here in Ann Arbor," Dolan says. "They went out of business last year."

Dolan had his first-ever reading at this store, when his first Loogan novel, Bad Things Happen, came out in 2009. To say he was excited would be an understatement.

"Oh, yeah," he says, laughing. "I remember coming here and seeing a picture of the book in the window, a big poster advertising it."

Dolan had spent a lot of time in the store's crime fiction section. He bought some books and looked through others in an effort to learn structure and how to develop characters. One of the biggest takeaways, he says, was recognizing the need for a reluctant hero. Dolan's turned out to be Loogan.

Murder In A Peaceful City

"David Loogan is 39 years old, about 6 feet tall," Dolan says. "He has copper-colored hair, and Elizabeth thinks he has an interesting mouth."

Elizabeth is Loogan's sidekick. By the second book, Very Bad Men, they're living together. It's convenient that she's a detective with the Ann Arbor Police Department — a detective who, in fiction at least, sees a lot of action.

"I remember a reviewer of the first book that I published, Bad Things Happen, counted up the number of murders in the book, and it came out to eight or nine, and that's over a period of a month or so," Dolan says. 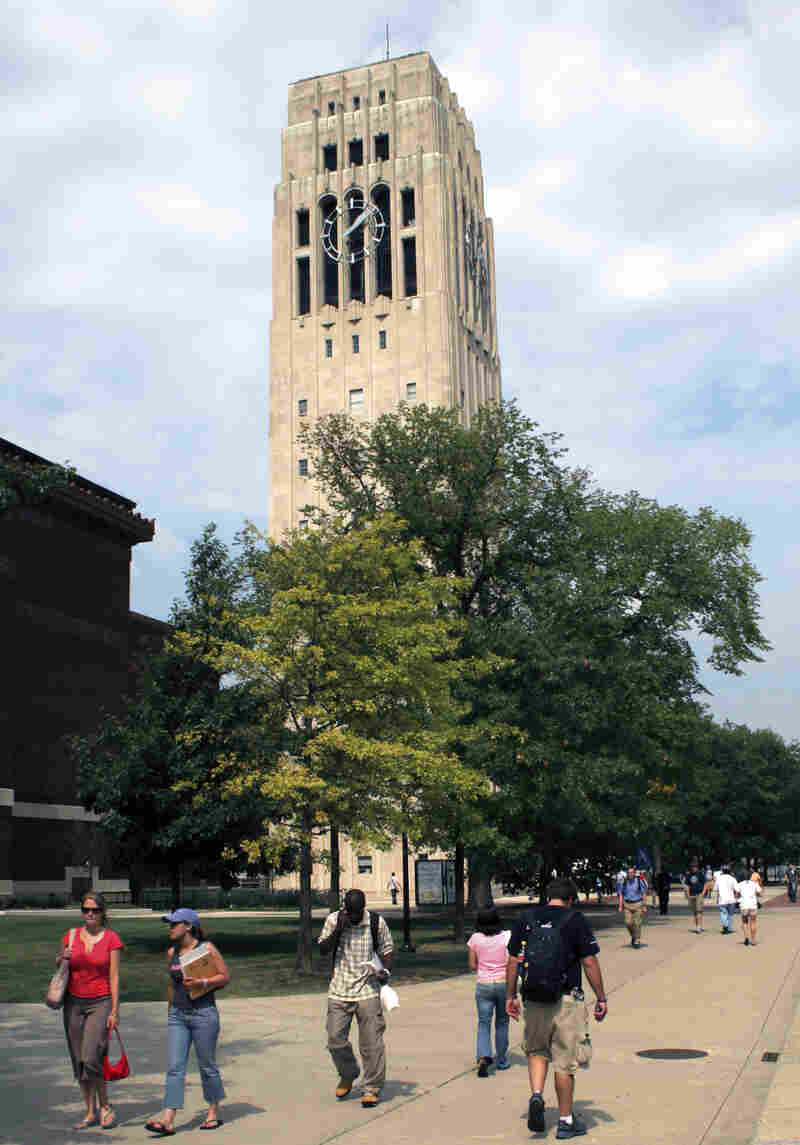 The University of Michigan's carillon bells ring out from the Burton Memorial Tower every day that classes are in session. Steve Pepple/AnnArbor.com/AP hide caption 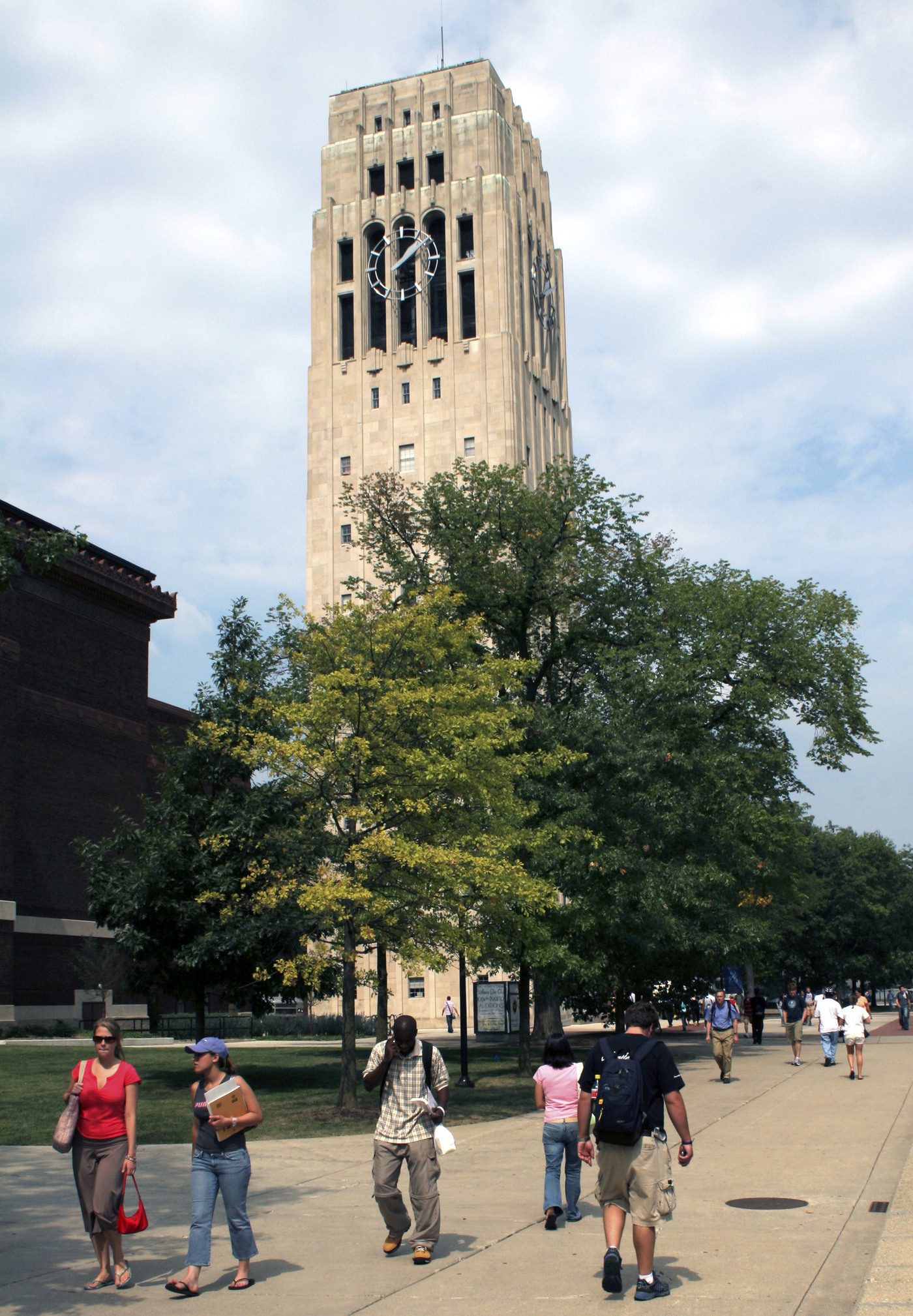 The University of Michigan's carillon bells ring out from the Burton Memorial Tower every day that classes are in session.

The real Ann Arbor doesn't see nearly that many murders. Rich Kinsey, a retired Ann Arbor detective who spent 13 years on the homicide squad, says the city is pretty safe, but it can be dangerous. Serial killers have come to town. After all, Kinsey says, there are plenty of pretty young girls walking around. He says the murders that do happen in Ann Arbor can be especially brutal.

"We had a guy, he had killed his ex-girlfriend and placed her in a deep freeze," Kinsey recalls, "and then brought the [freezer] to his new girlfriend's house [and] put it in the basement."

The Charm Of A College Town

Anyone who went to school in Ann Arbor is well acquainted with the sound of the Burton Memorial Tower's carillon bells, which can be heard from the streets of downtown. The University of Michigan's central campus stretches out to the south and to the east of the bell tower.

Thirteen years ago, Dolan moved to Ann Arbor from Ohio. He wanted a big university town — an intellectual, artistic community. He'd decided to become a writer, and these were the people who would appear in — and hopefully also buy — his books.

Driving past the football stadium, or The Big House, and out onto South State Street, Dolan stops at an apartment complex.

"This is building 650 right here, which is where I lived when I first moved to Ann Arbor," he says. "I had a basement apartment in the back of the building."

Dolan's first apartment had almost zero natural light and bare concrete walls. It became the setting in his latest book for a bloody battle between three desperate men that ends with someone getting impaled on a tire iron. It's one of the most violent scenes Dolan has written.

The Man Who Brings A Knife To A Gun Fight

A mile or so farther down South State Street, there's a hotel parking lot where Dolan's protagonist, Loogan, gets shot in the stomach. Very Bad Men includes a caution about parking lots and how dangerous they can be: 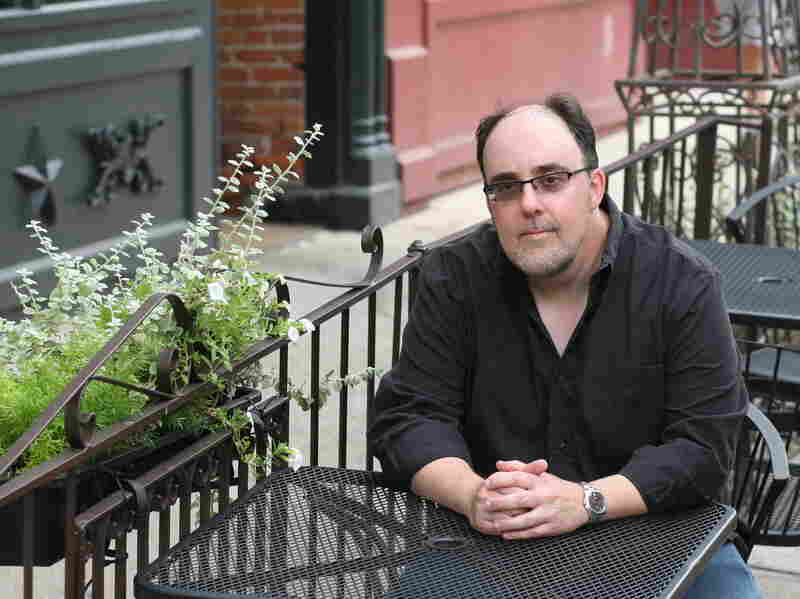 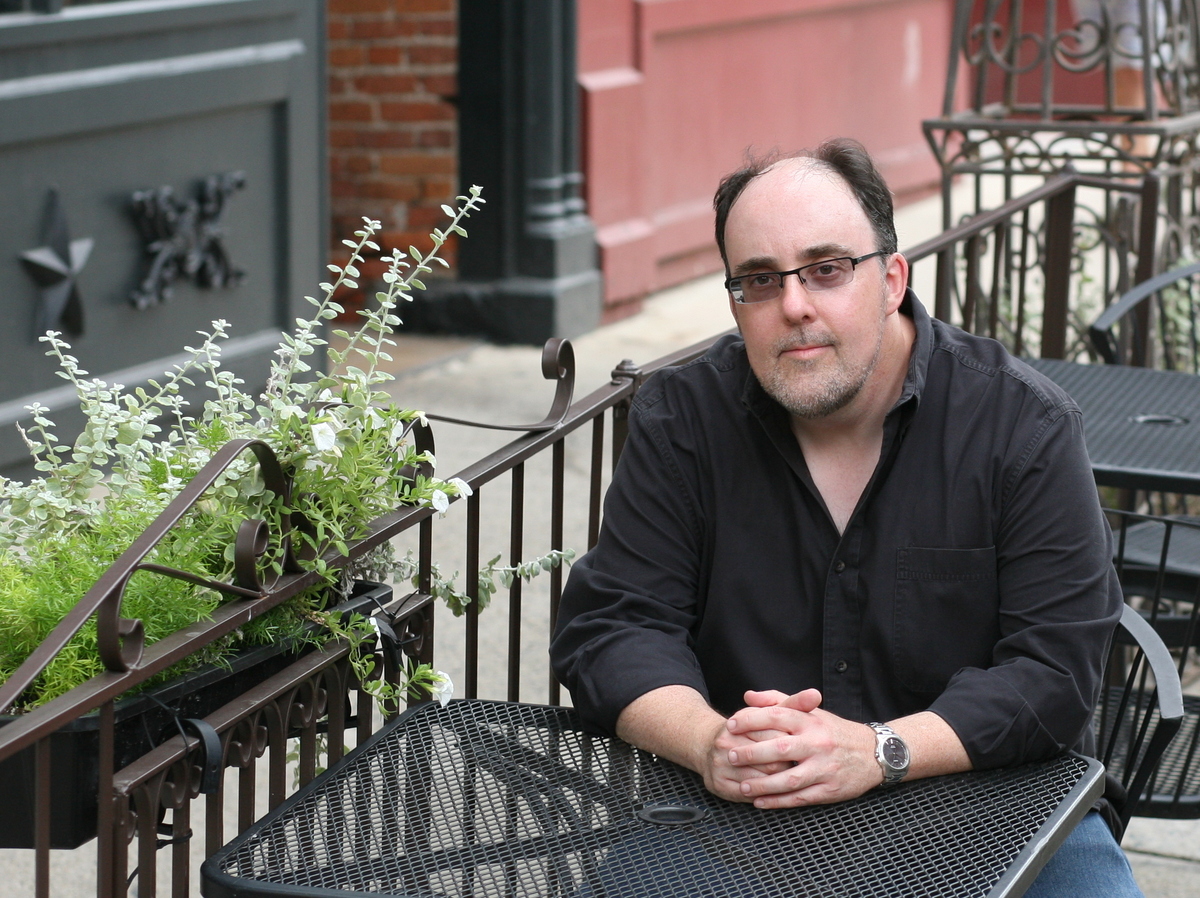 "If someone comes knocking on your door and he seems a little off, if he's ill-groomed and shabbily dressed, you can refuse to let him in. If he hangs around, you can call the police. But if you see the same guy in a parking lot, you're out of luck. There's nothing to be done."

In this particular encounter, Loogan has only a Boy Scout knife to defend himself with — he has literally brought a knife to a gun fight.

"David is a magazine editor, and he's not used to going around carrying guns," Dolan says. "He actually has to borrow a gun from a friend in the book. He doesn't own a gun. He's not a cop; he's not a detective. He's not expecting to find himself in trouble."

Loogan works in an old-fashioned kind of private eye's office, with a frosted-glass door and a bottle of Scotch in a bottom drawer. He's the editor of a mystery magazine, but a knock on the door often means trouble, and it's never long before Loogan launches off along complex plot lines that only come together when Dolan wants them to.

Back on the street, not far from that fictional office, Adrienne Berry, a saxophone player and former union organizer, considers the question of whether Ann Arbor even needs its own crime series. She decides that it does.

And after two novels, Dolan is still peeking into those secret pockets — his third Ann Arbor book, The Girl in the Rain, is due out next summer.