Accessibility links
In Distressed Syria, Urban And Rural Cultures At Odds The revolt began in the countryside, but it is now concentrated in two main cities: Damascus and Aleppo. While poor Syrians are flooding refugee camps on the borders, the middle- and upper-class civilians can pay to cross. Despite tension, some are seeking ways to build a post-Assad future together. 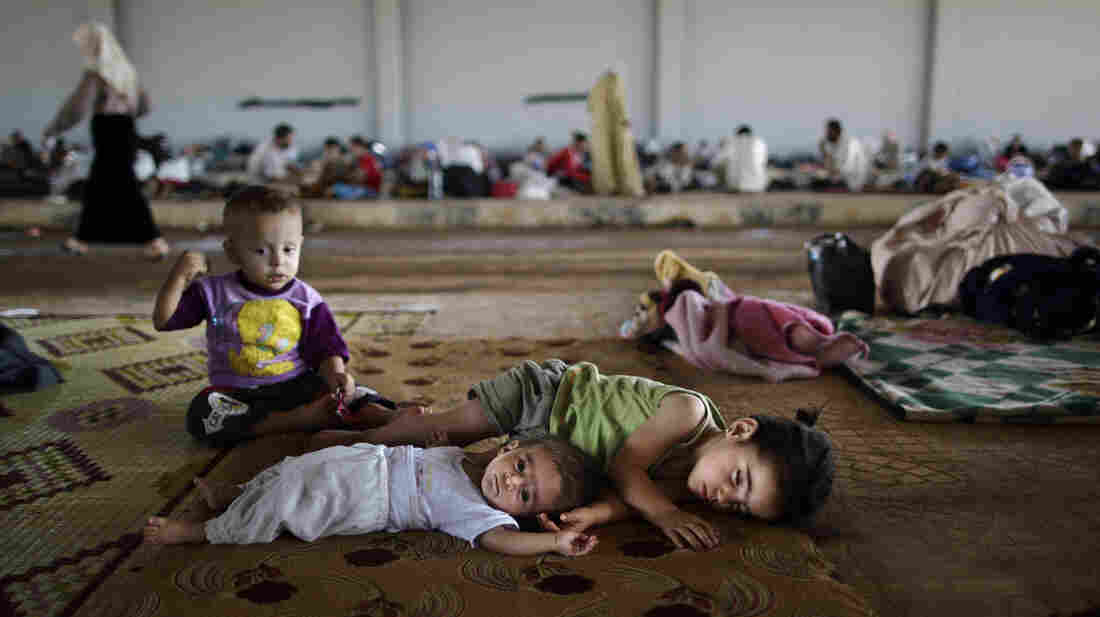 Syrian children, who fled their home with their family, take refuge at the Bab Al-Salameh border crossing, in hopes of entering one of the refugee camps in Turkey on Sunday. Muhammed Muheisen/AP hide caption

After a month-long offensive in Aleppo, Syria's largest city, rebels are struggling under a fierce counter offensive by the Syrian military and the outcome is far from clear. But the future of Aleppo, the country's financial hub, is already under discussion in secret meetings on the Turkish border.

Over cups of sweat tea in a Turkish border hotel, Moeihmen Abdul Rahman, a lawyer from Aleppo, sits down for his first meeting with Abu Riad, a commander from the Al Tawheed brigade, a coalition of rebel militias leading the assault on Aleppo.

"I think we can create military groups to keep the national peace in Aleppo," says Abdul Rahman, a scheme he proposes to the rebel commander. His argument is a pragmatic one. Aleppo is a business town but many of the merchants and middle class professionals have fled to escape the punishing air and artillery attacks by the regime.

"The biggest concern is to keep in the middle class in Aleppo," he says. The merchants and business class are the financial engine of the city. "They have to start work to make jobs for the fighters so they put down their weapons and go back to their jobs." He proposes a separate unit of fighters to protect private business and government buildings after the regime falls.

It is too early to predict whether these men can work out the details, but this meeting is significant. It is a sign that Aleppo's business community, which had backed President Bashar Assad and his family for decades, is shifting. The rebels are a force on the ground and some of Aleppo's elite recognize the rebels of the Free Syrian army are likely to be a big part of Aleppo's political future.

As Fighting Rages, A Prisoner Swap In Syria

Walking Into Syria: A Reporter's Visit To Where Rebels Are 'Running The Show'

Thousands of civilians have fled the city, many of them to Turkey. Aleppo's poor are sheltered in camps built along the frontier by the Turkish government. The rich and the middle class drive across the legal border and find their own shelter, often in the Turkish town of Gaziantep, which was a shopping hub for Aleppo residents before the revolt.

"We have money, so we came to through the official border," says Abu Hussein, a professor from Aleppo. He left three weeks ago and has settled in an apartment complex where cars with Syrian license plates filled the parking lot.

"We escaped from bombing, from fighting, from killing, from everything," he says. "You cannot live in Aleppo for the time being because the future is very dark now."

Abu Hussein spends his evenings with friends from Aleppo, doctors, dentists, engineers, all part of the professional class. They say they support the revolution and welcomed the rebels, who are mostly from the countryside.

"Everybody wants freedom," says Abu Hussein. But he reluctantly admits that many in Aleppo's business community do not support the fighters, don't fund them or even hand out water to the fighters, because they blame them for bringing the revolution from rural Syria to the city.

The rebel commander, Abu Riad, has his own take on the relationship.

A professional military officer, he defected from the army last year. He is also from the countryside and he dismisses the sensibilities of Aleppo's elite with a grin.

"People from Aleppo are different," he says. "If they don't have their bread, they feel like the world is ending. But it's not true that we were not welcome."

The rebels have worked hard to win over residents, supplying flour and fuel for bakeries, repairing power lines to keep the lights on, and creating medical brigades to ferry wounded civilians across the border to Turkish hospitals.

But government forces have relentlessly pounded rebel positions and some in the city have started to blame the rebels for their misery. Civilian casualties from the Air Force bombing raids are dramatically higher than rebel deaths.

"People are psychologically tired," says Abu Riad, after almost a month-long assault on rebel positions. "Some blame us, but a man whose son is killed by the shelling curses Bashar [Assad] and blames the government."

But there are wider divisions. Videos of gruesome battlefield executions, reports of foreign fighters joining the brigades, have shaken Aleppo's upper class, and even activists who fully support the revolt have openly condemned some rebel groups.

"There is definitely a tension between the countryside and the cities, and that's not unusual, that is historic in Syria," says Andrew Tabler, an analyst with the Washington Institute for Near East Studies.

While they share the goal of bringing an end to the Assad regime, he says, "The question is how do those two forces who have traditionally been opposed to each other, the conservative countryside and the more mercantile cities, how do they work together politically in a post-Assad Syria."