Accessibility links
How Madden NFL's Business Lineup Helps It Win Big The video game franchise is the largest of its kind in all of North America. Its success comes thanks to the complicated team effort of a few interested parties: the NFL, the software company that makes the game, and ESPN. 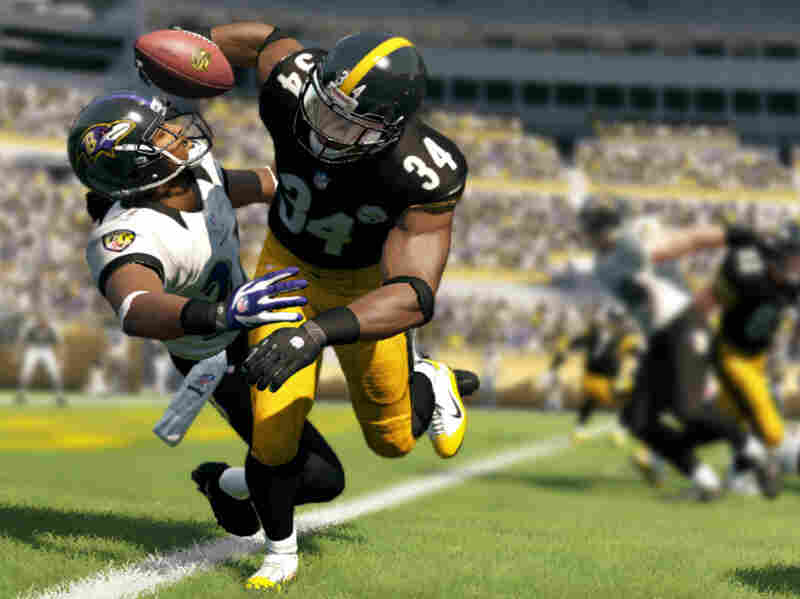 According to the NFL's Peter O'Reilly, fans are drawn to the Madden NFL video game franchise because it lets them experience the NFL year-round in a realistic way. EA Sports hide caption 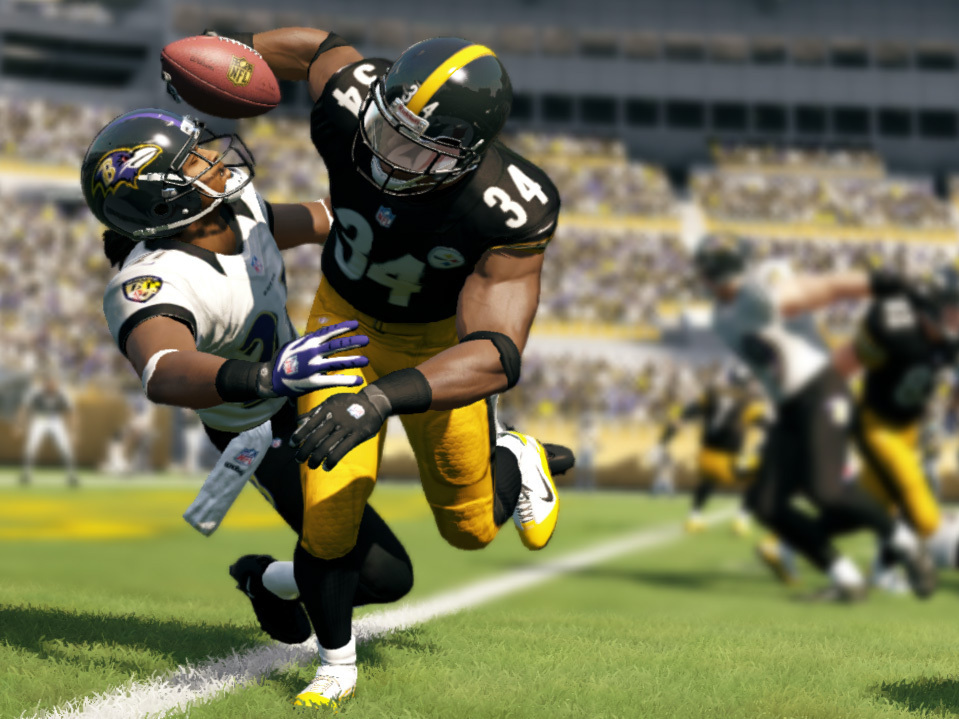 According to the NFL's Peter O'Reilly, fans are drawn to the Madden NFL video game franchise because it lets them experience the NFL year-round in a realistic way.

The Madden NFL video game franchise has sold close to 100 million copies, a number that will only go up on Tuesday when Madden NFL 13 hits shelves. Madden is the biggest franchise of its kind in North America, and big business for an enormous, tangled web of interested parties. Just ask Tommy Mullings — he craves football.

"After the football's done, like, I can't get enough football," he says. "So I'll go watch football all day and then end my Sunday with a couple of games of Madden."

Mullings has been playing Madden for years. He admits the gameplay doesn't change all that much with each version, but he still buys an updated version every year for the new rosters and playbooks. He says he wants the game to reflect what's going on in the real world.

According to Beth Cianfrone, a professor at Georgia State University who studies advertising in video games, that's a common desire.

"Having a new game every year gives all the gamers a chance to see the new changes with their teams," she says. "Rather than play with last year's team that doesn't have a new quarterback or new offensive system, they're able to sell a new one each season."

Cianfrone adds that playing these games over and over makes gamers even more aware of the NFL brand. So for Mullings, Madden is just a video game; but for Peter O'Reilly, vice president of marketing at the NFL, it's like an ad for all 32 of his professional teams.

"It's been such a signature title that brings young fans and older fans closer to the game," O'Reilly says. "Because it is so realistic, [it] gives them a year-round way for them to experience the NFL in their living room."

The software company Electronic Arts, or EA, has negotiated an exclusive deal with the NFL to make Madden, which comes stocked with team logos and player likenesses so it's as realistic as possible. In both the game and in real life, for example, Jacksonville Jaguars running back Maurice Jones-Drew is listed as 5 feet 7 inches tall and plays home games at EverBank Field (assuming he negotiates his contract in time for the season). If Jones-Drew has a lousy game in real life, EA will lower his ranking the next time gamers update Madden online.

That's how the franchise has grown for years with the NFL. As EA sells more games, gamers know more about the sport, and then tune in to watch more football on TV.

Anthony Stevenson is the director of marketing for EA's Madden franchise. He explains why the football series sells more copies than EA's NHL series: "When you go watch ESPN's SportsCenter, how often do they lead with hockey?" he says. "Maybe when it's the Stanley Cup finals — maybe."

And here's where a third sports titan comes in. Raphael Poplock is vice president of games and digital partnerships at ESPN. He says that even though their big red logo isn't featured in this year's game, they're still invested in its success.

"There's a huge halo effect. If more people become fans of the NFL, whether it's through Madden or any other vehicle, then clearly that's going to help our business," Poplock says. "Whether it's more people are watching our live games, or our studio programs, or our content across any platform, that obviously helps."

So ESPN promotes the Madden brand in a number of ways. One of them is the virtual playbook, where ESPN uses graphics from Madden to explain football's Xs and Os on their sports news shows. This year, ESPN also hosted the Madden cover vote, directing fans to their website to vote for the player that would be featured on the game box.

"Letting fans dictate some of the content, in this case deciding who's going to be on the cover, has been a huge success for us," Poplock says.

And Mullings says he doesn't really see a downside to it, "besides your girlfriend getting mad at you for staying up all night playing Madden."

Considering that more and more women are tuning into football, maybe Mullings should ask his girl if she's down to play, too.