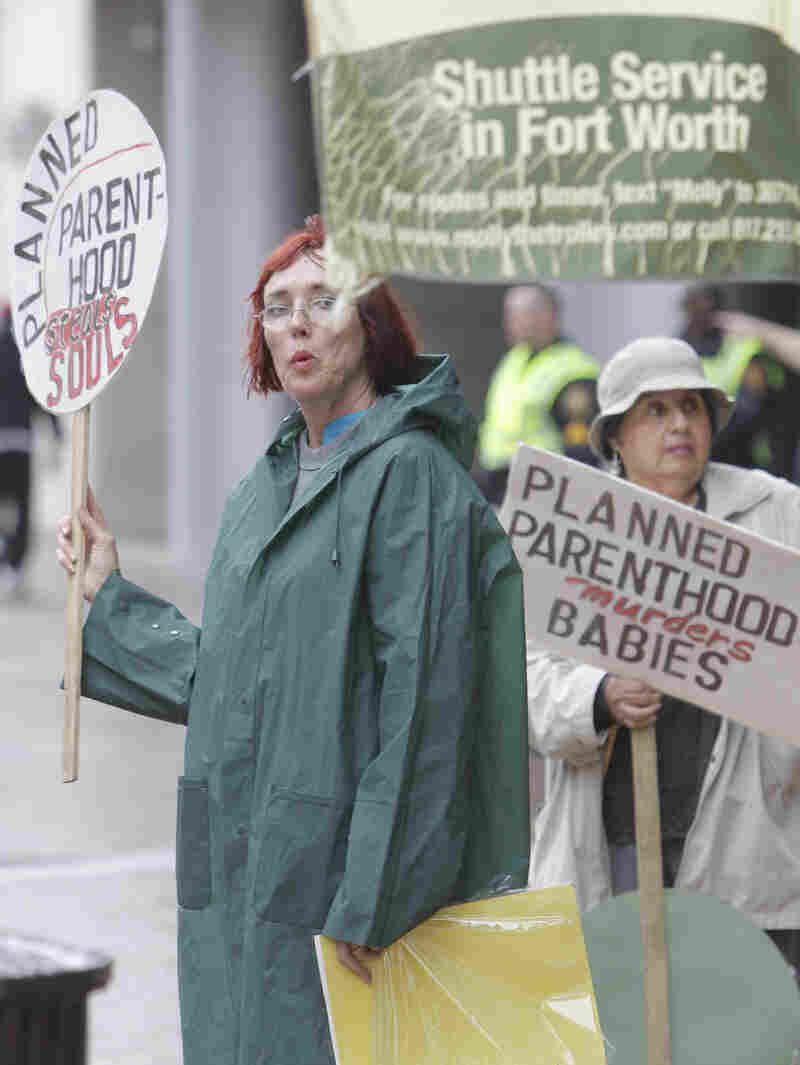 Abortion-rights opponents outside a Planned Parenthood of North Texas event in Fort Worth in February. The 5th Circuit Court of Appeals has ruled that Texas can defund Planned Parenthood clinics because the organization provides abortions. David Kent/MCT/Landov hide caption 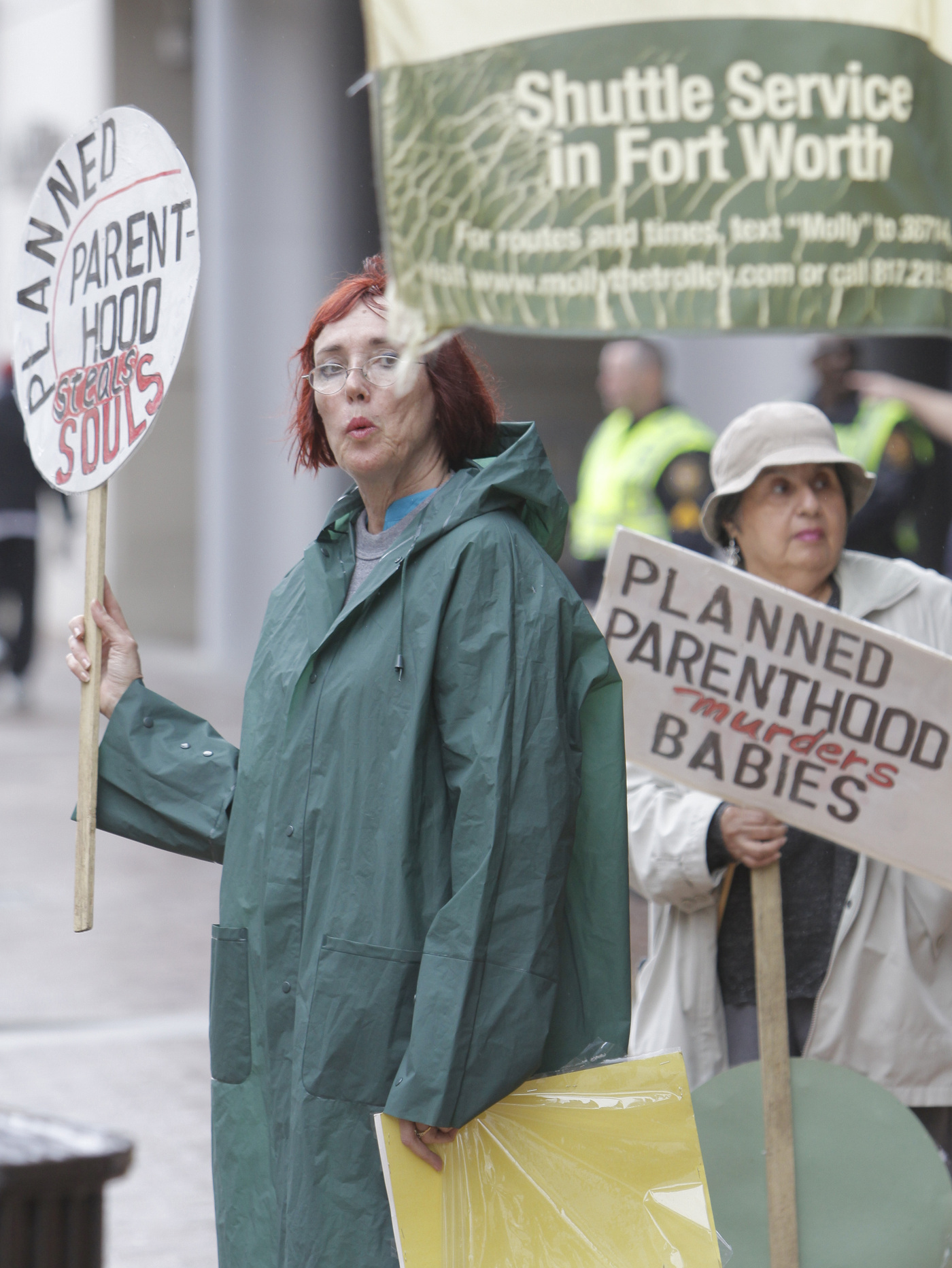 Abortion-rights opponents outside a Planned Parenthood of North Texas event in Fort Worth in February. The 5th Circuit Court of Appeals has ruled that Texas can defund Planned Parenthood clinics because the organization provides abortions.

Officials in Texas say they will cut off state funding to Planned Parenthood following a federal court ruling last week. The decision by a panel of the 5th U.S. Circuit Court of Appeals says the state can defund the health clinics because Planned Parenthood is associated with abortion.

Planned Parenthood warned that the cuts threaten access to health care for more than 50,000 poor women. But many Texas officials cheered the decision, which could reverberate to other states targeting the organization.

Texas Gov. Rick Perry and the Republican-led Legislature have been locked in an ongoing battle with Planned Parenthood over state funding for years.

None of the Planned Parenthood clinics that perform abortions receives any state or federal taxpayer dollars. But Republicans also want to discontinue public funds to clinics that provide preventive health services to the poor.

With the 5th U.S. Circuit Court of Appeals decision, that path is now clear.

"The ruling affirms that the Texas Women's Health Program has no obligation to fund organizations that promote abortion, including Planned Parenthood," says Lucy Nashed, a spokeswoman for the governor.

"This decision is a win for Texas women, first and foremost. It's a win for our rule of law and for our state's priority to protect life," Nashed says.

The 5th Circuit's decision is a reversal of a lower court's temporary injunction that stopped Texas from defunding Planned Parenthood on the grounds that the state's action was likely to be ruled unconstitutional.

In the past, federal courts have ruled that states can't defund Planned Parenthood clinics just because they affiliate with abortion providers, on the grounds that it violates Planned Parenthood's right to free speech and free association, as well as federal regulations.

To get around this obstacle, Perry decided to forgo federal funding, even though the federal government pays 90 percent of the cost, approximately $35 million, of the Texas Women's Health Program.

That approach seems to have opened the door for the 5th Circuit's decision.

"The court is very clear that the Texas policy is constitutional, to the extent that it limits funding to Planned Parenthood in both its affiliates and non-abortion-providing entities," says Stefanie Lindquist, a law professor at the University of Texas.

Lindquist says the 5th Circuit decision focused not on Planned Parenthood's First Amendment rights but on those of the state of Texas. While 95 percent of Planned Parenthood's money goes to provide health care services to tens of thousands of low-income women, the organization is also the state's largest provider of abortions.

The appeals court focused on that, ruling that the name "Planned Parenthood" equates with abortion. So, the court reasoned, if Texas doesn't want to fund an organization it believes is promoting abortion, it doesn't have to.

Lindquist says the decision is a real blow to Planned Parenthood. "It will provide other states who are interested in limiting abortion funding — or funding for abortion-related organizations ... with a road map, especially if they choose to forgo federal dollars."

Just how many states would be willing to follow in Texas' footsteps by forgoing federal funding for their women's health programs is an open question.

As for Planned Parenthood in Texas, Lindquist says the organization can appeal. But with the current makeup of the U.S. Supreme Court, she says, doing so would be a gamble.

The organization could also consider changing the name of the clinics that provide services to women, Lindquist says. "Planned Parenthood doesn't want to do that, I presume," she says. "But it is about the identifying mark of Planned Parenthood — and that that mark is associated, I assume, in the mind of Texas regulators and legislators, with the provision of elected abortions."

But a name change might not offer any guarantee to the organization, either. Texas is likely to decide it won't fund any clinic that is willing to refer a woman seeking an abortion, no matter what that clinic is called. And the court could well uphold that decision, too.

"Of course we're disappointed," says Helene Krasnoff, Planned Parenthood's lead counsel. "The case has never been about Planned Parenthood, though. It's been about the tens of thousands of low-income Texas women who rely on our health services for preventive health services like cancer screenings, birth control, well-woman exams. And we're going to evaluate every possible legal option to protect their health."

In the wake of the 5th Circuit's ruling, it's unclear where those tens of thousands of low-income Texas women might go. Planned Parenthood does have legal options, but none that are particularly attractive.