Accessibility links
Despite Delay, Republican Stage Is Set In Tampa It takes a lot of people to stage a political convention, and they've all been in Tampa, Fla., getting ready: the technical crews, the media, the volunteers and of course the politicians. 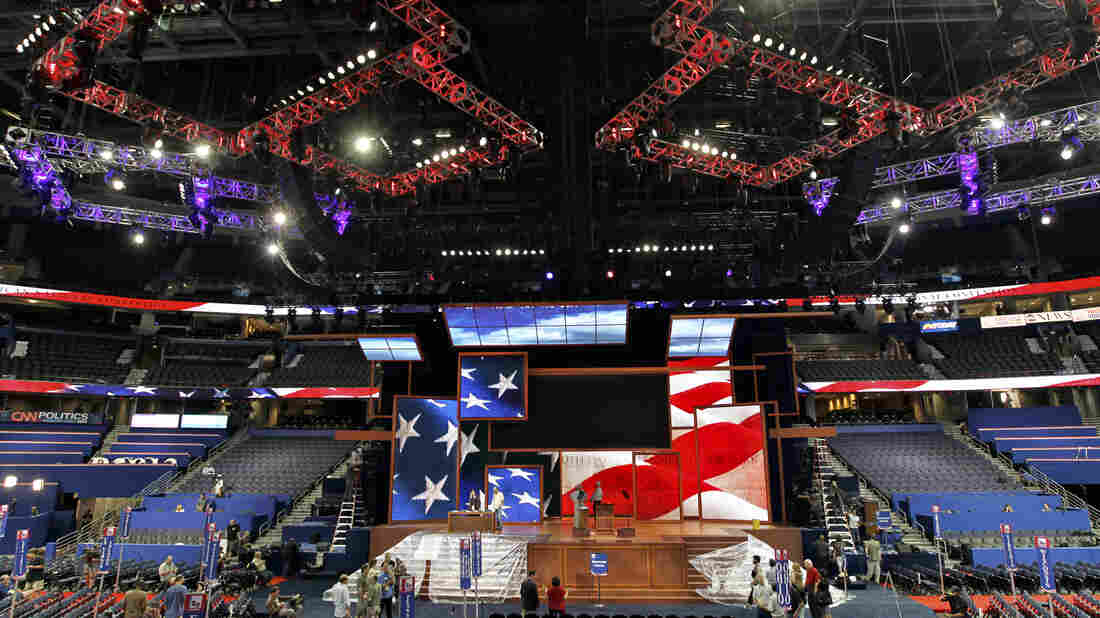 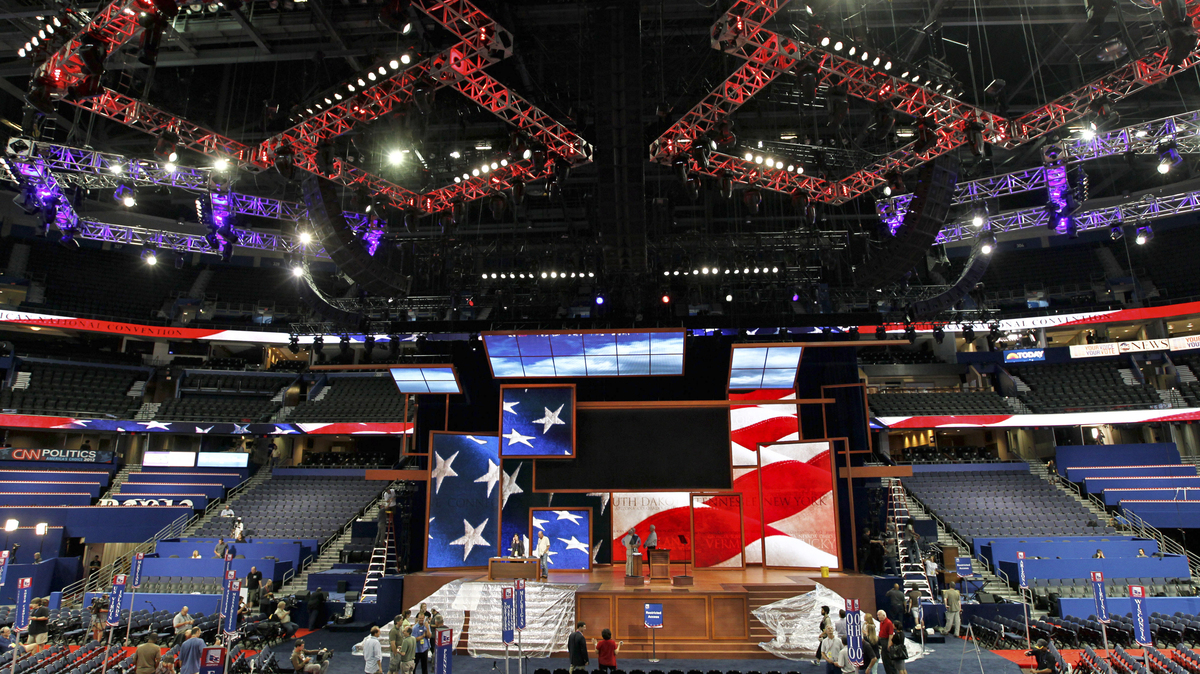 Workers prepare for the Republican National Convention inside the Tampa Bay Times Forum in Tampa, Fla., on Saturday.

After a year and a half of preparations, Tampa, Fla., is ready host the Republican National Convention.

Some 70,000 delegates, support personnel, media and protestors are gathering for the party's nominating event. Originally scheduled to start on Monday, the convention was pushed back because of Tropical Storm Isaac.

Inside the Tampa Bay Times Forum — a hockey arena that's been transformed into a high-tech political stage — it's a vision in red, white and blue. There's a nod to tradition, placards marking the sections reserved for each state's delegation.

The stage appears to be paneled in dark wood, though it's actually vinyl and said to be inspired by the architecture of Frank Lloyd Wright. It's framed by large video screens, which on Saturday were featuring scenes from the 50 states during a rehearsal of one of the convention's key events: the delegate roll call.

Playing the role of delegates, student interns working with television producers tested the audio and video feeds. Some, like 23-year-old Kevin Franklin, a student at the University of South Florida, loved it.

"Absolutely phenomenal, nothing like it in our lifetimes," Franklin says. "I'm so stoked for this happening. I'm registered independent. I might not agree with all policies, but I love being a part of it." 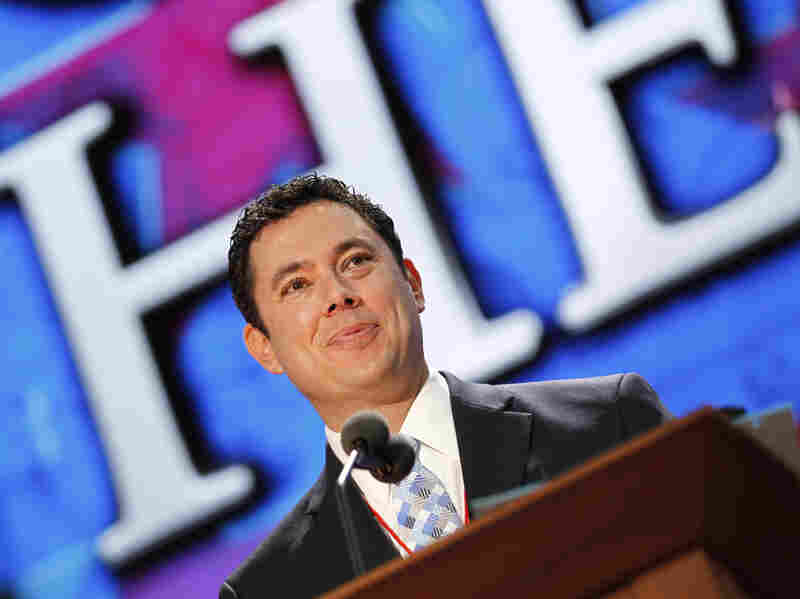 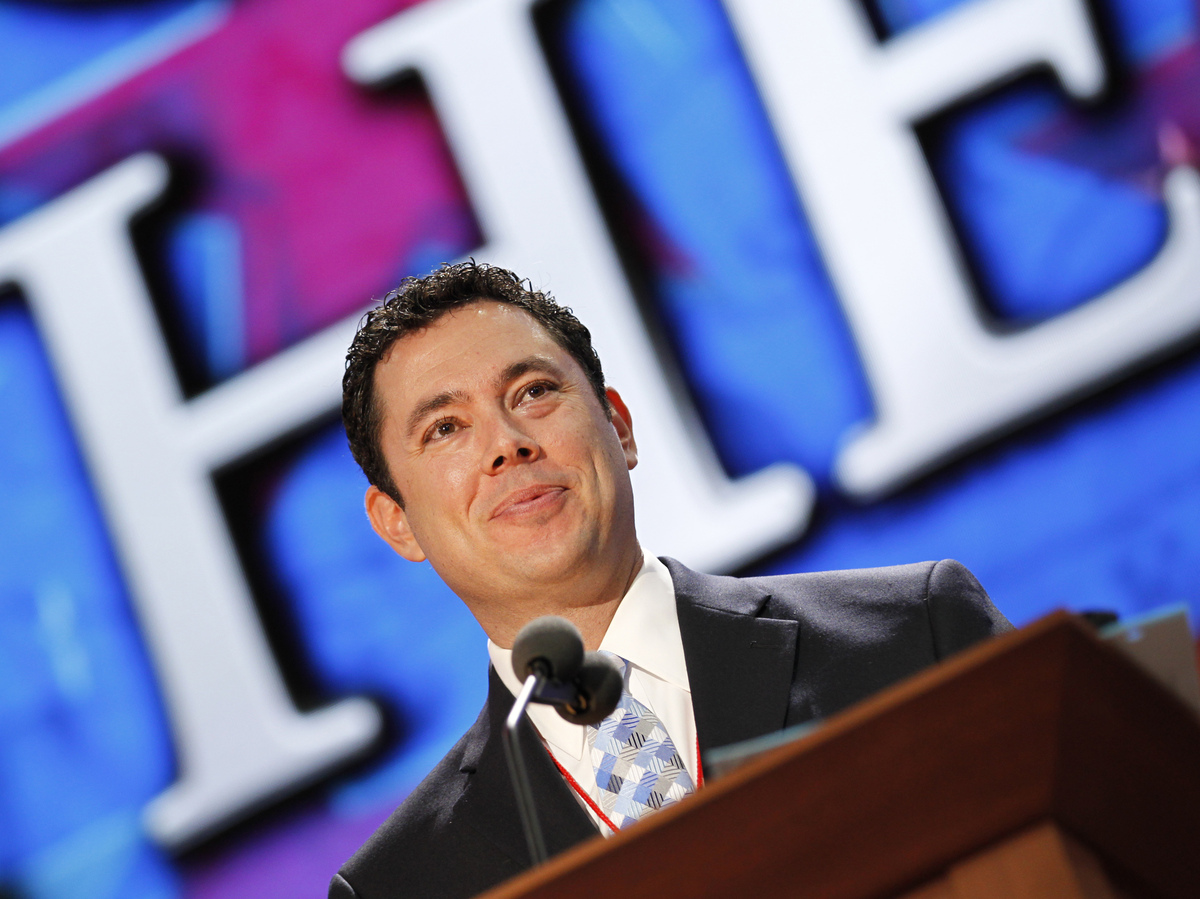 Utah Rep. Jason Chaffetz stands on the stage Saturday during preparation for the convention.

Franklin stood at his microphone, waiting to play his part in the roll call rehearsal and for his moment in the spotlight.

Also preparing for his moment in the spotlight was Rudy Solas and five other members of a color guard made up by veterans. Every member was marching on a prosthetic leg.

"We're the only amputee color guard in America," Solas says.

The group is scheduled to present the colors for the Pledge of Allegiance, the national anthem and the opening prayer on Wednesday, and Solas wants it to be perfect.

It takes a lot of people to stage a political convention, and they've all been at the forum this week getting ready: the technical crews, the media, the volunteers and of course the politicians.

Utah Rep. Jason Chaffetz stepped briefly onto the stage and up to the podium Saturday to check things out in advance of his speech to the convention.

"Just getting used to the teleprompter and the podium and making sure you walk into the right place and don't create your own YouTube moment," Chaffetz says.

As a long-time Romney supporter, Chaffetz says it's thrilling after all these months to realize the GOP convention and his candidate's nomination is just days away.

"I've just been relishing this day for a long time," he says, "and here we are just 70-odd days until the election. Game on."

Unfortunately for Chaffetz, he was one of the speakers cut from the schedule after Republicans shortened the convention because of Tropical Storm Isaac.

Although the storm now appears to have passed Tampa, the GOP has stockpiled umbrellas and rain ponchos just in case.