Accessibility links
Kitchen Window: Zucchini You Actually Can't Resist Showcasing the delicate flavor and texture of this prolific squash can be a challenge. But these three recipes will make converts out of even the most ardent zucchini-phobes. 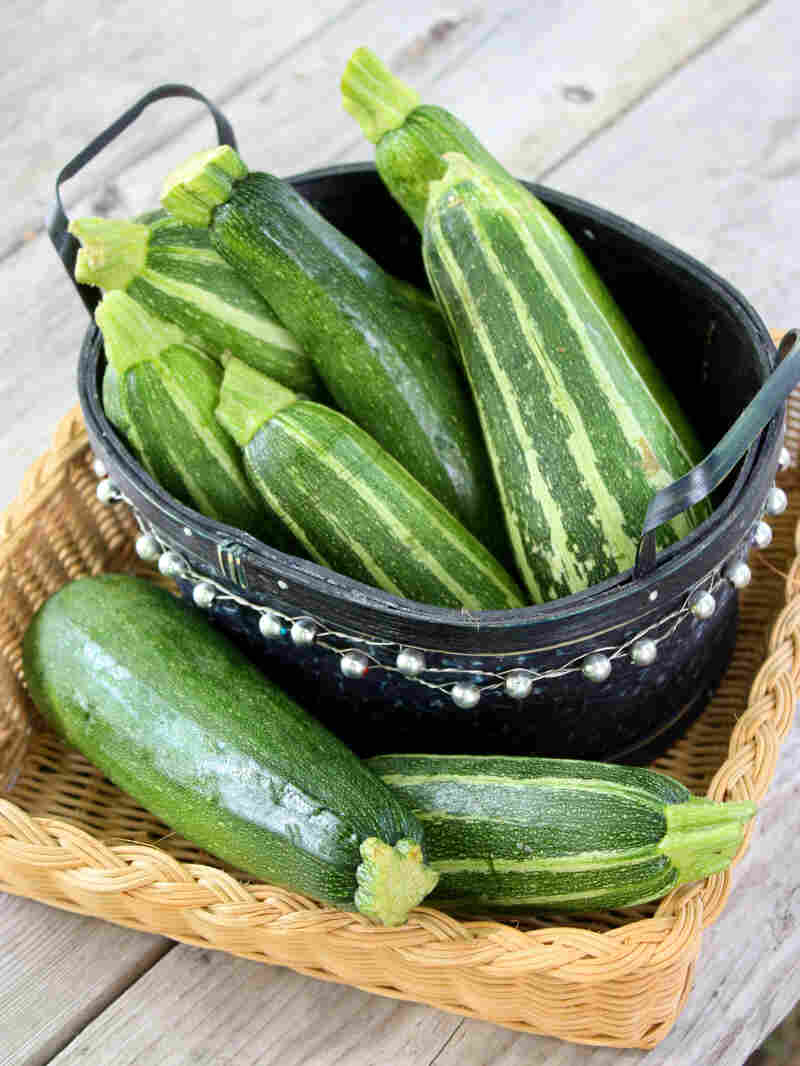 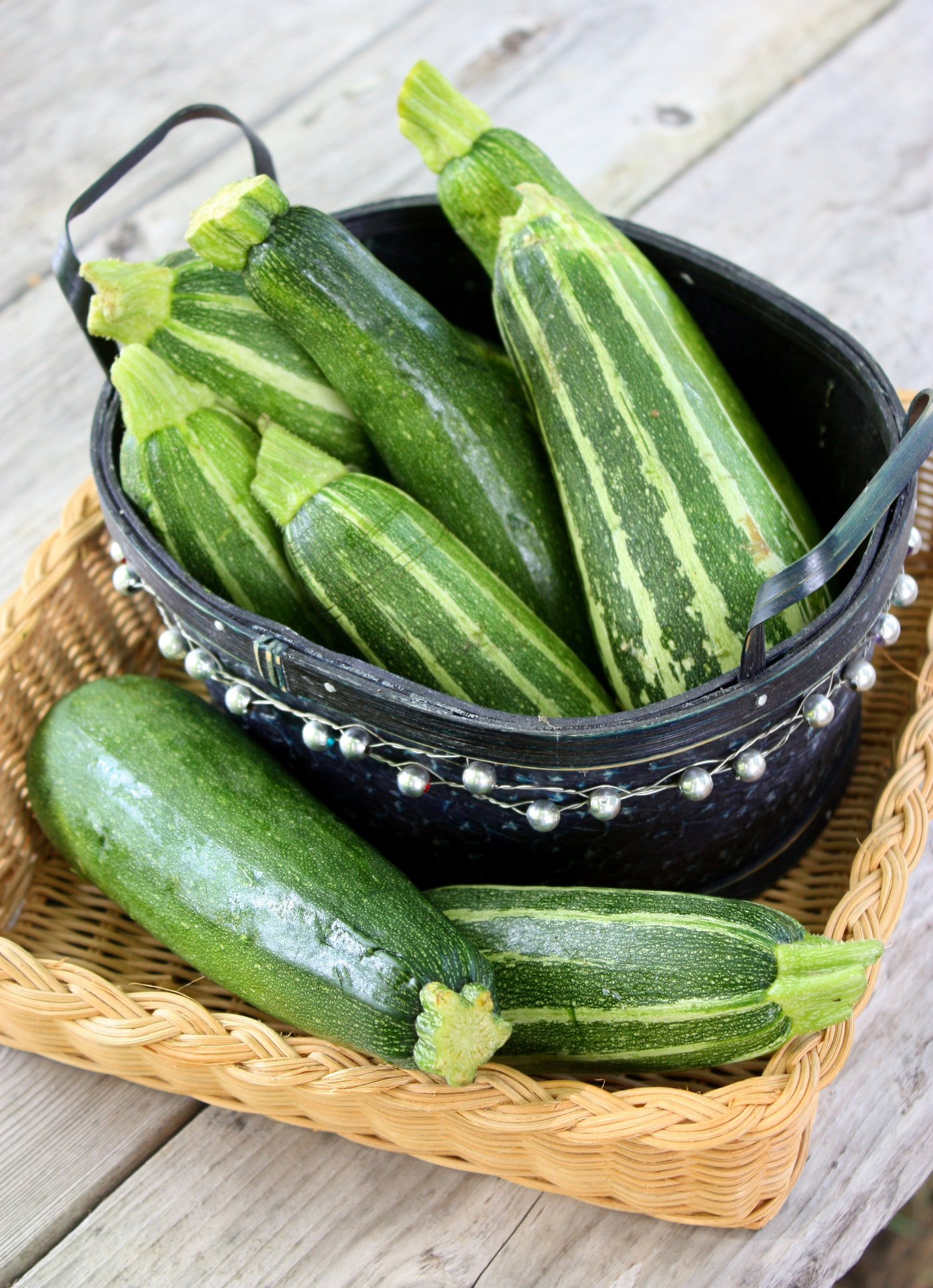 Get recipes for Garlicky Flash Zucchini, Piquant Zucchini With Sour Cream And Dill and Zucchini Fritters With Dill Tzatziki.

"Ugh," my sister exclaimed one evening as we were making dinner. It was supposed to be an easy poached chicken with a ginger-scallion sauce, eaten with cold cucumber wedges, and we had just discovered that what we had bought at the store was not cucumber, but zucchini. It was an easy mistake to make — they were the precise same shade of green. But where the zucchini's skin was mostly smooth, the cucumber's was lumpy. We were not happy.

Let's consider, for a moment, the many faults of zucchini. As a plant, it's prone to vine borers and squash bugs — among the most disgusting of all garden pests. Yet despite these weaknesses, it generally manages to be depressingly prolific, and under the leaves there's always one that hides until it's the size of a baseball bat — a big, green, cottony-tasting baseball bat. As mentioned, it looks like a lump-free cucumber, which means that where your teeth expected crisp, cool rigor, they find starchy blandness instead. Any kid will tell you that a raw zucchini is tasteless yet somehow sort of slimy. When you cook an overly mature zucchini, the watery flesh breaks up around the pulpy seeds, which you eat mainly so no one can plant them and start the odious cycle all over again.

Actually, as the world's zucchini lovers will tell you, a fresh young zucchini really does have a lovely, subtle flavor — green, creamy and faintly sweet. But so often that profile is obscured by the texture problems of all cooked squash. Is it possible to overcome those twin foes, dampness and blandness, in an ordinary kitchen?

I think so. Over the years, I've collected exactly three recipes which transform zucchini into an alluring, mysterious stranger. Last summer, two of them made converts of my kids, who were previously ardent zucchini-phobes. And the third is a way of dealing with adults who think they already know the whole story as far as zucchini is concerned, since they have already tolerated it grilled, julienned into "pasta" and as "carpaccio" without complaint.

One not-so-secret weapon is salt. Our friend the zucchini is 95 percent water. With just a bit of salt (use kosher — it's easier to distribute than table salt) and a little time, you can start drawing out the zucchini's vast internal reservoirs. If you don't, the moisture steams out in the pan instead, leaving you with a limp, insipid vegetable, a puddle of warm, zucchini-flavored water and a humid, cranky atmosphere in the kitchen.

If salting zucchini a little is a good thing, is it better to salt it a lot? Definitely not. You only need a little salt — half a teaspoon of kosher salt for one medium zucchini, say — to start pulling the water out. Use more, and the zucchini will simply taste like zucchini-flavored salt. If you try to rinse out the extra salt, you risk adding back in the water you just tried to get rid of.

If salting zucchini briefly is a good thing, is salting it for a really long time even better? Not necessarily. It depends what you're after. If you'd like soft, pliable shreds of zucchini that offer no resistance, then you can leave them for an hour or more, squeezing the extra juice out at the end. You can then bind the last bits of moisture in some flour or starch and make yourself a nice zucchini fritter, crisp and hot against a cool, garlicky, creamy dip.

If you're after zucchini pieces that still have some backbone, cut them into 1/3-inch batons, salt them for no more than 30 minutes and blot them before cooking. That way, if you choose to launch a furious, all-out assault, cooking it fast and hot in a blazing pan and serving it at once, the zucchini will still have some bite.

I found my most unexpected zucchini conversion experience in The Vegetarian Option, a quintessentially English ode to vegetables by Simon Hopkinson. The zucchini shreds are married with sour cream in a tart pickle puree, and though I don't recommend your children try it, I found myself licking the bowl.

Should these recipes fail to please, don't give up on zucchini right away. There's still zucchini blossoms, zucchini soup and zucchini bread — all of which have their seasonal charms. If none of these satisfy, it's possible that zucchini, in the end, is simply not for you. Try a cucumber.

I originally learned this way to prepare zucchini from Fuchsia Dunlop's marvelous Sichuan book, Land of Plenty (Norton 2005) — though there's nothing all that Chinese about it. My own technique has changed a little over the years, but the most important point remains the same: never, ever, ever crowd the pan. If you want to double the recipe, better to make two small batches and devour them each on the spot than end up with waiting-around-getting-soggy zucchini slivers. 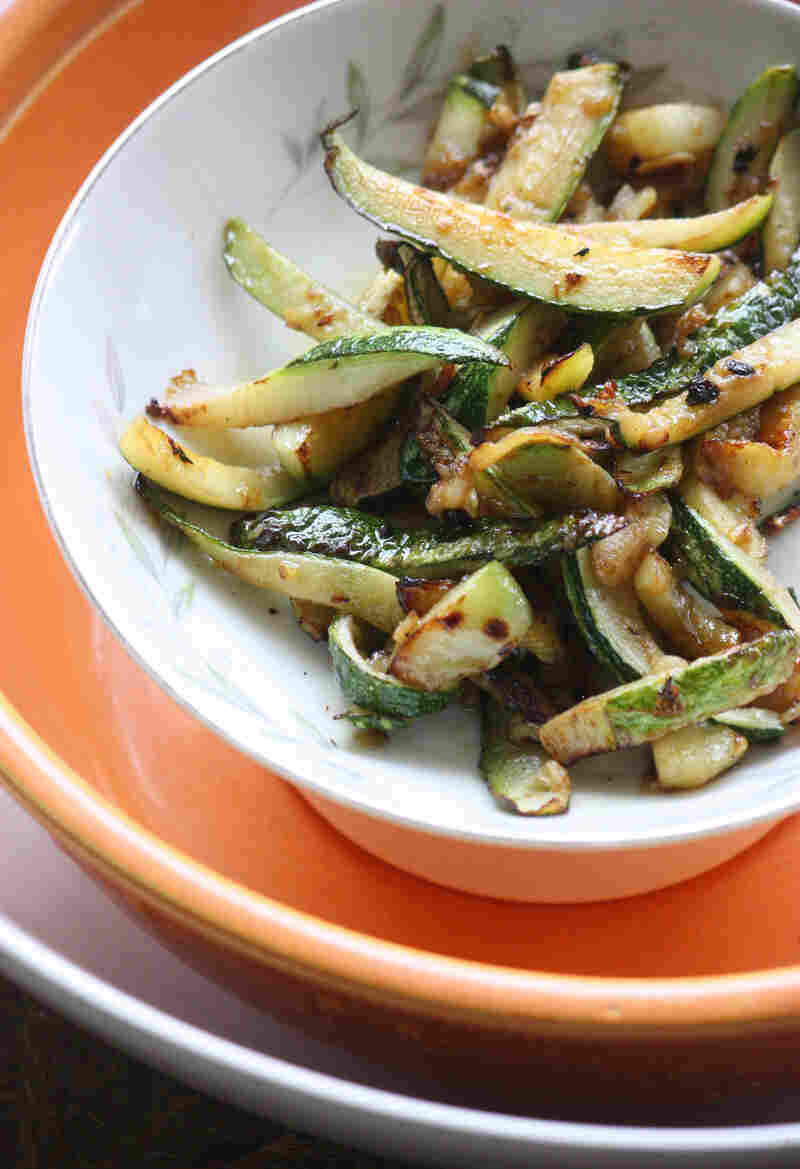 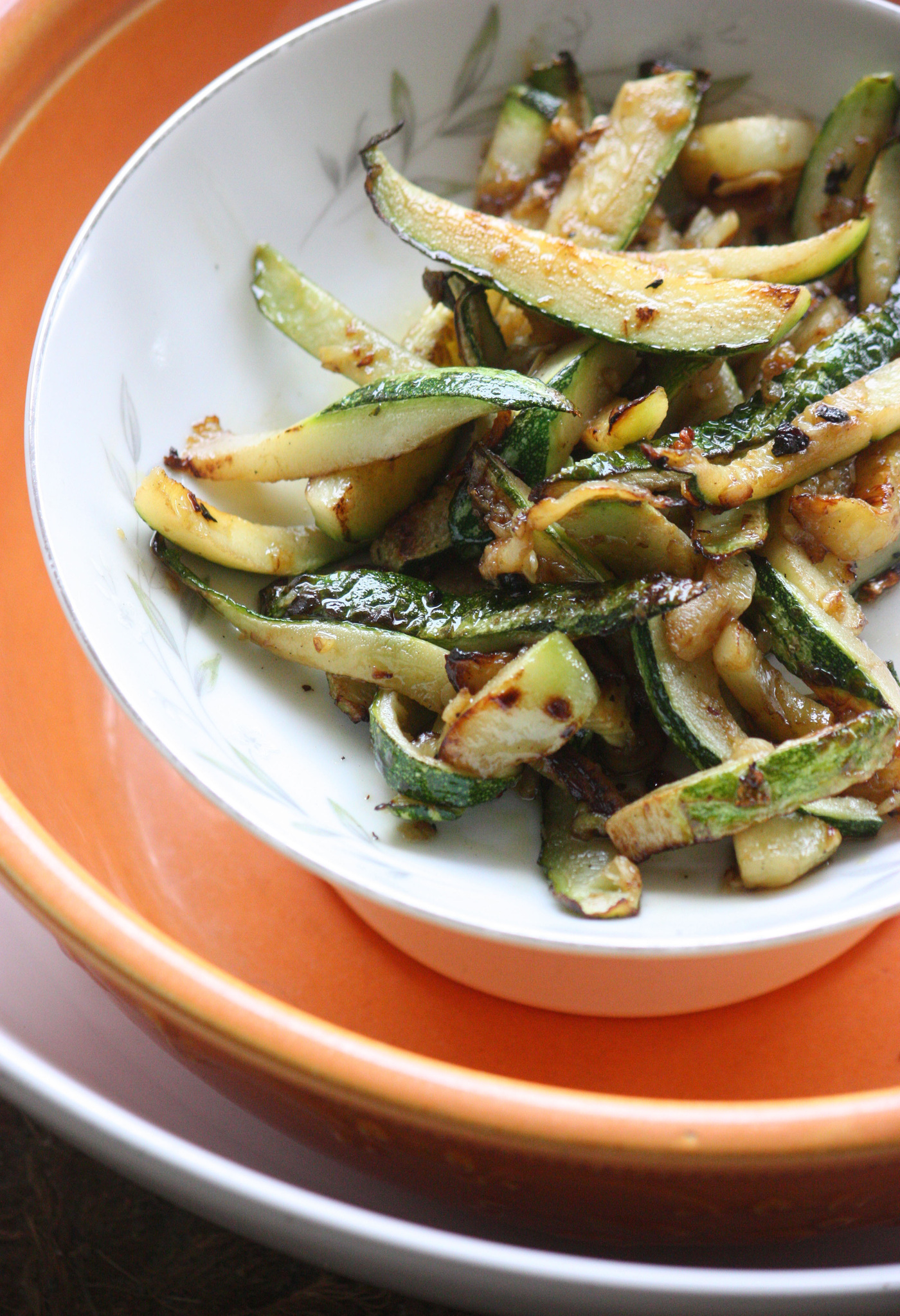 1 tablespoon peanut oil (or canola if you can't get peanut)

Slice the zucchini lengthwise into 1/3-inch-thick slices, and then diagonally to make 1/3-inch wide batons. Drop them in a bowl, sprinkle with the kosher salt and toss thoroughly with your fingers. Transfer the zucchini to a colander set over the bowl. Let rest for no more than 30 minutes, then lift out and blot dry with paper towels.

Meanwhile, crush the garlic through a press and set aside.

Heat a big, heavy cast-iron skillet or wok over a high flame. When it's hot enough to make a droplet of water dance, add the oil and swirl it around until it just starts to smoke. Keeping the heat as high as possible, add the blotted zucchini all at once. Spread it out in a single layer and keep it in the blazing-hot pan for 30 seconds or so to encourage some browning.

When you're sure you see brown spots on the underside of the zucchini pieces, add in the garlic and stir-fry continuously with a slotted spoon until most of the zucchini is a mix of bright green skin and creamy flesh with golden-brown spots, and just tender. It shouldn't take more than a minute or two. Serve immediately.

This intriguing, soothing blend of smooth sour cream and tart, sweet pickle flavor is the last thing you expect to encounter in a zucchini dish adapted from The Vegetarian Option by Simon Hopkinson (Stewart, Tabori and Chang 2010). Plus, there's something perversely satisfying about flavoring zucchini with a puree made from its doppelganger cousin, the cucumber. 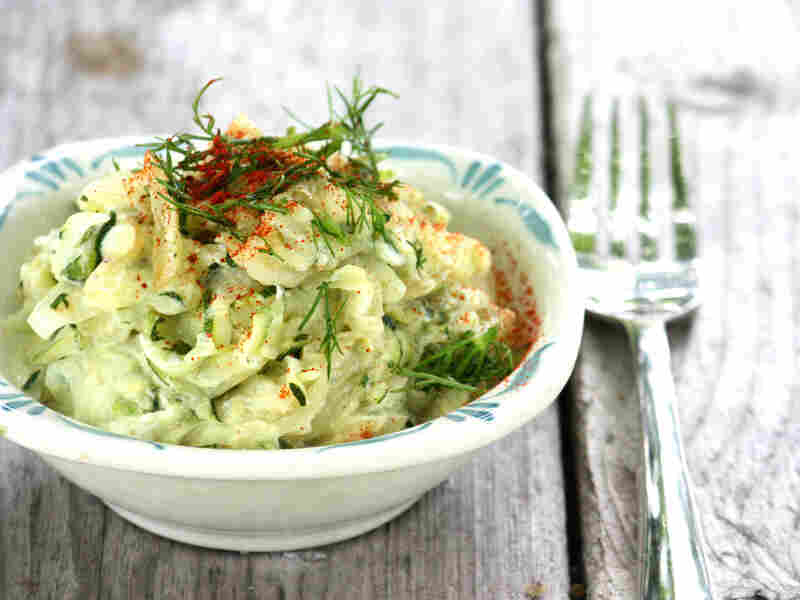 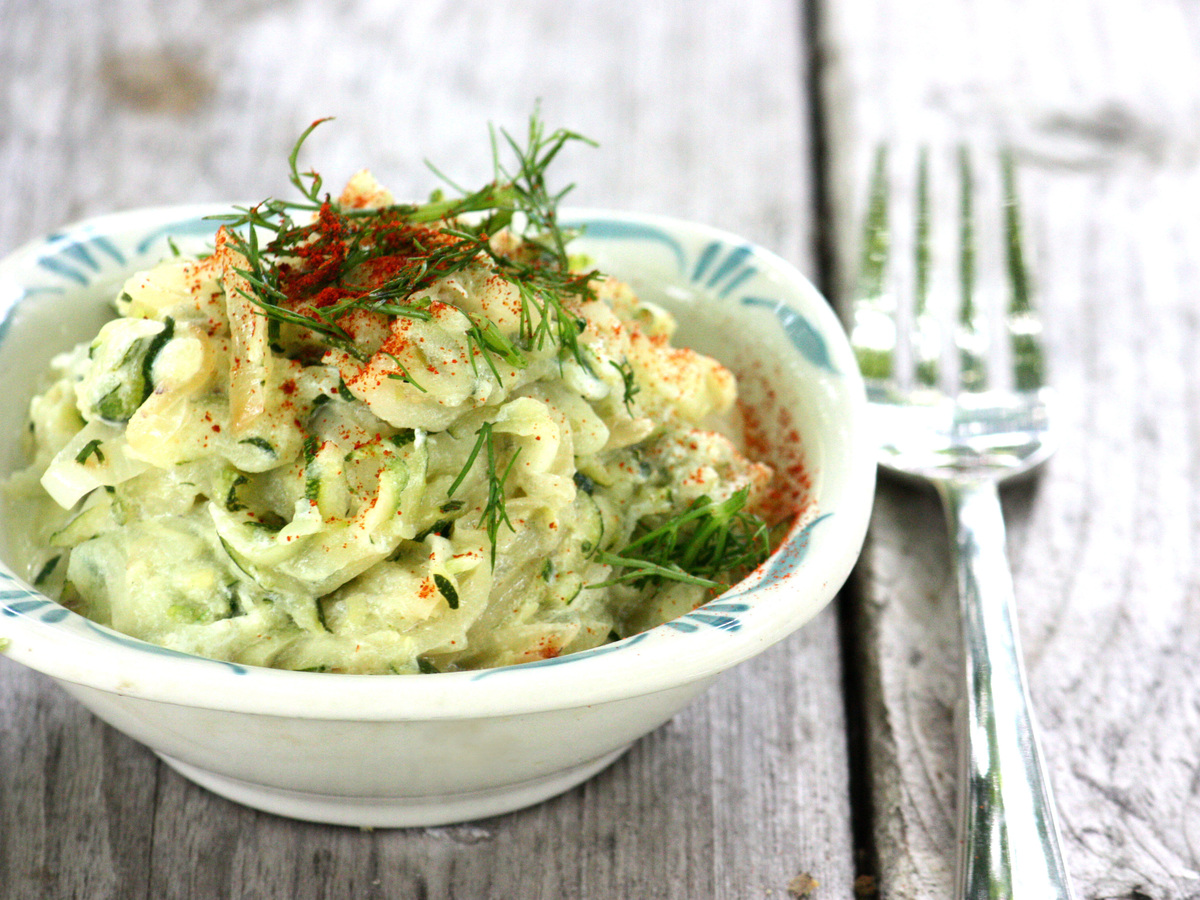 Sprinkling of paprika, to garnish

Sprinkle the grated zucchini with salt, only to season them, not more. Put them to drain in a colander with a dish underneath. Leave for 1 hour, then, using your hands, squeeze out the excess liquid. Put the zucchini to one side.

Melt the butter in a heavy cooking pot. Add the onion and stew until soft, but not colored. Tip in the zucchini and stir them around with the onion until well mixed. Grind a little pepper over, put on the lid, and cook very gently for about 5 to 7 minutes, stirring occasionally.

Using a blender, puree the dill pickles with the vinegar, dill and sugar.

Remove the lid from the zucchini, turn up the heat and, if necessary, cook off any excess liquid. Add the puree, stir in the sour cream and bring the mixture up to a simmer. Cook for a few more minutes until the assembly is thick and unctuous. Check for seasoning.

Turn into a heated serving dish or divide between individual shallow soup bowls.

Since the first day I made these fritters, from The Kitchen Garden Cookbook (DK Publishing 2011), my kids have been clamoring for them. They don't get them often, as we mostly avoid frying in more than a tablespoon or two of oil. But if you do decide to go for it, use a full 1/2-inch of oil and don't try to skimp. You'll need it to drive off the last of the moisture and firm up the fritter. 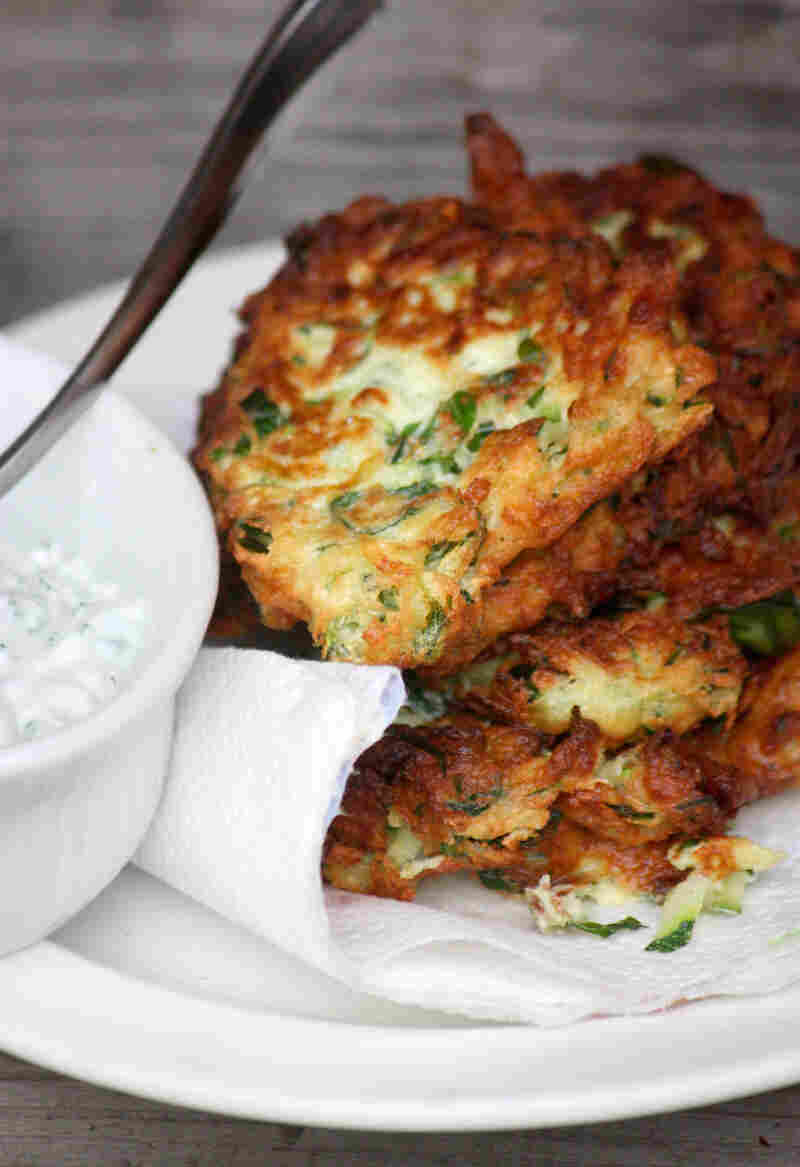 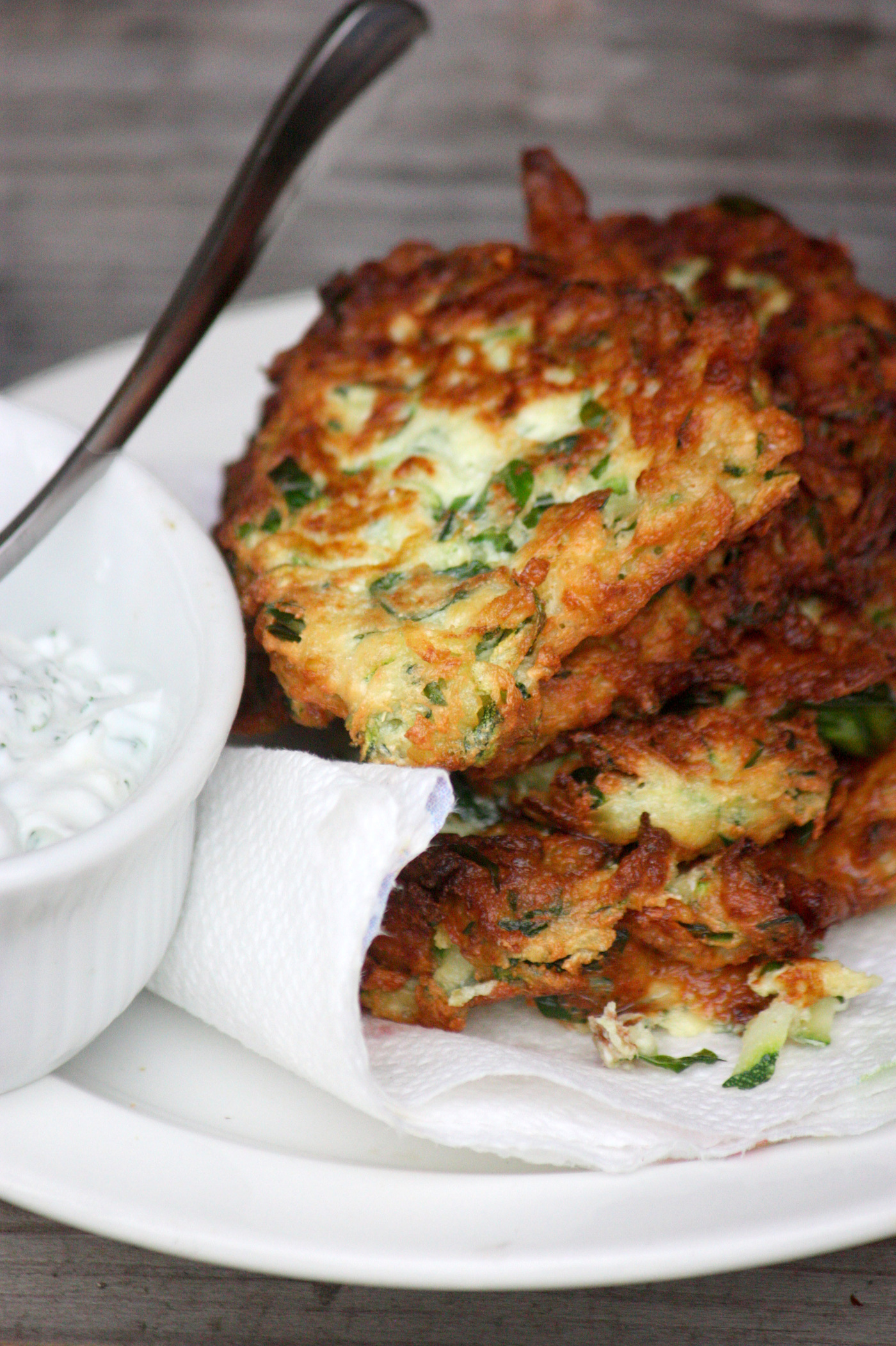 5 garlic cloves, crushed through a press

Juice of 1/2 lemon to taste

Sprinkle the zucchini with salt and leave to drain in a colander for 1 hour. Squeeze dry in a clean tea towel.

While the zucchini is resting, make the tzatziki: Mix half the garlic with the dill, salt, freshly ground pepper and yogurt. Add a squeeze of lemon juice to taste.

In a bowl, whisk together the ricotta cheese, eggs and flour. Add the remaining garlic and the basil and parsley. Season well. Mix in the zucchini.

Fill a frying pan with oil to a depth of 1/2 inch and place over medium heat. When hot, fry 2-tablespoon-sized dollops of the batter, without crowding, for 2 to 3 minutes on each side, until golden brown. Drain the fritters on paper towels and serve hot, with the tzatziki on the side.