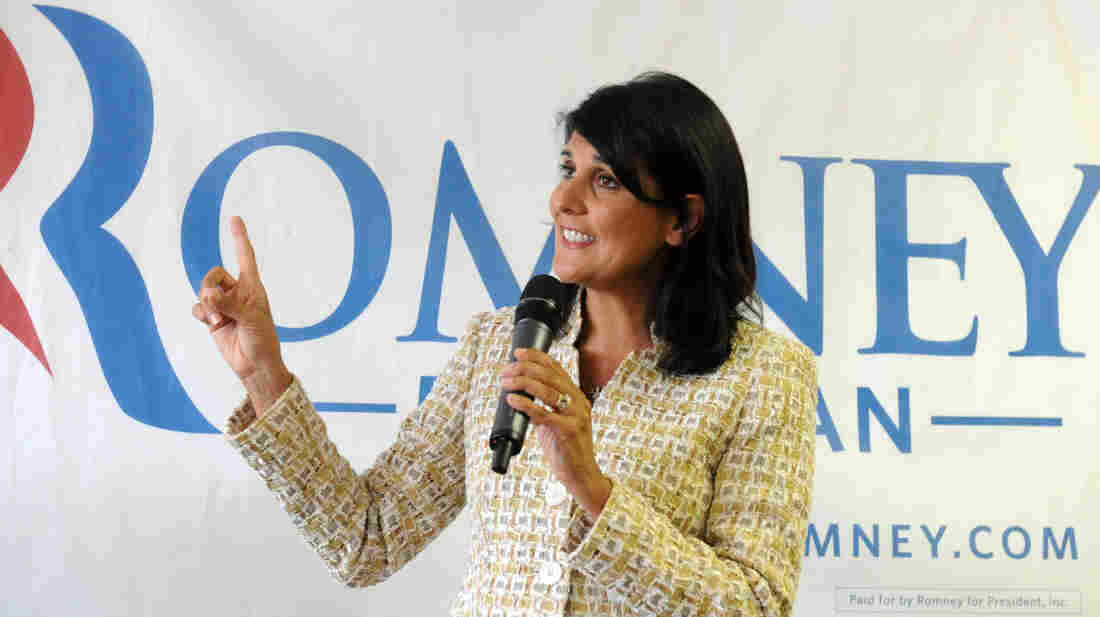 Among the speakers with a prime-time slot at the Republican National Convention in Tampa this week is South Carolina Gov. Nikki Haley. The speech could propel her into national politics.

The talk about Haley always mentions her gender, her age — 40 — and her race — Indian-American. She wears the labels proudly, and for $19.95 you can read all about them in her memoir Can't Is Not an Option. But there's another label Haley likes: fighter.

On Comedy Central not long ago, she mixed it up with fellow South Carolinian Stephen Colbert:

Colbert: "I love my home state, but the politics are just one notch above Honduras, wouldn't you say?"

Haley: "It's a blood sport. I wear heels, and it's not for a fashion statement. It's ammunition."

Colbert: "You keep them sharpened?"

Haley honed her tough image in a bruising election for governor in 2010 that included shadowy attacks and allegations of infidelity. The charges rolled off "Teflon Nikki," as her detractors call her. She was an outsider with just a few years' experience as a state lawmaker. But Tea Party support helped her trounce three established Republican politicians.

Those lawsuits touched on South Carolina's new immigration and voter ID laws, as well as Haley's penchant for "talking smack" about organized labor. She won that one.

"I will continue to be a union buster, because every time you see me on national TV busting the unions, another CEO calls. It just works," she says.

On Haley's watch, companies have pledged to create thousands of new jobs in South Carolina. Unemployment is down 1 percentage point since she took office, though, at 9.4 percent, it's still above the national average.

She's a cheerleader for the state but took heat when she went so far as to mandate that government workers answer the phone with: "It's a great day in South Carolina. How may I help you?"

Haley's critics called her tone-deaf. Powerful Republican state legislators with whom she has fought bitterly over budget and transparency issues scoffed. Democratic lawmakers threatened to ban the phrase.

"If they thought the greeting was ridiculous," Haley says, "I think the fact that they're wasting energy trying to fight this is ridiculous."

The Tea Partiers who got her elected were ticked that she backed Mitt Romney in the primary. But that decision — and her sharp heels — helped land her Tuesday night's prime-time slot on the RNC stage.