Accessibility links
Slaughter In The Subway: A Tale Of New York Terror As a kid, author Victor LaValle loved horror stories. But it wasn't until he read Books of Blood by Clive Barker that he found one set in his own hometown. Have you ever read a book that took place where you live? Tell us in the comments. 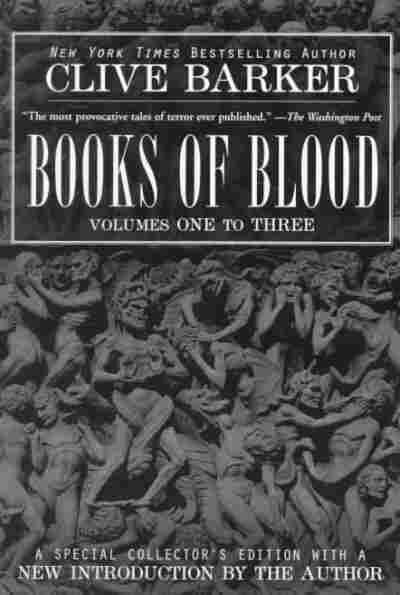 Victor LaValle's latest novel is called The Devil in Silver.

"I have seen the future of horror ... and it is named Clive Barker."

It was the mid '80s. I was in my local comic book store. I remember seeing those words on the paperback cover of a book. The image of a cheap, rubber-looking mask with its mouth hanging open and its eyes empty was on the front. A purple light glowed behind the mask. It wasn't frightening. The cover looked crappy. And the name, Clive Barker, meant nothing to me. I might've passed it by if not for the name under the blurb: Stephen King.

King had called this dude the future of horror. That was like having the shark from Jaws endorse a new monster. I bought the paperback.

Volumes One to Three

It was called Books of Blood.

I walked home from the store and cracked the spine of the book before I even got back to my apartment. It was a collection of six stories. I opened the book, at random, to the second story: "The Midnight Meat Train." Leon Kaufman, a recent transplant to New York City, is drinking his morning coffee and reading the New York Times at his local deli. The story of another gruesome murder, in a string of them, dominates the front page. Bodies have been discovered, butchered in ritualistic fashion, down in the New York City subways.

And that's where I stopped reading. Not because of the butchered victims. It was the fact that they'd been found in the subway cars of New York City. Can I tell you what a revelation this was?

As a 13-year-old fan of horror fiction, I hadn't seen too many cities in the literature I loved. It was always small towns, or backwoods locales, or maybe the suburbs. But a real city? With subway systems and morning coffee bought at the corner store? Those were rare. And yet here was Clive Barker, a Brit, writing about a city. My city. Making it as fitting a location for the shivers and chills as Stephen King's Derry, Maine, or H.P. Lovecraft's haunted New England towns. I felt so ... grateful. We were on the map!

Victor LaValle is the author of the novels The Ecstatic and Big Machine. Youmna Chlala hide caption 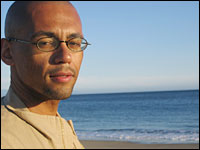 Victor LaValle is the author of the novels The Ecstatic and Big Machine.

Needless to say, Leon Kaufman soon finds himself down in that same New York City subway system. And someone, something, is waiting there to meet him.

Do you see why I was hooked? Why I tore through every other story in Books of Blood in a day? Why I rejoiced when there were five more volumes to come? Barker's stories took place in other parts of the world and I enjoyed them just as well, but it was that first story, "The Midnight Meat Train," that hit me hardest.

Barker made me believe that stories about my hometown — Queens — could be worth a shiver and a chill, too. Books of Blood was a jolt of terrifying salvation.