Accessibility links
Movie Review - 'Flying Swords Of Dragon's Gate' - A 3-D Spectacle That Could Use More Depth Flying Swords of Dragon Gate, a 3-D wuxia film from Tsui Hark, takes full advantage of the format's dynamism for its wild fight scenes. The plot is convoluted, without much below the surface, but it's "raucously entertaining," says critic Stephanie Zacharek. 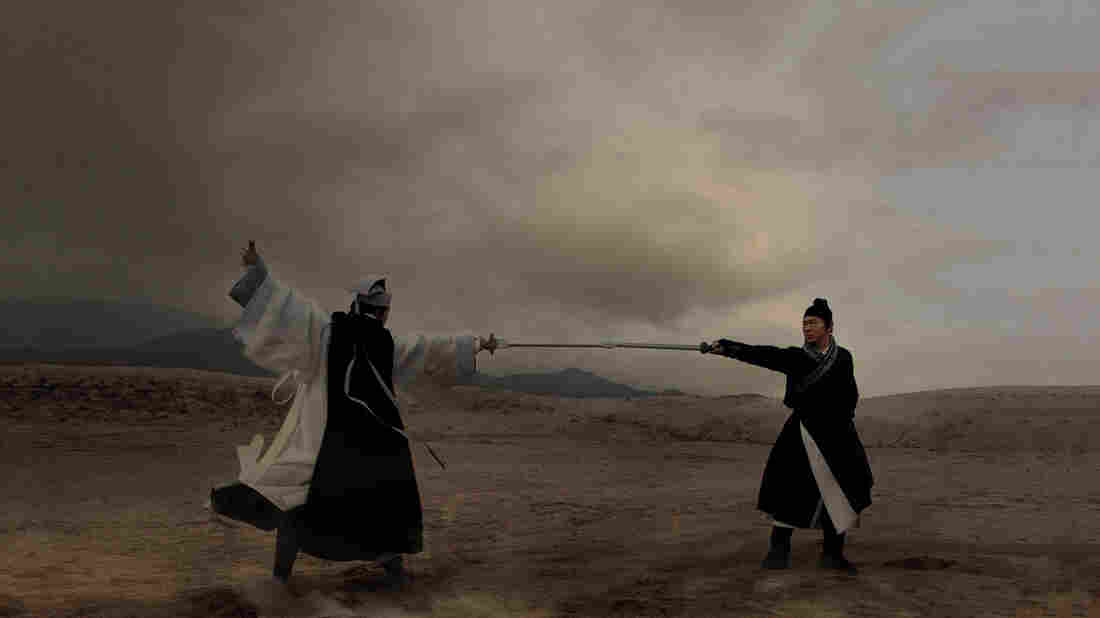 Rated R for some violence

A Tsui Hark movie in 3-D — not to mention the first wuxia film to be shot in the format — ought to serve up three times the spectacle of the usual Tsui affair. And damned if Flying Swords of Dragon Gate doesn't almost deliver.

In technical terms, Flying Swords features some of the most gorgeous 3-D effects of any live-action film yet made, James Cameron's Avatar included. It's the storytelling and characterization that fall short: Even for a movie that sits squarely in a genre known for its complicated plots, Flying Swords is ultra-cluttered with narrative details, and its most charismatic figures — including a character played by the marvelous Jet Li — get lost in the whirl.

The trick is to let yourself swoon into the picture's visual embrace and not get too hung up on its myriad sticky plot points. Li shows up early on, in the movie's magnificent opening sequence, set in a shipyard: His character, a shadowy crusader and stalwart defender of peasants, swoops down seemingly from nowhere to rescue a group of perceived traitors from the clutches of a government despot (played deliciously, if all too briefly, by wuxia legend Gordon Liu).

Li does away with the wily villain amid a symphony of swirling robes and high-kicking limbs, and after a great show of slashing, slicing and dicing. But meanwhile, an even stronger group of adversaries gathers elsewhere: A nasty eunuch (Chen Kun) sets off to find and kill a pregnant palace maid (Mavis Fan) who has been taken under the protection of a butt-kicking, flute-toting female warrior (Zhou Xun).

He tracks them to a desert inn — wuxia fans will recognize it as a version of the famed Dragon Gate Inn, from King Hu's 1966 picture of the same name — where a fierce Tartar princess with an extravagantly tattooed face (Kwai Lun-mei) is already holding court. A bandit girl (Li Yuchun) and her mild-mannered sidekick — who coincidentally looks just like the nasty eunuch (both are played by Kun) — also drop in.

It turns out that a major sandstorm, one that comes around every 60 years, is just about to blow into the area and reveal a buried treasure. But that may be more detail than you can handle right now. The one thing you can count on is that any object or body part that can be made to poke or fly out from the surface of a 2-D movie screen — swords, daggers, droplets of blood, bits of splintered wood, various limbs — can and will be comin' at ya, via the magic of 3-D. (Chuck Comisky, who supervised the 3-D effects on Avatar, lent a hand here as well.) 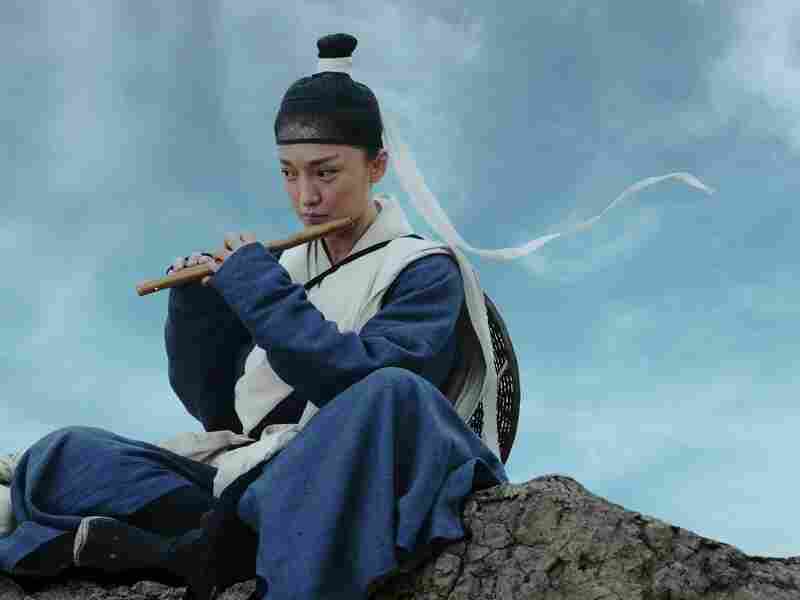 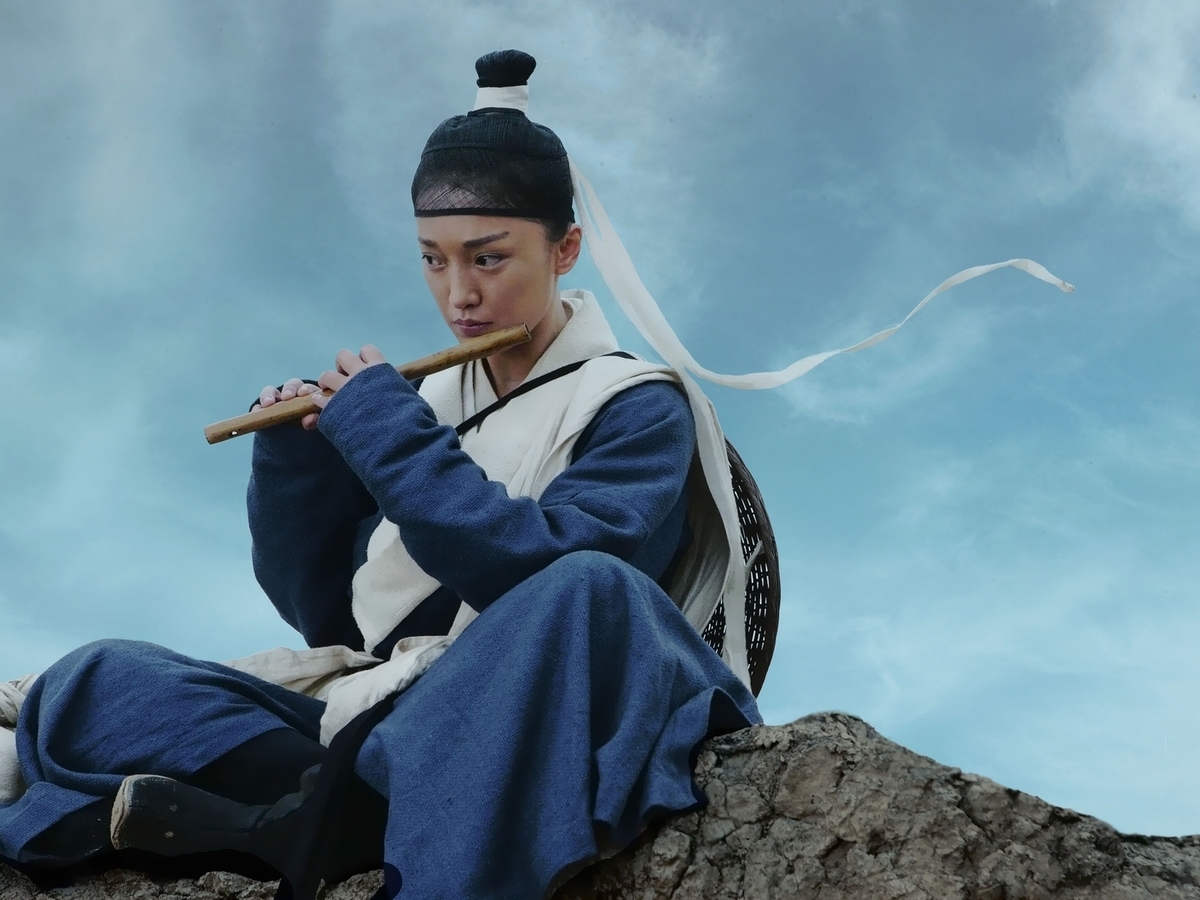 Flute-toting warrior Jade (Zhou Xun) is tasked with protecting a pregnant palace maid, just one of the many characters converging on the Dragon Gate Inn.

The second half of the movie features more action than the first, and these sequences are extravagantly staged. But in visual terms, the first half is much more opulent: That's where Tsui makes the best use of elaborately carved and painted dragons and Buddha statues, and the embroidered silk costumes seem so vivid and tactile you'd swear you could reach out and touch them.

Flying Swords of Dragon Gate is raucously entertaining, though it doesn't have the go-for-broke craziness of Tsui's last picture, the 2010 Detective Dee and the Mystery of the Phantom Flame. (Unlike that picture, this one, alas, does not feature a mystical talking deer.)

But the biggest problem with Flying Swords of Dragon Gate — which was inspired by Hu's Dragon Gate Inn and the 1992 New Dragon Gate Inn (produced and co-written by Tsui) — is that there just isn't enough Jet Li. Li is still a graceful and compelling physical performer. But in pictures like 2005's Danny the Dog (released in the United States as Unleashed), he proved that his face — as noble and expressive as that of a silent-film star — is an even greater asset than the agility of his limbs.

We don't get to see enough of that face in Flying Swords of Dragon Gate. Three-dimensional technology is all about making movies larger than life; maybe that's what keeps it from ever getting beneath the surface.