Accessibility links
Bloc Party Gets Back To Basics The British band's goal was simple: sound like four guys playing music in a room. 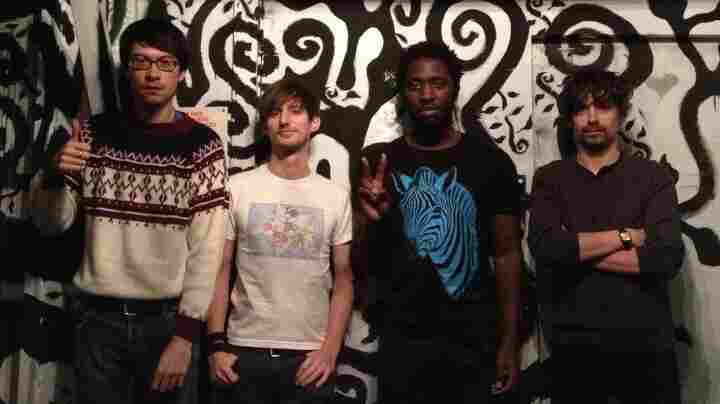 Bloc Party's new album, Four, is a return to their roots. Courtesy of the artists hide caption

When a band sits down to write new music, there's often a goal in mind: They want to tell listeners a story; make them feel something; or evoke an atmosphere. But for the British rock band Bloc Party, the goal was more modest: to sound, simply, like four guys playing music in a practice room.

It may not be the most novel idea, but for Bloc Party, it's a return to their roots. Kele Okereke is the group's lead singer and rhythm guitarist. "When you have a riff and you play it to the others, and they play it back to you but they play it back to you slightly differently," he says, "it takes your idea somewhere else. You know, I miss that, kind of, way of working."

The way they worked on their last album was quite different. Intimacy was heavily produced, born more from hours spent in front of a computer than days in a practice room. "It wasn't the most spontaneous process," Okereke says. "I was missing that organic feeling."

That organic feeling can be heard on Bloc Party's new album, Four, which is their fourth album. The band has been on hiatus the past few years, and one of the first songs they wrote when they regrouped is called "Real Talk."

"It was one of the first songs that we wrote when we started rehearsing together in New York," Okereke says. "I knew then that we were going to make another record, because I felt excited by this song. It was a different way of playing for all of us."

There's also a different kind of writing on this record. For example, "V.A.L.I.S." The idea for the song, Okereke says, came from a book he read by science fiction writer Philip K. Dick.

"This idea of communicating with myself from a different time — that's essentially what happens to the main character," he says. "They get a warning from themselves from [the] future, and it sends the character on a voyage of self-discovery."

On their own voyage of self-discovery — the band Bloc Party and their front man, Kele Okereke. Four debuted at No. 3 on the British pop charts.