Accessibility links
Against The Odds, A 'Miracle Boy Grows Up' Ben Mattlin was born with a condition called spinal muscular atrophy. Many infants with the disease don't live past age 2, but Mattlin went on to attend Harvard, get married and have kids. "I had this dumb idea from childhood that I could do anything anybody else could do," he says. 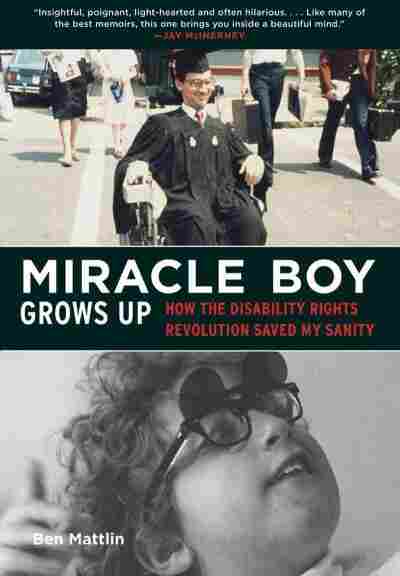 Ben Mattlin has defied expectations for his entire life — starting with being alive at all. Mattlin has a condition called spinal muscular atrophy, and many infants born with it don't live past age 2. But Mattlin grew up to be one of the first students using a wheelchair to attend Harvard. He married, had a family and is now the author of a new memoir, Miracle Boy Grows Up: How the Disability Rights Revolution Saved My Sanity.

Mattlin, whose commentaries have aired on Morning Edition, talks with NPR's David Greene about his condition. "I'm in a wheelchair," he says. "I have a head-rest support because I can't hold my head up. I now drive my chair with a mouth control — a plastic collar around my neck and little itty-bitty joystick I can push with my lips." And, he adds with a laugh, "I wear glasses."

On his experience as a poster child for the Muscular Dystrophy Association, a charity long associated with fundraising telethons publicized by comedian and former MDA chairman Jerry Lewis "My parents kind of believed in it. This was the only organization that existed that would serve them — parents of a child with a neuromuscular disability. First, it was fun — 'I'm going to be famous,' I thought. But after a short time, it got a bit tiresome. ... My final ad was a big full-page ad. ... They had me stand in leg braces and they told me the caption was going to be: 'If I grow up, I want to be a fireman.' I was 6 [or] 7 years old. I was told I had a normal life expectancy at that point [and] I did not want to be a fireman. So I was quite upset. ... I knew I couldn't be a fireman. That was absurd. ... It felt untrue. It felt exploited.

"It gave me a sense of what it meant to be a disabled kid that was not flattering, and did not feel like reality. It made me distance myself from ... my people, from people like me. And when I got over that and came to associate with other disabled people, it was a ... realization that there are some pretty cool people out there and I shouldn't turn my back on that community just because of ... the impression I had of it from these fundraising things that really are not doing justice — and frankly a disservice — to the community they aim to serve."

To One Of The Lucky Ones, The New Year Means More

Valuing Life, Whether Disabled or Not

Valuing Life, Whether Disabled or Not

A Marriage With Special Circumstances

A Marriage with Special Circumstances

"There was a big day — I think it was a friend's college graduation or something — and, coming home, for some reason we were stuck — there was nobody else to lift me. And she said, 'Let me try it.' ... She's only 5[-foot-]2 but I'm not that heavy. And she did lift me into the car, and it was suddenly so liberating — that she could lift me, and we could get in the car and go somewhere and didn't need to rely on anybody else. Ever since, there's been a constant balancing act."

On the people who thought he couldn't be a parent, and how he proved them wrong

"I had this dumb idea from childhood that I could do anything anybody else could do, and it never occurred to me that I couldn't. ... So we just assumed we would have children [and] do all the normal things. We did it not without some trepidation — figuring out what I could contribute as a parent. I think my real strength was entertaining the kids, telling them stories — I became a storyteller. There are a lot of aspects to being a parent, and I wanted to be a part of that — and I think I am and have been and continue to be an active, involved parent."

Read an excerpt of Miracle Boy Grows Up