Accessibility links
The Game That Has Millions Naming That Tune Neda Ulaby looks at SongPop, a rapidly growing music-identification game.

Today, four million people all over the world will log on to Facebook — or take out their phones — and play SongPop. This summer, it's become the fastest growing social game on Facebook, taking a run at old standards such as Farmville and Words with Friends.

Here's how it works: You pick a category like "Funk" or "Classic Rock." It plays you a little bit of a song and lists four titles or artists that might be what you're hearing. When I played "Today's Hits," my choices were the songs "Cowboys and Angels," "I Never Had," "Whistle" and "Dev." You race against a friend to pick the right one.

Music critic Rashod Ollison of the Virginian-Pilot just started playing SongPop Thursday. For him, the appeal is partly about how the game connects Facebook friends and music from back in the day. (And, really, for people of a certain age, Facebook is all about connecting with old friends you don't have much in common with anymore except the music you used to listen to anyway.)

It brought him right back to the '80s, when he and his friends would watch all kinds of MTV videos while waiting for Michael Jackson or Prince to come on. So when he played SongPop this morning, one of the first things he did was click on "'80s Pop."

"Whod've thunk it? I know that Whitesnake song," he laughs. "And I liked it." 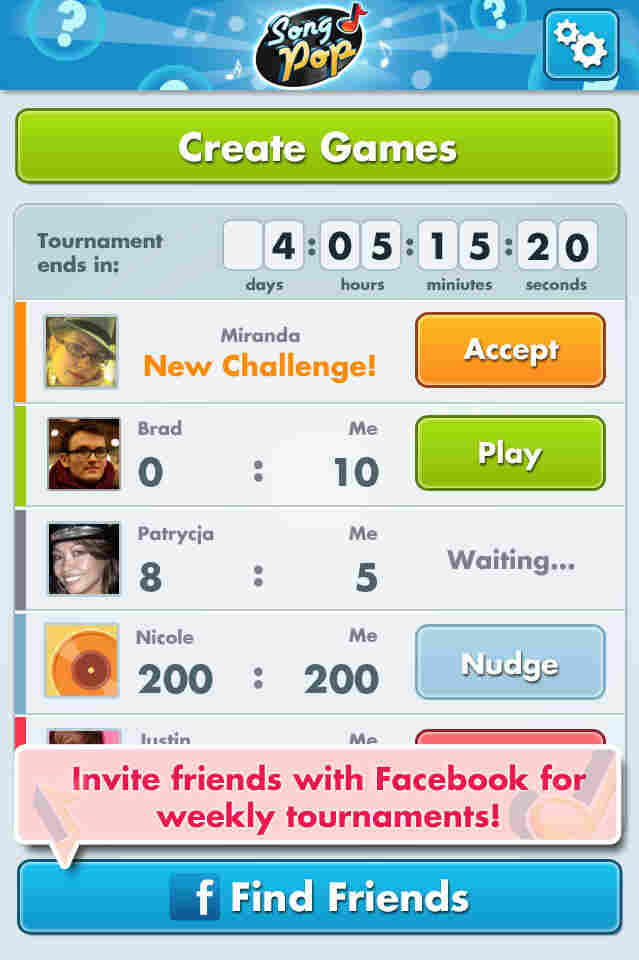 But technology writer Stephanie Humphrey says that the sense of competition is a bit of an illusion.

"You're not actually technically playing against the person in real time, which was a surprise to me," she said. Your opponent's times are actually prerecorded.

About a month ago, 22-year-old Dana Fraser was introduced to the game by an obsessed coworker. She got obsessed, too, and they played all the time. She laughingly declines to specify just how much time they spent.

But now, she says, she's played SongPop so often she started getting the same songs over and over. As with any other little online game, she says there's a point when the fun just wears off.

"It just starts to feel like an obligation that you have to answer these people. It's your turn, and they send you pokes and that kind of stuff." She says she's got a bunch of old games she never plays piled up her phone, and SongPop is now one of them. Think of them as being a little like cassette tapes piled up in the attic.