Accessibility links
Israel Finds Itself A Partisan Election Issue In U.S. The country has featured prominently in past campaigns, but observers say it's different this time. The shift is partially attributed to the GOP's aggressive courting of the Jewish vote and the Israeli government's perceived taking of sides, a charge it denies. 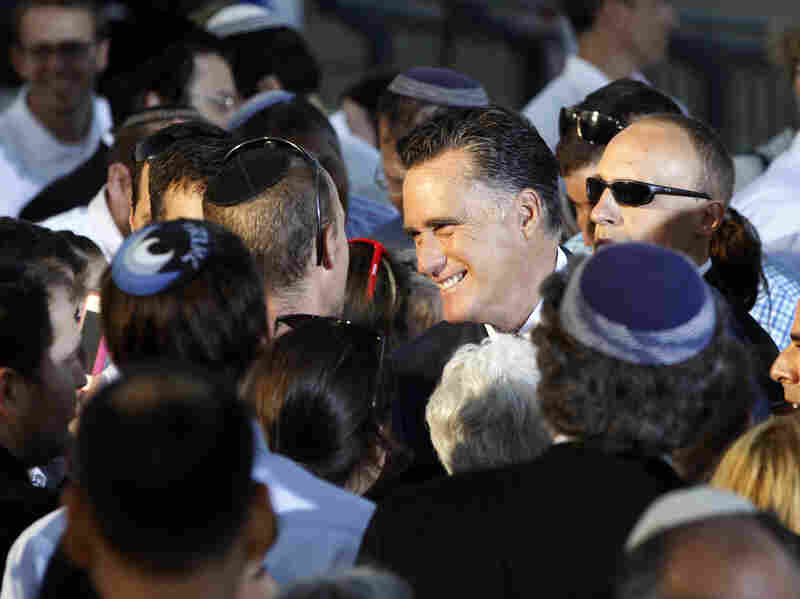 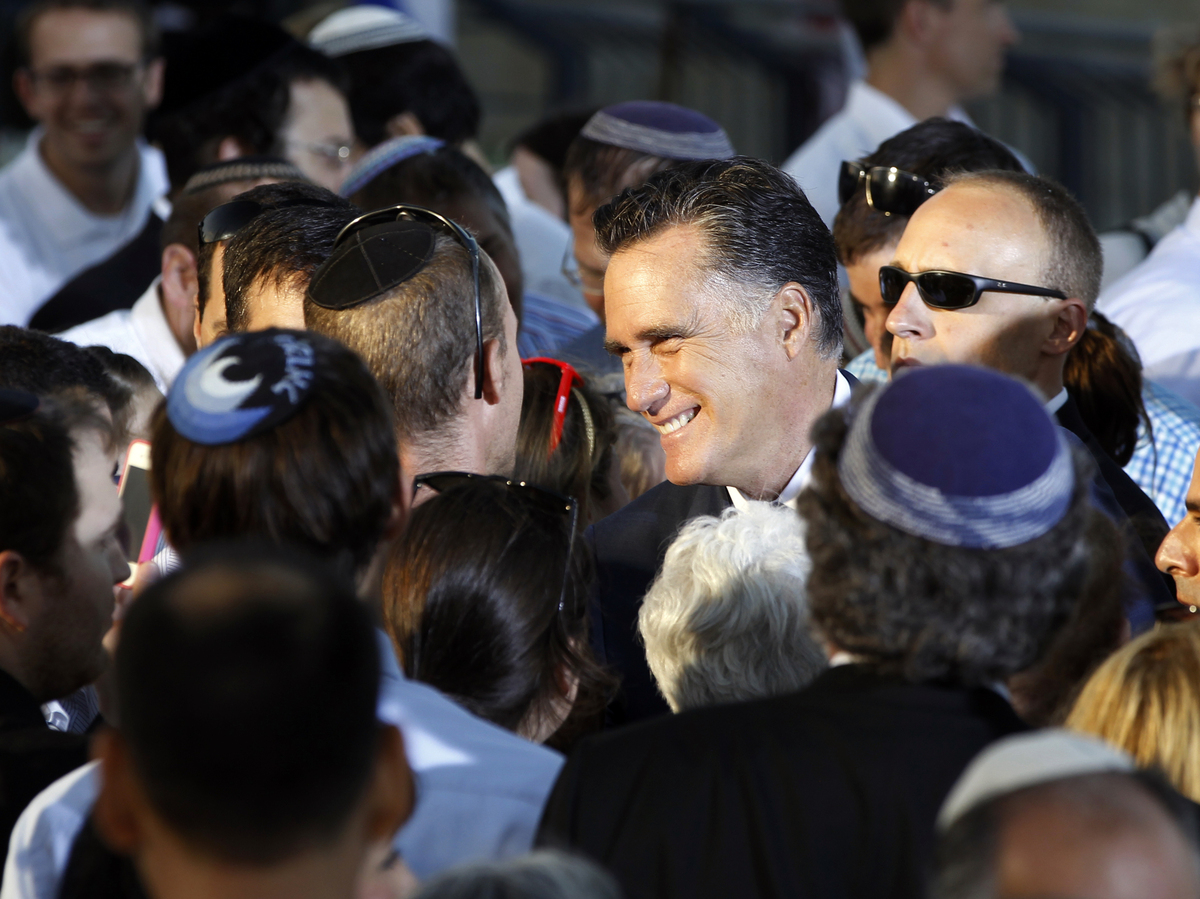 Republican Mitt Romney greets audience members after delivering a speech in Jerusalem on July 29. Israel's new prominence in campaign rhetoric has some in the Jewish state worried.

Although discussion of foreign policy was in scant evidence at the Republican National Convention, one country did loom large in the lineup: Israel.

Republican delegates in Tampa, Fla., were treated this week to images of Mitt Romney's recent visit to Israel. With stirring music and pictures of Jerusalem's iconic sites, the message of the Romney campaign is that the Republican candidate is a better friend to Israel than President Obama is.

Israel has featured prominently in previous campaigns: Obama visited Israel before his election in 2008, as has almost every presidential candidate from both parties before him. But observers in Israel say this U.S. election is different.

"Traditionally, Israel has always tried to refrain from making itself an issue, refrain from superimposing itself onto the political process in the U.S.," says Alon Pinchas, the former Israeli consul in New York and a commentator on U.S.-Israel relations.

He says support for Israel this time around has been made into a partisan cause.

"Inserting Israel as an issue, and by that I mean a wedge issue, it politicizes Israel and that is not only bad for bipartisanship on Israel, it is bad for Israel," he says.

Pinchas says there are several reasons for the shift. The first is that Republicans are now aggressively going after the Jewish vote in the U.S., which was always seen as reliably Democratic.

Inserting Israel as an issue, and by that I mean a wedge issue, it politicizes Israel and that is not only bad for bipartisanship on Israel, it is bad for Israel.

He says there is a perception of frosty relations between Israeli Prime Minister Benjamin Netanyahu and Obama that has allowed the Republicans to make the case that the president is less supportive of Israel than his rival.

Here in Israel though, Netenyahu's right-wing government is also being blamed for the change in rhetoric. Analysts say members of his party and the governing coalition have been much more vocal in taking sides.

"We can say it very clearly, President Obama was not a friend of Israel in the last four years," says Danny Danon, the deputy speaker of parliament and a member of Netanyahu's Likud Party. "We tell the American people, elect whomever you want but regarding Israel we want to see a different kind of relationship with the White House.

"I think the issue of Israel should be a hot topic in the upcoming elections because what is happening here in the Middle East is affecting what is happening in the United States," he says. "I think it's a valid issue."

Danon is publishing a book in the U.S. next week called Israel: The Will to Prevail, which has been timed for release just before the November elections. It denounces Obama's polices in the Middle East.

"I'm not a Republican or a Democrat, but I think we need to tell the truth to our friends," he says. "I think when it comes to Iran, the American people should ask who will be a better leader to deal with the threat coming from Iran."

"Netanyahu has not acted wisely enough in order to maintain Israel's neutrality, traditional neutrality in relation to the American election," he says.

Ezrahi says it's clear that Netanyahu would prefer a Romney presidency. But while that might be good for Netanyahu and his government now, it would be bad for Israel in the long run, Ezrahi says.

"He has brought about consequences that actually damage the vital interests of the state of Israel," he says.

"I think we shouldn't be seen as helping one side against the other," he says. "I don't think we do that."

But Ezrahi says Israel is now a political issue in the U.S. — and that is unlikely to change.