Accessibility links
Kofi Annan On Syria, Hard Choices Of Peacekeeping The Nobel Peace Prize winner and former secretary-general of the U.N. has co-authored a book on his life's work, Interventions: A Life in War and Peace. He spoke with NPR's Scott Simon about difficult experiences involving Kosovo and Rwanda, as well as the future of Syria. 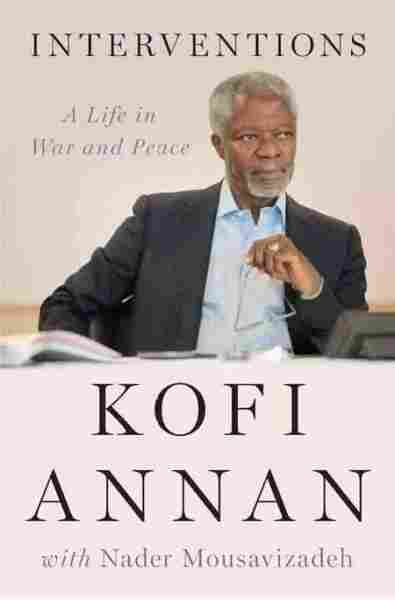 A Life in War and Peace

by Kofi Annan and Nader Mousavizadeh

Kofi Annan has dedicated his life to seeking peace. The Nobel Peace Prize winner was the first career United Nations staffer to become secretary-general, after having been an assistant secretary-general for human resources, then for finance, and finally the head of Peacekeeping Operations, where he would be sorely tested by devastating wars in Somalia, Rwanda and Bosnia.

Annan was secretary-general — the first from sub-Saharan Africa — for two terms. Most recently, he served as the joint U.N. and Arab League envoy to Syria, though he quit that post in August, criticizing the U.N. Security Council for its failure to take action in the region.

Annan has written a book about his life's work, Interventions: A Life in War and Peace, with Nader Mousavizadeh. He spoke with NPR's Scott Simon about his attitudes toward using force, the decisions he has made, and what future he sees in Syria.

On whether there is always a peaceful solution

"No, I think there may be times when you cannot find a peaceful solution, but at least one should try. But there may be times when peace is not enough. On Kosovo for example, for the first time, as secretary-general of the U.N., I ... endorsed military action in Kosovo, arguing that there are moments when you need to put force at the service of peace. Because we had seen what had happened in Bosnia, and for me it was unconscionable that the world should sit back and let it get repeated in Kosovo."

On declining an urgent call for action in Rwanda

"[Gen. Romeo Dallaire, the Canadian general who was head of the U.N. peacekeeping mission in Rwanda] indicated in that cable [sent in January 1994] that it could be a trap. But more importantly, he did not have the capacity to take on that operation, nor did he have the mandate, and mandate is an important issue for U.N. operations. Secondly, we do not have troops; we borrow troops from governments. If we are seen as taking undue risks with those men and women, often the governments either withdraw them or sometimes even tell them not to obey the instructions of the commander on the ground.

"I, at the time, agreed with Dallaire that if he had had 5,000 men, he could have made a difference. I personally talked to dozens of member-states, and nobody wanted to offer troops. And I recall at that point saying, if even genocide cannot make us move, what will propel us to stand up and protect our fellow human beings? It was a very painful period, not just for me, but for all those working in the department, and particularly for Dallaire and the men on the ground — the sense of hopelessness, wanting to help, wanting to confront these people, but simply not having the capacity to do it.

On why the U.N.'s blue helmets inspire cynicism on the ground

"I can understand it, and perhaps part of the problem is also our fault, in the sense that we don't take steps to lower expectations. Questions of inadequate mandate [and] lack of resources don't really mean much to the desperate person on the ground who's looking for salvation. And therefore, we sometimes get blamed even for trying — and on most occasions, we are the only ones trying."

On why he resigned his post as U.N. and Arab League envoy to Syria

"Let me start by saying that the first group that should take responsibility for the failure is, first of all, the government and its intransigence, and its refusal to implement faithfully the six-point plan. And the opposition, which eventually also gave up and decided to accelerate its military actions to confront the government — and in fact, I think one of my biggest disappointments, which I will share with you, was on the 30th of June. We had a difficult but a constructive meeting in Geneva, to discuss a political transition. They agreed on a communique, but on the 19th of July, when the council eventually acted, the resolution was vetoed by Russia and China. ...

"I felt undercut, and I also felt that perhaps I was seeing the problem differently than they were, because honestly I don't see a military solution in the Syrian crisis. The mosaic of Syrian society is such that we need to put on the table an agreement or a settlement that ensures that interests of each group is looked at, whether they are Christian, Druze, Suni, Shia, Alawi, Kurdish — so that the protagonists know what the option is, that you can stop fighting but it doesn't mean you'll lose everything. Your interests will be protected."

On whether peace is possible under Assad

"Assad will have to go. You cannot remain in power when so many people have been killed and are dying. No leader can retain legitimacy after this. The question is how he goes, and when he goes."