Accessibility links
George Takei Takes Story Of Internment To The Stage The actor was born in 1937 to a Japanese-American family that, after Pearl Harbor, was sent to live in internment camps for the duration of World War II. His experience growing up in the camps inspired a new musical, Allegiance, which Takei also stars in. 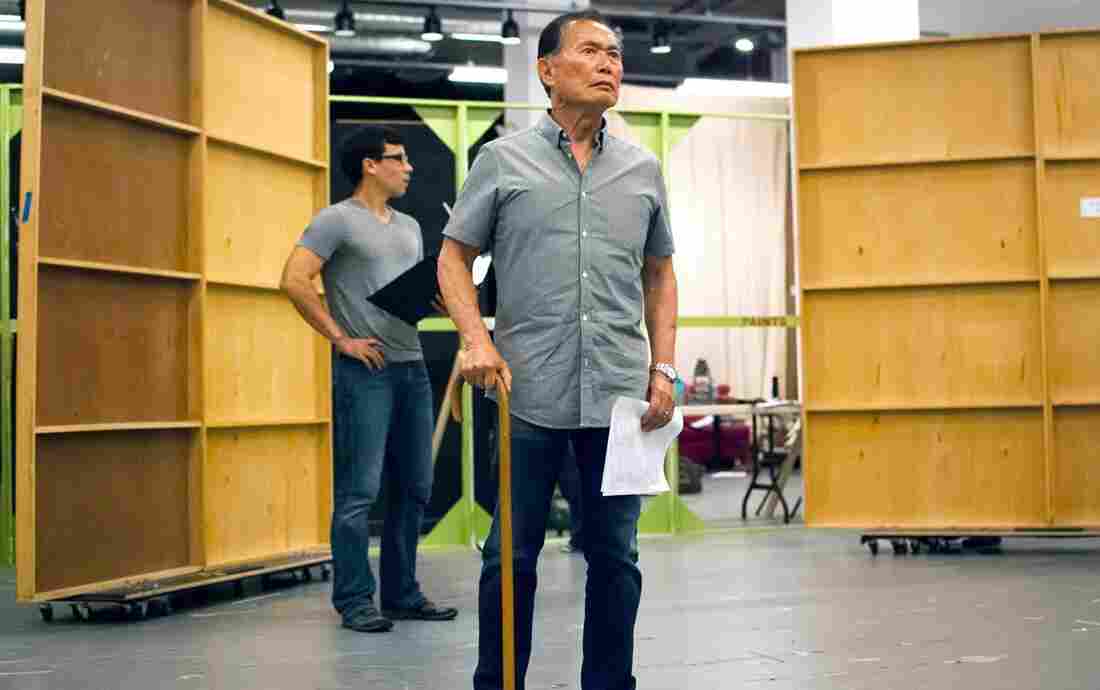 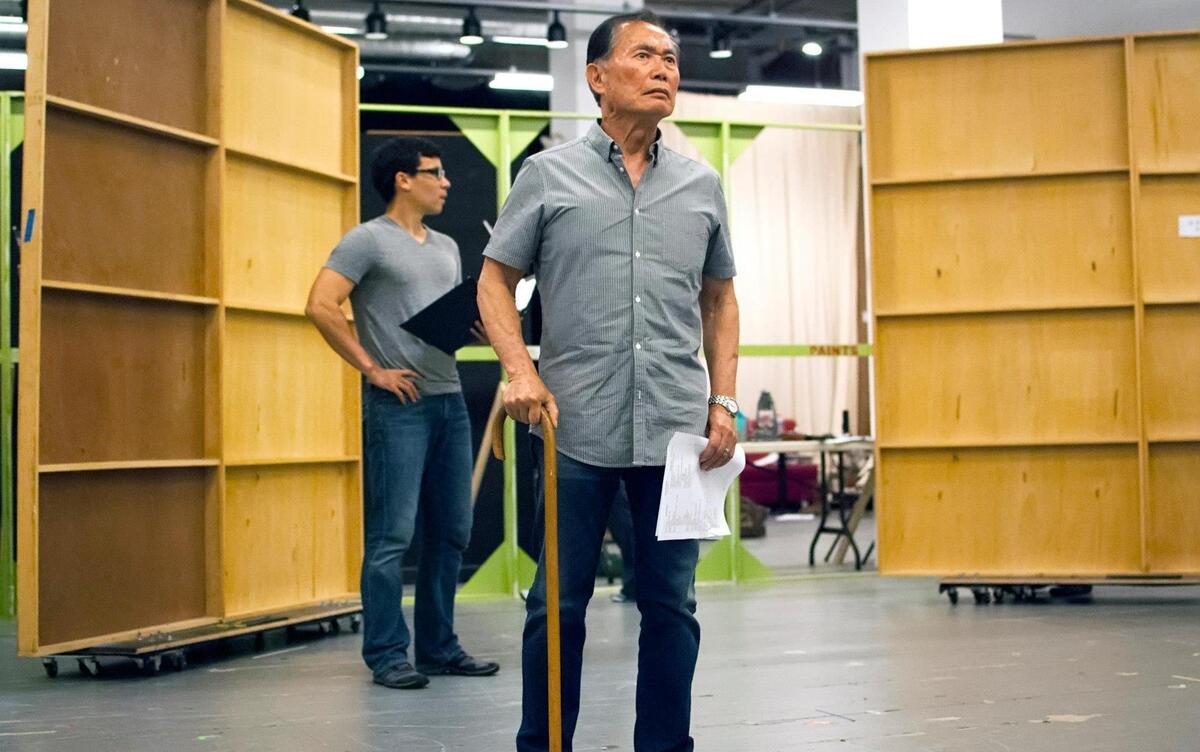 Jeffrey Weiser/Courtesy of The Old Globe

Today, George Takei is best known for his role as Hikaru Sulu on the original Star Trek series and, more recently, his hugely popular Facebook and Twitter feeds.

George Takei talks about becoming an actor, his voice, and 'Oh my!'

But his latest project aims to bring a different kind of story to the stage, one with personal and historical resonance. The actor was born in Los Angeles to a Japanese-American family just a few years before Japan's bombing of Pearl Harbor. After that 1941 attack, he and his family were among the tens of thousands of U.S. citizens of Japanese descent who were forced to move to internment camps.

Now, Takei's childhood experience living in camps in Arkansas and California has inspired a new musical called Allegiance. Previews of the show are set to begin Sept. 7 at The Old Globe Theatre in San Diego.

Takei plays two characters in the show: Ojii-San, the grandfather of a family in an internment camp, and Sam Kimura, a 77-year-old former internee whose story is told from the present day. Takei joined NPR's Scott Simon to discuss his experience of internment and the importance of remembering the darker chapters of American history.

On his own family's story of internment

"We were first taken from our home ... in Los Angeles to a horse stable at a race track, San Anita Race Track, near Los Angeles. And we were there for a few months while the camps were being built. And from there we were taken to the swamps of southeastern Arkansas. So, all the Japanese-Americans that were incarcerated followed that pattern: first, what's called an 'assembly center,' a very innocuous-sounding name, and from there to a 'relocation center,' another innocuous word." 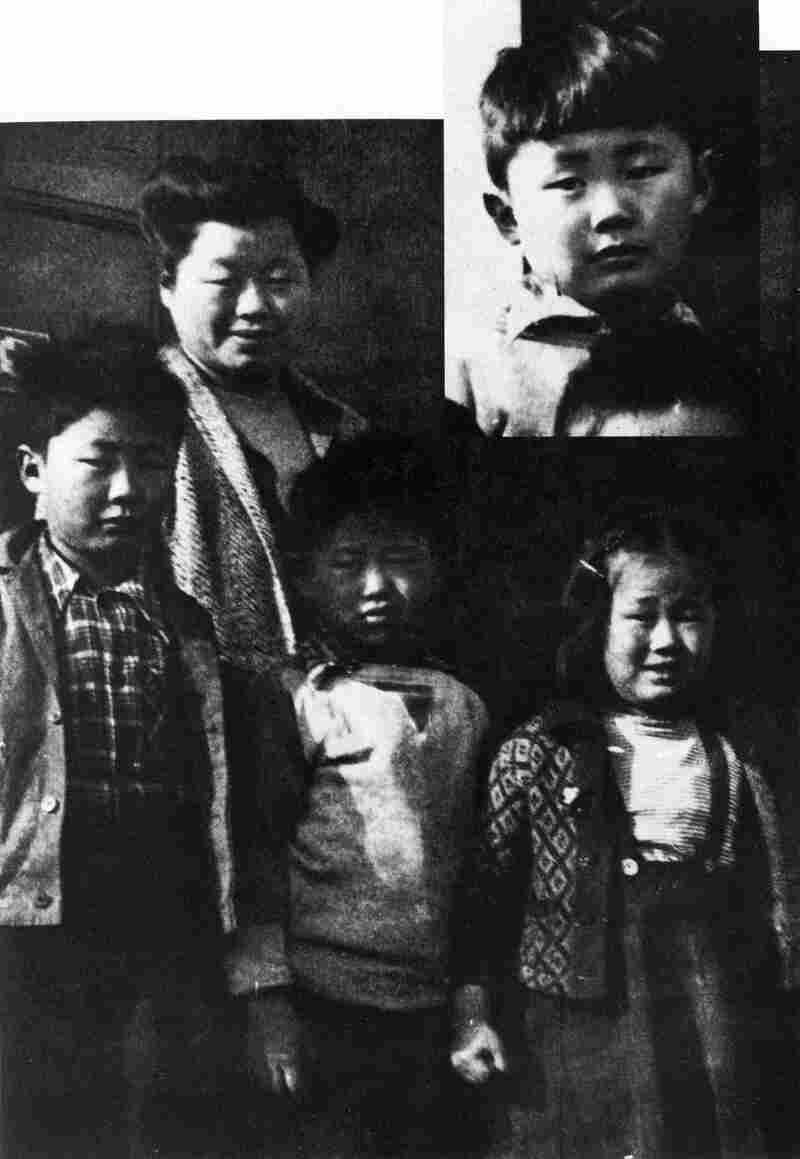 George Takei (left) stands with his mother and siblings during their internment at Camp Tule Lake in California. The inset image at top right shows Takei as a kindergartener at Camp Rohwer in Arkansas. Photo courtesy of George Takei hide caption 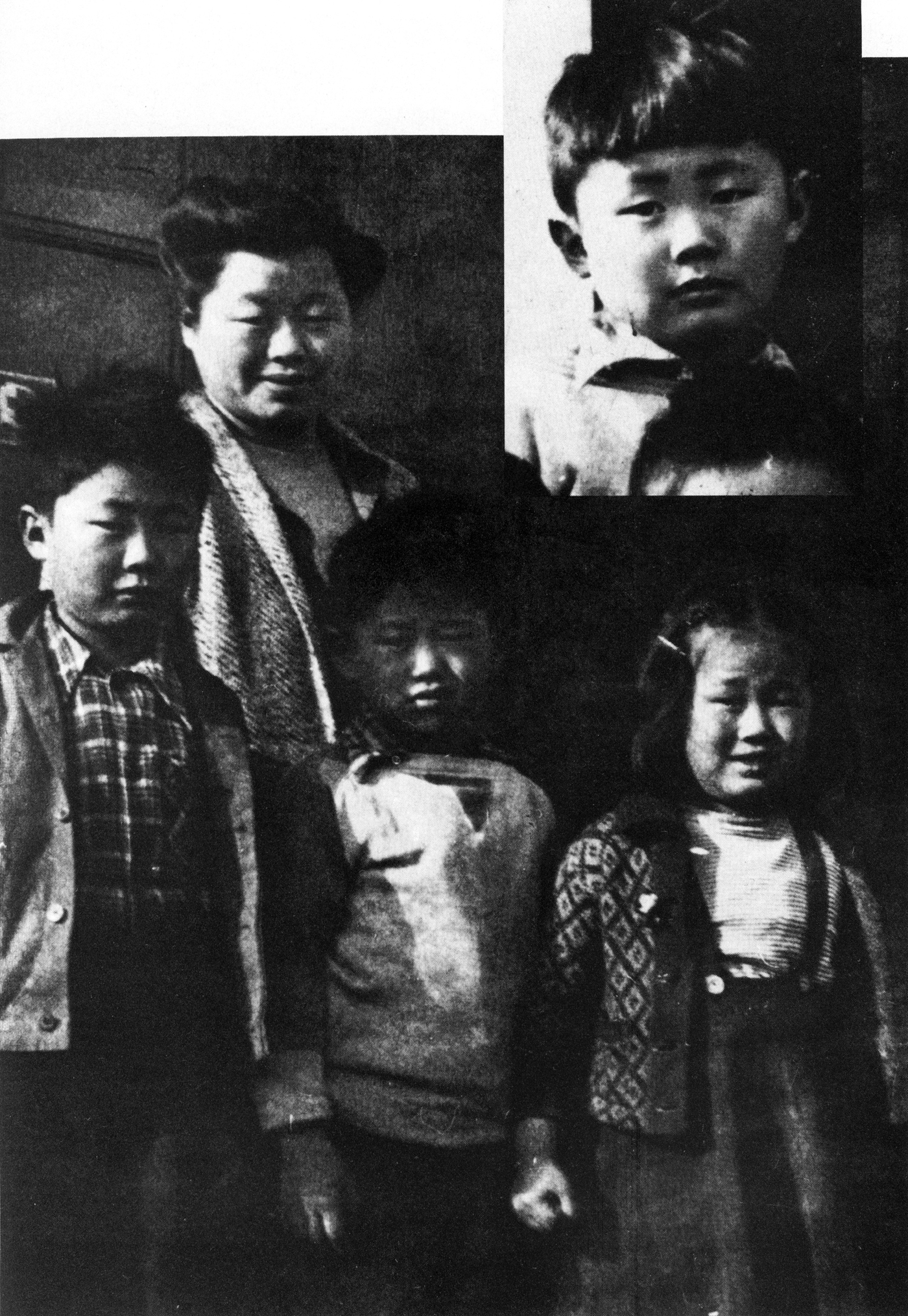 George Takei (left) stands with his mother and siblings during their internment at Camp Tule Lake in California. The inset image at top right shows Takei as a kindergartener at Camp Rohwer in Arkansas.

"He is one of the thousands of young men who went from barbed-wire incarceration to [putting] on the same uniform as that of the sentries that guarded over us, and served in the military. He was sent over to the battlefields of Europe with an all Japanese-American, segregated unit, the 442nd Regimental Combat Team, and faced the hell of war, the horrors of war. And the 442nd Regimental Combat Team returned from those bloody battlefields as the single most decorated unit of the entire war. And the character I play is 'hard as granite' because he went through that hell and came back."

"I was invited to the White House when members of the 442nd were finally given the Medal of Honor, the highest military recognition that the nation can grant. And after the ceremony, I asked one of them, 'How were you able to do what you did when this government treated you and your family so shabbily?' And he said, 'Well, George, when I was a kid, I began the school day every morning with the Pledge of Allegiance to the flag, and I meant every word of it. But this government didn't think that I was American enough and so, by gum, I went out there to show them what kind of American I am.

"But there [was] another group of people who I admire equally. They're the ones that said, 'Yes, I'm an American and I will fight for this country, but I won't go as an internee from behind these barbed wire fences, leaving my family in imprisonment. I will go only on the condition that I go as an American; that I can report to my hometown draft board with my family in our home, and then I will serve.' And for that courageous and principled stand, they were tried and found guilty of draft evasion and put into federal penitentiaries. And that is the drama of this musical." 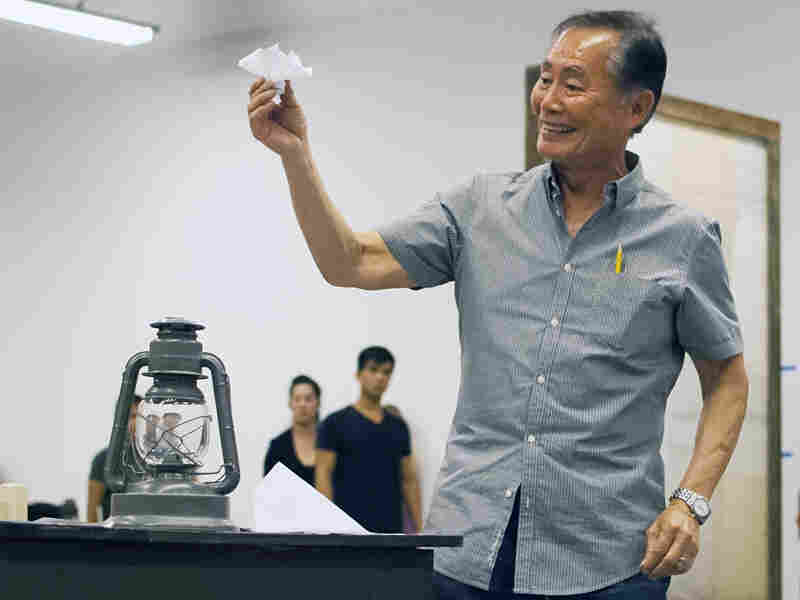 Takei rehearses a scene in which his character, Ojii-San, tries to cheer his granddaughter up by making her an origami flower out of a loyalty questionnaire. Jeffrey Weiser/Courtesy of The Old Globe hide caption 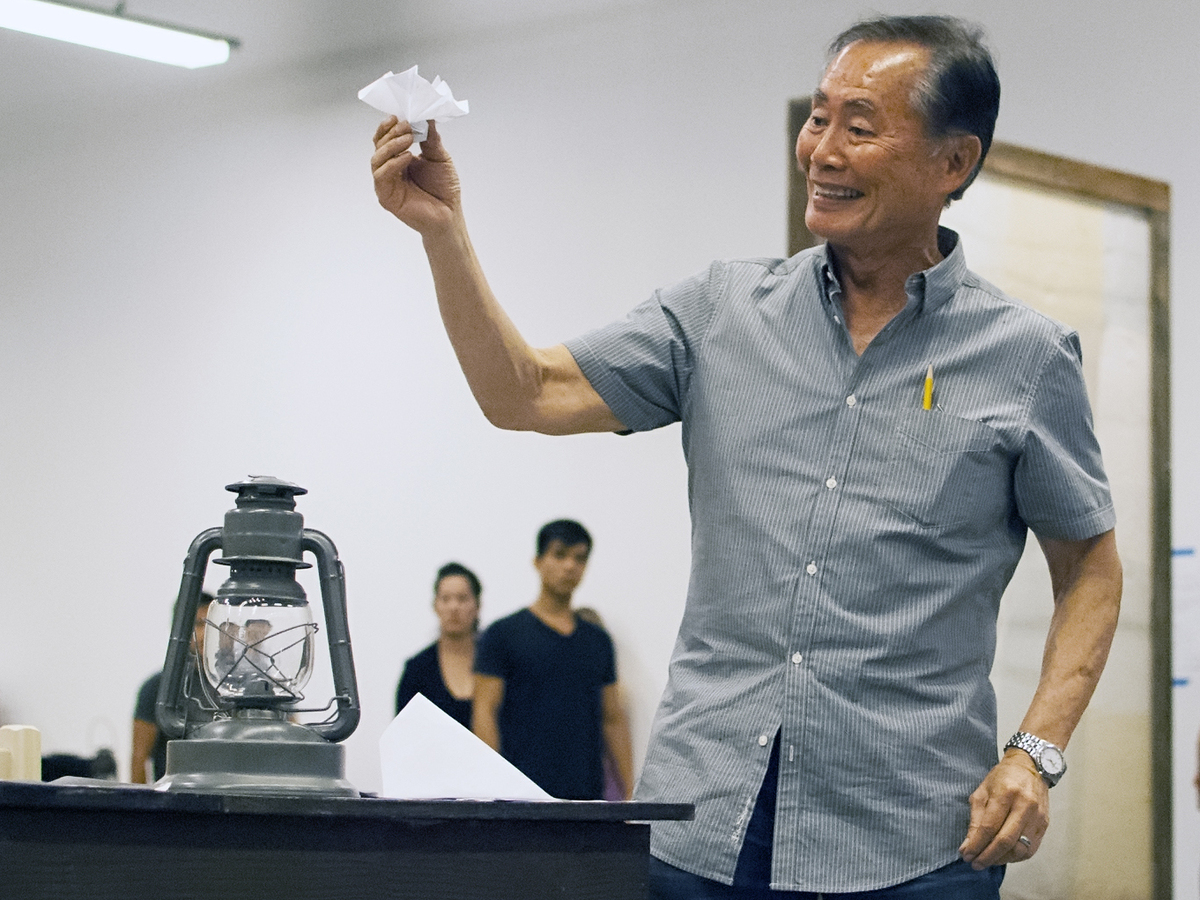 Takei rehearses a scene in which his character, Ojii-San, tries to cheer his granddaughter up by making her an origami flower out of a loyalty questionnaire.

Jeffrey Weiser/Courtesy of The Old Globe

"It was the sheet of paper that was to ascertain the loyalty of people that the government had imprisoned on the suspicion — merely the suspicion, not the guilt — of being potential spies, fifth columnists, traitors. Everyone over the age of 17 had to respond to it whether you were male or female, citizen or noncitizen. ... Question 27 asked 'Will you bear arms to defend the United States of America?' — this being asked of an 87-year-old immigrant lady as well as a 17-year-old young man. Even more insidious was the next question, Question 28. It asked, and I'm paraphrasing, but essentially it said, 'Will you swear your loyalty to the United States of America and foreswear your loyalty to the emperor of Japan?' The government assumed that if you're born with this face — even if you're an American, never been to Japan — that we are born with an organic, inborn loyalty to the emperor. It was offensive and the amazing thing was that so many young people answered yes to those two offensive questions and went and served."

"We were from Los Angeles. We came back to Los Angeles because my parents didn't want to go to another unknown place that might be even more hostile in a different way. But indeed it was a different Los Angeles we came home to. Housing was next to impossible. Our first home was on Skid Row in downtown Los Angeles. And to us kids — I was the oldest, I was 8 years old when we came back — it was terrifying. All those scary, smelly, ugly [people] leaning on the walls or staggering around or falling right down in front of us on the sidewalk; the stench of urine on the street in the hallways everywhere. It was horrific. In fact, my baby sister said, 'Mama, let's go back home,' because we had adjusted to the routine of incarceration and it was home."

A Dark Chapter Of American History Captured In 'Colors'

The Creative Art Of Coping In Japanese Internment

On how his performance in Allegiance fits into his career

"I see Allegiance as my legacy project. The story is very important to me and it's been my mission in life to raise Americans' awareness of that shameful chapter of American history. I think we learn more from those times in our history where we stumbled as a democracy than we learn from the glorious chapters. We have the history of slavery or inequality to women, and now the civil rights movement of the 21st century is the struggle for equality for the gays, lesbians, bisexuals and transgender people. And I think it's important for Americans to know about the times that we failed, and Allegiance tells that story."