Accessibility links
Occupy Movement Targets Charlotte, N.C., For Resurgence Occupy Wall Street says it will protest at the Democratic National Convention in Charlotte, N.C., next week as a run-up to mass demonstrations planned for its Sept. 17 anniversary. 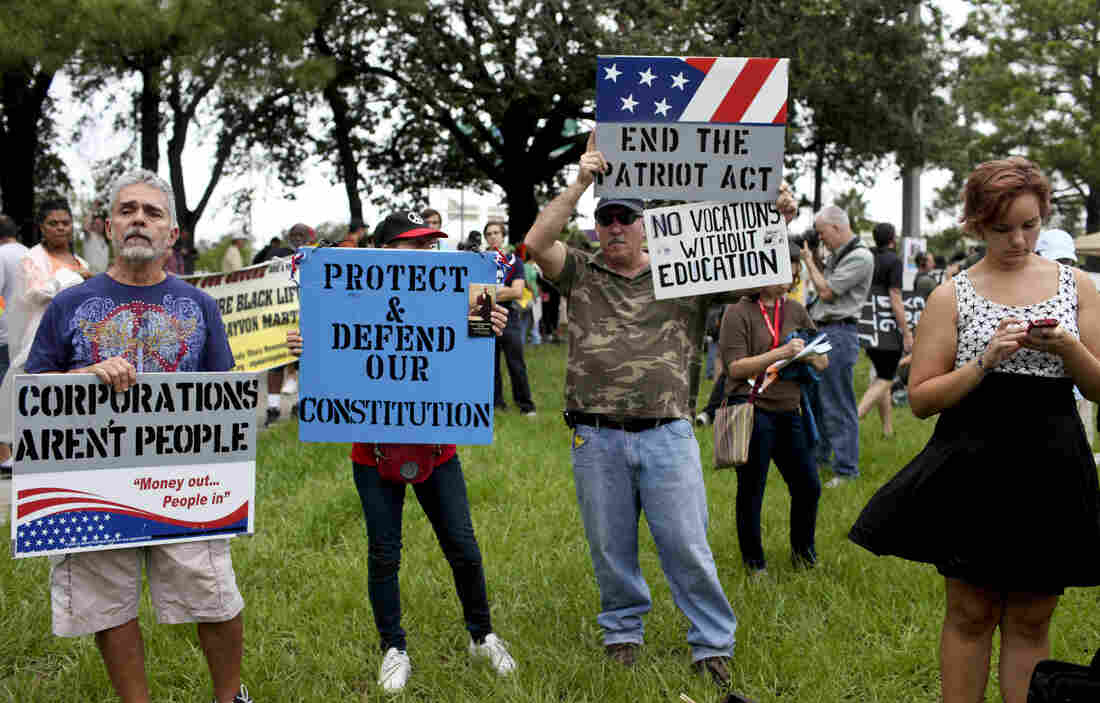 From left, Mike Garcia, Terri Schultz-Rivers, Tim Rivers and Alissah Depiro, all of Tampa, attend a rally and march organized by the Occupy movement in downtown Tampa on Monday. Turnout was much lower than expected, and rain drenched the crowd. Becky Lettenberger/NPR hide caption 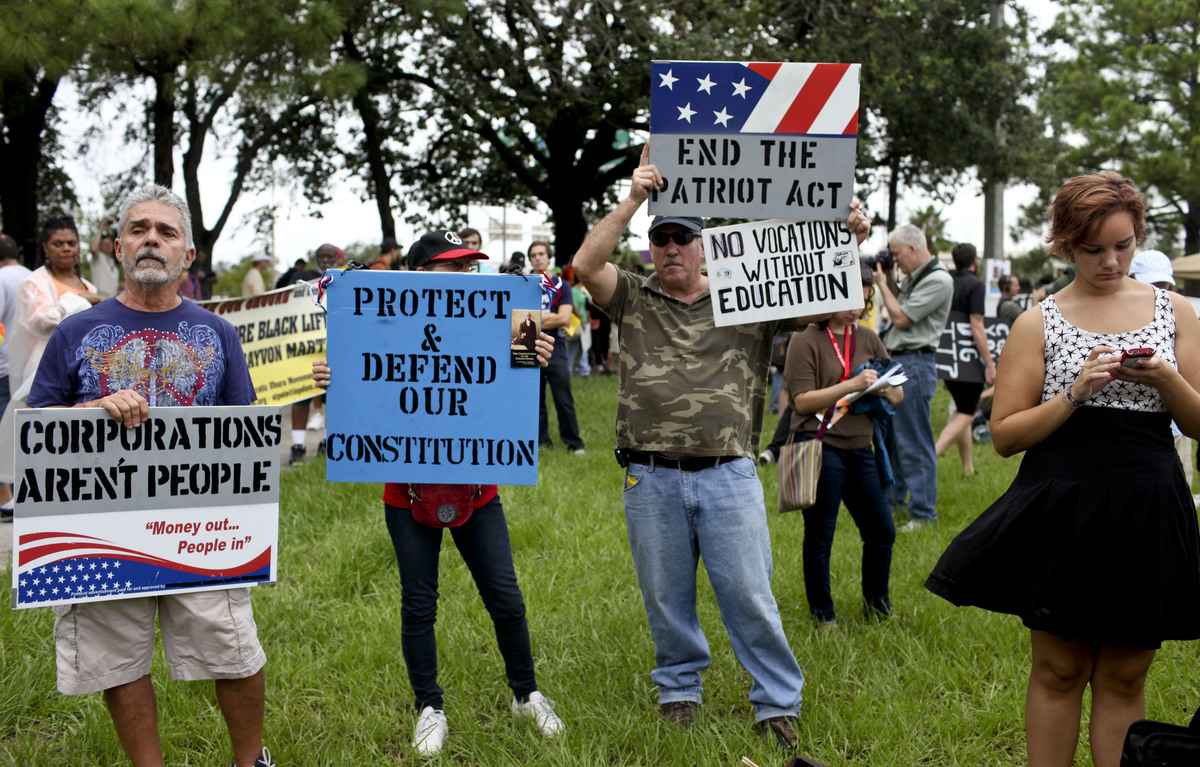 From left, Mike Garcia, Terri Schultz-Rivers, Tim Rivers and Alissah Depiro, all of Tampa, attend a rally and march organized by the Occupy movement in downtown Tampa on Monday. Turnout was much lower than expected, and rain drenched the crowd.

As President Obama reintroduces himself to America at the Democratic National Convention in Charlotte, N.C., next week, the Occupy movement will be there trying to do the same.

Remember Occupy Wall Street, originator of the "We are the 99 percent" slogan?

The group, which helped reshape the nation's political discourse last year before falling into disarray and uncertainty, plans to hold a demonstration outside the convention hall in an effort to recapture the spotlight. A Tampa, Fla., Occupy group protested at the Republican convention in there last week.

Organizers hope to build anticipation for mass demonstrations in the works for the Sept. 17 anniversary of Occupy Wall Street, which started in New York City and inspired the formation of Occupy groups across the United States.

"We're definitely in a process of taking our organizing around Sept. 17 and using it as a launch pad for what the organizing body will be," Occupy Wall Street spokeswoman Dana Balicki says. "We don't know what it is yet."

The absence of a clear strategy has hindered the Occupy movement for months. The group's leaderless structure has delayed efforts to reach agreement on new objectives for multiple causes, such as debt, housing and the environment. The reduced activity has slowed fundraising and participation has dropped.

And since the widespread, but brief effectiveness of their encampments last fall, occupiers continue to debate new tactics.

"What we're collectively wondering about is 'What's Occupy 2.0?' " says Columbia University professor Todd Gitlin, author of Occupy Nation: The Roots, the Spirit, and the Promise of Occupy Wall Street. "The initial wave moved its metaphors into the household conversation and shaped politics. But I think they essentially reached the limits of what they could achieve. Now there's a sorting process."

The attacks being slung between the two presidential campaigns over economic inequality, corporate excess and wealthy Americans paying their "fair share" of taxes are owed largely to the Occupy movement, which tapped a reservoir of public anger at America's financial and political systems in the slow economic recovery.

The movement took hold in response to the Canadian magazine Adbusters' call for protests against American financial institutions. Thousands swarmed Zucotti Park in Lower Manhattan's Financial District and camped there for two months. The methodology was inspired by the protests in Cairo's Tahrir Square, which led to Egypt's revolution in 2010.

Last September, America's political conversation had been dominated by federal spending cuts and deficit reduction. Occupiers succeeded in pushing the nation into a discussion about corporate excesses and income inequality.

One report found that news media references to "income inequality," a phrase seldom mentioned in the press, had exploded by nearly 500 percent.

But when the encampments were cleared in New York and other cities, the movement lost momentum. Protests lost their intensity and followers peeled away. Daily coverage on cable television and in other news media shifted to the Republican presidential primaries. 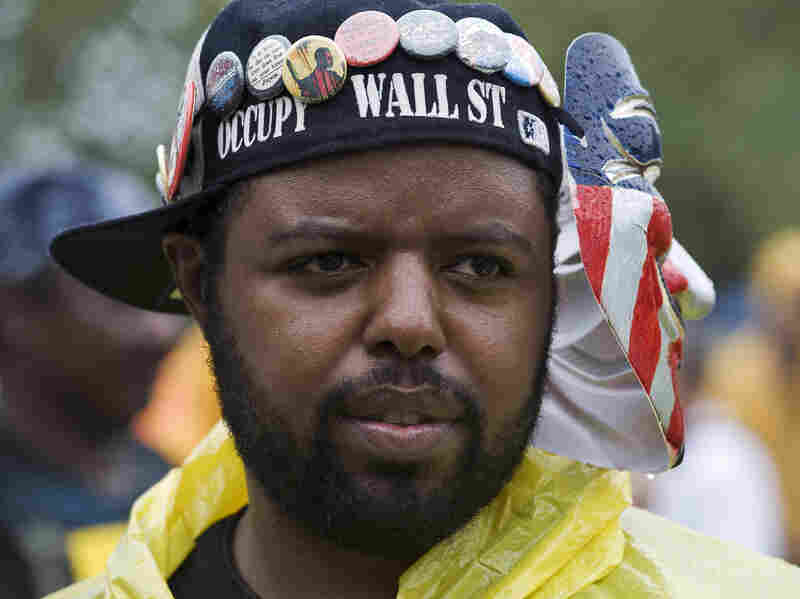 Occupy Wall Street activist Jason Woody listens to a speaker during a rally before the start of the Republican National Convention in Tampa, Fla., on Aug. 27. Steve Nesius/Reuters/Landov hide caption 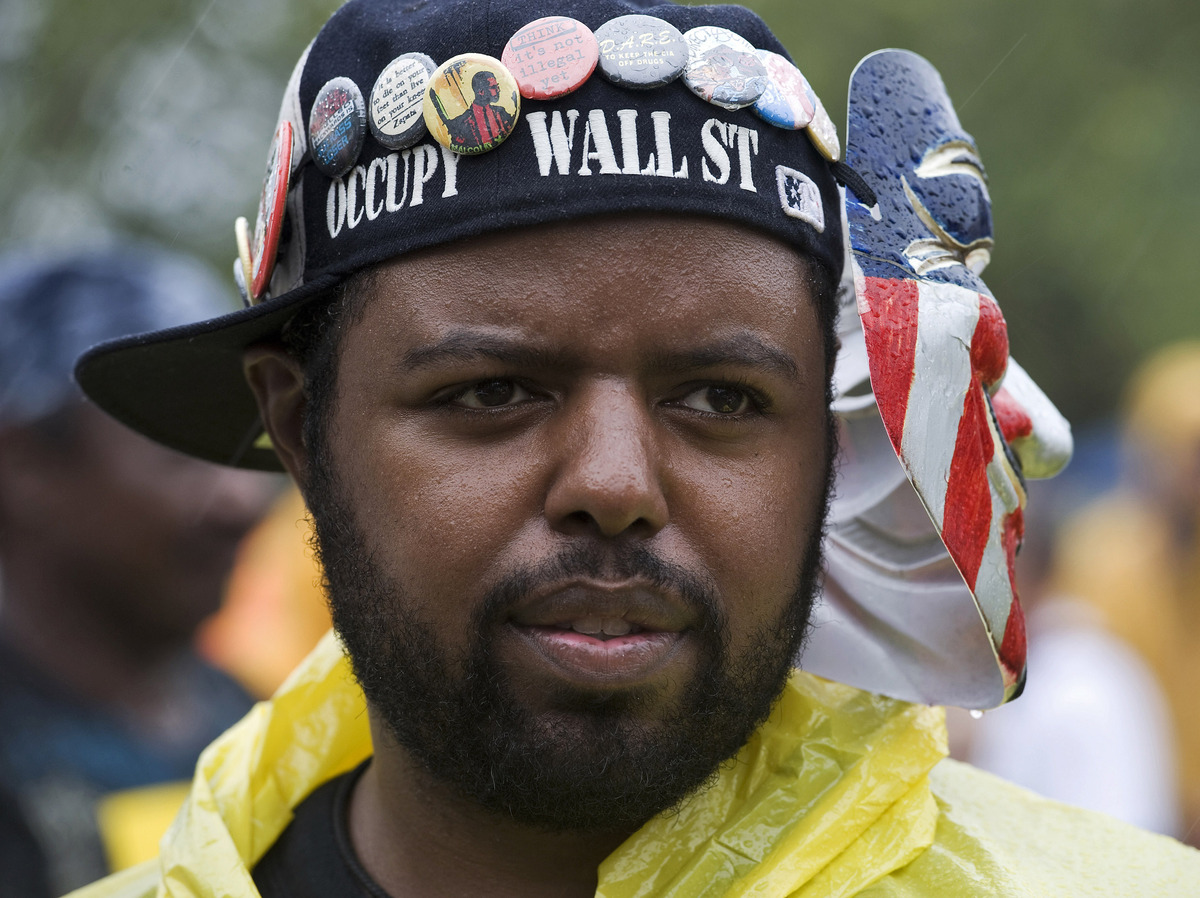 Occupy Wall Street activist Jason Woody listens to a speaker during a rally before the start of the Republican National Convention in Tampa, Fla., on Aug. 27.

"Obviously with the loss of the media glare we definitely lost some of our power, and I think the efforts of the police and government agencies did succeed in sucking out some of the morale," Occupy Wall Street organizer Karanja Gacuca says.

But many other Occupy organizers and observers agree on a more basic cause: With no land to occupy, the movement suddenly was adrift.

"When you lose the space, you can no longer think of yourself as an occupier," Amin Hussein, another leading Occupy Wall Street organizer, says. "All we did was think about how to regain our space, and we lost the 99 percent."

The movement was hobbled by its decision to eschew the use of office space or a home where activists could meet and plan. Hussein says, "You didn't have to have a unifying thing because the space brought people together."

Over the winter, Occupy organizers held meetings to discuss next steps. They abolished the general assembly and pulled back from demonstrations. As they tried to retool, they watched progressive, labor and other groups aligned with OWS borrow its message, including for political demonstrations.

Many occupiers were angry and accused the groups of trying to co-opt their movement for the Democratic Party. Adbusters blamed one of the groups, MoveOn.org, for the "derailment of our movement."

Occupiers expected to enter a new phase of activism following May Day protests, which included the participation of labor, progressive and pro-immigrant groups in 100 cities. But then these groups shifted their attention to this year's elections.

"We went through so much pain and agony for May Day on the hopes that we would have a coalition for the day after, but that didn't happen," Hussein says.

Occupy Wall Street says it has made significant progress in recent planning. It has replaced the general assembly with an affinity spokes council, made of working groups on a variety of issues. The council meets on Fridays. "One of the attempts is to create more accountability for how we create a collective movement," Balicki says.

The group has identified four primary issues to target: debt, including student loans as a subtopic; housing; the environment; and removing money from political campaigns (primarily the unlimited spending by superPACs).