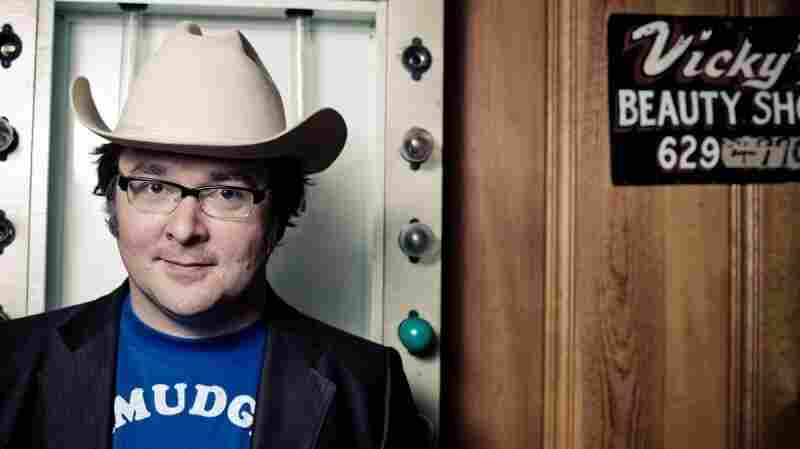 Hope We Make It On Love

Waiting All Night is available from Electric Western Records

Every Tuesday night at the 5 Spot, some 200 people show up the East Nashville bar for Two Dollar Tuesdays: a $2 coverage charge, $2 beers and five musical guests. It's hosted by Derek Hoke, an unassuming, laid-back guy with the cowboy hat and retro-vintage eyeglasses.

"I call it a speed showcase," Hoke says. "Everybody plays five songs, and I tell them to play the 'best of' — you know, get up there, kill and get off. There's somebody coming up right after you, and we have to plow through this thing."

But many of the regulars at the 5 Spot come as much for Hoke's own music as for his Tuesday night line-ups. Hoke just released his second album, Waiting All Night, and describes his crowd-pleasing music as "quietbilly."

"Me and my producer friend Dexter Green — I just had all these songs, and I was singing them very quietly, but the instrumentation of it was a rockabilly band: upright bass, rockin' snare drum," Hoke tells NPR's Melissa Block. "But we had it all kind of toned down to where I'm kind of crooning on top of it, if you will, instead of doing total JD McPherson or whatever. We called it 'quiet rockabilly,' so 'quietbilly.' "

Like McPherson, Hoke wound up in the country and rockabilly sphere after starting with punk.

"I still have a huge affinity for bands like Fugazi and things like that," Hoke says. "I also have a huge affinity for old country music, and some new country music, as well. The correlation between the two is they're still very simple forms of music. Punk's three chords. Hank Williams is three chords. It's just a different way of expressing yourself, either through a Marshall amp or through a mandolin."

Strumming a medium tempo and featuring a hiccuping electric guitar, "So Quiet" is about a woman Hoke's father was either dating or was married to. (Hoke is fuzzy on the particulars.) "She'd do things like light rolls of toilet paper on fire, which nearly burned down their house. It's about "how that tornado of a person has left your life, and how it's so quiet around here now."

"Unfortunately, my father passed away before this record came out, but some friends and family know exactly who this person is," Hoke says. "It was a way to get some comic relief out of some craziness."

Hoke says he thinks his father would have appreciated "So Quiet": "I think he would laugh his butt off and shake his head like, 'I can't believe I ever got in that situation to begin with.' "

'Love Is All You Need'

Written during the recession, "Hope We Make It on Love" is about a couple that's lost everything.

"I was watching Dateline NBC, and there was an old couple [from] Palm Springs or something — they're selling their old jewelry at the local pawn shop to buy food," Hoke says. "But they were so in love with each other and happy, that it was just part of their life now. They'd owned the yachts and had the Mercedes and everything, but they remembered the simple things in life: This is all just stuff, and love is all you need."

For Hoke, he's usually in the car when a song comes to him, listening to NPR or just singing out loud with the radio turned off.

"If I sat on the couch with a guitar and a pen and paper, I'm obviously trying to write a song," Hoke says. "But if I'm driving a car, I'm kind of multitasking and not really thinking about it, so I think it comes from a more genuine place, which is wherever songs come from — out of your soul, out of the ether. It seems more natural to me to just start humming and whistling and making a human noise rather than writing ideas on a — like, 'I want to turn this sentence into a song.' I'm kind of terrible at that."

For now, Hoke says he's happy where he's at, but the "little kid" in him still wants to open up for Lyle Lovett or The Mavericks, tour Europe and "keep making little records and keep trucking along."