Accessibility links
For Afghan Girl, Going To School Is Act Of Bravery Like countless other Afghan girls, Rahmaniya yearns to go to school. But her older brother wants her to stop going and to get married — and is threatening to kill her if she doesn't. Her plight highlights the difficulties many girls still face in the Taliban heartland if they want to get an education 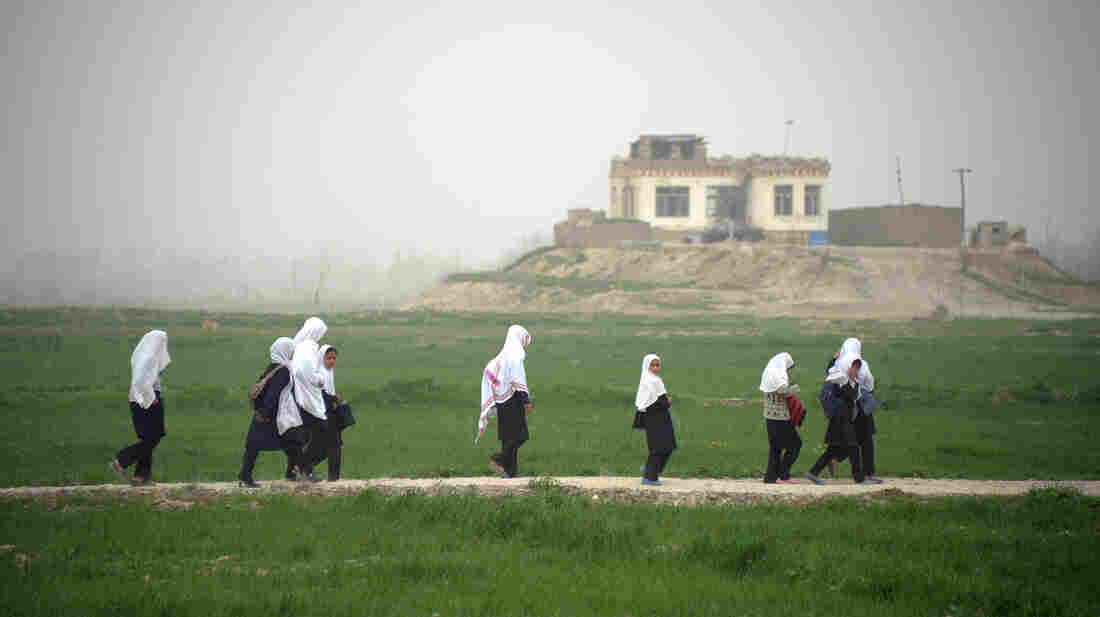 Afghan girls walk home from school in Kunduz province earlier this year. Despite progress in recent years, girls who want an education face threats from the Taliban and other extremists, and sometimes even their own families. Johannes Eisele/AFP/Getty Images hide caption

In Afghanistan, girls are required by law to go to school. However, many of them never do.

Death threats, acid attacks and bombings by Taliban militants and other extremists lead many parents who support female education to keep their daughters at home.

Sometimes, it's the families themselves who stand in the way. School officials in conservative communities say relatives are often more interested in marrying off their daughters or sisters than in helping them get an education.

If it wasn't a sin to commit suicide, I would. Life has become very bitter.

Rahmaniya, an 18-year-old Afghan girl whose brother says he will kill her for attending school

But some girls, like 18-year-old Rahmaniya, are fighting back.

The 10th-grader in the southern city of Kandahar province says the moments she savors most in her life are those she spends learning.

Rahmaniya, whose last name is being withheld to protect her, says she didn't dare go to school until her father passed away five years ago. He had vowed to disown her if she tried to get an education.

These days, the slight girl with big brown eyes dreams of going to college to study journalism.

But she adds that it's hard to think about the future when her older brother keeps threatening to stab her to death with a knife he carries in his pocket.

"Several times he has beaten me up," she says. "He tells me, 'You go ahead and go to school, and I'll throw acid on you like the Taliban. I'll go to the Taliban, and they'll protect me if I do this in this land of infidels where girls go to school.' "

Rahmaniya believes her brother's anger is rooted in jealousy, since he quit school a long time ago.

Her family, like many in Kandahar, is also struggling to make ends meet, and the teen says her brother wants her to marry. In Afghanistan, dowries bring in a lot of cash for the bride's family.

"But I don't want to get married, at least not before I finish my studies," Rahmaniya says.

Her brother's insistence that she wed is something Rahmaniya says she uses against him.

She explains that when he threatens to blind or maim her, she reminds him that disfiguring her will make it impossible to find a husband.

Still, the threats and beatings have driven Rahmaniya into hiding. She moves every few days from one sympathetic relative's house to another to avoid being found by her brother.

Last week, her mother agreed to help plan her daughter's escape to a women's shelter in Kabul so she could continue her studies in safety.

The plan fell apart when Rahmaniya's mother caved in to family pressure that her daughter marry a relative.

The mother says the man will allow Rahmaniya to attend school after they wed. But her daughter believes that's a lie and refuses to marry the relative.

"If it wasn't a sin to commit suicide, I would," she says. "Life has become very bitter."

Ehsanullah Ehsan, who is director of the Kandahar Institute of Modern Studies, where some 800 girls go to school, says Rahmaniya's case is not unique. He adds that societal taboos are oftentimes as problematic for his students as the Taliban.

"There are many other threats ... extremist threats, warlord threats, tribal lord threats, family honor threats, because still there are families in which education is an honor problem. So these women who are coming here, they are brave to come here for an education," he says.

Ehsan says that bravery has translated into a brighter future for many young women; 300 of his graduates have gotten jobs in Kandahar.

But Rahmaniya says she doesn't want to stay in Afghanistan.

She says she yearns to go abroad, but that she's found no one who can help her.