Accessibility links
As Temps Rise, Cities Combat 'Heat Island' Effect More than 20,000 high-temperature records have been broken so far this year in the United States. It's especially bad in urban areas, where cities are heating up about twice as fast as the rest of the planet. But a researcher in Atlanta is using the heat wave as an opportunity to do something about the warming planet. 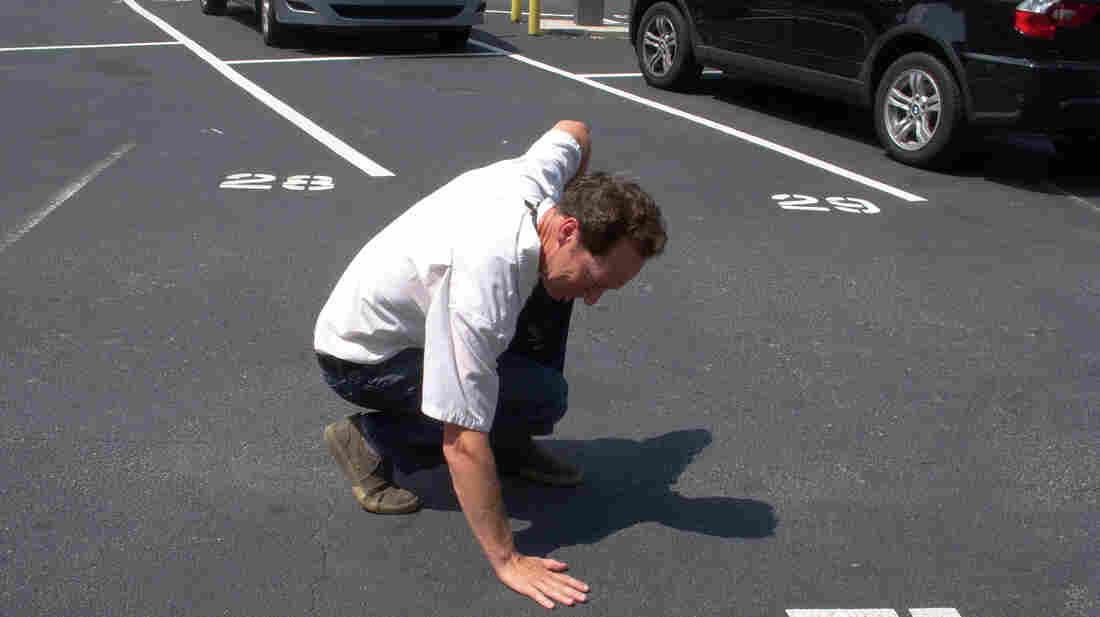 Brian Stone Jr., director of the Urban Climate Lab at Georgia Tech, says that pavement stores heat during the day and makes cities hotter at night. Cities, he says, tend to be heating up at double the rate of the rest of the planet. Richard Harris/NPR hide caption

More than 20,000 high-temperature records have been broken so far this year in the United States. And the heat is especially bad in cities, which are heating up about twice as fast as the rest of the planet.

High temperatures increase the risk of everything from asthma to allergies, and can even be deadly. But a researcher in Atlanta also sees this urban heat wave as an opportunity to do something about our warming planet.

The story starts at Ebenezer Baptist Church, arguably the most famous place in Atlanta; it was Martin Luther King Jr.'s church and the heart of the civil rights movement.

It's now playing an unexpected role in a new movement: the struggle against rapidly rising urban temperatures. Cities are literally global hot spots.

Brian Stone Jr., director of the Urban Climate Lab at Georgia Tech, leads us into a huge green space next to the church. The two-block community garden is leased out by Wheat Street Baptist, another nearby church.

"The impetus for this was to have local food production, as we see in a lot of communities," Stone says. "But the centralization of this, literally less than a mile from downtown Atlanta, is unique."

And it's not simply a garden. It's a summer camp at the moment, and an urban farm brimming with okra, onions, tomatoes and arugula, among other vegetables.

It's an island of calm that actually helps offset some of the heat that builds up so dramatically in the concrete all around us. That's not to say it's actually cool on a midsummer day.

"You know, it feels good here," says Amakiasu Ford-Howze, who works at the garden. "People come here and they go, 'Ah,' because you do see green, and you see flowers. We have a lot of flowers. So it just feels good here. It helps."

Stone says it actually accomplishes much more than meets the eye. Open, vegetated space like this helps water evaporate throughout the day. And evaporating water carries away heat. Like sweat, it's nature's air conditioning, but we've managed to interrupt that process in cities. The result is called the urban heat island effect, and it's adding to our warming woes.

"In addition to having increasing concentrations of greenhouse gases globally, which are driving warming at the global scale, at the scale of cities, we have changes in land use that are also contributing to rising temperatures," Stone says.

The Problem Is Now

Cutting down trees is a big factor. Pavement also stores heat during the day and makes cities hotter at night. And as cities heat up, air conditioners run harder. Their exhaust heat also pushes up the temperature. It all adds up — a lot — according to Stone's research on American cities.

"Not only are most cities heating up more rapidly than the planet, they tend to be heating up at double the rate," he says. (This is detailed in his book, The City and the Coming Climate.)

And if this trend continues, if the planet heats up 4 degrees in the coming decades, cities will heat up a blistering 8 degrees. 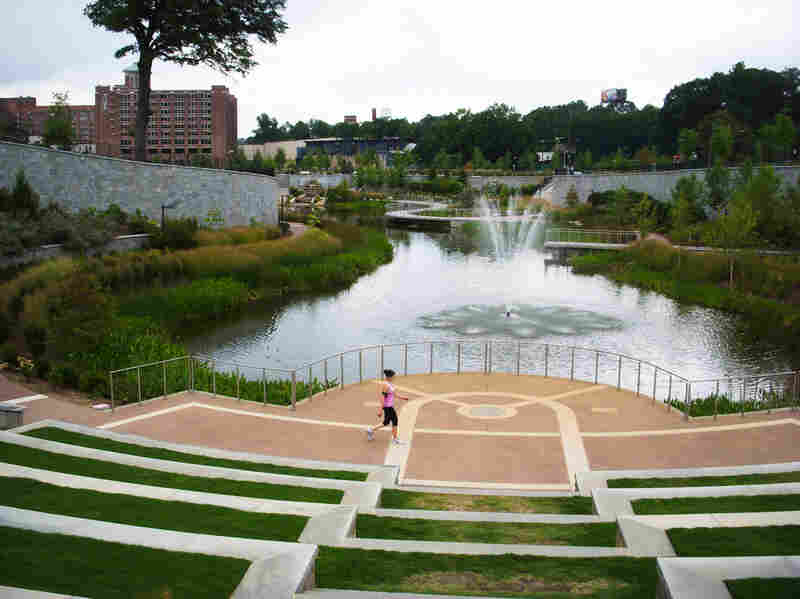 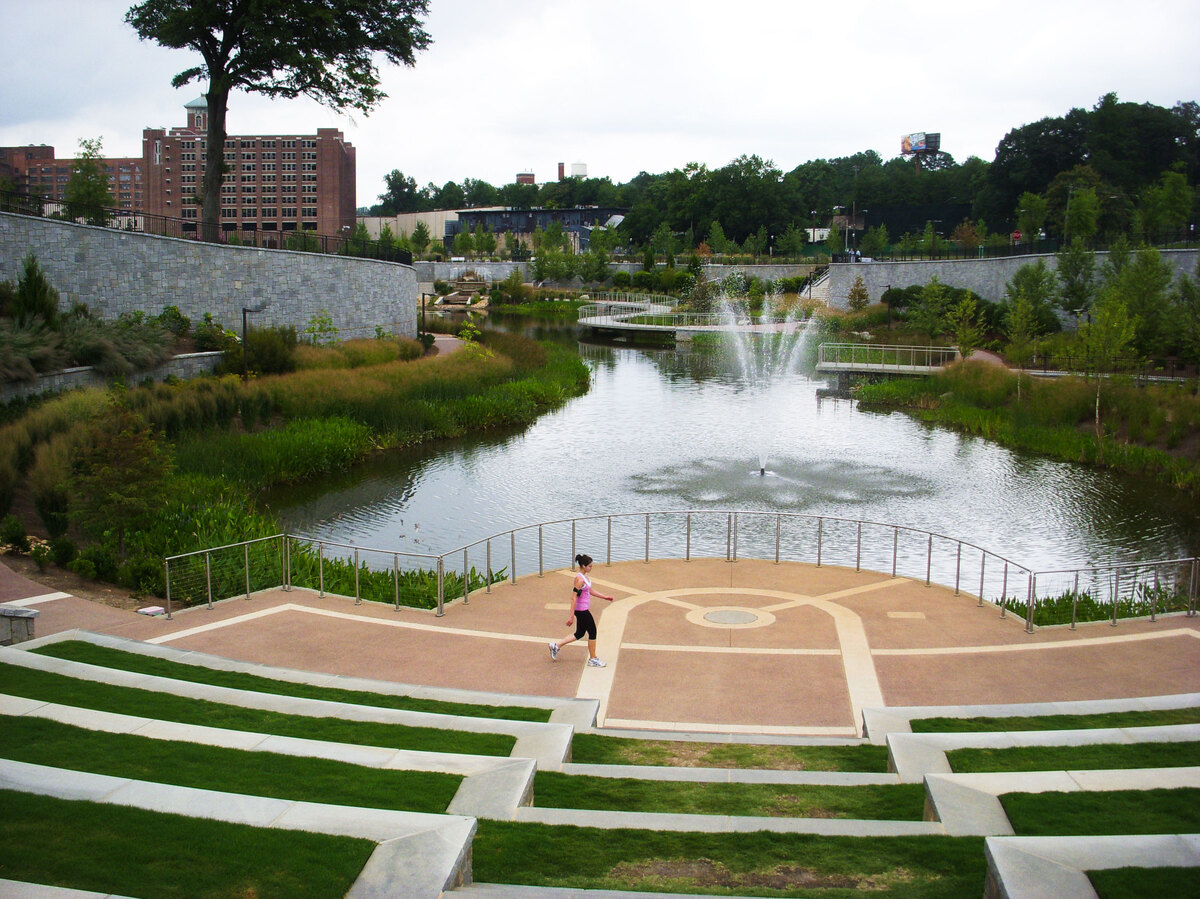 "That raises some significant public health issues, significant infrastructure issues," he says. Extreme heat is potentially deadly to vulnerable populations. And it can cause infrastructure headaches ranging from power outages to warped rail tracks.

But he isn't all gloom and doom, because there are ways to ease this. His own lifestyle is at the extreme end of what you can do: He has solar panels on his roof, and he commutes on an electric scooter, which he charges off his solar cells.

His car is powered by biodiesel, and he drives with the windows down. It doesn't have air conditioning, which is especially noticeable when we pull up next to an accelerating bus — a blast of hot air comes into the car.

Stone says about 80 percent of the fuel that vehicles burn simply turns to heat. And that turns out to be another important element of the urban heat island effect.

What Cities Can Do

But Atlanta residents don't have to be as dedicated as Brian Stone to make a difference. We pull up to a beautiful new park behind one of the city's defining avenues, Ponce de Leon.

Stone walks past grassy areas toward a large pond with a fountain in the middle — a far cry from Ponce de Leon's fabled fountain of youth, but still beneficial.

"This is a good example of what cities should be doing to deal with climate at the urban scale," he says. "Not just thinking about energy efficiency, which we need to think about, but we need to be bringing in this green space and even more surface amenities like this pond here, within the city itself, which will directly contribute to cooling benefits for the neighborhood."

Water evaporates from the pond and cools the area. But that's not why the city built it. It's part flood control, part neighborhood beautification, part recreation site. But Stone says if you just plan with a little care, those sorts of amenities can also counteract urban warming.

Trees can help more than anything else, both by providing shade and by evaporating water through their leaves. But Stone has no illusions that this will be a simple task.

"We will need to plant millions of trees around Atlanta to measurably reduce temperatures around the city, and that's a tremendous challenge," he says. "But what's advantageous is that's fully within the control of the city itself."

You don't need an international agreement on climate change — or even consensus that humans are causing climate change. And if you can reduce urban heat, you can reduce demand for air conditioning, which in turn lowers energy demand and greenhouse gas emissions. So cities can help themselves and the globe at the same time.

Tackling this problem requires some creativity.

Across town in a 58-acre swatch of urban forest, the challenge isn't simply to plant trees, but to preserve the ones that are already here. This is where a flock of sheep and goats comes in. 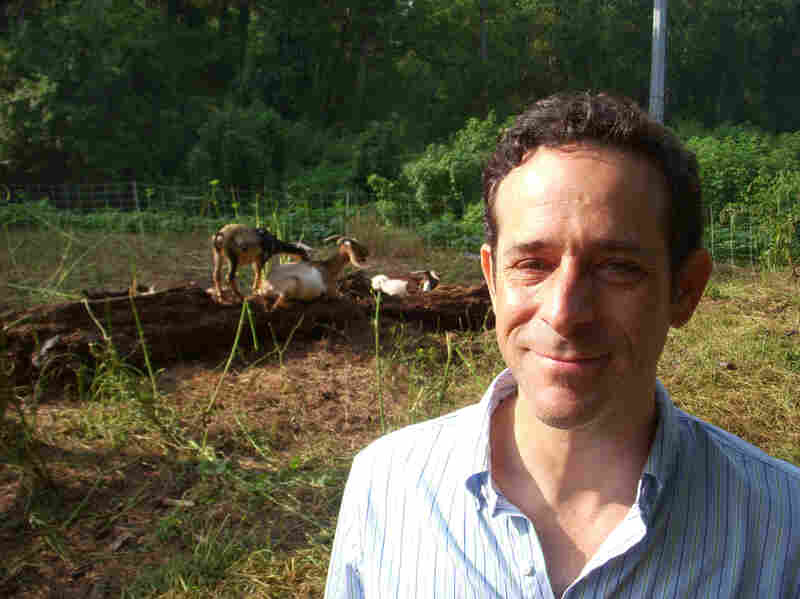 Greg Levine, with the nonprofit Trees Atlanta, is working to plant new trees and saplings in the area. Richard Harris/NPR hide caption 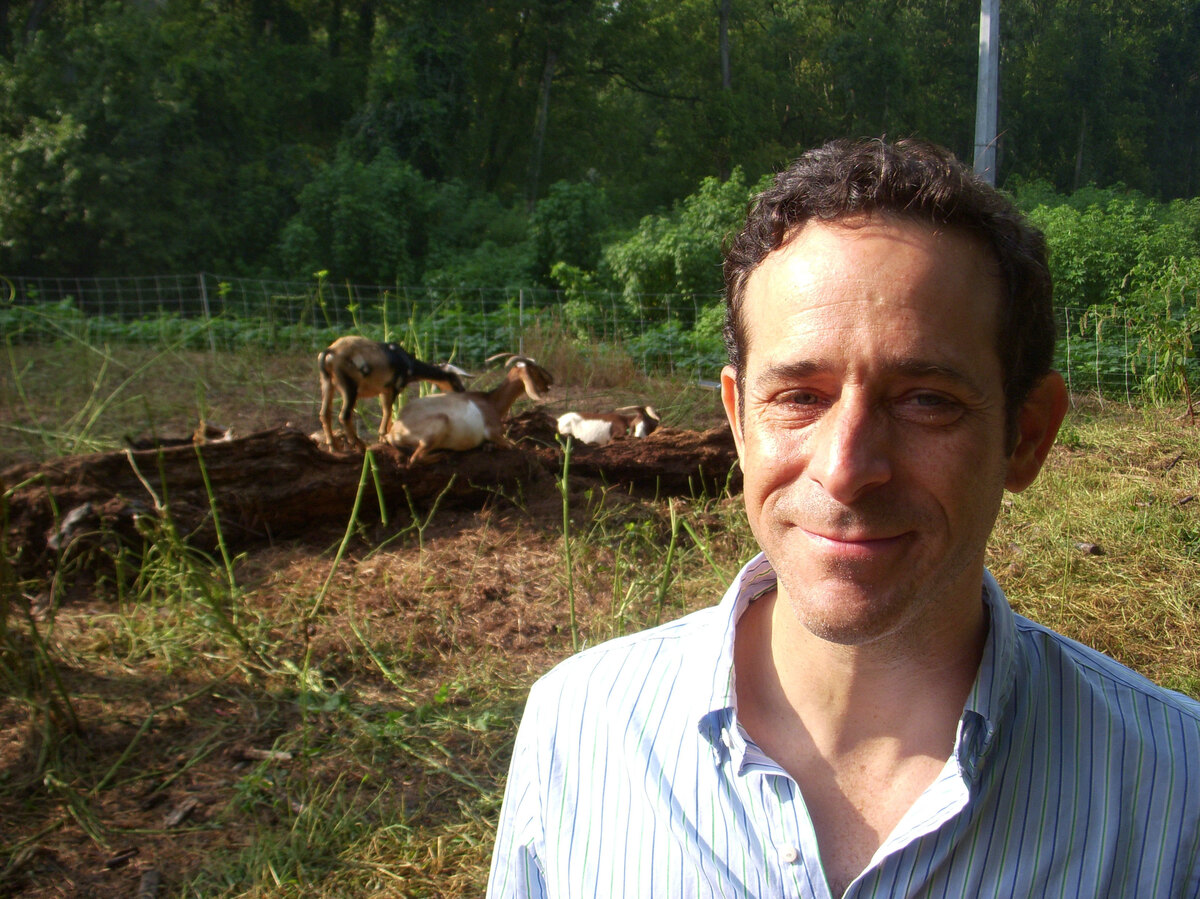 Greg Levine, with the nonprofit Trees Atlanta, is working to plant new trees and saplings in the area.

"The sheep out here are eating kudzu right now; of course, kudzu is the most invasive plant in the Southeast," says Greg Levine, with a nonprofit called Trees Atlanta.

Kudzu vines can climb trees and kill them. So his organization has hired an urban shepherd to fight back. It's an uphill battle not only against kudzu, but with developers who, in boom times, chopped down 50 acres of trees a day around Atlanta, according to the U.S. Forest Service.

"We're one of the most forested states in the country," Levine says. "We have beautiful forests. But we're also known for having the most tree removal in the country, as well."

A thick canopy of trees can easily drop air temperature by 20 or 30 degrees, compared with a paved parking lot, Levine says. His small organization can manage to plant 3,000 trees and 3,000 saplings a year. That's far short of the millions that urban planner Brian Stone says the city could ultimately use, but it's a start.

Neighbors wander down to see the sheep and goats, which are guarded by dogs and corralled by a portable electric fence — turned off at the moment.

Levine grabs a doughnut that they've laid out for the gathering and tries a gentle fundraising pitch.

"Sheep are adoptable, everybody," he announces. "Pick out a sheep. Donations for Trees Atlanta!"

Here, in the humid grips of a midsummer Atlanta day, the expression "think global, act local" doesn't seem quite so worn.

A previous Web version of this story, as does the audio, incorrectly said that Ebenezer Baptist Church leases out space for a community garden. While the land is adjacent to Ebenezer, it is actually leased out by Wheat Street Baptist Church.