Accessibility links
Bridging The Gap Between Two Neighborhoods In the nation's capital, park planners have drawn up an ambitious plan to transform an old bridge into an active recreation space. If realized, the park would offer a physical and symbolic link between two very different communities. 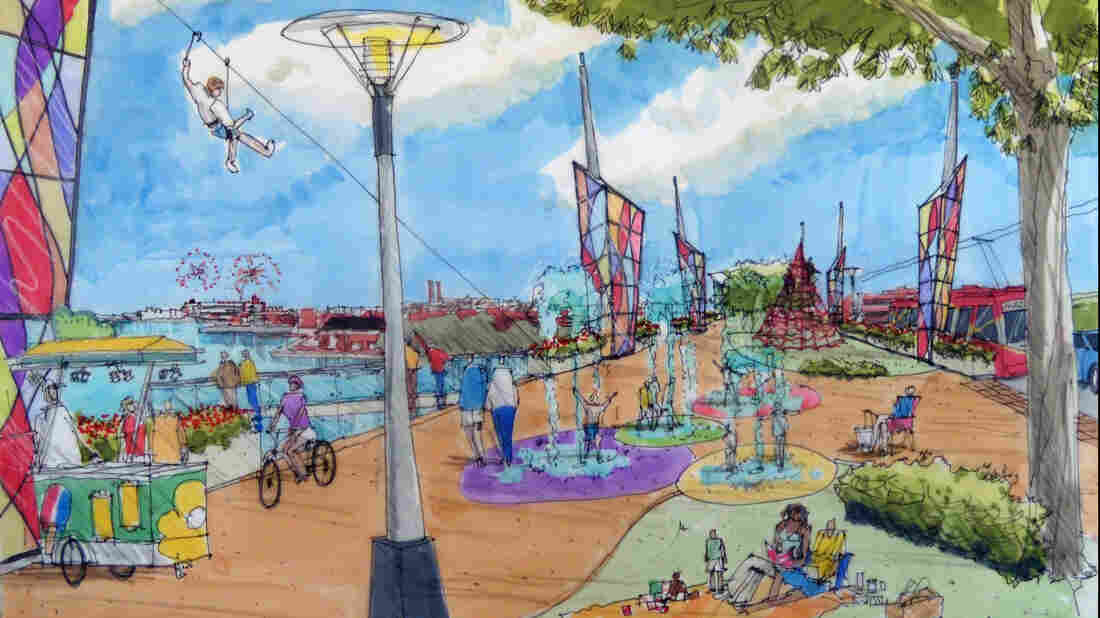 An illustration for a park proposed for Washington's old 11th Street Bridge. If realized, the park would span the Anacostia River, linking the Capitol Hill neighborhood with lower-income Anacostia. Ed Estes/Courtesy of D.C. Office of Planning hide caption

Cities around the nation have tried a variety of approaches to revitalizing their urban cores. Some have turned to repurposing old infrastructure to breathe new life into neighborhoods.

One such effort is under way in the nation's capital, where the redevelopment of a bridge linking a wealthy part of the city with a lower-income one may present an opportunity — if an ambitious park plan can be brought to fruition.

The city's 11th Street Bridge, in southeastern Washington, carries interstate and local traffic over the Anacostia River. The Washington Navy Yard and Capitol Hill lie on one side of the bridge, and the neighborhood known as Anacostia, and much of Southeast D.C., lie on the other.

The city is in the midst of a massive bridge replacement, creating a brand new span to handle the daily traffic. The adjacent old span is being dismantled and was slated to be torn down. 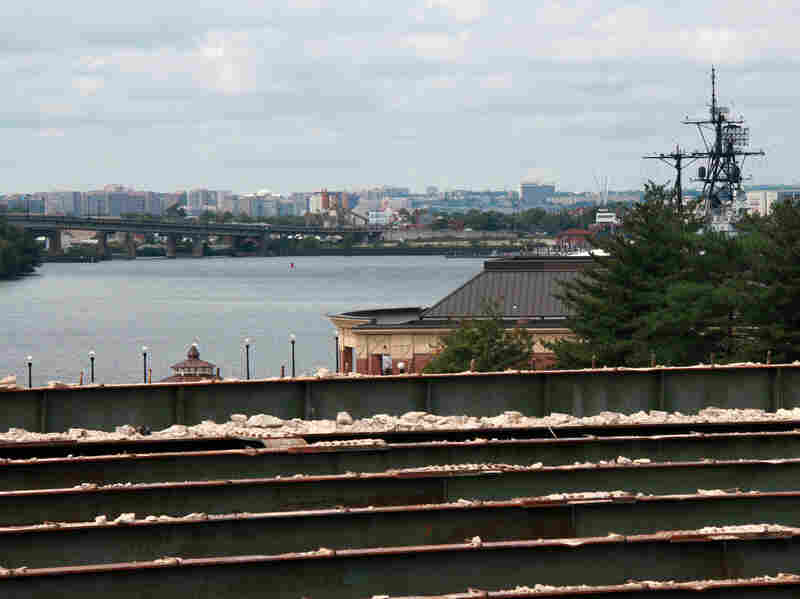 The concrete atop the old bridge has been stripped off. The proposed park would offer impressive views. Franklyn Cater/NPR hide caption 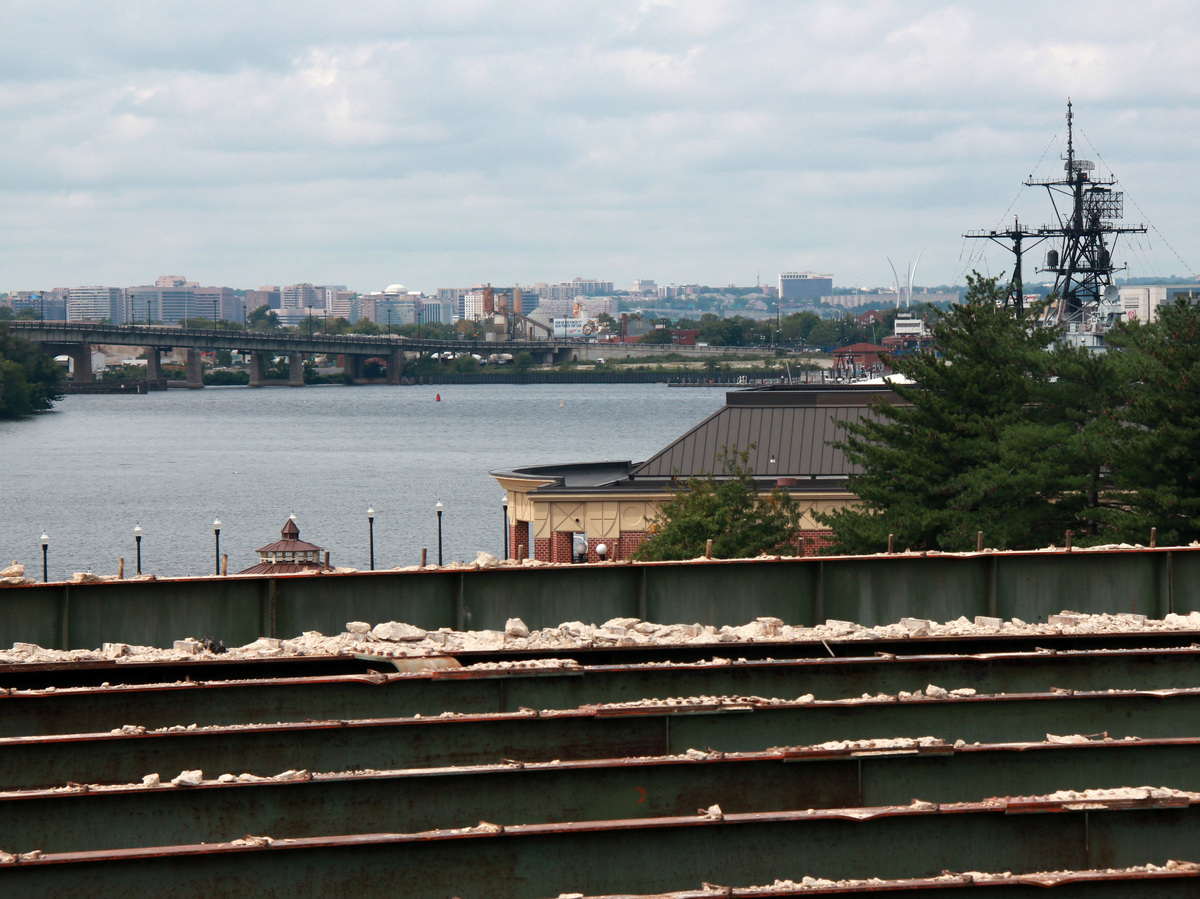 The concrete atop the old bridge has been stripped off. The proposed park would offer impressive views.

But now, there's a fledgling effort to turn the old bridge into a park across the water. Instead of carrying 18-wheelers, the repurposed old span would carry pedestrians.

"What we're proposing to do is to transform this old freeway into a place of active recreation," says Scott Kratz, vice president for education at the National Building Museum and a volunteer adviser for the proposed project.

Kratz envisions the bridge becoming a public space full of activity over the water. It would connect waterfront parks on either side, while also linking a wealthier area of the city with a poorer one.

Kratz has been collecting other ideas from residents, too: a skate park; a climbing wall; a farmers market; an orchard of fruit trees; and a harvest festival.

The park proposal began in the city's planning office. And while Kratz is only a volunteer, he's asking for suggestions for the bridge every chance he gets. He's been holding design workshops with students and going to community meetings and coffees, all with the aim of drumming up support — and millions in private funding.

"I will meet with anybody, anywhere, to hear their ideas about the 11th Street Bridge project," Kratz says.

A Plan To Bridge Two Communities

The Anacostia River, which runs through the Maryland suburbs and Washington, D.C., into the Potomac River, has long been a dividing line in the capital, physically, economically and racially. The neighborhood on the eastern side is more than 90 percent black and is relatively low-income in comparison with the western side.

So a park on this bridge could serve not just as a marquee attraction in the nation's capital but as an important symbol, as well.

Showing off renderings of the proposed project from the D.C. Office of Planning, Kratz gets into the project's core goals and some real complexities: bridging two communities and spawning new development. 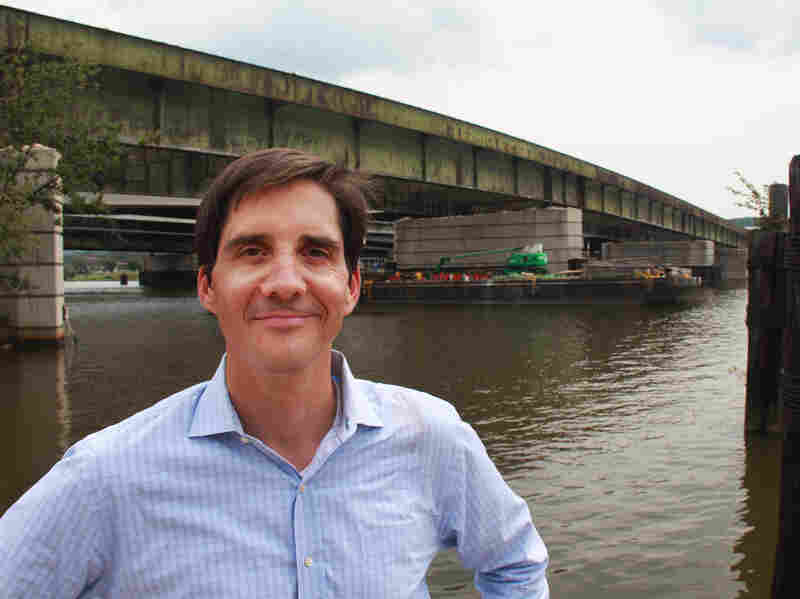 Scott Kratz, a volunteer adviser for the park proposal, stands in front of the old 11th Street Bridge. He's optimistic that advocates can raise the funds needed to complete the project. Franklyn Cater /NPR hide caption 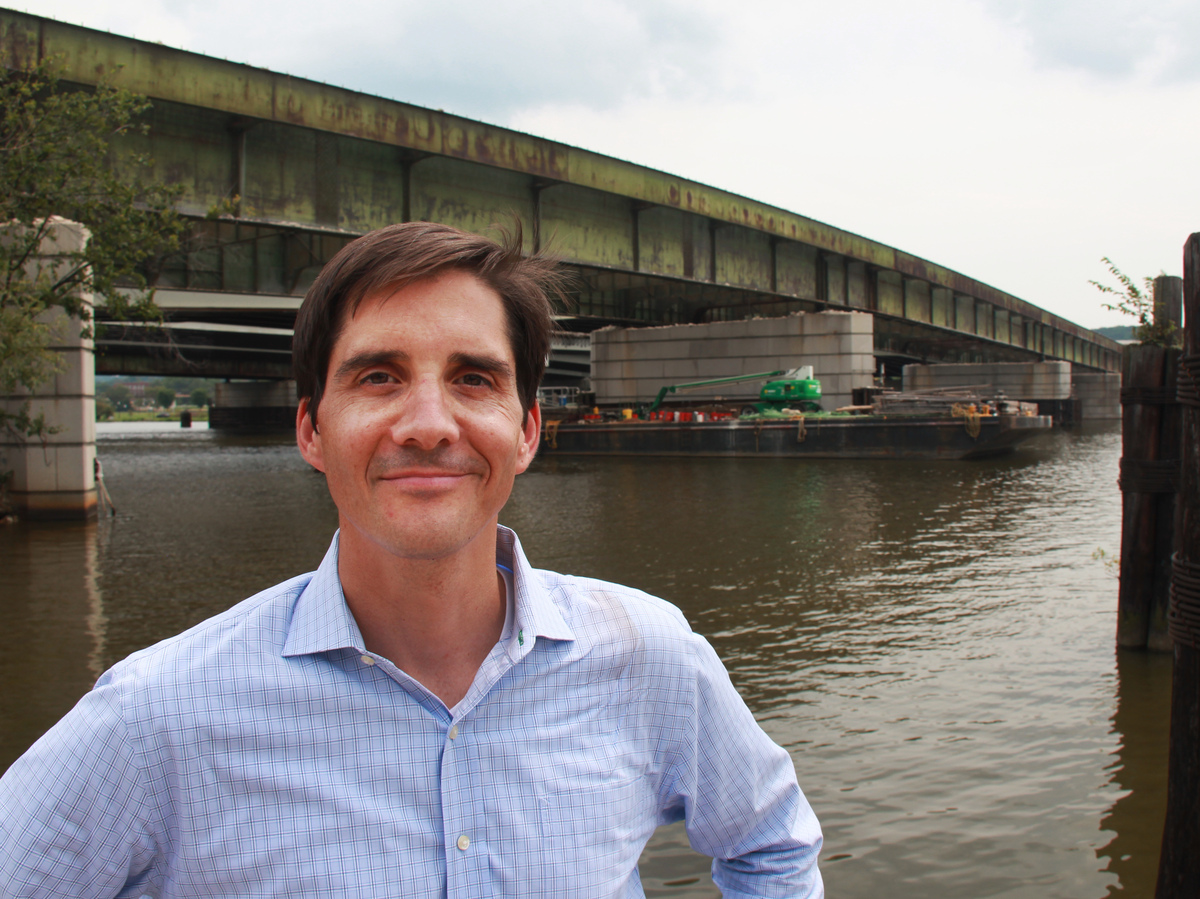 Scott Kratz, a volunteer adviser for the park proposal, stands in front of the old 11th Street Bridge. He's optimistic that advocates can raise the funds needed to complete the project.

In the plans, the windows of one empty storefront are spruced up with a mural — and information about the possible park.

Resident Tamara Wormley and her children seem to like the idea. "It'd give more kids a chance to get out [and do] something different," Wormley says. "They don't have to be vandalizing a lot of things around here."

Ron Beidleman, who lives nearby, is more skeptical of the park project.

"I'll wait till I see it happen. You know, see how it turn out," he says. "The pictures are fine, yeah, it beats graffiti. But if it's gonna bring up the property values around here, I got a problem with that."

A lot of people in the neighborhood can't afford $500,000 homes, Beidleman says. "If that's gonna force people out of their homes, I don't think it's a good idea."

Oramenta Newsome, who works on development and affordable housing issues with the Local Initiatives Support Corp., says the completed bridge and corresponding redevelopment will have an effect on the people who live nearby.

"Work on this bridge will definitely increase the value of the adjacent neighborhoods to it," Newsome says. "That's a good thing, as long as we provide for balance."

Newsome calls the east side of the river the "last frontier." Gentrification is only just starting to happen here. To keep a mix of incomes in the neighborhood, Newsome says, the city needs the right mindset about how the bridge fits with other development plans.

The goal — and the challenge — she says, is to create a neighborhood that both clerk typists and lawyers can afford to live in.

Then there's the design. Newsome says finding the right balance of activities on the bridge requires community awareness, too. Climbing walls and skate parks might encourage healthy activity, she says, but some people also want passive recreation.

And then there's the money: $25 to $35 million to realize the redevelopment plan.

"There isn't a park in the history of the world where the money was sitting there waiting before the idea was fleshed out and created," says Peter Harnik, who works on Capitol Hill, where he runs the national Center for City Park Excellence at the Trust for Public Land.

Parks Vie For Space In Miami's Forest Of Condos

Harnik says the 11th Street Bridge has the potential to be really innovative and different. And to get it right, community input, design and money are all intertwined.

"In every case, the idea has to develop a momentum and an excitement that generates the money," Harnik says. "Just having a continuing community dialogue is the way to go about doing that."

Back up on the 11th Street Bridge, Kratz says the city will use ideas from community meetings to create a nationwide design competition. Planners will take a few designs back to the community and go from there.

And as for fundraising?

"We're looking at having this really be a partnership with the city of Washington, D.C., but have the bulk of both funds and maintenance be from private dollars," says Kratz, "whether those be foundations, corporations or individuals."

Kratz says he has yet to receive a check for the project, but that he's "had very promising conversations with people." He's looking for a nonprofit organization to take charge of the money, and he has plenty of selling points: a bridge full of activities that could improve public health. Connecting disparate communities. Sparking new development.

"I can't think of a project in Washington, D.C., that accomplishes so many different goals," Kratz says. "And I think funders hear that."

There are hurdles to this ambitious idea, but politically, it seems poised to happen. The D.C. mayor, the city's planning office and the neighborhood commissioners all support it — at least in theory.

All of which leaves Kratz optimistic. He wants to open a park over the Anacostia River in 2016.

The audio of this story, as did a previous Web version, incorrectly says that Peter Harnik lives on Capitol Hill. Harnik actually lives in Virginia, although he works on the Hill.