Accessibility links
The Strange Story Of The Man Behind 'Strange Fruit' One of Billie Holiday's most iconic songs is "Strange Fruit," a haunting protest against the inhumanity of racism. Many people know that the man who wrote the song was inspired by a photograph of a lynching. But they might not realize that he's also tied to an iconic event in America's history. 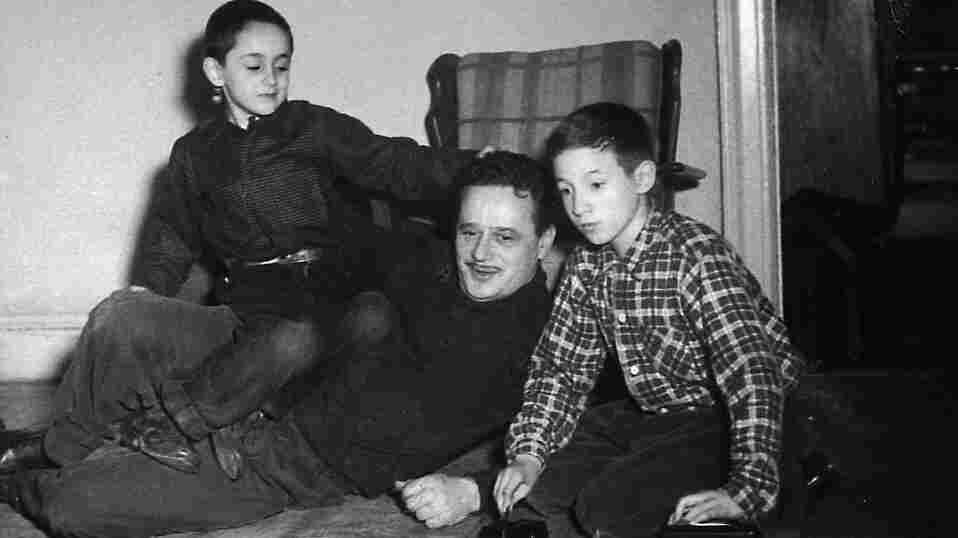 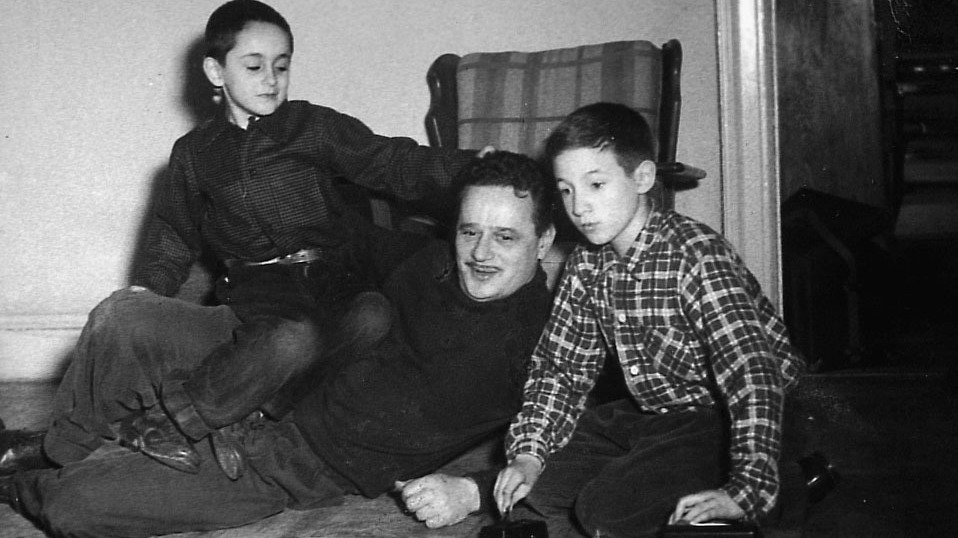 Abel Meeropol watches as his sons, Robert and Michael, play with a train set.

Courtesy of Robert and Michael Meeropol

One of Billie Holiday's most iconic songs is "Strange Fruit," a haunting protest against the inhumanity of racism. Many people know that the man who wrote the song was inspired by a photograph of a lynching. But they might not realize that he's also tied to another watershed moment in America's history.

The man behind "Strange Fruit" is New York City's Abel Meeropol, and he really has two stories. They both begin at Dewitt Clinton High School, a public high school in the Bronx that has an astonishing number of famous people in its alumni. James Baldwin went there. So did Countee Cullen, Richard Rodgers, Burt Lancaster, Stan Lee, Neil Simon, Richard Avedon and Ralph Lauren.

Meeropol graduated from Dewitt Clinton in 1921; he went on to teach English there for 17 years. He was also a poet and a social activist, says Gerard Pelisson, who wrote a book about the school.

In the late 1930s, Pellison says, Meeropol "was very disturbed at the continuation of racism in America, and seeing a photograph of a lynching sort of put him over the edge."

Meeropol once said the photograph "haunted" him "for days." So he wrote a poem about it, which was then printed in a teachers union publication. An amateur composer, Meeropol also set his words to music. He played it for a New York club owner — who ultimately gave it to Billie Holiday.

When Holiday decided to sing "Strange Fruit," the song reached millions of people. While the lyrics never mention lynching, the metaphor is painfully clear:

Southern trees bear a strange fruit,
Blood on the leaves and blood at the root,
Black body swinging in the Southern breeze,
Strange fruit hanging from the poplar trees.

Pastoral scene of the gallant South,
The bulging eyes and the twisted mouth,
Scent of magnolia sweet and fresh,
And the sudden smell of burning flesh!

Here is a fruit for the crows to pluck,
For the rain to gather, for the wind to suck,
For the sun to rot, for a tree to drop,
Here is a strange and bitter crop.

In 1999, Time magazine named "Strange Fruit" the "song of the century." The Library of Congress put it in the National Recording Registry. It's been recorded dozens of times. Herbie Hancock and Marcus Miller did an instrumental version, with Miller evoking the poem on his mournful bass clarinet.

Miller says he was surprised to learn the song was written by a white Jewish guy from the Bronx. "Strange Fruit," he says, took extraordinary courage both for Meeropol to write and for Holiday to sing.

"The '60s hadn't happened yet," he says. "Things like that weren't talked about. They certainly weren't sung about."

New York lawmakers didn't like "Strange Fruit." In 1940, Meeropol was called to testify before a committee investigating communism in public schools. They wanted to know whether the American Communist Party had paid him to write the song. They had not — but, like many New York teachers in his day, Meeropol was a Communist.

Journalist David Margolick, who wrote Strange Fruit: The Biography of a Song, says, "There are a million reasons to disparage communism now. But American Communism, one point it had in its favor was that it was concerned about civil rights very early."

Meeropol left his teaching job at Dewitt Clinton in 1945. He eventually quit the Communist Party.

And that's where the second part of Meeropol's story begins. The link is the pseudonym he used when writing poetry and music: Lewis Allan.

"Abel Meeropol's pen name 'Lewis Allan' were the names of their children who were stillborn, who never lived," says his son, Robert Meeropol. He and his older brother, Michael, were raised by Abel and his wife, Anne Meeropol, after the boys' parents — Ethel and Julius Rosenberg — were executed for espionage in 1953.

Julius and Ethel Rosenberg were sentenced to death for conspiring to give atomic secrets to the Soviet Union. The Rosenbergs had also been Communists. 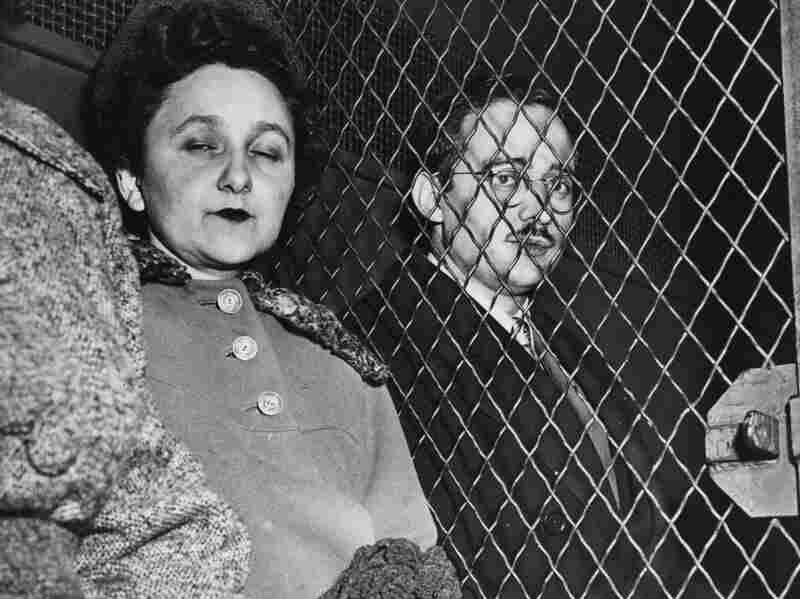 Julius and Ethel Rosenberg are taken to prison after being found guilty of nuclear espionage. They were subsequently executed. Keystone/Getty Images hide caption 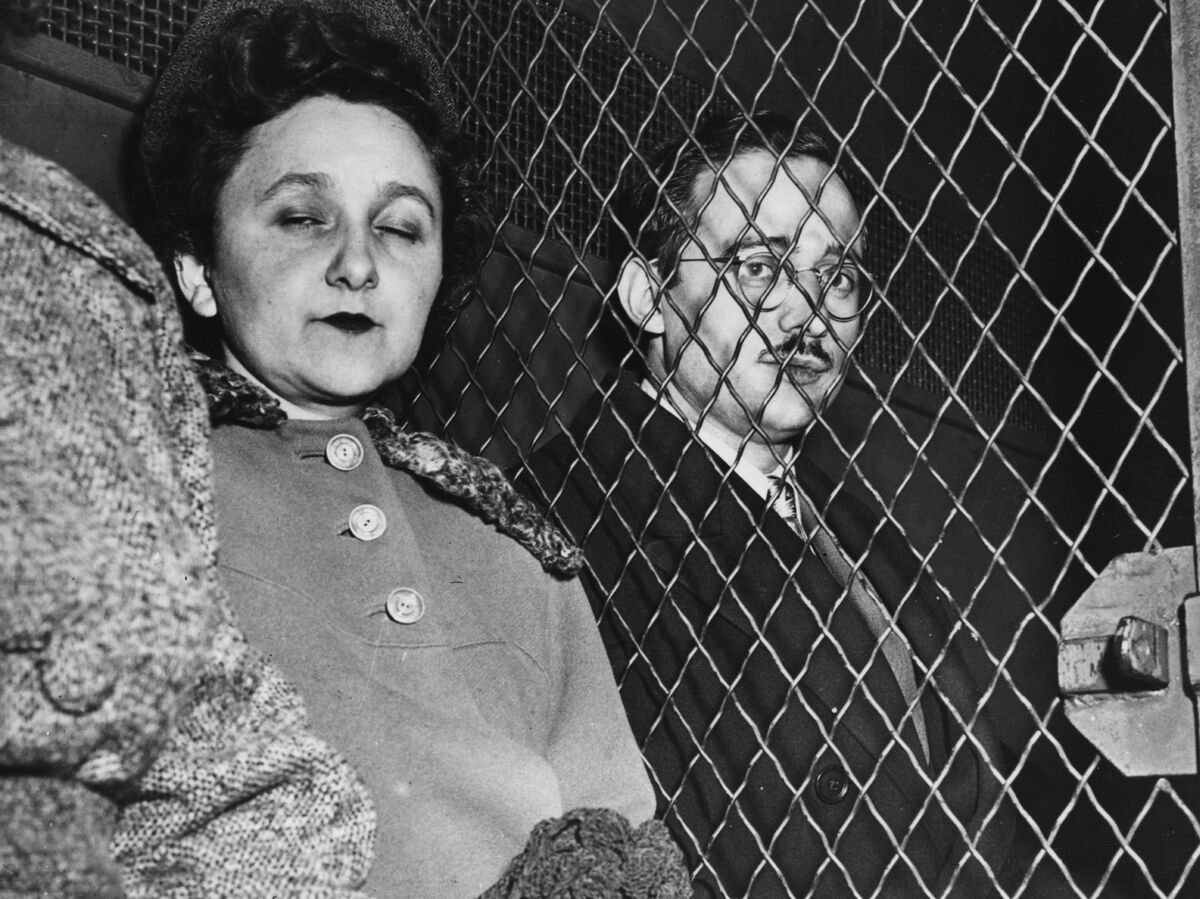 Julius and Ethel Rosenberg are taken to prison after being found guilty of nuclear espionage. They were subsequently executed.

The couple's trial and execution made national headlines, and there was also something of a salacious element, given that the Rosenbergs were a married couple. News accounts described it as "the first husband and wife to die in the electric chair."

At the time, the Rosenberg sons, Robert and Michael, were 6 and 10, respectively. News photographs of the boys show them dressed in suits visiting their parents in prison.

"They're these little boys and they're wearing these caps, and they look so young and so vulnerable. It's really a very poignant image," says Margolick.

Robert Meeropol says that in the months following his parents' execution, it was unclear who would take care of him and his brother. It was the height of McCarthyism. Even family members were fearful of being in any way associated with the Rosenbergs or Communism.

Then, at a Christmas party at the home of W.E.B. Du Bois, the boys were introduced to Abel and Anne Meeropol. A few weeks later, they were living with them.

"One of the most remarkable things was how quickly we adapted," Robert says. "First of all, Abel, what I remember about him as a 6-year-old was that he was a real jokester. He liked to tell silly jokes and play word games, and he would put on these comedy shows that would leave me rolling."

There is something else about Abel Meeropol that seems to connect the man who wrote "Strange Fruit" to the man who created a loving family out of a national scandal. "He was incredibly softhearted," Robert says. 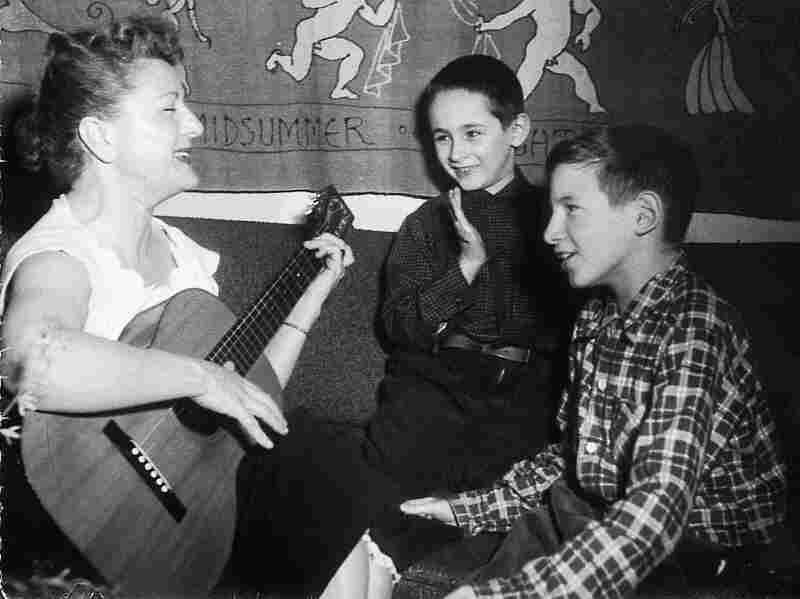 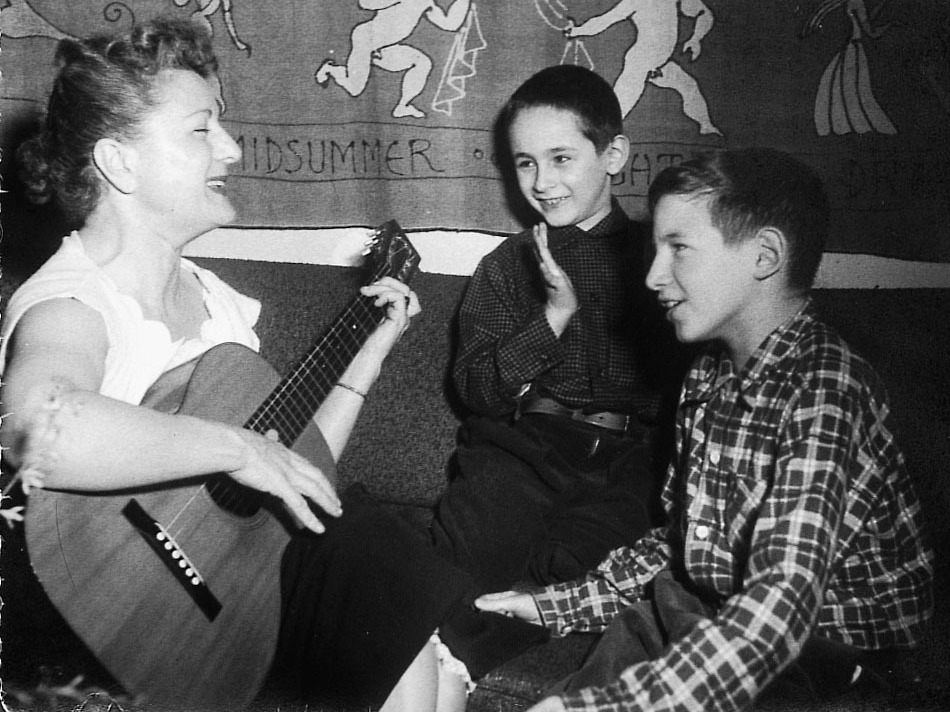 Anne Meeropol plays a song on guitar for her sons, Robert and Michael.

Courtesy of Robert and Michael Meeropol

For example, there was an old Japanese maple tree in their backyard, which sent out many new seedlings every year.

"I was the official lawnmower," Robert says, "and I was going to mow over them, and he said, 'Oh, no, you can't kill the seedlings!' I said, 'What are you going to do with them, Dad? There are dozens of them.'

"Well, he dug them up and put them in coffee cans and lined them up along the side of the house. And there were hundreds of them. But he couldn't bring himself to just kill them. It was just something he couldn't do."

Abel Meeropol died in 1986. His sons, Robert and Michael, both became college professors. They're also both involved in social issues. Robert founded the Rosenberg Fund for Children. And he says that even after all these years, he still finds himself unable to kill things in his own garden.