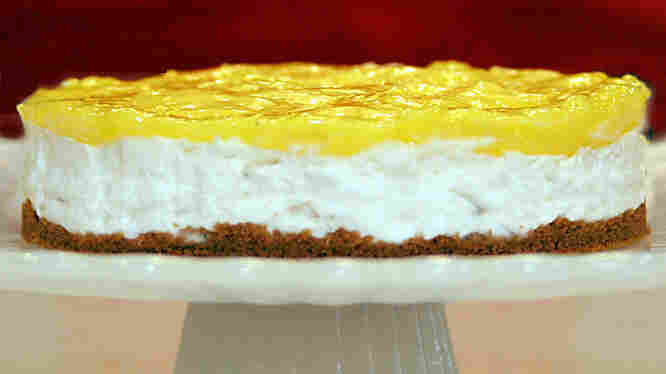 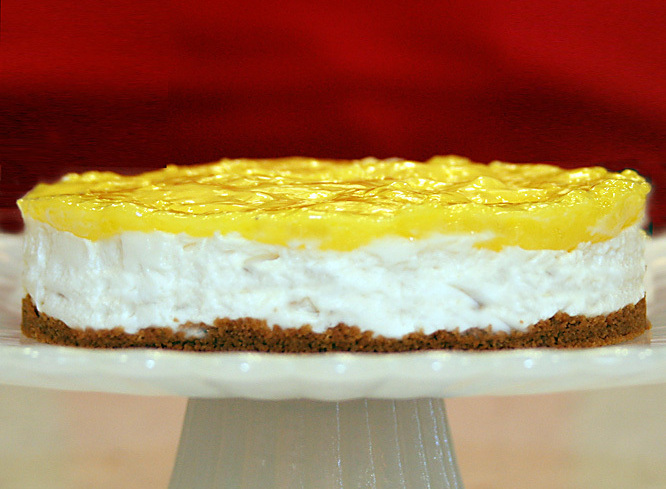 I was once known among my friends as the queen of desserts. OK, maybe that's an exaggeration, but I was at least the bringer of desserts. My circle of friends hosted frequent dinner parties, but my tiny apartment made entertaining any more than a couple of guests impossible. To make up for that, I always offered to bring a contribution. While I preferred appetizers, the day came when a friend asked for a dessert. With some trepidation, I complied. I have no idea what that first dessert was, but it was a hit. My fate was sealed.

I started out easy — parfaits that required nothing but store-bought cookie crumbs, fruit and cream, or pies that consisted of softened ice cream spooned into a crumb crust. With practice, though, I moved on to more complicated desserts.

None of my friends seemed to notice that I rarely baked any of the desserts I provided. Despite years of attempts, I was never confident in my baking skills. Runny cheesecakes, exploding pastry crusts and fallen cakes made me oven-shy, so I concentrated on sweet treats that didn't require long bouts of baking time.

I'm not sure how I came by my baking aversion. My mother, while she didn't bake many cakes, baked a wide assortment of cookies and made great pies. What I remember best from childhood, though, are the desserts that required no or very little baking — parfaits and ice cream pies, "no-bake" cheesecake and berry fools.

Janet A. Zimmerman is an award-winning food writer and cooking class instructor based in Atlanta. Her work has twice been featured in the anthology Best Food Writing (2008 and 2010), and her one and only piece of fiction was printed in the anthology Literary Lunch. In 2010, she received the International Association of Culinary Professionals' Bert Greene Journalism Award. She is a senior manager for the Society for Culinary Arts & Letters, a nonprofit organization dedicated to culinary education.

Cooking for my father, who liked to end dinner with a sweet, my mother no doubt appreciated simplicity. And I'm sure that during the hot Utah summers, it was a relief to be able to create a beautiful dessert without enduring the hours of extra oven heat necessary to bake a traditional pie or cake.

Whether it was her influence or my own uneven baking attempts, I became a fan of what I knew as "icebox" desserts — those that required no (or virtually no) baking. I started out easy — parfaits that required nothing but store-bought cookie crumbs, fruit and cream, or pies that consisted of softened ice cream spooned into a crumb crust. With practice, though, I moved on to more complicated desserts.

One of the first recipes I copied from Mom's file box was for chocolate velvet cream pie, a smooth, rich concoction that turned into my signature dessert for several years. When I discovered how to make lemon curd, I branched out and turned to no-bake "cheesecake" and lemon mousse. My parfaits evolved into complex layers of nuts, custard and flavored whipped cream.

What never occurred to me was that while I was so studiously avoiding the oven, I was learning dessert techniques that were just as difficult as the baking I refused to do. Custards and curds, mousses, meringues and candied nuts — none of them intimidated me the way "baking" did. My oven-averse approach to desserts turned out to be a surprising education.

It was probably inevitable that I slowly overcame my fear of baking. It started out innocently enough: I discovered that the crumb crusts I made for my icebox pies came out much better if I baked them for 5 minutes or so, and that toasting nuts in the oven was much more predictable and even than doing them on the stove top. Then came the day I decided to bake my own shortbread crust for my "no-bake" cheesecake. I was free.

Through the years, I've capitalized on that freedom. I have learned how to bake — perhaps not brilliantly, but at least competently. I can turn out decent pastry crust and even bake an occasional cake. In summer, though, I still stay cool with these icebox desserts.

While you can omit the baking step in this recipe, a few minutes in the oven makes a more cohesive and sturdy crust than unbaked crumbs. The lemon curd can be made several days ahead and refrigerated, or frozen for up to a month and thawed for use in this recipe. 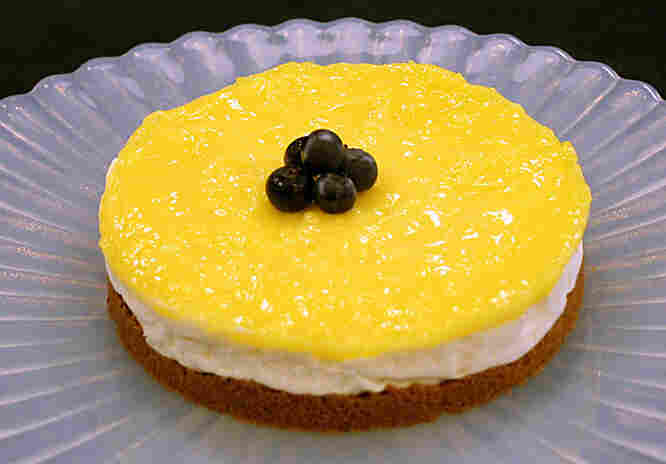 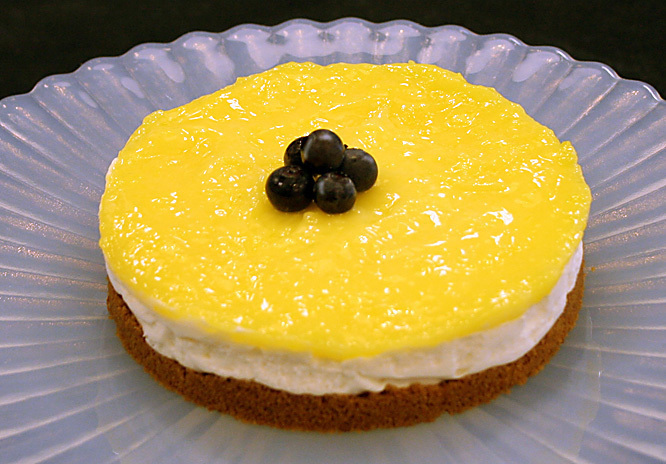 Optional but recommended: Preheat the oven to 325 degrees. Bake the crust for 5 minutes. Set aside to cool.

Place the cream cheese and vanilla in a large mixing bowl or the bowl of a stand mixer. Beat for several minutes until smooth. Add the powdered sugar and beat again until sugar is completely incorporated and mixture is smooth and light.

In a separate bowl, beat the cream until soft peaks form. Fold the whipped cream into the cream cheese mixture.*

Spoon the mixture into the crust and refrigerate while you make the lemon curd.

To make the curd, place a medium-mesh strainer over a medium-sized bowl and set aside.

Choose a small saucepan and a metal or heat-proof glass bowl that fits securely in the top of the pan. Put 1/2 to 1 inch of water into the saucepan (just enough that the water level doesn't quite touch the bottom of the bowl when it's set in the pan). Set the pan over high heat. Once it boils, turn the heat down to keep the water at a bare simmer.

Stir together the egg yolks and sugar in the bowl until well blended.

Place the bowl over the saucepan and stir in the lemon juice, lemon zest and salt. Cook over medium-low heat, stirring constantly, for a couple of minutes. Stir in the butter, 1 tablespoon at a time, and continue to cook until very thick, glossy and opaque. (You may find that you get a foamy white top layer that doesn't seem to want to blend in. I'm not sure why this happens, but you will need to cook the curd until it disappears, which it should do by the time the mixture is thickened.) When the curd is done, it will look like a very bright, thick Hollandaise sauce.

As soon as you reach this point, pour the sauce through the strainer. Press the mixture through with the back of a spoon, leaving the coagulated egg proteins and zest behind. Let cool for 15 to 20 minutes and then pour or spoon over the cream cheese mixture. Smooth the curd into an even layer. Place in freezer for 4 hours or refrigerator for 8 to 10 hours, or until cheesecake is very firm but not frozen.

While you can omit the baking step in this recipe, a few minutes in the oven makes a more cohesive and sturdy crust than unbaked crumbs. If you use a springform pan, use 4 1/2 ounces of cookies and 1/4 cup of butter for the crust, and press the crumbs into the bottom of the pan only (not up the sides). The raspberry sauce is optional but excellent with the rich chocolate dessert. 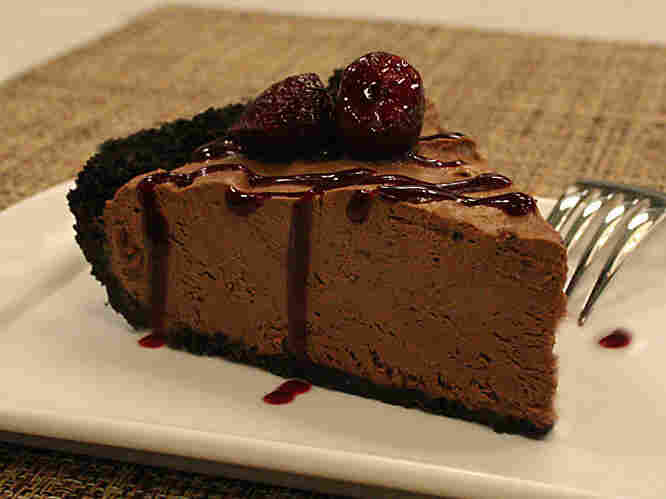 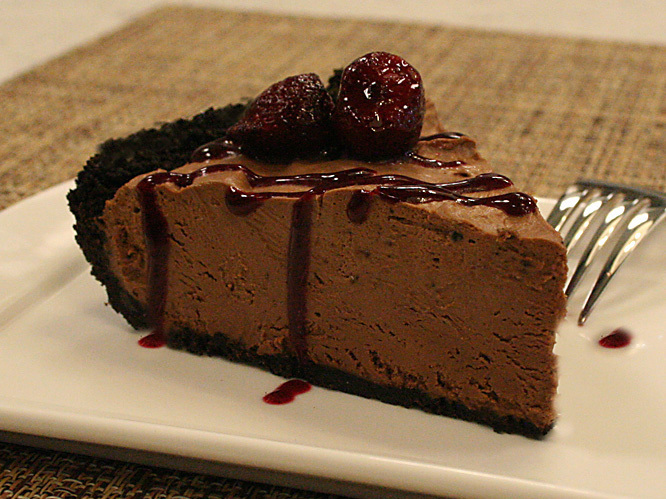 1/4 cup Chambord (or other raspberry liqueur)

Optional but recommended: Preheat the oven to 325 degrees. Bake the crust for 5 minutes. Set aside to cool.

Combine the cream cheese, 1/4 cup of sugar and the vanilla, beating until smooth. Beat in the egg yolks one at a time, then add the chocolate. Beat until very smooth.

Whip the cream to soft peaks. Fold the whipped cream into the chocolate mixture.*

Spoon the mixture over the crumb crust.

Place in the freezer for 4 to 8 hours, or until frozen completely.

For the raspberry sauce, place the berries, Chambord and sugar in a blender jar and blend until pureed. Place a fine mesh sieve over a bowl and pour the mixture through, pushing with a flexible spatula or the back of a large spoon. Set aside or refrigerate up to 2 days.

Remove pie from freezer and let sit for a few minutes. Slice with a warm knife (if the pie sticks to the knife, dip the knife into hot water between slices). Serve with raspberry sauce, if desired.

I based this dessert on a pie my mother used to make. Her version came from an advertisement and used pudding mix and whipped topping (although she substituted real whipped cream). The combination of sweet crunchy nuts and smooth custard is divine. You can also make this in a large trifle or other glass bowl instead of individual glasses. 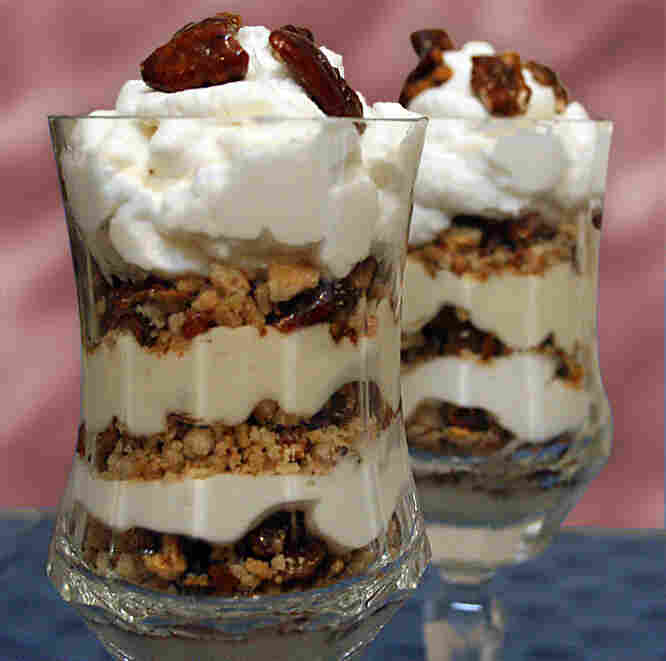 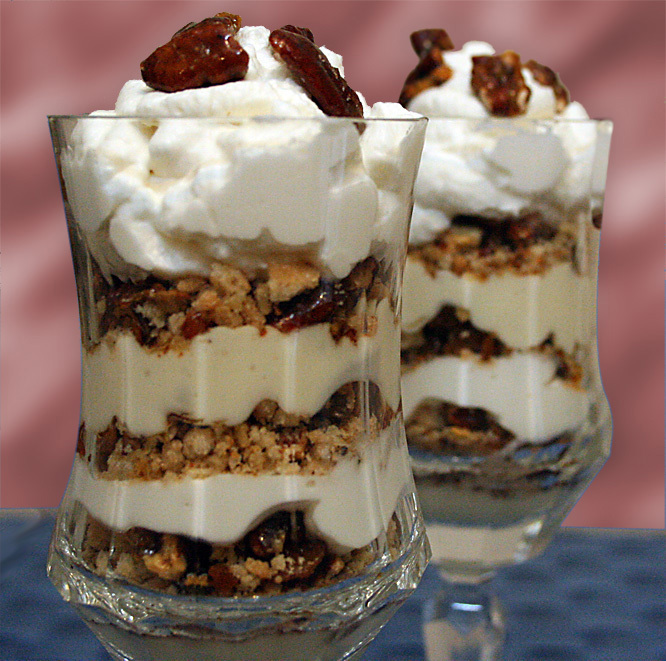 Makes 6 to 10 servings, depending on glass size

For the pralines, preheat oven to 325 degrees.

Line a sheet pan with a silicone liner, parchment paper or lightly buttered aluminum foil. Set aside. Have the butter and salt measured out and ready by the stove.

Spread the pecans on a sheet pan or other oven-proof pan and bake for 5 to 10 minutes, until fragrant and beginning to brown. Remove from oven but keep warm.

Heat a heavy medium-sized saucepan over medium-high heat until hot enough that water droplets bounce over the interior. Add the sugar to the hot pan and stir until sugar begins to melt.

Add the warm pecans, stirring constantly until the sugar melts completely and turns amber, being sure to coat the nuts evenly. Remove from heat and add the butter and salt, stirring until nuts are glossy.

Pour out onto the prepared sheet pan in a single layer. Let cool. When nuts are cool and crisp, break them apart as much as possible. If you like, set aside a few nice-looking pieces for garnish.

Pulse the rest of the nuts briefly in a food processor or place in a plastic bag and crush into smallish chunks (pea-sized at the largest).

Crush the cookies into coarse crumbs. Mix with the pecans.

For the custard, off heat, combine the cornstarch, sugar and salt in a medium saucepan and whisk until incorporated. While constantly whisking, slowly drizzle in 1/4 cup of the milk until smooth.

Whisk in the egg yolks one at a time. Stir in remaining milk and cream.

Place the saucepan over medium heat and cook, whisking often, until the custard begins to thicken and comes to a bare simmer, about 10 minutes. Reduce the heat to low and add the butter one piece at a time, stirring until butter is incorporated thoroughly. Stir constantly (you may want to switch to a silicone spatula or wooden spoon), scraping the bottom and sides of the pan. Cook 5 to 6 minutes, until the custard is thick enough to coat the spoon but is still pourable.

Remove from the heat and stir in the vanilla and bourbon.

Place a strainer over a small bowl and pour through the strainer. Press with the back of a spoon to push the custard through. Cover with a piece of plastic wrap and let cool for 15 to 20 minutes.

For the whipped cream, pour the cream into a medium bowl and whip on high until beginning to thicken. Add the powdered sugar and bourbon, and continue to whip until soft peaks form.