Accessibility links
For Some Black Voters, 2012 Is A Different Story In 2008, African-Americans turned out in record numbers to help elect America's first black president. Their support remains high, but their enthusiasm is not what it used to be. At the Democratic National Convention, African-Americans reflect on the last four years and why some are not as excited. 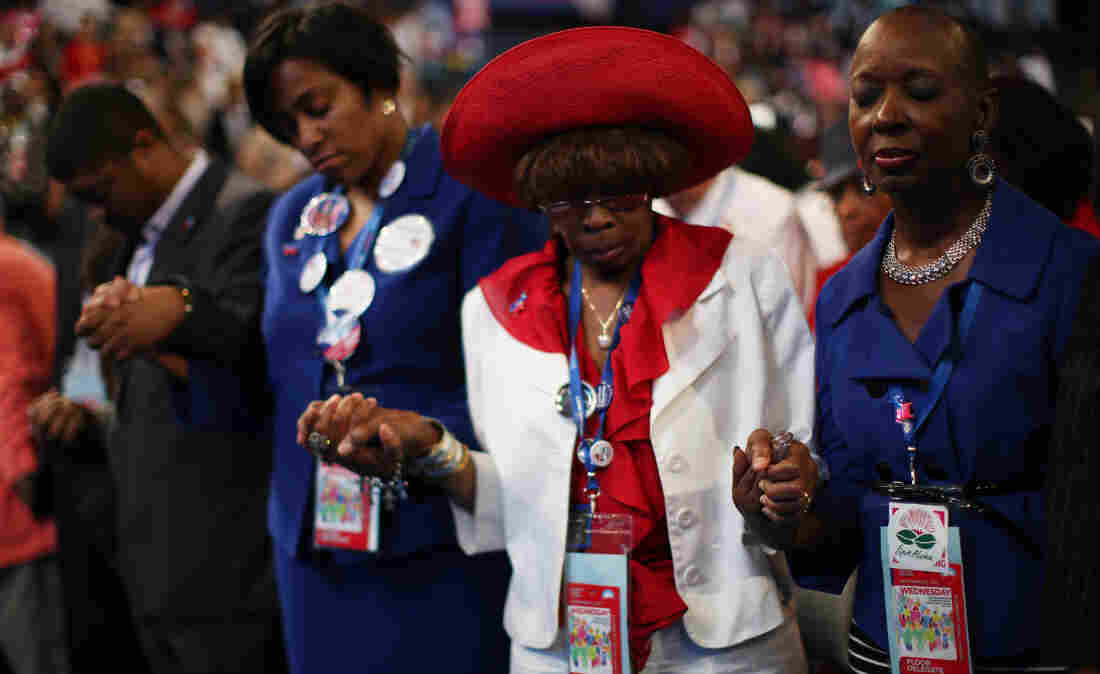 Attendees of the Democratic National Convention in Charlotte, N.C., pray during the invocation. Support for President Obama has remained high for some black voters at the DNC, but enthusiasm for him has waned. Chip Somodevilla/Getty Images hide caption 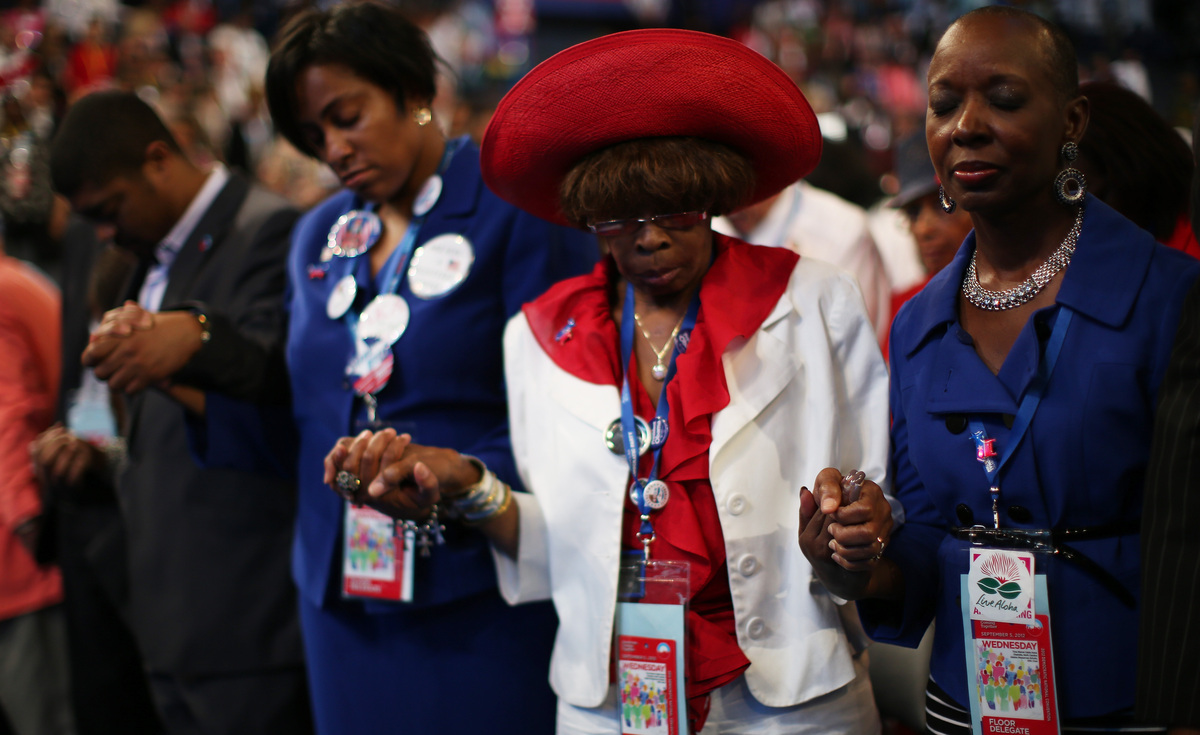 Attendees of the Democratic National Convention in Charlotte, N.C., pray during the invocation. Support for President Obama has remained high for some black voters at the DNC, but enthusiasm for him has waned.

Four years ago black voters threw all their might behind sending Barack Obama to the White House. Today, their support remains high but their enthusiasm is not what it used to be.

And at the Democratic National Convention in Charlotte, N.C., some blacks who voted for Obama are not nearly as excited as they were in 2008.

George Battle Jr., a senior bishop with the AME Zion Church, and a delegate at the convention representing North Carolina, remembers Election Day in 2008 like this: "It was long lines, voting, over into the night, and very, very, very, very happy. It was just a feeling of elation you've never had before."

This fall, he's afraid the lines won't be so long. He sees disappointment among those who thought life under a black president would change overnight — instead came the reality of tough economic times.

"I get more calls from kids in college about helping them with tuition, their parents' lost jobs, can I help them," says Battle. "I get calls from people who are about to lose their houses and have lost their cars and their jobs are downsizing and they're the first ones to [be] let go. And they just don't know what to do."

More than one-quarter of the delegates at this week's convention are black and Democrats are counting on people like Battle to help energize voters this fall. "As an individual I plan to travel the entire state," he says. And this time will be harder to energize voters than it was four years ago, Battle says, "but black folks and African-Americans are used to hard times. It's nothing unusual."

Four years ago, college students played a key role in turning out the black vote. This week, the Congressional Black Caucus convened a seminar at Johnson C. Smith University. Black student leaders from more than a dozen colleges were there to meet members of Congress and share in the excitement of the convention.

Rena Bates, a senior at UNC Charlotte, was too young to vote in 2008, but she does remember her high school awash in Obama shirts and posters. She says that everyone was on the Obama bandwagon.

"It was to see somebody different and to see someone who looked somewhat like us. We were down-for-the-cause kind of thing," Bates says. "And I feel like today it's still that same picture, but I feel like now people are starting to realize, 'OK, what does he do for me?' I feel like now we're voting with a more educational vote than just bandwagon vote."

While many here credit the president with securing their financial aid, others see a lack of progress on issues that matter to them — foremost, the economy. The unemployment rate among blacks stands at 14 percent.

But Thomas Sumter, a senior at Voorhees College, says another problem is complacency.

"Right now I think as minorities, we kind of are believing that since we already elected the first African-American president that this year we can take a laid-back approach to the election," he says. That means African-Americans will still help get him elected, but they just won't do so as aggressively as they did in 2008.

Timothy Graham, 50, a student and a student mentor at Central Piedmont Community College, lost his right to vote after being convicted of a felony. In 2008, he discovered his voting rights could be restored. His first-ever vote went to Barack Obama, and he says he plans to vote for him again in November.

"Considering what he inherited, I think he's doing a great job," Graham says. "My personal opinion, if it goes the way the Republicans want it to go, it'll just be two classes, the rich and the poor. I think we just need to give him another four years to let the plans that he's already set in place take full fruition."

Missouri Rep. Emanuel Cleaver, head of the Congressional Black Caucus, says one thing is clear: The president cannot go into this election with any arrogance.

Sure, Obama is likely to still get 95 to 97 percent of the black vote, he says, but of what total? "We realize there is going to be some falloff. It's inevitable," Cleaver says. "What we cannot have is people who are not excited because they felt the president did not walk on water and so they decided to stay home."

This election "will be like any other election where we have to go out and knock on doors and pull people out and put them in cars whereas four years ago they were standing out on curbs in the rain, sleet, snow, hurricane, volcanic eruptions — it didn't matter. That's not going to happen this time," he says.

Cleaver compared it to a second wedding. The party may not be as exciting as the first, but that's no reason to stay home.