Accessibility links
Guess Who's Chopping Down The Amazon Now? Despite progress that's been made in Brazil, deforestation is increasing in the other 40 percent of the rainforest. The problem is particularly serious in Bolivia, where a swath of trees two-thirds the size of Delaware is cleared each year.

Though Brazil's Amazon has been the focus of environmental groups for decades, the deforestation rate there has fallen dramatically in recent years as clear-cutting of Amazonian jungle in eight other countries has started to rise.

As a result, the 40 percent of Amazonia located in a moon-shaped arc of countries from Bolivia to Colombia to French Guiana faces a more serious threat than the jungle in Brazil. The culprits range from ranching to soybean farming, logging to infrastructure development projects.

And in no other country is the problem as serious as in landlocked and remote Bolivia. Though better known for its bleak and haunting highlands, 70 percent of Bolivia's land mass is part of the Amazon basin, from biodiverse foothills to lowland jungles. It's an area bigger than California; but every year, nearly 1,400 square miles are deforested, about two-thirds the size of Delaware. 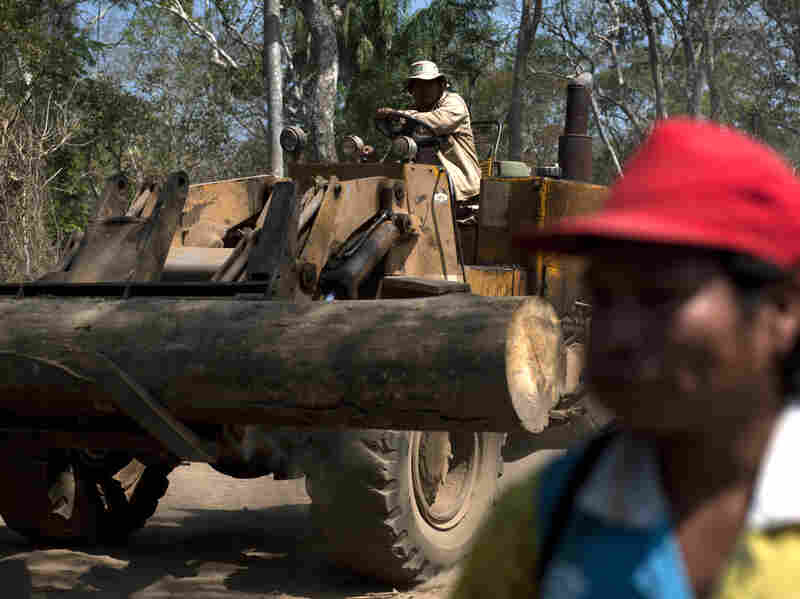 Logs in the Bolivian forest are moved, measured, trimmed and tagged for inspection by ABT — the Bolivian agency of forests and land — before being transported by truck to the town of Ascencion de Guarayos. Carlos Villalon for NPR hide caption 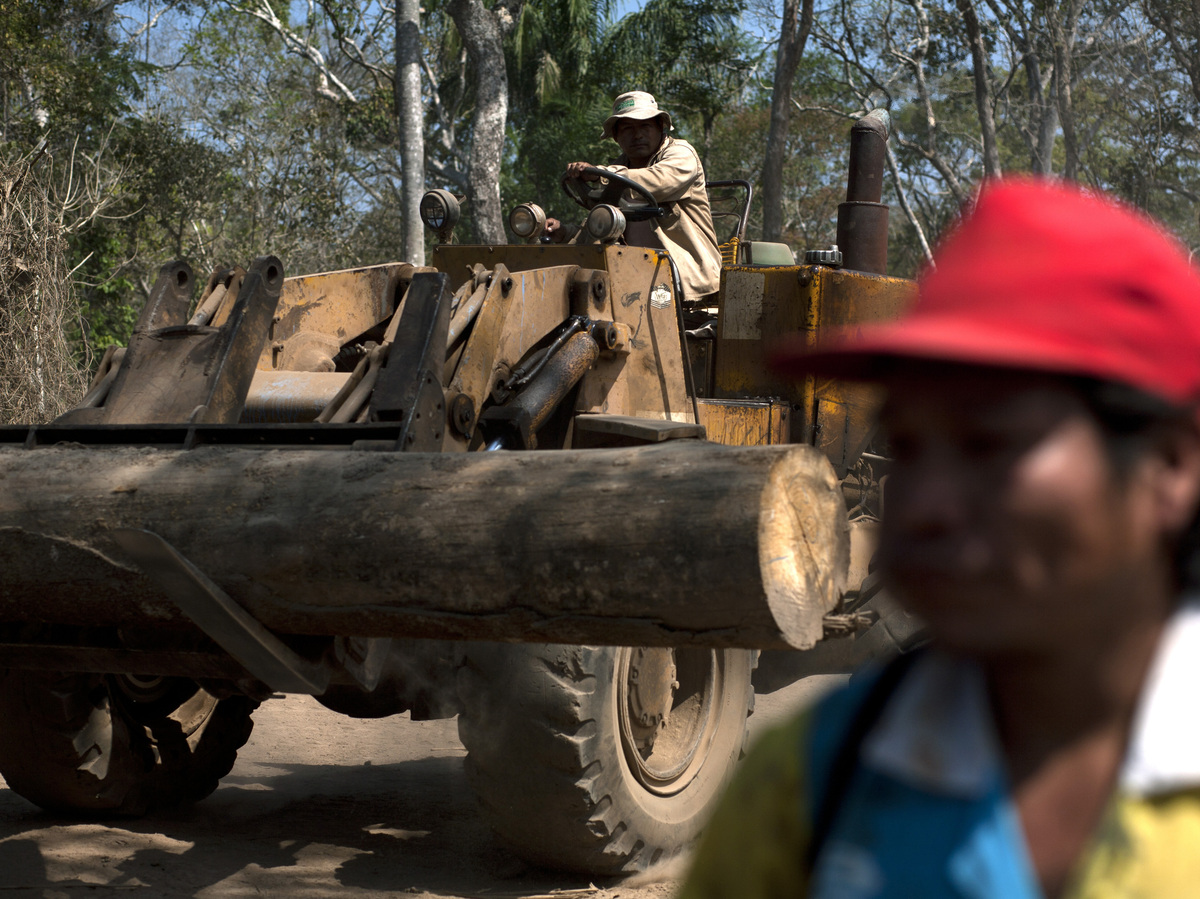 Logs in the Bolivian forest are moved, measured, trimmed and tagged for inspection by ABT — the Bolivian agency of forests and land — before being transported by truck to the town of Ascencion de Guarayos.

Bolivia, which is vast but has barely 10 million inhabitants, has among the highest per capita deforestation rates in the world.

"It's the highest in the Amazonian basin," says Eduardo Forno, director of Conservation International in La Paz, Bolivia's capital. "We have to ask why. I think it's related to institutional weakness and the vision the country has, to extract resources."

It is a vision that is plainly evident in the farms and forests around Ascencion, about 200 miles north of Santa Cruz, a regional capital in the country's east.

On a recent day, logging crews work deep in the jungle in Amazonia's far southwestern corner, looking mainly for hardwoods that will be sawed into planks and shipped to China.

Led by Agustin Villa, a two-man crew — with a single chain saw and plenty of gasoline — works in a ravine filled with heavy brush and big trees. They take down about 25 trees a day, from silk-cotton hardwoods to figs to ceibas, some of them 80 feet tall and decades old.

In the distance, other workers drive earth movers, cutting a path into the forest that will be used to drag out trunks that Villa and his partner saw into big chunks.

"There are areas here that have disappeared, and parts that are fine," Villa says. He then ticks off many stretches of the forest that have been cleared of trees.

For decades, environmentalists had focused much of their attention on Brazil's Amazon, which is bigger than all of Western Europe. They had reason to — just a few years ago, an area the size of Maryland was clear-cut every year, the trees falling to cattle ranchers, soy producers and peasant farmers.

Amazon At A Glance

In recent years, the total amount of deforestation in Brazil's Amazon — which accounts for 60 percent of the total — has plummeted nearly fourfold, from 8,692 squares miles in 2001-2005 to 2,409 square miles in 2011.
But in the remaining 40 percent of the rainforest — spread across Peru, Bolivia, Colombia, Venezuela, Guyana, Suriname, French Guiana and Ecuador — deforestation continues to rise. The problem is particularly acute in Bolivia, which has the highest rate of deforestation in the Amazon.

That has changed as Brazil's government began to stringently enforce land-use laws, and farmers and cattlemen began adopting policies that better employ already cleared land. Deforestation fell by 76 percent between 2004 and last year, according to Brazil's National Institute for Space Research.

"In the last five or six years, there has been a phenomenal change in Brazil with respect to the development process," says Timothy Killeen, an ecologist who has worked for 25 years with major environmental groups across the Amazon. "With Brazil deforestation rates going down and the Andean deforestation rate going up, there's probably more deforestation in the Andean Amazon than in the Brazilian Amazon."

But Thomas Lovejoy, an expert on Amazonian deforestation at George Mason University, points out that it's Brazil's government and Brazilian companies that are funding development such as highway and hydroelectric dam construction in parts of the non-Brazilian Amazon.

"Brazil beats its chest about lowering deforestation rates, but there has to be reconciliation with what Brazil is doing in some of those countries," he says.

In much of the non-Brazilian Amazon, environmentalists say, the development is disorderly, with peasants burning the tree cover and mining companies easily winning permits to carve out a diverse mix of projects.

In Peru, trees are making way for pipelines and dams, while in tiny Ecuador oil companies are expanding their reach. Colombia is trying to develop a region in its far southeast for farming, while producers of African palm oil have been among the big drivers of deforestation. Throughout the whole region, small, poorly regulated artisanal mining, often for gold, brings settlers and destruction.

In Bolivia, as in other places, the deforestation comes from a combination of factors, some illegal and some carried out by the book. The soy farming that is responsible for much of the deforestation, for instance, is driven by farmers and companies that buy up land as part of a policy that Bolivia's government has long encouraged. Much of the logging in Bolivia is also legal.

Diego Pacheco, an adviser on environmental matters to Bolivia's Foreign Ministry, says the government wants to better regulate land use and find a way to both promote sustainable projects and protect the forest.

Pacheco says a new forest policy is in the works and may be ready later this year.

"I think we need to protect, but also we need to manage the forest," he says, noting that many Bolivians live in or on the edge of the forest and need it for their livelihoods.

Martha Zotar, 37, and her family are making a living on land that was once virgin forest. They legally bought 170 acres and are now raising chickens and growing everything from rice to soybeans, the region's cash crop.

"Everyone wants to plant soybeans," she says. "The prices are good and it's easy to grow."

Still, Zotar says she is ever more conscious of the environment — in school, her daughter is learning about how destruction of the Amazon results in climate change, and that has affected Zotar, who points out a clump of trees on her family's land that she wants to preserve.

In One Brazilian Farm Town, Reviving The Forest

"We've got to protect this," she says. "We can't finish everything off."

Deeper in the forest lies a stretch of wilderness that reflects Bolivia's biodiversity. The country has more than 1,400 species of birds, from macaws to toucans to eagles that dart past trees in search of monkeys. There are jaguars, pink dolphins, wild pigs and a range of other mammals.

These days, though, some of these creatures are increasingly sharing the forest with loggers. Much of the loggers' work is legal, provided under concessions that stipulate that only certain trees are to be harvested.

On a recent day at one 1,200-acre concession to a Santa Cruz lumber company, it's tree-harvesting time. The loggers are searching for hardwoods, the most valuable, which are used in homebuilding, and softwoods for such things as paneling. All are cut into sections that go to local sawmills.

"I'm an environmentalist but not an extremist," says Cristian Saavedra, a forestry technician working at the concession. "I think this harvesting of wood is sustainable. It's not deforestation."

But environmentalists say such logging — multiplied many times over across Bolivia — is taking a toll.

And at the concession, one of the loggers, taking a break from the back-breaking work, acknowledges that it's getting harder and harder to find the right trees in Bolivia's forests.

"It's not like before," says Juan Diez, "because it's being finished off. I don't know what we'll do later."