Accessibility links
A Sensitive Raunchfest In 'The Inbetweeners' Picking up where the British TV series left off, The Inbetweeners follows its four immature male protagonists to Crete, where their cruelty to each other and others renders them almost intolerable. But, according to critic Joel Arnold, their experiences are rendered sensitively.

A Sensitive Raunchfest In 'The Inbetweeners'

A Sensitive Raunchfest In 'The Inbetweeners' 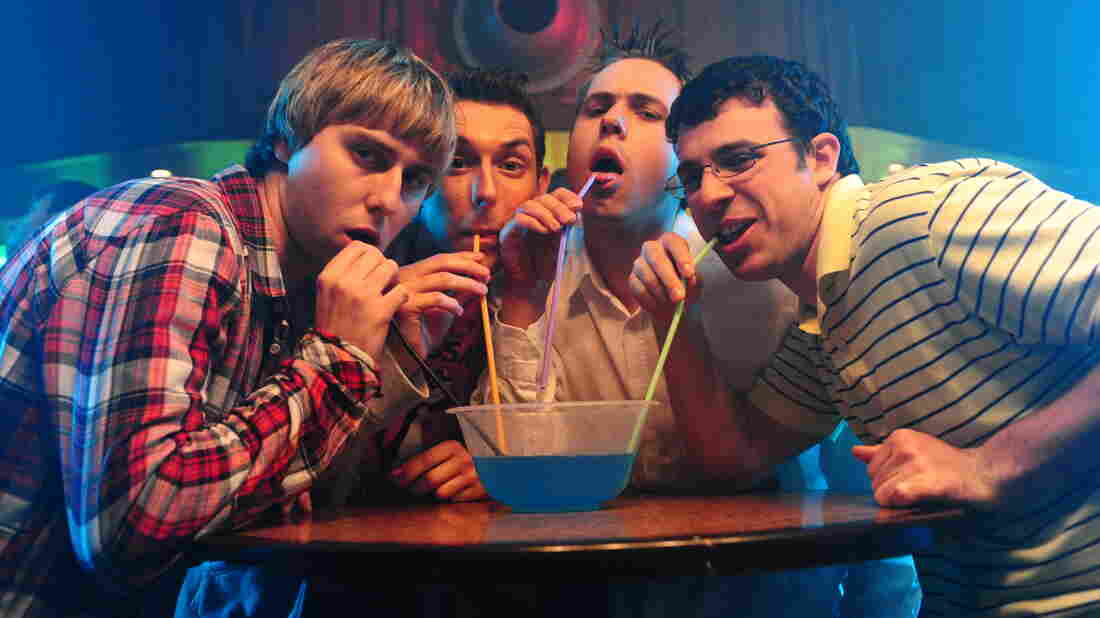 The four ne'er-do-wells of British comedy series The Inbetweeners, fresh out of high school, disembark to the isle of Crete for some tourism and, ultimately, sexual humiliation. Nicola Dove/Wrekin Hill Entertainment hide caption 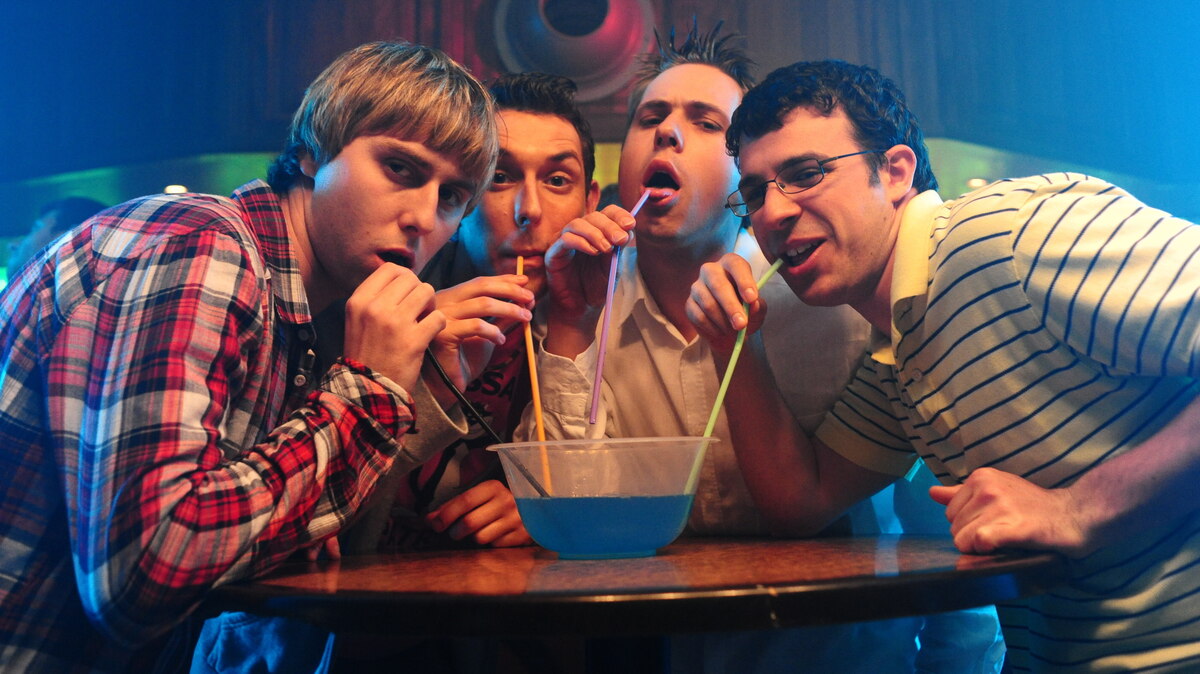 The four ne'er-do-wells of British comedy series The Inbetweeners, fresh out of high school, disembark to the isle of Crete for some tourism and, ultimately, sexual humiliation.

Film adaptations of TV shows long off the air have proven hit-or-miss at the box office. But in recent years, the practice of continuing the story of a popular, recently concluded TV series in a feature film has made for easier business — even when the results are mixed creatively. There's a lot to get wrong in translating a successful series, and therefore a lot to consider: How much of an introduction will a wide audience need to a show's world and characters? How will the storytelling contend with the pacing and rhythms of a different medium? Can the movie offer a plot significant enough that it sustains interest for more than the usual half-hour or hour?

The Inbetweeners, a male-focused and self-conscious teen sex comedy based on the award-winning British TV series, answers the questions of adaptation with aplomb, dispensing a disposable but inventive and intelligent series follow-up which satisfies as a standalone experience.

Written by series creators Iain Morris and Damon Beesley and directed by Ben Palmer, who directed two of the three seasons of the show, the movie picks up the story of four not-quite-popular friends just as they're graduating from their public high school in the suburbs of London. Immediately, the 18 episodes exploring that world are one of the film's biggest assets, even for an audience unfamiliar with the show; the movie dispenses with clunky exposition and lets the audience catch up to characters through their actions.

As an appropriate introduction to the film's frequently bawdy and occasionally pessimistic tone, swaggering and sex-obsessed Jay (James Buckley) is caught half-naked by his mother and sister while doing something involving a hockey glove, a scuba mask, a credit card and lunch meat. They're there to tell him his grandfather has died. Things aren't going much better for earnest and oblivious Simon (Joe Thomas), who is summarily dumped by his girlfriend Carli (Emily Head) in preparation for the transition to university. Will (Simon Bird), the film's witty narrator and the group's most level-headed member, is also the most identifiably nerdy — it seems part of a crushing routine when he doles out sarcastic but hollow gibes as he's graced on the last day of school with one final wedgie from the school bully. The only one who seems to be getting along fine is Neil (Blake Harrison), but you get the sense that, even without a girlfriend, his sunny if slightly dim disposition would keep him happy.

Ready to relieve their academic and sexual frustrations, the guys take off for the teen summer holiday destination of Malia, Crete, which boasts beaches, clubs, alcohol and girls. Although their dank hostel seems minutes away from getting condemned, the group won't be deterred — especially Jay, who marshals Will, Neil and even heartsick Simon to make the best of the trip and have some sex. 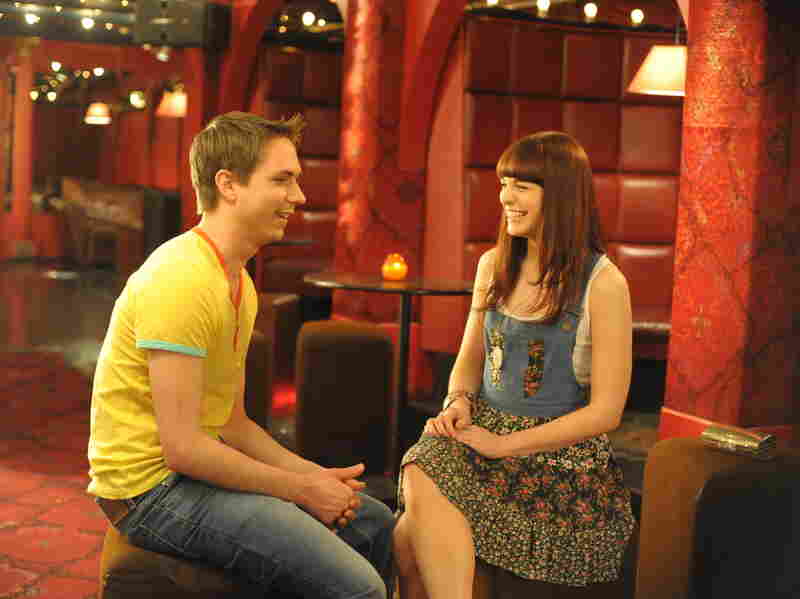 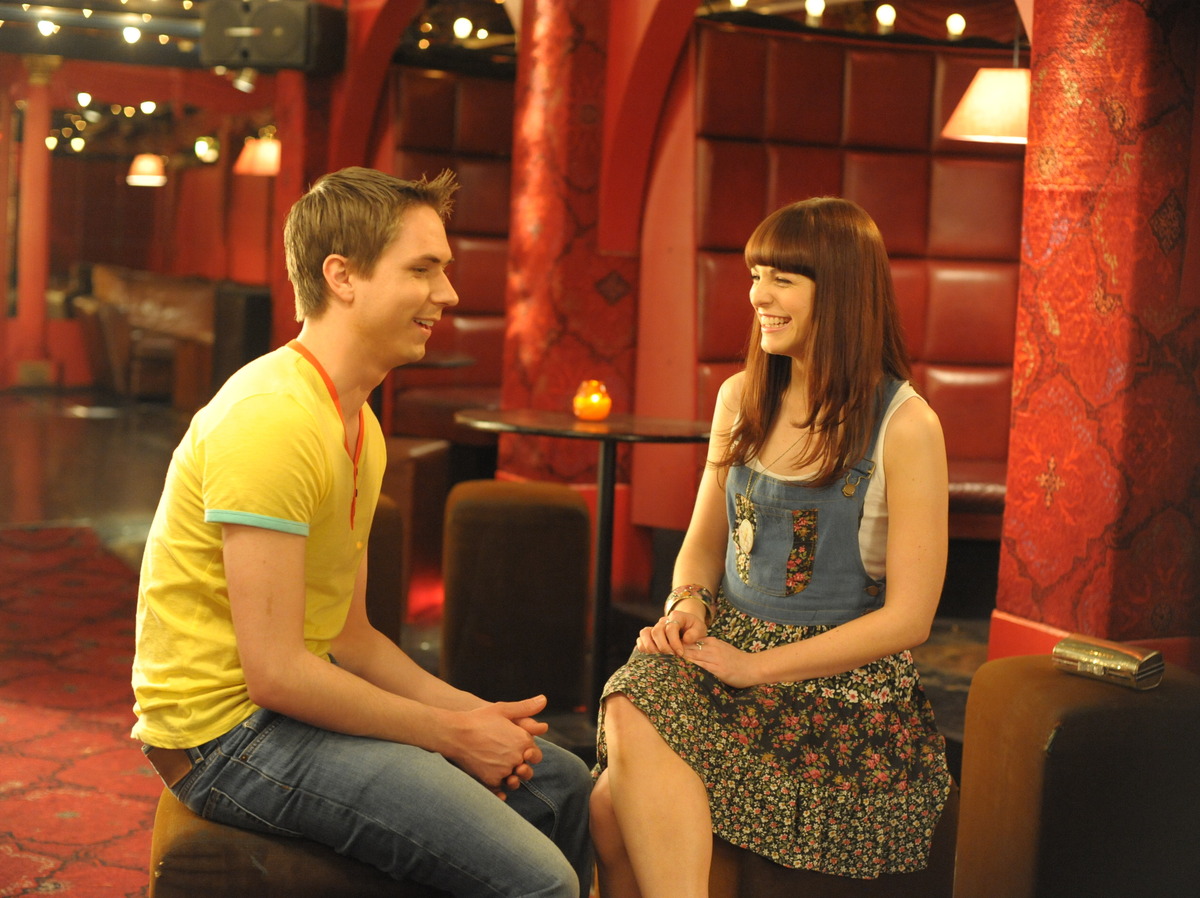 Simon (Joe Thomas), still obsessed with the girl who recently dumped him, shares a connection with Lucy (Tamla Kari).

Unlike many other R-rated comedies of recent years, The Inbetweeners is chiefly a sex comedy, though an unconventional one. While out having too much to drink, the guys (conveniently) meet four mostly available women, and they somewhat hit it off, each in their own awkward way. Will's self-deprecating humor charms Alison (Laura Haddock) in spite of her chiseled Greek boyfriend. In spite of his insecurities about seeming cool, and professing to be uninterested in flirting with someone of a bigger size, Jay develops an interest in similarly foul-mouthed Jane (Lydia Rose Bewley). Simon makes a fleeting connection with clearly interested Lucy (Tamla Kari) in the brief moment when he doesn't talk about his ex, who naturally turns up in Malia. And Neil — well, Neil gets along with just about anyone, including easygoing Lisa (Jessica Knappett).

To the film's credit, the role of women isn't typical of the genre. The Inbetweeners isn't trying to pass the Bechdel test, but its female characters are written sensitively and with more obvious maturity than the guys. And, while sex comedies traditionally traffic in male wish-fulfillment — and, with that, female nudity — that's not the case here. (In fact, there's plenty of male nudity.) Arriving at the sex comedy by way of the comedy of manners, the film playfully exploits male social and sexual anxieties as each guy makes a fool of himself in one way or another. Simon, trying to scrounge up enough money for a ticket to a boat party where he may see Carli, sells all his clothes (even the ones off his back), only to be grifted in the process.

Its raunchiness not withstanding, the most successful comedic bits in The Inbetweeners are character-driven, many of them as awkward as the teenage experiences they portray. The film even risks making its immature protagonists too awful to each other and the people they encounter to be sympathetic. Yet Jay, possibly the film's least likable character, turns out to be one of the most compelling; The Inbetweeners doesn't validate these guys' behavior, but instead places their actions in the context of insecurity and inexperience.

That grounded approach brings a level of realism to the film's few serious moments. In a remarkable display of directorial restraint, one guy's first experience of getting to second base plays out sweetly, nervously and in near silence. Even as The Inbetweeners revels in the guys' sexual failures, it treats their journeys as the significant experiences they are.