Accessibility links
Movie Review - 'Keep the Lights On' - A Nuanced Take On A Doomed Real-Life Love Ira Sachs' reportedly semi-autobiographical romantic drama, Keep the Lights On, follows the nine-year relationship between a filmmaker and a drug-addicted lawyer. The couple on screen is falling apart, but the film itself is sure-footed and satisfying, says critic Bob Mondello. 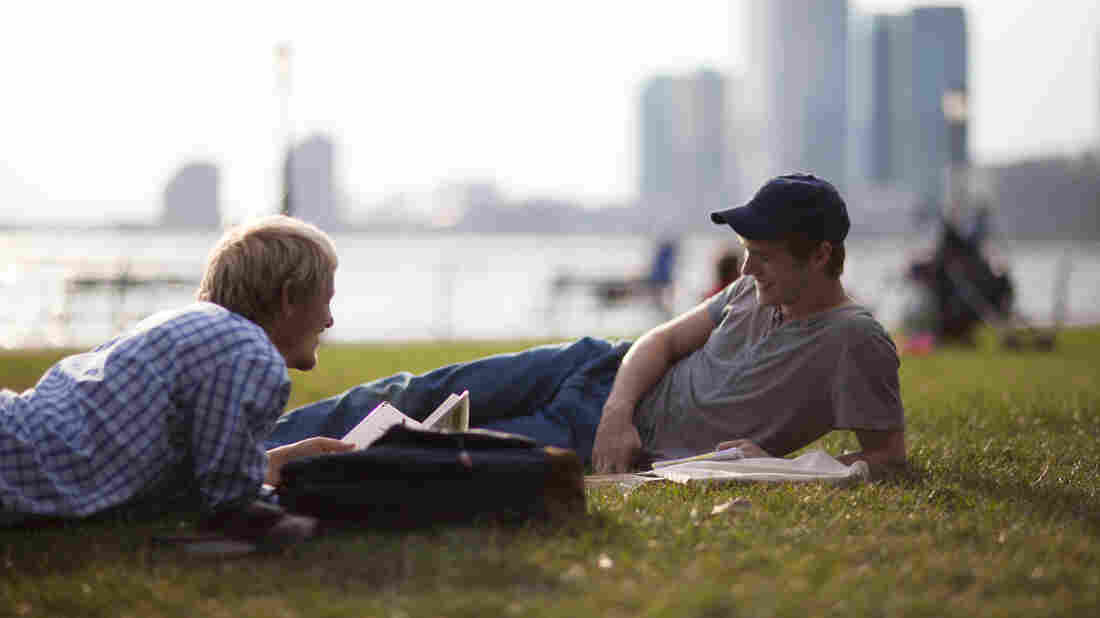 Erik (Thure Lindhardt) and Paul (Zachary Booth) meet through a phone hookup service, but end up moving in together and pursuing a passionate, long-term relationship. Music Box Films hide caption

Keep the Lights On

Hot-weather Hollywood blockbusters have now cooled off, so the cineplex will be a quieter place for the next few months. But there can be intensity even in intimate films, as evidenced by the relationship drama Keep the Lights On.

Erik is a promising filmmaker whose "promise" is beginning to wear a little thin when we first encounter him talking on the phone, on a hookup line for men. This commitment-free shortcut to physical intimacy says a lot about Erik's approach to life. He likes the start of things — follow-through is not his strong suit. Still, this particular hookup goes so well, he dares to hope for something more.

The man on the other end of the phone, Paul, meets up with Erik, but tells him, "I have a girlfriend ... so don't get your hopes up." Nevertheless, they fall back into bed, and into a relationship passionate enough to surprise them both. Paul's girlfriend falls by the wayside, while the men move in together — and stay together for nine years.

There is a glitch in the relationship, though. Paul does drugs — a lot of drugs. It's his "little secret," which he asks Erik to keep to himself because "people in the publishing business like to gossip."

Filmmaker Ira Sachs reportedly modeled this story on his longtime relationship with literary agent Bill Clegg, who's written his own book about struggling with addiction, so ... well, don't get your hopes up, at least about the couple on screen.

The film, though, is as sure-footed as their partnership is not — a nuanced portrait of emotional turmoil, persuasively acted, richly sensual one moment, wrenching the next, and unlike so many films centering on gay characters, not particularly concerned with things like coming out or HIV.

The film is, in fact, evocative of a place and time — Manhattan at the turn of the millennium — when two gay, urban sophisticates could manage to mess things up even though they seemingly have everything going for them: money, passion, a gay-friendly environment and friends so supportive they're almost hectoring in their love.

Given the story's origins, it's understandable that Keep the Lights On keeps its focus on Erik's growth more than on Paul's addiction. The young filmmaker-of-promise matures considerably on screen. And as for director Sachs, one might say Keep the Lights On qualifies as promise fulfilled.