Accessibility links
Plan For Cuban Ballet School A Dance Of Art, Politics Dancer Carlos Acosta left Cuba and went on to become a star with London's Royal Ballet. With the help of a renowned British architect, he hopes to return to his homeland and revive a long-abandoned, landmark ballet school. But his plans are facing opposition, including from the original architect. 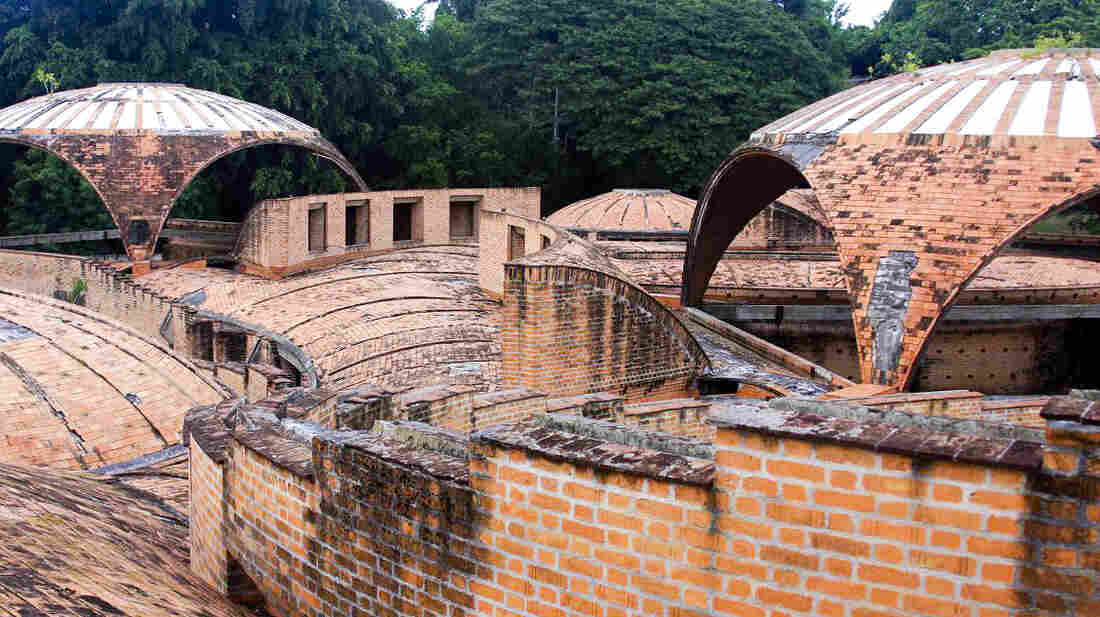 Cuban ballet dancer Carlos Acosta has a bold plan to transform a long-abandoned, incompletely built ballet school in Havana into a global cultural and dance center. But some fear the plan is a step toward "privatization." Nick Miroff for NPR hide caption 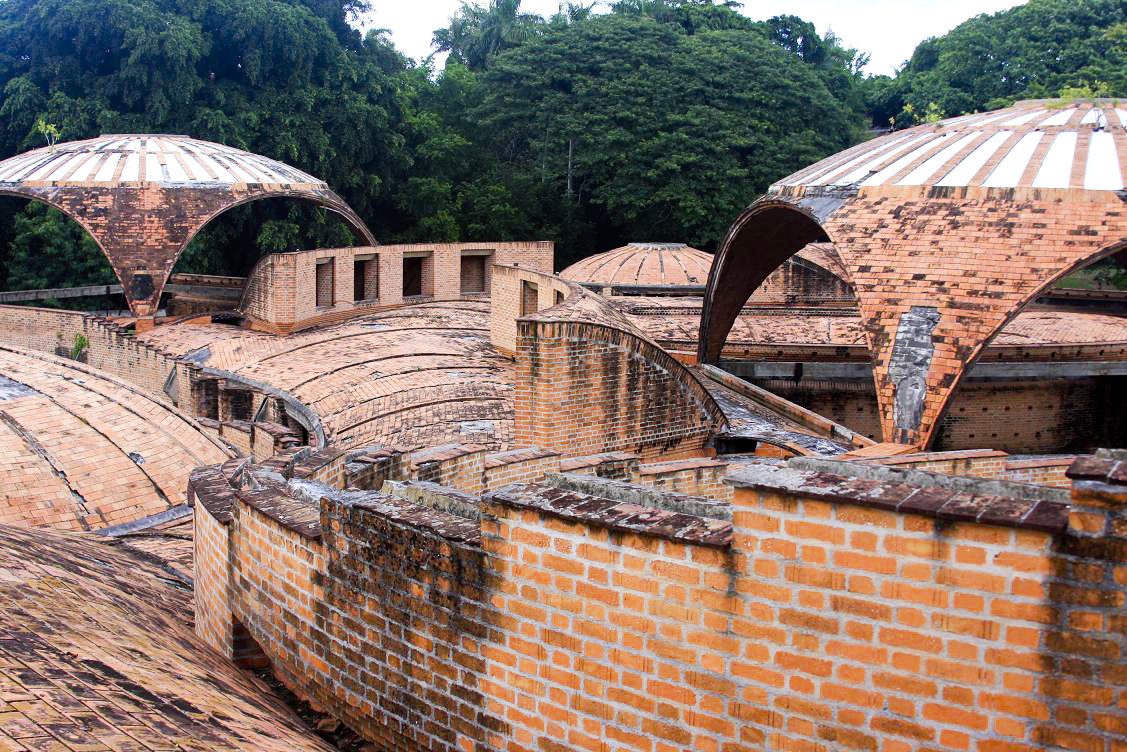 Cuban ballet dancer Carlos Acosta has a bold plan to transform a long-abandoned, incompletely built ballet school in Havana into a global cultural and dance center. But some fear the plan is a step toward "privatization."

A radical proposal to restore one of Cuba's most important architectural landmarks is rekindling a 50-year-old controversy. At the center is ballet superstar Carlos Acosta, who left the island and went on to a lead role in London's Royal Ballet. Acosta wants to return to the island and restore an abandoned ballet school with help from one of the world's most famous architects.

But the proposal has opened old wounds from the school's past and stirred a debate about the future of Cuba's state-sponsored cultural model.

In 1961, Fidel Castro and Ernesto "Che" Guevara — the two young bearded revolutionaries who were running Cuba — were playing golf. After hacking their way through a local course as a press stunt, Castro stopped a young Cuban architect on the street named Selma Diaz. He told Diaz he had an idea for the elegant Havana Country Club he'd recently seized.

"Fidel said to me: 'I want you to build the best art schools in the world. I want something totally unique,' he said, 'that doesn't look like anything else,' " Diaz recalls.

Designs As Radical As Castro's Revolution

Diaz recruited the best young Cuban architect she knew, Ricardo Porro, and within months, he and two Italian colleagues were bulldozing the bunkers and sand traps where PGA stars had played just a few years earlier. Their plan called for five distinct public art schools, with designs every bit as radical as Castro's revolution. 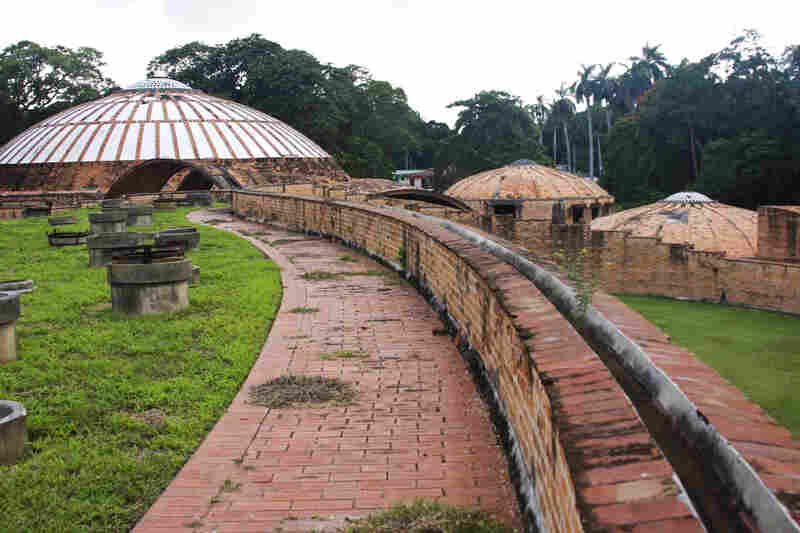 As Cuba drew closer to the Soviet Union, the campus of what was supposed to be the National Ballet School, and its avant-garde architects, came under fire. Nick Miroff for NPR hide caption 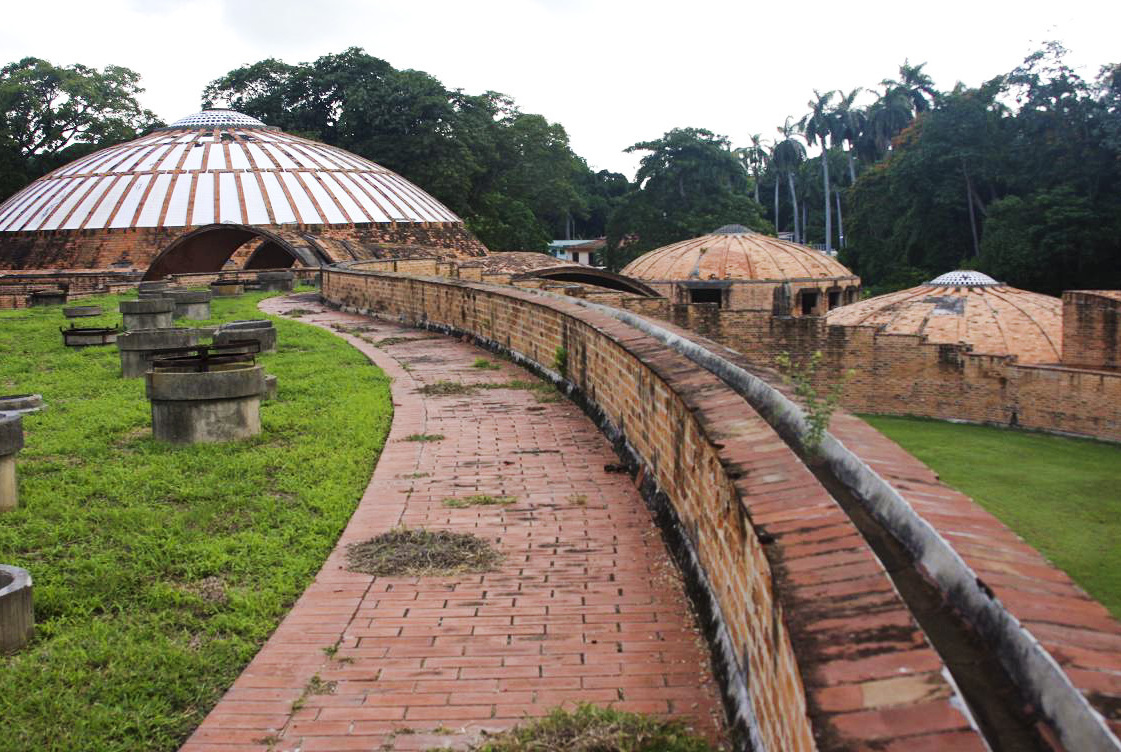 As Cuba drew closer to the Soviet Union, the campus of what was supposed to be the National Ballet School, and its avant-garde architects, came under fire.

Venetian-born architect Roberto Gottardi still has the original sketches to his design for the National Theater School in his small Havana apartment. He had arrived on the island four months earlier, in December 1960, and barely spoke Spanish.

The houses of the county club members were vacant because the owners left the country, says Gottardi, now 85. So the students took classes and lived in the abandoned mansions while the schools were built. It was a time when anything seemed possible.

Castro gave them an unlimited budget and total freedom — at first. But as Cuba drew closer to the Soviet Union, the campus and its avant-garde architects came under fire. The schools' curving, sensuous lines and breast-shaped domes became a scandal. Soviet architecture, with its blocky shapes and cheap, prefabricated materials, was the new standard.

Construction on the project began in 1961 and halted four years later, with just two of the five schools complete. Cuban architect Porro left the country soon after. The other Italian architect, Vittorio Garatti, was jailed in the 1970s and expelled. His ballet school had been left 90 percent complete, only to be converted into a circus academy, then permanently abandoned to looters and the creeping tropical foliage.

Walking through the ballet school today is like exploring a lost city. It's a spooky place, swamped with mud and debris from the nearby river that floods the ground floor. Animals and neighborhood boys come and go as they please. 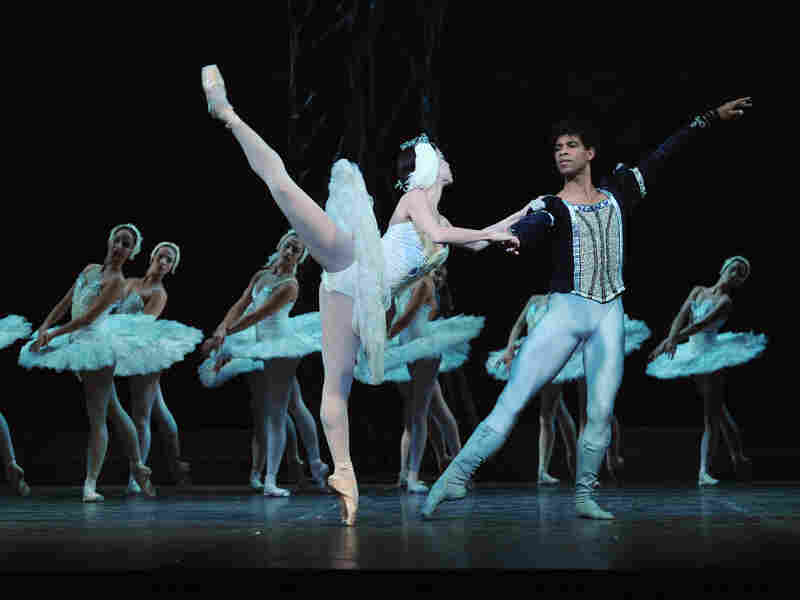 Costa left Cuba and gained fame dancing with London's Royal Ballet. Here, he is shown with Viengsay Valdes during a photo call for Swan Lake performed by the Ballet Nacional De Cuba at the Coliseum in London, on March 30, 2010. Ian Gavan/Getty Images hide caption 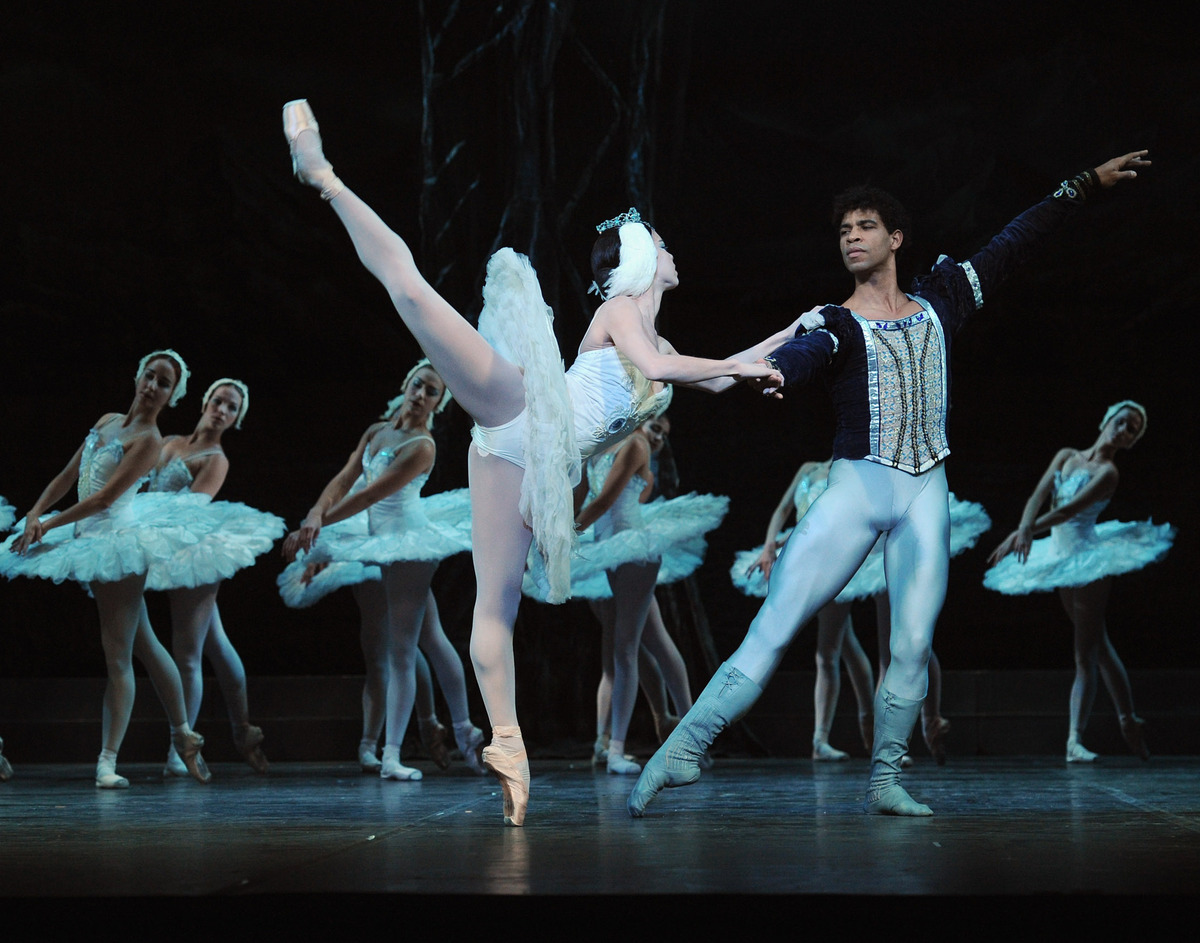 Costa left Cuba and gained fame dancing with London's Royal Ballet. Here, he is shown with Viengsay Valdes during a photo call for Swan Lake performed by the Ballet Nacional De Cuba at the Coliseum in London, on March 30, 2010.

But the school's original structures are intact, a dazzling swirl of red brick shapes and huge domelike Catalonian vaults set against the lush green jungle. The winding corridors, stairways and sightlines come together in a cascade of twists and graceful curves, like music turned to stone.

An apologetic Fidel Castro said in 1999 it had been a mistake to leave the schools unfinished and promised to complete the job. His government started the renovations, then ran out of money, and the project was abandoned yet again.

After another lost decade, someone else has stepped forward: Carlos Acosta, a Cuban dancer with London's Royal Ballet.

Acosta is the living embodiment of Castro's socialist mission to make elite culture accessible to all. Acosta grew up in a poor Afro-Cuban family with 10 siblings, and learned to dance at a state-run academy. He went on to Cuba's National Ballet, but it wasn't until he left the island in the early 1990s that he became an international star.

Acosta is now preparing to retire, and unlike many other prominent Cuban artists or athletes who have left the island, Acosta wants to return and give back. He proposes renovating the abandoned ballet school with millions raised abroad, turning it into a global dance and cultural center he'll run as the head of a nonprofit. Legendary British architect Lord Norman Foster has drawn up the blueprints, and authorities in Havana have embraced the proposal.

"We have to wipe off the bureaucratic mentality that things that come from abroad are bad, or poison," says Miguel Barnet, one of Cuba's top cultural officials. "Not at all. Well-meaning people like Carlos Acosta ... they don't live here any longer, but they love their country, they can help, they can contribute to development of our cultural life."

Opera Unfolds When A Cuban Cabaret Is Shut Down July 31, 2012

But there's a slight problem. Garatti, the original architect, is still alive. He has sent a letter to Fidel and Raul Castro saying Acosta's plan is a dangerous step toward the "privatization" of the school. Other architects in Havana are upset that Foster would potentially alter Garatti's design without his consent.

"You have to accept that 50 years have gone by, but the changes should be done by the architect who was in charge," says Coyula, the Havana architect. "If this architect is no longer able, this is another thing. But the last time I saw Garatti, he was thinking clearly. So there's no reason to put him aside. I don't think it's ethical."

Garatti is in Milan and Acosta is in London, and neither seems close to working out a compromise. Acosta has even suggested he'll take his plans elsewhere if he doesn't get his way in Cuba.

It's now up to Cuban officials to work out a solution benefiting the next generation of dance students, for whom the ruined ballet school is not a symbol of the moment when Castro's revolution carried so much promise. To them, it's just a ruin.