Accessibility links
Critics Say Ryan's Record Belies Tough Deficit Talk Paul Ryan gained national attention and praise from conservatives with bold proposals to cut the deficit and balance the budget. But critics say the Republican vice presidential nominee's talk doesn't match his record. To others, he is more a small-government conservative than a deficit hawk. 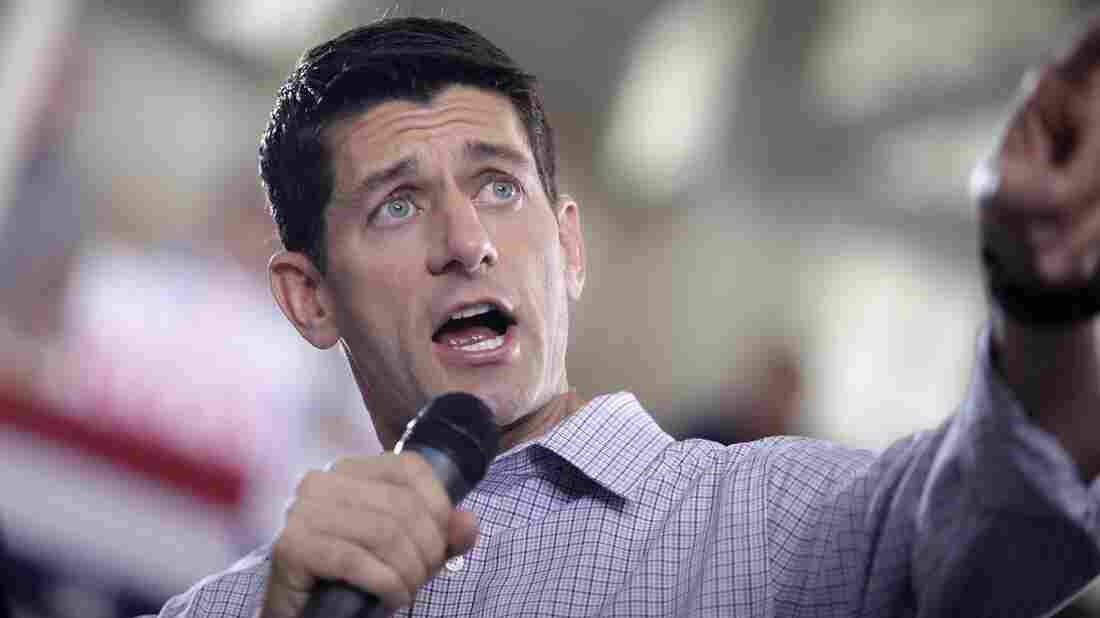 Paul Ryan speaks to supporters in Westlake, Ohio, on Sept. 4. Ryan has been celebrated as a deficit hawk with bold vision, but some critics have called his record on deficit reduction "dismal." J.D. Pooley/Getty Images hide caption 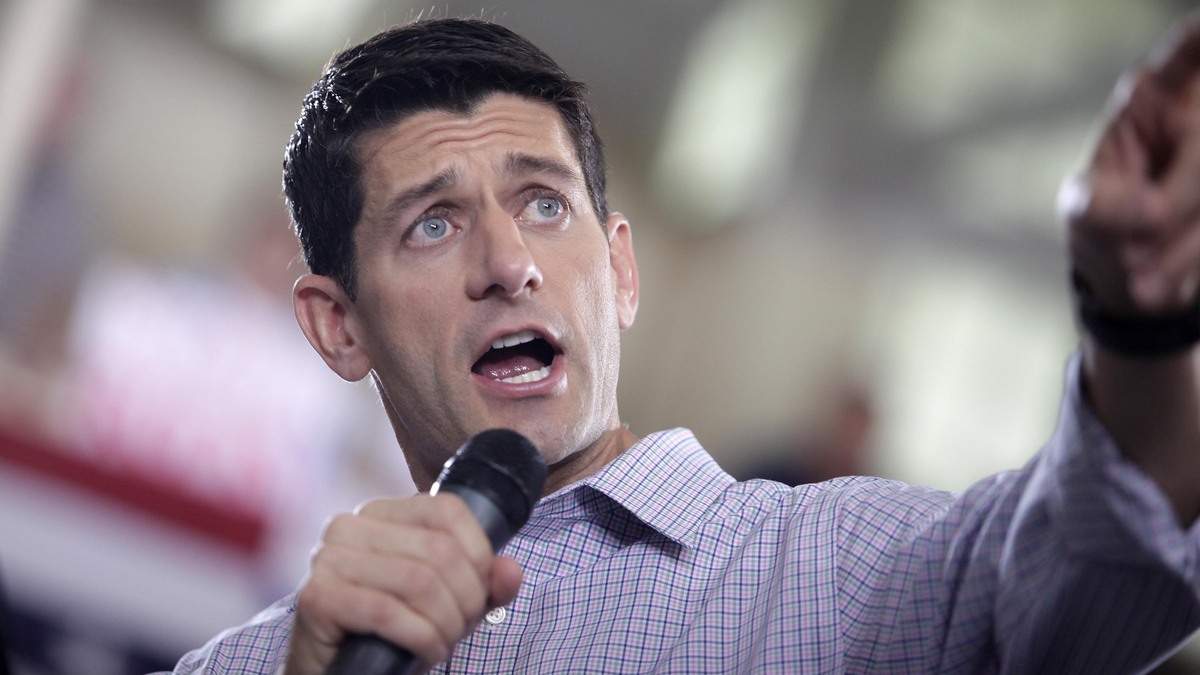 Paul Ryan speaks to supporters in Westlake, Ohio, on Sept. 4. Ryan has been celebrated as a deficit hawk with bold vision, but some critics have called his record on deficit reduction "dismal."

Paul Ryan has a reputation as a deficit hawk. Mitt Romney's running mate has proposed budgets that cut non-defense spending significantly, and advocated controlling Medicare costs by making it a voucher program. But critics argue there's a lot in the Wisconsin congressman's record that undermines his deficit-hawk reputation.

When Ryan gave the GOP response to President Obama's State of the Union address last year, he restated his commitment to debt and deficit reduction.

"We face a crushing burden of debt. The debt will soon eclipse our entire economy and grow to catastrophic levels in the years ahead," Ryan said in the 2011 response speech. "On this current path when my three children — who are now 6, 7, and 8 years old — are raising their own children, the federal government will double in size and so will the taxes they pay. No economy can sustain such high levels of debt and taxation."

That same year, deficit-cutting interest groups gave Ryan a fiscal responsibility award after he unveiled a budget plan that included a controversial proposal to curb the rise in Medicare costs.

Bob Bixby, executive director of the Concord Coalition, praised Ryan for embracing a historically unpopular idea and said he thought to himself, "Now there's a deficit hawk." Despite the praise from the anti-deficit groups, Stan Collender, a longtime federal budget analyst, says Ryan is not a deficit hawk.

Ryan's Mission For Fed: Focus On Prices, Not Unemployment

"The Paul Ryan budget plans are tax cuts masquerading as deficit reductions," Collender says. "And as his own numbers show, even with optimistic assumptions about revenues that'll be raised and revenues that will result from economic growth, he still doesn't balance the budget for 20 years or so."

Collender, who now works for the public relations and lobbying firm Qorvis Communications, does acknowledge that Ryan's Medicare plan could reduce costs to the federal government. But Collender says throughout his career Ryan has talked tough on the deficit but supported policies that increase it.

"It includes everything from supporting tax cuts in the Bush administration to proposing big tax cuts that aren't paid for in his own plan to supporting a war that's not paid for, Medicare Part D plan not paid for and not standing in the way of it," Collender says. "So, his record on deficit reduction is actually quite dismal."

Alice Rivlin, the founding director of the Congressional Budget Office, says the criticism of Ryan misses the point.

"I think you have to distinguish deficit hawk from small-government conservative," Rivlin says.

Rivlin, who was also the budget director in the Clinton White House and is a former vice chairman of the Federal Reserve, says Ryan's primary goal transcends deficit reduction.

"I think of him as a man committed to a smaller government that has less of a role in people's lives," Rivlin says. "He really believes that: that the government does too much. And he thinks taxes should be less."

But Rivlin, who is now at the Brookings Institution, says she thinks Ryan's budget plans depend too much on cutting spending that will hurt the needy, like food stamps and Medicaid.

Douglas Holtz-Eakin, another former CBO director, says he believes Ryan does deserve the deficit hawk label. But, he says, "Not all deficit hawks are created equal."

Holtz-Eakin, who advised John McCain during his 2008 presidential campaign, agrees with Rivlin that Ryan is first of all a small-government conservative. But Holtz-Eakin says Ryan's approach to deficit reduction is quite thoughtful. Ryan has been criticized because his budget proposals take more than two decades to reach balance. Holtz-Eakin argues that slow progress is to be expected if you're addressing entitlement programs like Medicare, Medicaid and Social Security.

Holtz-Eakin does express some unease with Ryan's unstinting support for defense spending. He says what the Bowles-Simpson deficit-reduction effort taught us was that there are spending problems everywhere in the budget, and that includes defense.