Accessibility links
Los Angeles VA Has Made Millions On Rental Deals The West Los Angeles VA Medical Center is a nearly 400-acre campus whose onetime sole purpose was to house veterans, but some say it has lost sight of that mission. The Department of Veterans Affairs has been renting chunks of the land, mostly to enterprises that have nothing to do with helping veterans.

Most Los Angeles residents only know the Veterans Affairs medical center in West Los Angeles as something they glimpse from their cars when they're on traffic-choked Wilshire Boulevard. From the road it looks like a park, but within the grounds is the largest medical facility in the VA's health care system.

The campus is also one of the most fought-over pieces of property in Los Angeles. The nearly 400 acres are in the middle of a densely populated and affluent part of the city. Given its location, the land has been coveted for commercial development. It's also been targeted as a perfect place to provide housing for some of the city's 8,000 homeless veterans.

The VA has had plans to create housing for disabled homeless vets for years. But so far, those plans have gone nowhere. Meanwhile, government documents show that the VA has made millions of dollars renting out chunks of the property to private enterprises.

Vet Floyd Summers regularly makes the 140-mile round-trip trek by train, bus and foot to the medical center for mental health treatments. He's been living in his truck parked in another county because he can't afford the gas to get to the VA. 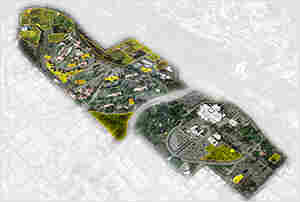 The West Los Angeles VA Healthcare Center has made at least 16 long-term rental agreements, most having nothing to do with services for veterans. NPR hide caption

Summers says he wanted to live right here on the West L.A. campus — and he has, for brief periods of time. The VA and some nonprofits offer transitional housing and emergency shelter. But Summers says nothing has worked out.

"I been trying to get housing for such a long time that sometime I wonder if anybody's hearing me or not," says Summers.

Suddenly, he provides a glimpse of why he's had trouble fitting into one of the established programs here. He abruptly stops talking. He scowls and looks around. He groans. It's hard to tell whether he's angry or afraid.

After a minute, he just picks up the conversation where he left off. This happens several times.

Summers hears voices. He has mood swings. His symptoms started during the Vietnam War when he was a 22-year-old Army recruit stationed in Germany.

Summers is one of 11 veterans with severe mental disabilities who are suing the VA. They're represented by the American Civil Liberties Union and a handful of prominent Los Angeles law firms. Mark Rosenbaum, the legal director of the ACLU of Southern California, says they want permanent supportive housing on the West L.A. campus for mentally disabled veterans like Summers, so that they have "housing that has access to medical and psychiatric services. It's common sense."

Rosenbaum says his clients' severe mental disabilities make it next to impossible for them to access the treatment to which they're legally entitled.

"You can't get medical and psychiatric services if you're living in Skid Row and you're part of a cycle of homelessness."

Neither the VA nor the Justice Department would speak with NPR because of the lawsuit, even though part of it has been dismissed. But if you try to figure out their position from what they say and do, you may come away confused. For example, in a document responding to the lawsuit, the government contends that the VA has no authority and no funding to create housing. Yet there is long-term supportive housing for homeless disabled veterans now under construction at another VA facility in the Los Angeles area. 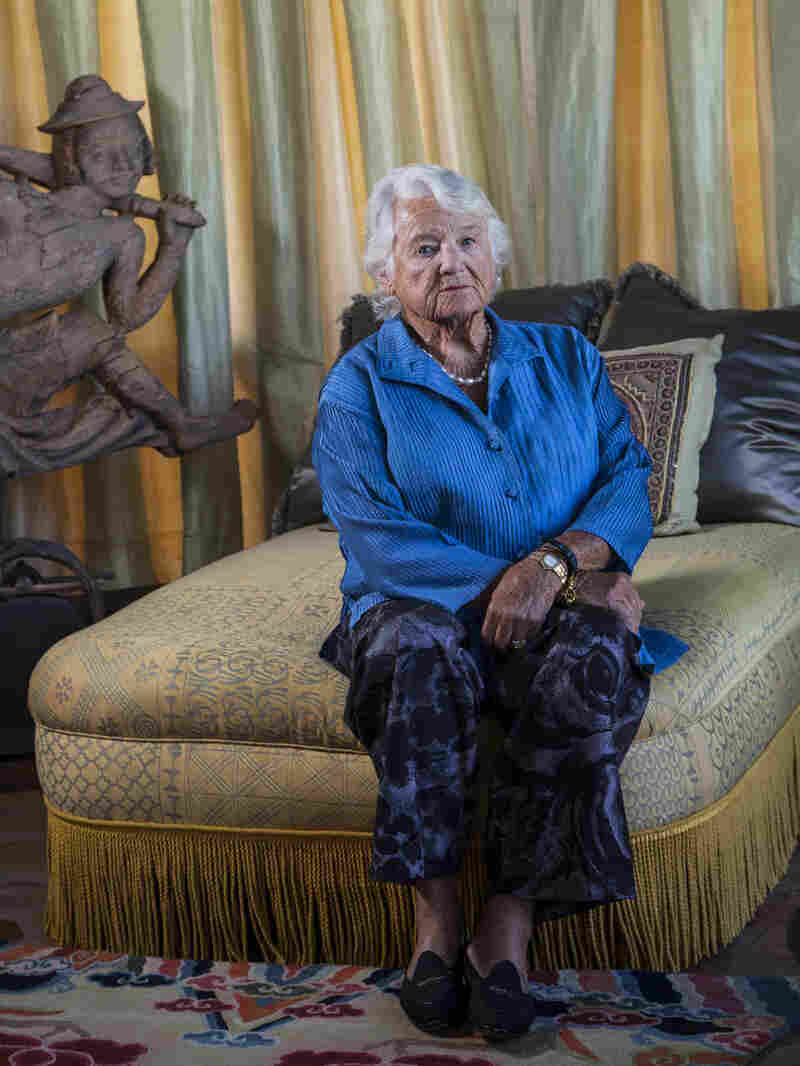 Carolina Winston Barrie is the great-great niece of Arcadia Bandini de Baker, who donated the land for the Los Angeles VA campus in 1887. Winston Barrie spent years trying to get the VA to maintain the intent of the gift. Instead, parts of the property have been leased to various commercial enterprises. Nancy Pastor for NPR hide caption 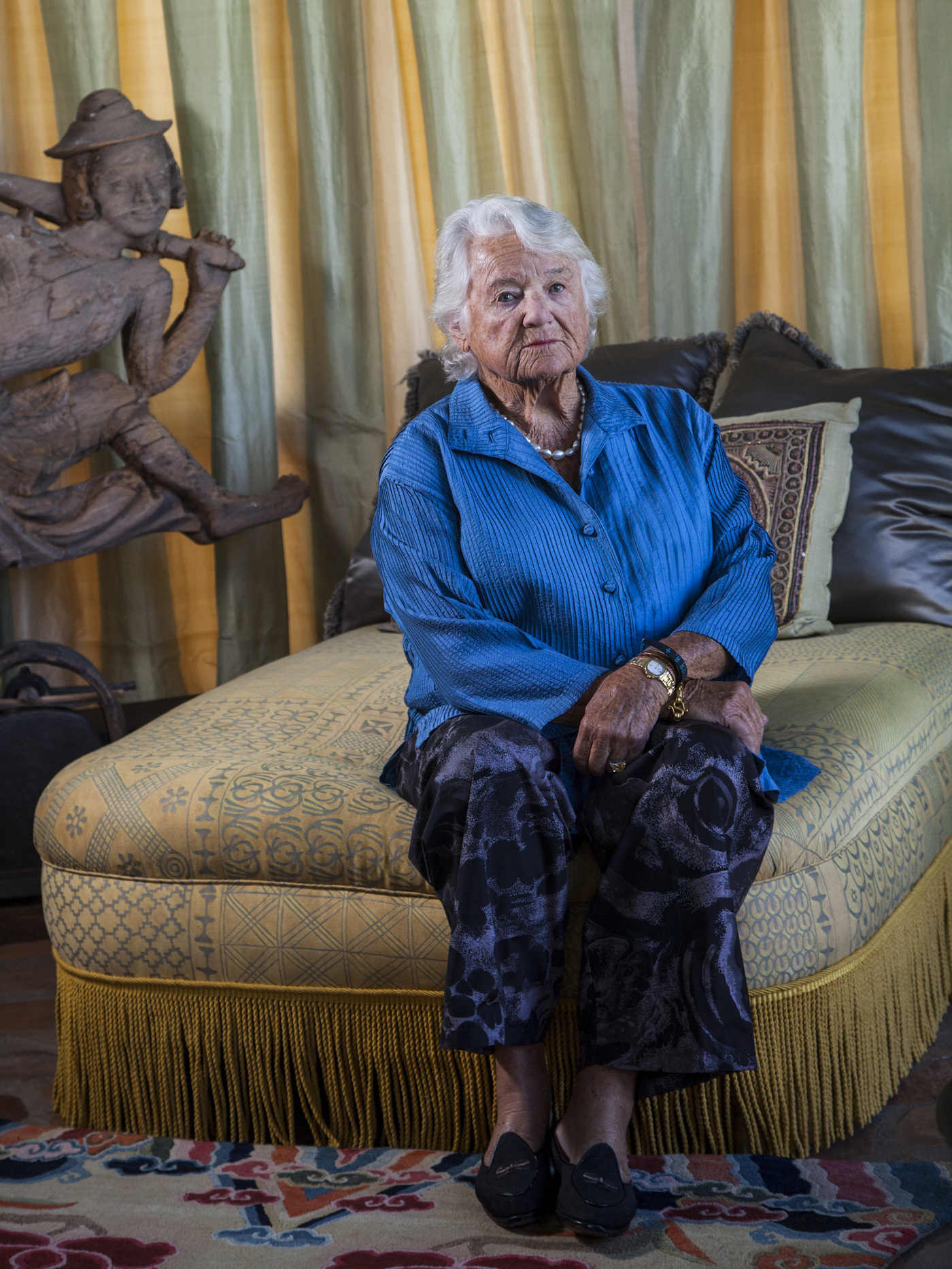 Carolina Winston Barrie is the great-great niece of Arcadia Bandini de Baker, who donated the land for the Los Angeles VA campus in 1887. Winston Barrie spent years trying to get the VA to maintain the intent of the gift. Instead, parts of the property have been leased to various commercial enterprises.

Then there's the history. At one time the sole purpose of the West L.A. campus was to house veterans. That began in the late 19th century, when a couple of prominent Californians donated the land to the federal government specifically to create a home for disabled soldiers.

Carolina Winston Barrie, 84, is the great-great-niece of one of the land donors, Arcadia Bandini de Baker. At one time, Winston Barrie was also part of the lawsuit, hoping to have her family's original deed enforced. She knows every inch of this place and what it used to be.

"This was a fully functional city within the county of Los Angeles," says Barrie. "It had everything — a post office, the trolley station." She says there were "150 acres under cultivation. Orange trees all over the place. You can't see an orange tree anymore."

But what you can see, if you know where to look — and what really bothers Barrie — are the enterprises here that have nothing to do with helping veterans.

On a drive through the campus, she points out the stadium where the UCLA baseball team plays, the 20-acre athletic complex for an exclusive private school, the laundry facility for Marriott Hotels, and the place where 20th Century Fox stores sets. On the far side of the property were parking lots full of rental cars and school buses.

The West Los Angeles VA has made more than a dozen of these long-term rental deals. Most of them have nothing to do with services for veterans.

That's led Rep. Henry Waxman to conclude that "the West L.A. VA was in business for itself." The VA campus is in Waxman's district. He and Sen. Dianne Feinstein have been trying to protect the property from commercialization for years. During the Bush administration, there were proposals to use the land for condos, office towers, a shopping mall. At the time, Waxman went to talk to then-VA Secretary Jim Nicholson.

"He told me when I went to meet with him that he was a real estate developer, and this was prime real estate, and we could make a lot of money by commercializing it, selling it off and letting people build whatever they wanted to build," recalls Waxman. "And then he said that money could be used for veterans."

Waxman and Feinstein got legislation passed making it illegal to sell or even lease the property. But that didn't put an end to the rental agreements. That's because legally, the West Los Angeles VA hasn't been leasing the property; they've been sharing it.

They've used a law that says the VA can share facilities "to secure health care resources which otherwise might not be feasibly available." The ACLU lawsuit is challenging the rental agreements, too, arguing that they have nothing to do with veterans health care. At least three agreements have recently been terminated.

Meanwhile, what Waxman wants to know is where the money's gone.

"They earn extra money, which they use — they tell us — for ... VA services," says Waxman. "The reason I say, 'They tell us they use it' is [because] we've never been able to get a lot of the details ... of exactly how much money they got and how that money was used."

Where the money went may be a mystery, but NPR has been able to estimate how much money the West L.A. VA has taken in. Through the Freedom of Information Act, NPR obtained the major long-term rental agreements as well as related correspondence between the VA and members of Congress.

Some data are missing and some of the documents conflict, but it appears that over the past dozen years, the West Los Angeles VA Medical Center has taken in at least $28 million and possibly more than $40 million.

Waxman knows what he'd like them to do with the money. "There are many needs that are not being met," he says, "including housing for homeless veterans."

The VA did designate three vacant buildings on the campus to be converted to housing for disabled homeless vets. They announced that in 2007, but took no action. In 2010, the agency announced it would spend $20 million to rehab one of those buildings. It was supposed to open this year. They have yet to break ground.