Accessibility links
Chicago Strike Emblematic Of Union Struggle Teachers unions were once a dominant force in American politics and education policy. While still major players, they are rapidly losing strength and having a harder time finding reliable allies. 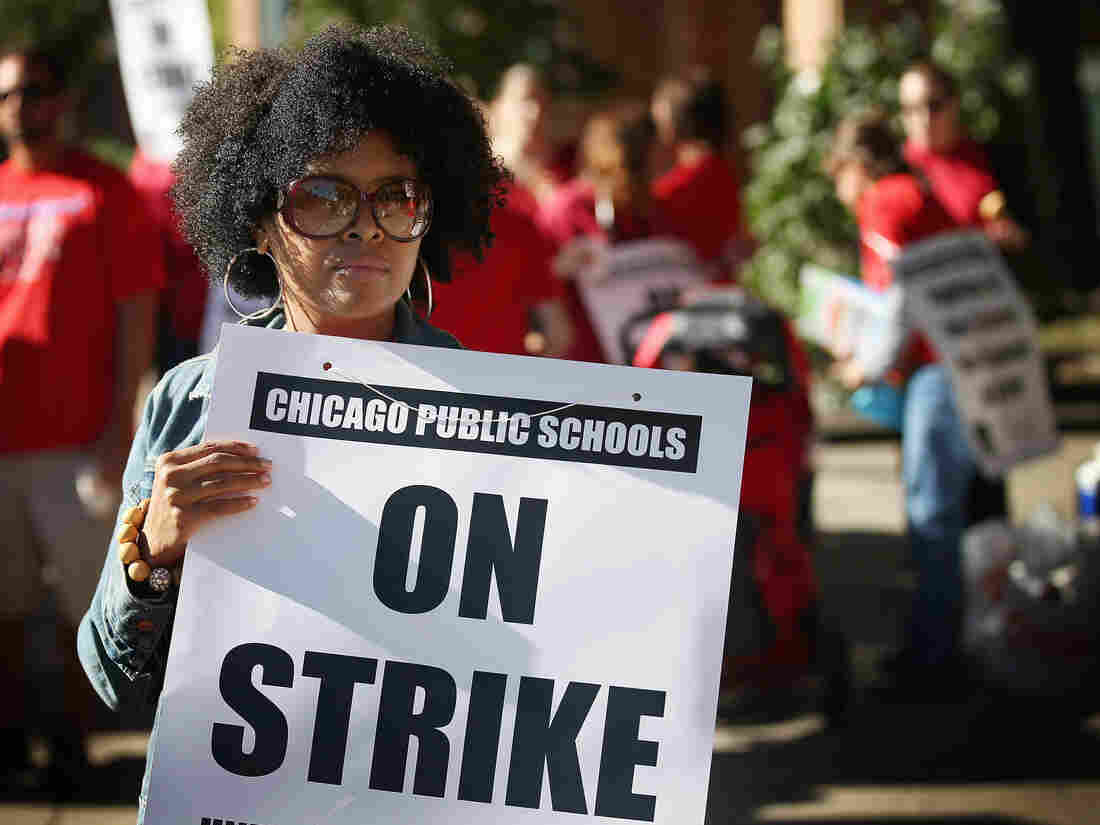 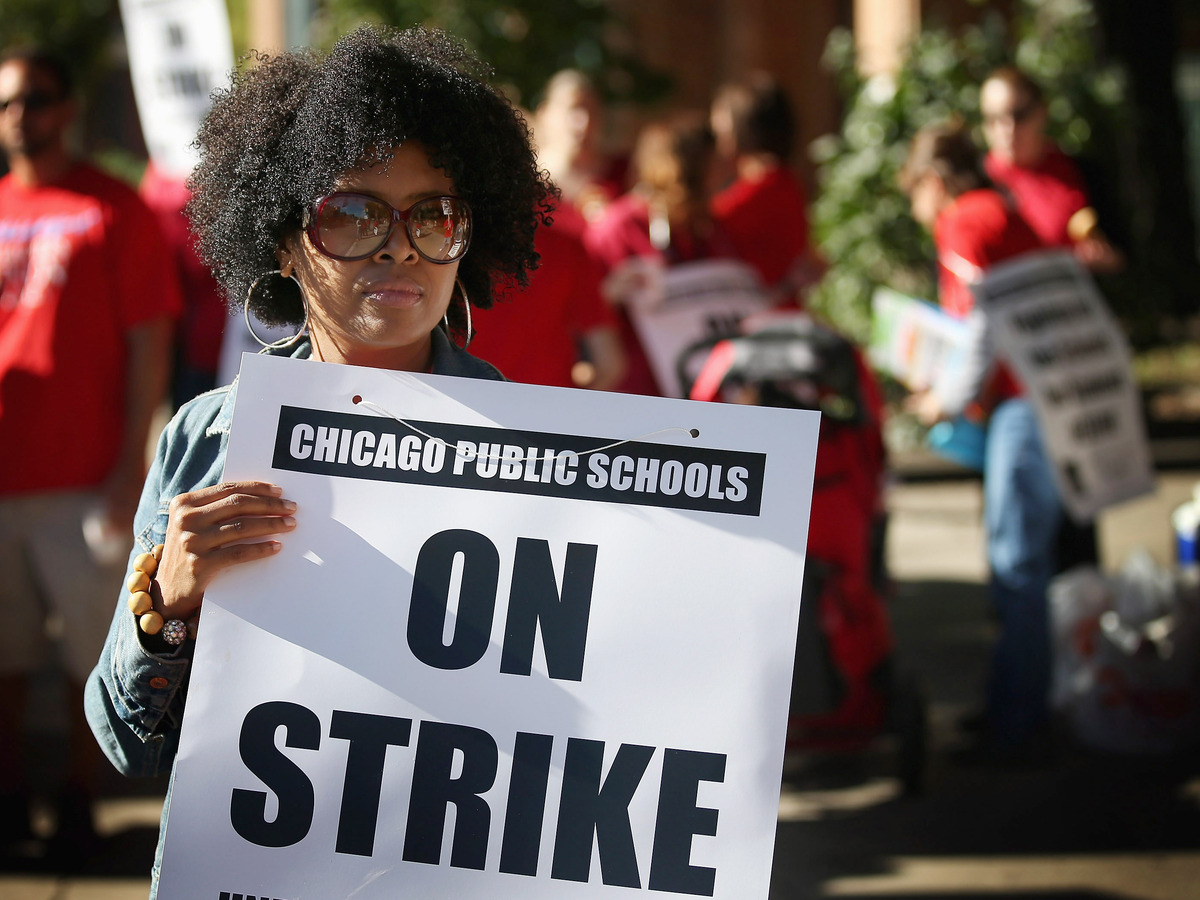 The strike that shut schools in Chicago on Monday illustrates a larger, national trend: Teachers unions are having a harder time getting what they want.

For decades, teachers unions have been among the most powerful lobbying groups in nearly every state — and have been arguably even more powerful at the local level, where they've often been able to unseat school board members and even mayors who crossed them.

"Although they've been criticized in the past, they have not been under any real pressure to change," says Tim Daly, president of The New Teacher Project, which helps train and place teachers.

That's no longer the case. Since the 2010 elections, four states — Idaho, Indiana, Tennessee and Wisconsin — have either eliminated or largely curbed collective bargaining rights for teachers.

The result of these laws, along with widespread teacher layoffs due to state and local budget woes, has been a sudden and rapid decline in union membership. The National Education Association, the largest teachers union, has lost 100,000 members since 2010, leaving it with a membership of about 3 million. The NEA projects it could lose 200,000 more by 2014.

The political and policy challenges that teachers unions face have left them with two choices, says Richard Kearney, a political scientist at North Carolina State University: They can take a more collaborative approach and seek to embrace and shape ideas that they have largely opposed to this point; or they can stand their ground when it comes to questions about personnel management, which is exactly what's happening now in Chicago.

How the strike plays out — and what the public thinks about the arguments the Chicago Teachers Union is putting forward — could have a big influence on how teachers unions fare nationally in the coming years.

"It's impossible to overstate how much the debate has changed over the past 10 years," says Andrew Rotherham, a co-founder of Bellwether Education Partners, which advocates for low-income students, and a columnist for Time. "The unions have to figure out how to adapt to this new environment."

There was a time, in the not-too-distant past, when teachers unions dominated public debate about education and won broad sympathy with their calls for higher salaries and smaller classroom sizes.

"The conversation simply couldn't proceed without them and you couldn't make changes without getting their buy-in before," Daly says.

To cite just one example, the California Teachers Association had no trouble raising $50 million from its members in 2005 to defeat a ballot measure that would have extended the amount of time it would take new teachers to get tenure from two years to five years.

Unions have objected, to a greater or lesser degree, to many of the other so-called reforms that have been promoted in recent years, including the growth of charter schools, changes in teacher evaluation and offering merit or differential pay for higher-performing teachers.

"The union philosophy is one that emphasizes consistency, that individuals workers are all going to get the same salary and working conditions, as much as possible," says Paul Kersey, director of labor policy at the conservative Illinois Policy Institute.

Outgunned And Under Attack

The thing is, the general public has come to favor many of these ideas. Teachers unions are also having a hard time gaining public sympathy because their members are often no longer seen as underpaid, as was generally the case 20 years ago. Average teacher salaries vary widely by state (and even by district), ranging from a low of $39,850 in South Dakota to $72,708 in New York, according to NEA figures.

"If you're the union going to the mattresses defending a 30 percent pay raise for these guys at a time of 8 percent unemployment, that's probably not the best story line," says Rick Hess, director of education policy studies at the conservative American Enterprise Institute.

Mitt Romney, the Republican nominee for president, wasted no time castigating the Chicago Teachers Union for its action.

"Teachers unions have too often made plain that their interests conflict with those of our children, and today we are seeing one of the clearest examples yet," he said in a statement.

Kearney, an expert on labor relations in the public sector, says that the attack on teachers unions is part of the broader assault on public sector unions that has held them to blame for the skyrocketing pension and health costs many governments face.

"With the Supreme Court decision in Citizens United, there have been vast amounts of superPAC money overwhelming the amount of money that unions and their allies can raise to defend themselves," he says.

Unions have also sometimes found themselves at odds with their traditional allies in the Democratic Party. When Vice President Biden addressed the American Federation of Teachers in July, some members of the Chicago union held up signs protesting Obama administration education policies.

The administration's Race to the Top grant program promotes ideas, such as merit pay and more stringent teacher evaluation systems, that are among the sticking points in Chicago.

"The unions know the education landscape has shifted," says AEI's Hess. "They see that the center of gravity among Democrats has moved toward education reform."

The teachers unions are backing Obama, but, as NPR's StateImpact reports, their support for Democrats is no longer a given.

During his inaugural address last year, Chicago Mayor Rahm Emanuel said he "rejected" the anti-union policies of Republican governors in Wisconsin and Ohio. But, he added, "We will do no favors to our city employees or our taxpayers if we let outdated rules and outmoded practices make important government services too costly to deliver."

There are examples of unions embracing and promoting new ideas. In Denver, for instance, a merit-pay system was adopted with input from the union.

"For the sake of the students and the sake of the system itself, there needs to be a willingness from all sides to look for practical solutions," says Henry Roman, president of the Denver Classroom Teachers Association.

The education reform ideas that have taken root over the past decade have not always resulted in the type of improvements in student achievement that were initially promised. Some of the success stories have come precisely in those places where districts and states worked collaboratively with unions, who after all represent the teachers that carry out any changes in the classroom.

"We want to be part of the solution because we are part of the system," Dennis Van Roekel, the president of the National Education Association, told a conference of state legislators in Chicago last month. "You can't make good, sustained change unless you engage all the people in the system — all of them."

Some observers say that the NEA, which has long been viewed as more recalcitrant than the AFT in terms of embracing new ideas, has come around lately, given the major threat its loss of membership represents.

Still, policy ideas that change the way teachers are evaluated and managed remain a tough sell to the unions' own membership. Teachers unions are likely to struggle to persuade their members to accept contracts that call for such changes in a time when budget pressures are leading to widespread layoffs.

"Education is like a bad marriage, where we've fought about everything else except the real, underlying issue," says Rotherham, the education consultant. "That's personnel, which leads invariably to the unions."