Accessibility links
Rhetoric Aside, Few Details Of Romney's Tax Plan GOP presidential hopeful Mitt Romney says it is possible to cut tax rates without driving the government deeper into the red, and that he can make up for the lost revenue by closing tax loopholes. But analysts have had a hard time testing Romney's claim because he hasn't offered many specifics. 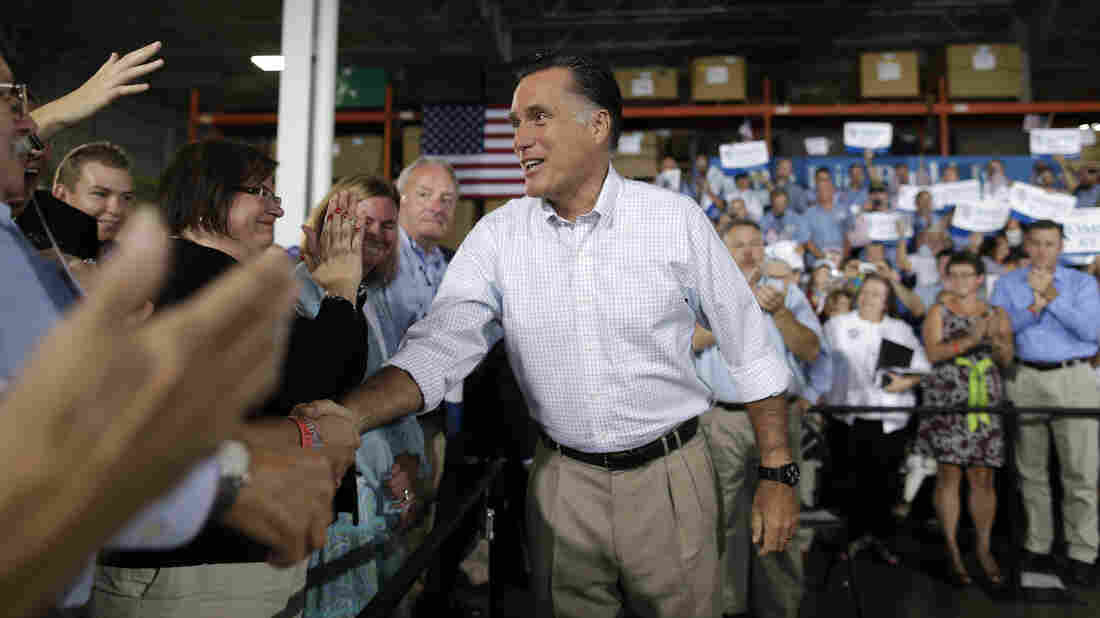 Romney says it is possible to cut tax rates without driving the government deeper into the red, and that he can make up for the lost revenue by closing tax loopholes. But analysts have had a hard time testing Romney's claim because he hasn't offered many specifics.

When he was pressed by NBC's David Gregory this weekend to give an example of a loophole he would close, Romney didn't offer much detail.

It's a general rule of politics ... that politicians promise all things to all people and never promise pain unless their back is to a wall.

Bruce Bartlett, author of The Benefit and the Burden

"Well, I can tell you that people at the high end — high-income taxpayers — will have fewer deductions and exemptions," Romney said.

"When you ask them, well, 'How are you going to do it?' — well, they won't answer real clearly," Obama said at a recent rally. "But there are only a few ways of doing it, and most of them involve sticking it to the middle class."

Obama often cites a study by the nonpartisan Tax Policy Center, which found that under Romney's plan, middle-class families would have to give up some of their popular tax breaks — like the deduction for mortgage interest — in order to offset the cost of cutting taxes for the rich.

The authors said anything else is "not mathematically possible."

"To an economist, those are very strong words," says Princeton economist Harvey Rosen.

"Obviously, I'm a Republican," Rosen says, "[and] it kind of raised my hackles slightly to see the proposal being characterized as 'mathematically impossible.' "

Rosen's study was similar to the Tax Policy Center's. He first looked at how much money the government would lose by lowering tax rates on the wealthy, then tried to figure out how much it could recoup by closing loopholes. Rosen came to the opposite conclusion: that you can cut tax rates for wealthy Americans without shifting costs onto the middle class.

"So it's not mathematically impossible," he says.

Why the difference? Partly because the two studies make different assumptions about what tax loopholes might be on the chopping block. The Tax Policy Center assumes Romney would not want to eliminate tax breaks designed to encourage savings and investment, like IRAs and tax-exempt government bonds. Rosen, however, assumes some of those breaks could be phased out.

Of course, Rosen says Romney could easily settle this debate, simply by spelling out which tax loopholes he'd do away with.

"We wouldn't have to be guessing," he says. "But the kind of specificity that an academic might think is very cool might not make sense for a politician."

In fact, Romney is following a well-worn political path. Bruce Bartlett, author of The Benefit and the Burden, a book on tax policy, says politicians are typically much more specific about the benefits of the tax cuts they're proposing than the burden of the loopholes they want to close.

"It's a general rule of politics, dating back to at least Cicero, that politicians promise all things to all people and never promise pain unless their back is to a wall," Bartlett says.

In fairness, Obama has been equally vague in discussing his own plans for tax reform. He agrees with most policy experts that a tax code with lower rates and fewer loopholes would be more efficient. But like Romney, he hasn't spelled out which loopholes he'd cut. Bartlett says that omission is less glaring in the president's case.

"Obama has not made tax reform, by any stretch of the imagination, the centerpiece of his campaign," he says. "Whereas I think it would be hard for people off the top of their heads to say what else Mitt Romney stands for."

For now, tax analysts and voters will just have to keep guessing about how Romney's plan would work, and decide whether they trust the candidate to fill in the details after the election.