Accessibility links
Fears Of Currency Devaluation Mount In Egypt Throughout the government's transitional period, the Egyptian pound remained stable because the government shored it up through foreign reserves. As those reserves reach dangerously low levels, concern is mounting that a major currency devaluation is imminent. 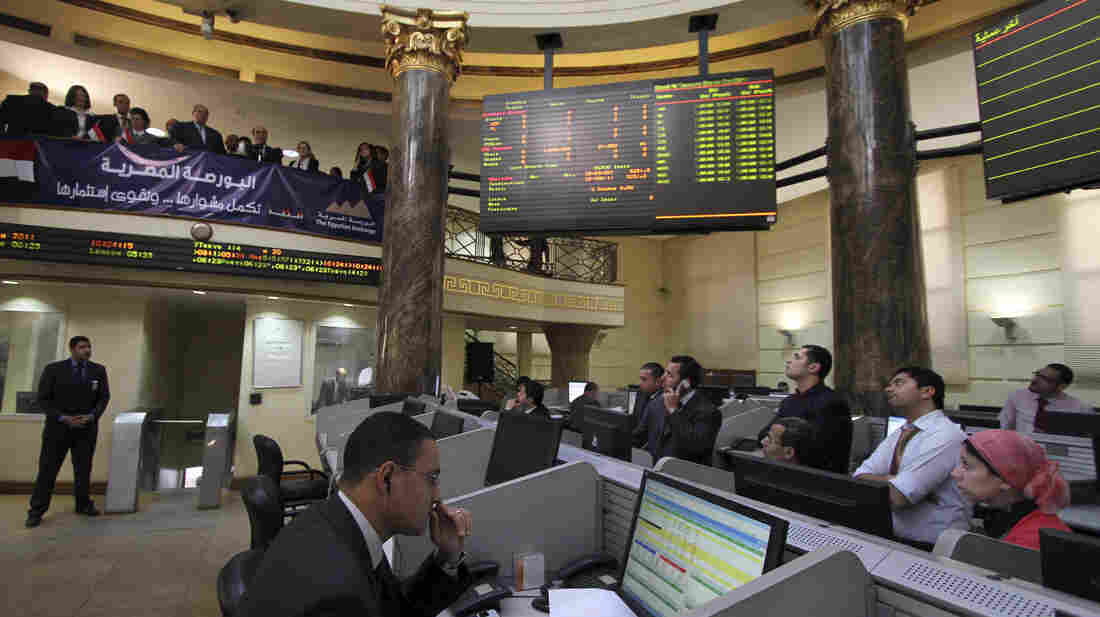 Egypt's stock market has been volatile since Hosni Mubarak was ousted. Though analysts say there are reasons for cautious optimism, concerns about the country's currency remain. Khalil Hamra/AP hide caption

Egyptians have been struggling economically since the revolution last year that ousted President Hosni Mubarak. The Egyptian pound has remained relatively stable, though, because the central bank shored it up through foreign reserves, which prevented food prices from skyrocketing.

But despite increasing political stability, concerns about the currency remain.

The market has been volatile since Mubarak was ousted, swinging up and down with Egypt's political unrest.

Samer Atallah, an economics professor at the American University in Cairo, says that political uncertainty had been causing investors to flee.

But now, he says, "it's pretty clear, so I think it is plausible that investors, tourists, would start to go back to the country. I think the mood of stability — economic stability — is on the rise."

Wael Samir, the manager of a small currency exchange, is also cautiously optimistic.

He says that for several months after the revolution, people were exchanging large sums of Egyptian pounds for dollars because they feared a major drop in the currency. Now, he says, business is running as usual, even though the pound has gradually dipped to its lowest level against the dollar in seven years.

So far, Egypt has managed to avoid the "doomsday scenario" of its currency bottoming out, by propping up the pound with foreign reserves. But now those reserves are running low, estimated at less than half of what they were in 2010.

To stave off devaluation, Egyptian President Mohammed Morsi has been courting foreign investors and has formally requested a $4.8 billion loan from the International Monetary Fund. If he's successful, these influxes of foreign currency would reduce the pressure on the pound.

Abdallah Khattab, an economic adviser to Morsi, says he's confident that the pound can remain stable.

"We are expecting more inflow of currencies in the coming months," says Khattab, "so for me, I see no reason for expecting devaluation for the currency."

Structurally, the Egyptian economy is ill. These injections of foreign currency just keep us afloat for a few years, and then the structural problems keep on arising.

Samer Atallah, economics professor at the American University in Cairo

But Iman Ismail, the CEO of the Egyptian Mortgage Refinance Co., isn't as confident. She says the government could contain the impact of a managed, gradual devaluation. But because Egypt imports much of its food — it's the largest importer of wheat in the world — a major devaluation would cause the price of food to dramatically increase and heighten political instability.

"Depreciation would have a very negative impact on the vast majority of people," she says.

And even if Egypt manages to secure foreign investment and loans to avoid devaluation, economist Samer Atallah points to much larger economic issues.

"Structurally, the Egyptian economy is ill," he says. "These injections of foreign currency just keep us afloat for a few years, and then the structural problems keep on arising."

There is a widening trade deficit, and Egypt's industries don't match the skills of its labor force. More than a third of Egyptians live under the poverty line. Unemployment is high, and the gap between rich and poor is huge.

"It's overwhelming, the amount of problems they inherited from the Mubarak regime," says Atallah. "It is overwhelming."