Accessibility links
In Chicago, 'Perfect Storm' Led To Teachers' Strike The issues at stake in the Chicago teachers strike have already been encountered in hundreds of school systems around the country, but few, if any, have led to strikes. In Chicago, it was a combination of personalities, politics and local issues that brought the situation to a boil. 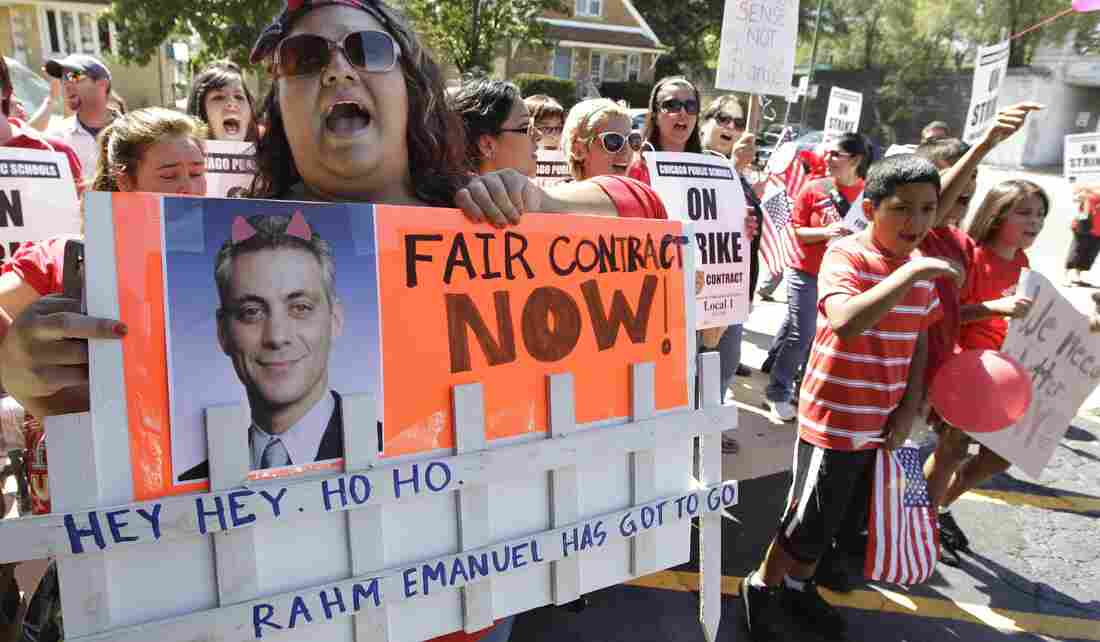 It was a major accomplishment in Chicago that teachers who used to walk out frequently had, for the past 25 years, managed to avoid a strike. But it's not surprising, many experts say, that things would fall apart now.

"I think it is a perfect storm," says Tim Knowles, head of the University of Chicago's Urban Education Institute. He says issues in Chicago — of tying teacher pay to student test scores, job security, longer school days and expanding charter schools, for example — are not unlike issues unions have grappled with in other cities, from New York to Los Angeles.

There is an aggressive reform effort, and there's a concerted resistance to the reforms that are being put on the table. I think it's the new Democrats vs. old labor.

Tim Knowles, of the University of Chicago's Urban Education Institute

"There is an aggressive reform effort, and there's a concerted resistance to the reforms that are being put on the table," he says. "I think it's the new Democrats vs. old labor."

In other cities, the two sides were not so evenly matched, and there was less of a fight. Frederick Hess of the American Enterprise Institute says it makes sense that in a powerful union stronghold like Chicago, these reforms would be tougher to swallow, especially at a time when money is tight.

"Historically, the way urban reform has been done is proposals involved huge new dollars for teachers," says Hess. "What we're seeing now is, for the first time, the Obama-era reforms being pushed without that spoonful of sugar."

As Hess sees it, the fact that the union walked out on an offer of a double-digit raise over four years shows that teachers are refusing to recognize the reality playing out across the nation.

"I've got to say, if I'm a leader of the Chicago Teachers Union, and my members are making $76,000 a year, and we've got a Democratic mayor, and there's a Democratic president running for re-election that my union has endorsed, it seems like a peculiar time to choose to have this kind of street fight," Hess says.

Indeed, the stakes get jacked up higher with all this playing out in Chicago, home of President Obama and his education secretary — and with Chicago's Mayor Rahm Emanuel now being portrayed as the devil on union placards. Emanuel, Obama's former chief of staff, is rallying support for the president's re-election campaign.

"If this stretches out, it could start to create some headaches for President Obama and Democratic leaders to pick a side — and clearly the president's not going to want to not support the union," says Hess. "But we've seen in a number of these purple industrial states that Republicans have been able to score points [by] pushing for the need to challenge public sector unions."

Both Obama and Republican nominee Mitt Romney have advocated tying teacher pay to student performance. But even those who see such reforms as inevitable say the battle over the issue is far from over.

"I think there's going be more and more pushback, whether it's strikes or other ways around teacher evaluation systems, and how to actually do that," says Paul Teske, dean of the School of Public Affairs at the University of Colorado, Denver.

Teske helped craft legislation there five years ago that Obama has hailed as a national model for teacher merit pay.

But Teske is one of many experts who point to problems trying to accurately evaluate teachers. Even after reforms are approved, he says, implementation often needs to be delayed.

"In some ways, I think it was a strategy to put it out there faster than may even be possible, and then maybe make accommodations," says Teske. "I mean, right now, teacher evaluation in most places is not very good, so I think to make firing and hiring decisions based on that is going to be difficult."

Mayor Emanuel has said teacher evaluations would not be binding in the first year. But that's little comfort to many Chicago teachers who say the policy could still unfairly cost thousands of teachers their jobs.