Accessibility links
U.S. Grows An Industrial Complex Along The Border In today's dollars, the bill for U.S. immigration enforcement since 1986 comes to $219 billion — roughly the cost of the space shuttle program. About 80,000 government workers depend on immigration enforcement. Despite a drop in illegal immigration, the border industrial complex is here to stay. 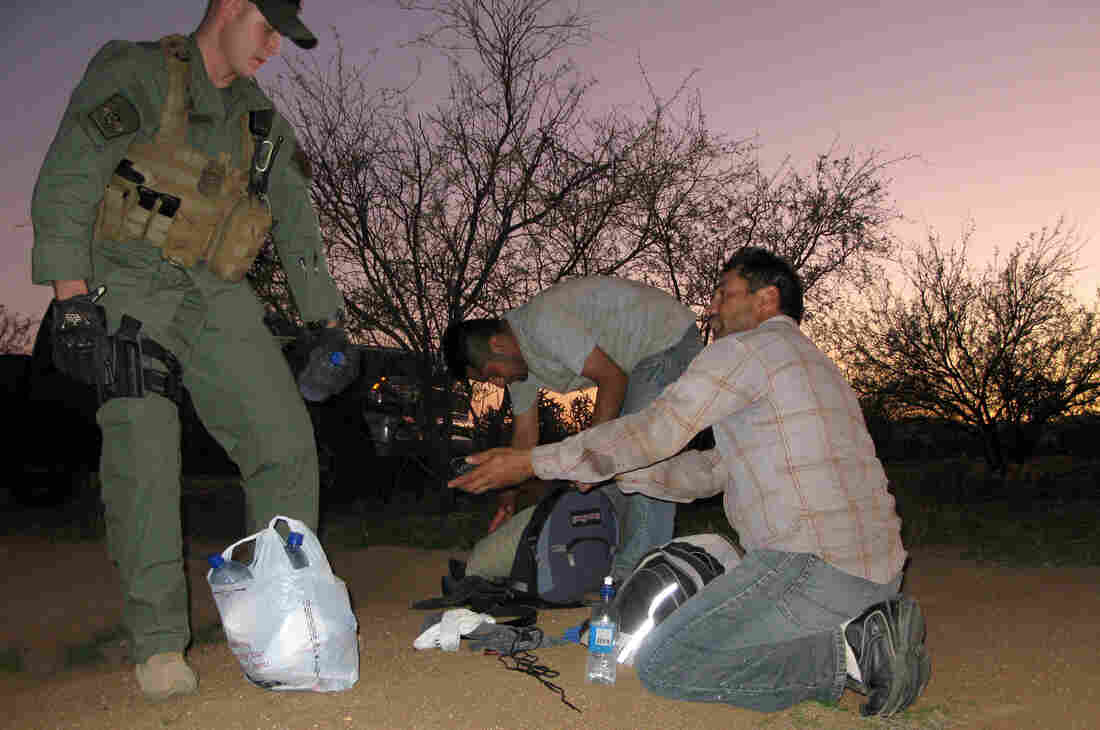 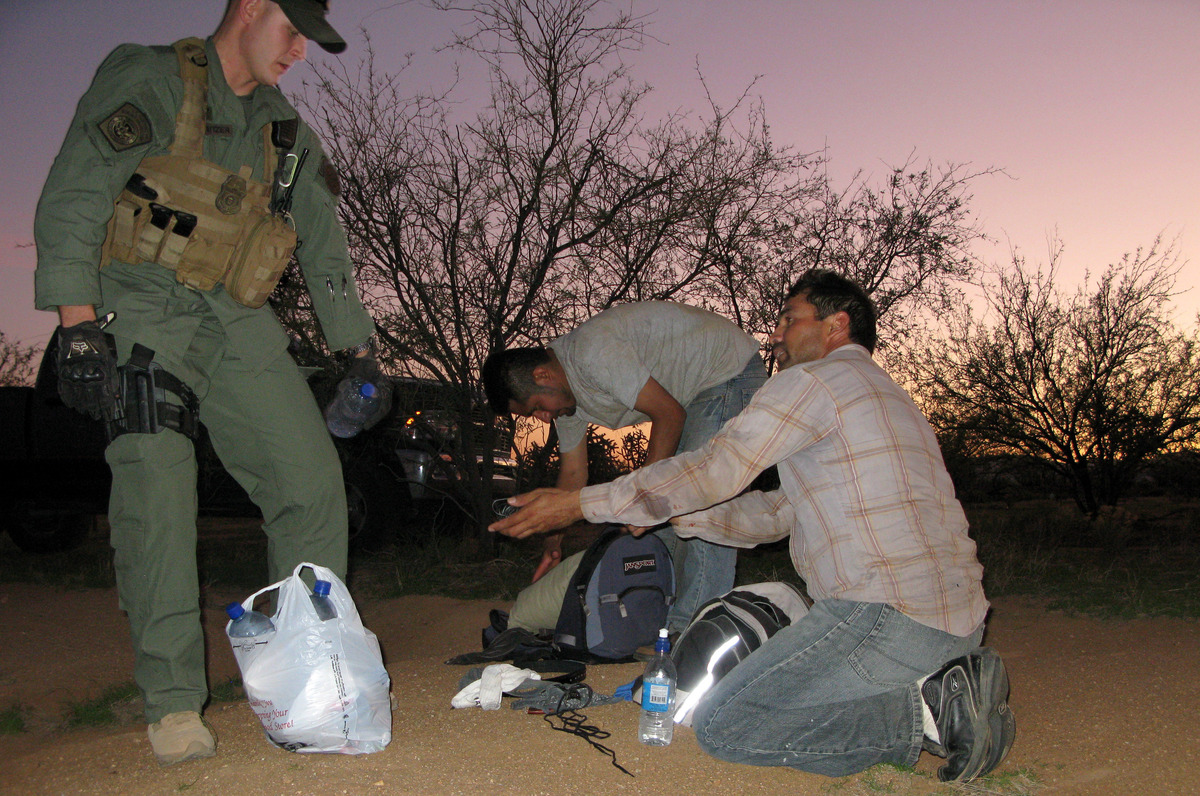 The United States' southern border bristles with technology and manpower designed to catch illegal immigrants and drug smugglers. Since 1986, the government has spent hundreds of billions of dollars on fences, aircraft, detention centers and agents.

But even as federal budgets shrink and illegal immigration ebbs, experts say that there's no end in sight for the growth of the border-industrial complex.

A Growing Investment On The Border

Stocked with equipment like Blackhawk helicopters — hundreds of aircraft fly daily missions — much of the southern border has grown into an industrial complex that is fed by the government and supplied by defense contractors and construction companies.

The infrastructure includes a border fence that in some places has been built and rebuilt several times. And up to 25 miles north of the border, towers, sensors and permanent checkpoints spread across the landscape.

The border-control efforts have spread even farther into the country, into cities where Immigration and Customs Enforcement agents pursue illegal immigrants and visa violators. Nationally, it extends to roughly 250 immigrant detention centers.

Some of those centers are run by the government, some by private prison corporations. The government spends an estimated $5 million each day to house detainees awaiting deportation.

All of this effort takes manpower; roughly 80,000 federal employees work in immigration enforcement.

"It is safe to say that there has been more money, manpower, infrastructure, technology, invested in the border-protection mission in the last three years than ever before," says Homeland Security Secretary Janet Napolitano.

Since the last comprehensive immigration reform was passed by Congress in 1986, creating this industrial complex focused on the southern border has been a bipartisan affair. And it really picked up after Sept. 11, 2001: Nearly every piece of security legislation since then has contained add-ons for immigration enforcement.

If you add up the budgets of the responsible agencies since 1986, the bill is $219 billion in today's dollars — roughly the entire cost of the space shuttle program. Unlike the space shuttle program, though, there's no end in sight. The chairman of the House Appropriations Committee, Kentucky Republican Hal Rogers, agrees it's going to be hard to pull back spending.

"It is a sort of a mini industrial complex syndrome that has set in there," he says. "And we're going to have to guard against it every step of the way."

Arguably, there hasn't been much guarding so far. Take, for example, a tall steel tower teeming with devices in the desert southwest of Tucson.

"This has sensor responders on it, as well as a communications package," says Border Patrol Agent Brent Cagen, "which is a radar, day and night cameras, infrared, laser technology."

The tower is part of SBI-Net (the SBI stands for Secure Border Initiative), which was supposed to be a high-tech virtual fence across the entire 2,100-mile border with Mexico. Instead, the towers cover just 53 miles. Homeland Security pulled the plug on the project after five years and almost a billion dollars. 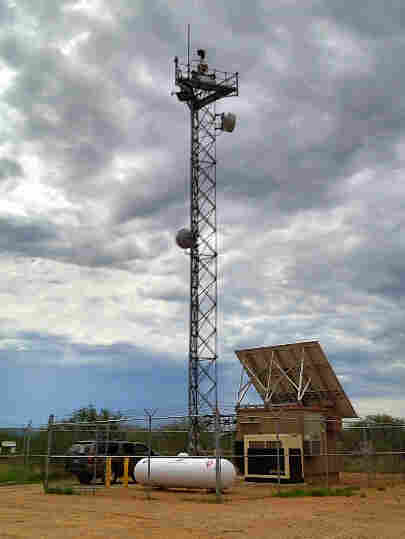 One of the towers south of Tucson built as part of the aborted SBI-Net plan. It has radar, microwave, video, infrared and ground-sensor relays. Ted Robbins/NPR hide caption 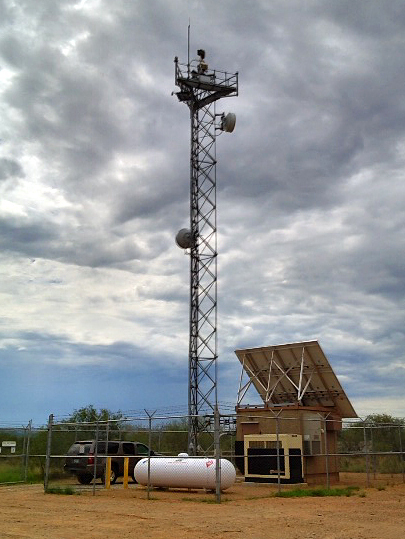 One of the towers south of Tucson built as part of the aborted SBI-Net plan. It has radar, microwave, video, infrared and ground-sensor relays.

Mark Borkowski, who's in charge of technology for Customs and Border Protection, started his job during the SBI-Net debacle.

"Frankly, in my view it was a disaster," he says. "And I ended up, as it turns out, being the person who ended up having to try to manage our way through that disaster."

Boeing Corp. built the towers for SBI-Net, but the system was ineffective. Some components weren't designed to work in the desert.

"There were issues with heat," Borkowski says. "Sometimes it was just poor design of cabling."

It was actually the third time this had happened with high-tech towers. In 1997, there was ISIS — the Integrated Surveillance Intelligence System. That was scrapped in 2003 because the technology didn't work. Then came America's Shield, also scrapped.

The federal government hasn't given up. Right now, it's going over proposals to build hundreds of new towers. Many of the same defense contractors involved before have bid again: Raytheon, Lockheed and Boeing.

Despite the problems, members of both parties insist the massive spending on the border buildup is working.

"Immigration numbers down to 1971 levels; violent crime either down or flat; seizures of contraband up," says Napolitano, slapping the table in her office. "Those are material elements of proof, to show that we have got our arms around the border issue. And we are sustaining that."

But there are also bigger forces at work: economics and demographics. For the last 30 years, Douglas Massey, a sociologist at Princeton University, has been studying Mexican immigration patterns. He says fewer people are crossing illegally because the American economy collapsed in 2008, taking away the job magnet pulling people here. And those who were already here stayed.

Meanwhile, the economy has been improving in Mexico. And the birthrate there has fallen sharply. Fewer working-age people are available to come here and fewer need to. 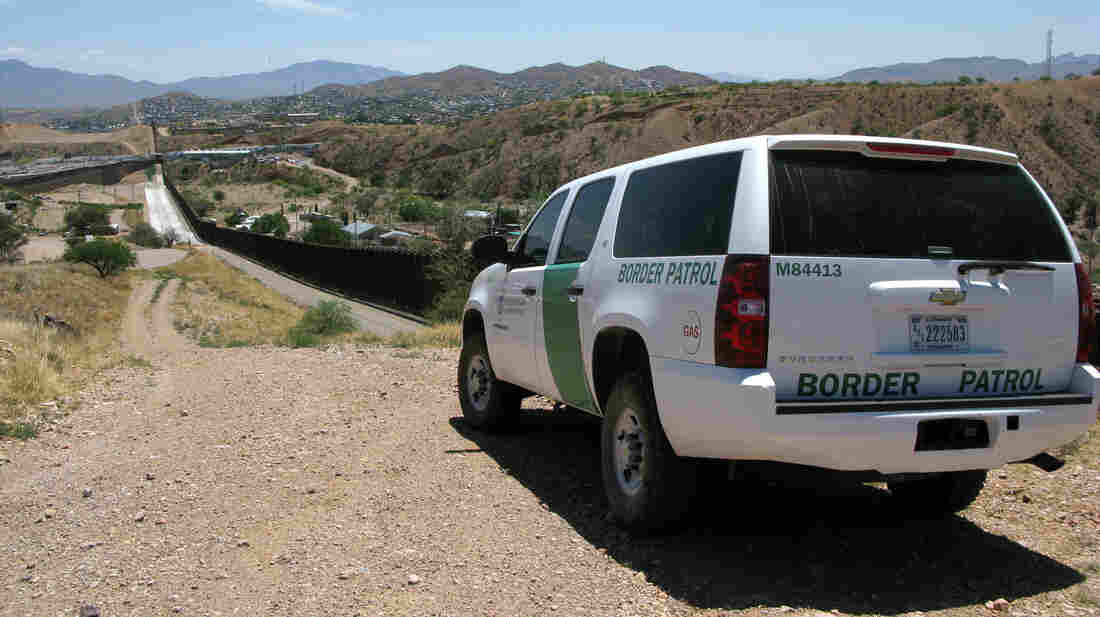 A Border Patrol vehicle patrols the fence separating the cities of Nogales, Ariz., and Nogales, Sonora. The fence has been rebuilt twice. Ted Robbins/NPR hide caption 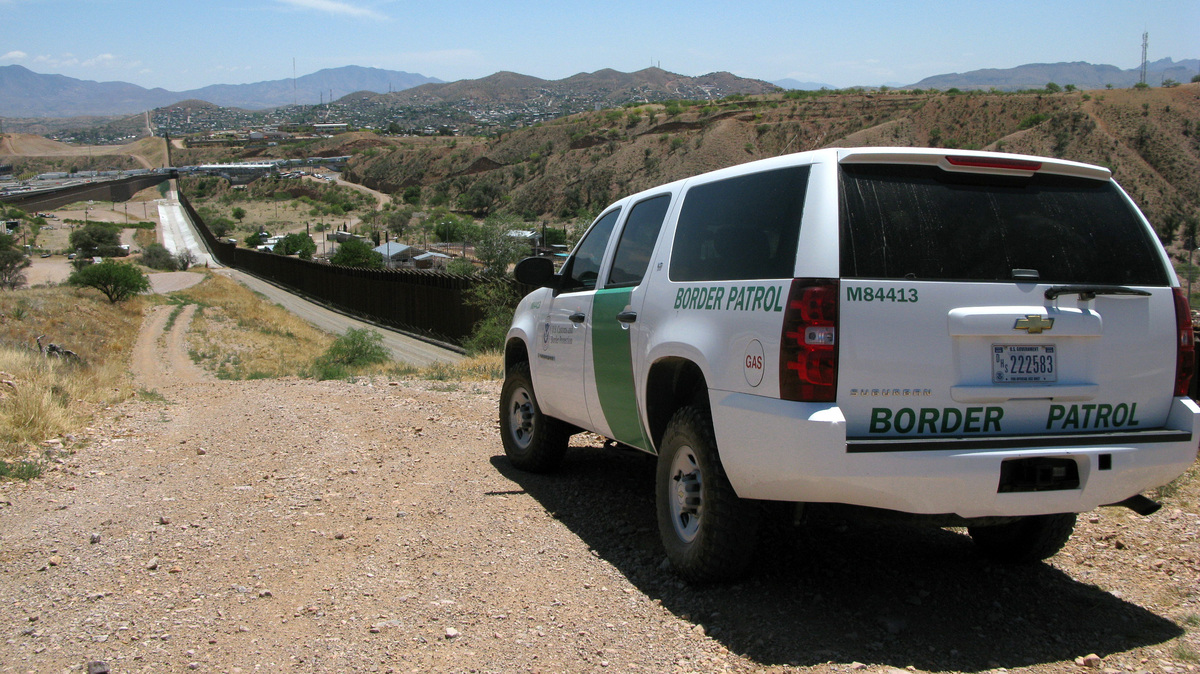 A Border Patrol vehicle patrols the fence separating the cities of Nogales, Ariz., and Nogales, Sonora. The fence has been rebuilt twice.

"Personally I think the big boom in Mexican migration is now over," Massey concludes.

If that's true — and a number of experts think it may be — the U.S. is at a crossroads on border spending and strategy.

"DHS is now dealing with the same challenge the entire government's facing, and that's the realization that our budget is hemorrhaging from red ink," Rogers says. "And we've got to cut spending before it's too late."

For the first time in its history, the Department of Homeland Security will get less money in its upcoming budget than it did the year before. But Arizona Democratic Rep. Raul Grijalva says there's a lot of pressure from Congress and lobbyists to maintain, and even move forward, with programs.

"There's a mutual dependency that's been created in the industry and Homeland Security," he says. "And that industry ... is starting to become a very, very powerful lobby up here."

There are still calls for more infrastructure, more technology and more manpower to feed the border-industrial complex.

Seeing More Than A Fence: Road Trip Along The Southern Border June 20, 2012