Accessibility links
Blast Walls Or Open Arms? Diplomacy's Delicate Mix In recent decades, many U.S. embassies have become virtual fortresses. The difficulties diplomats have in mingling freely in other countries complicates their task of gleaning information and promoting the U.S. message. 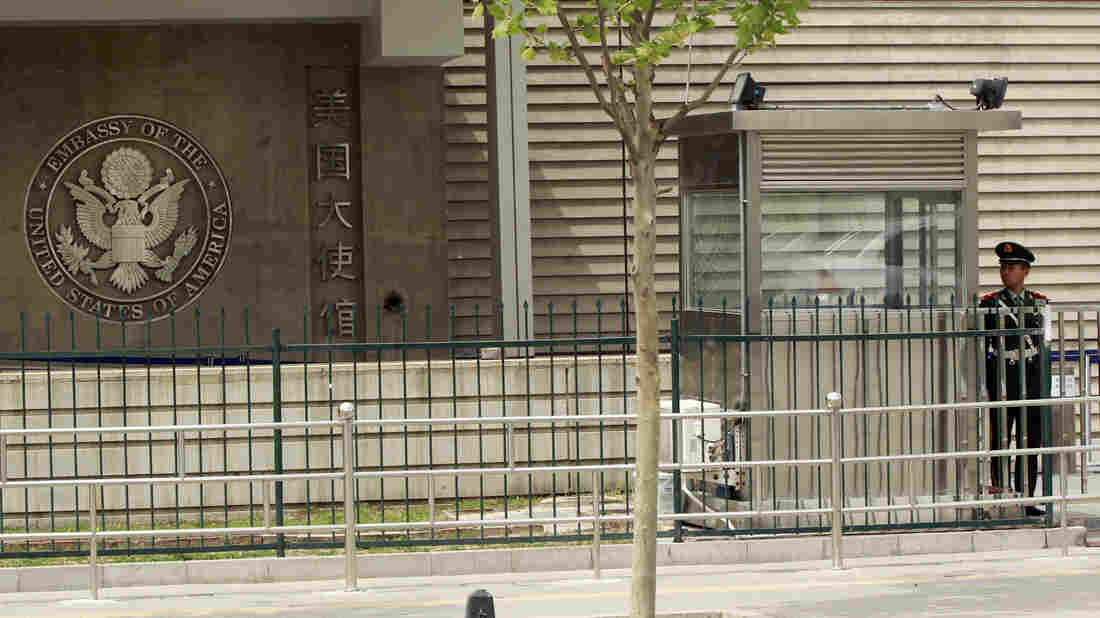 A Chinese paramilitary police officer stood guard at the entrance of the U.S. Embassy in Beijing, China, on April 29, 2012. Vincent Thian/AP hide caption 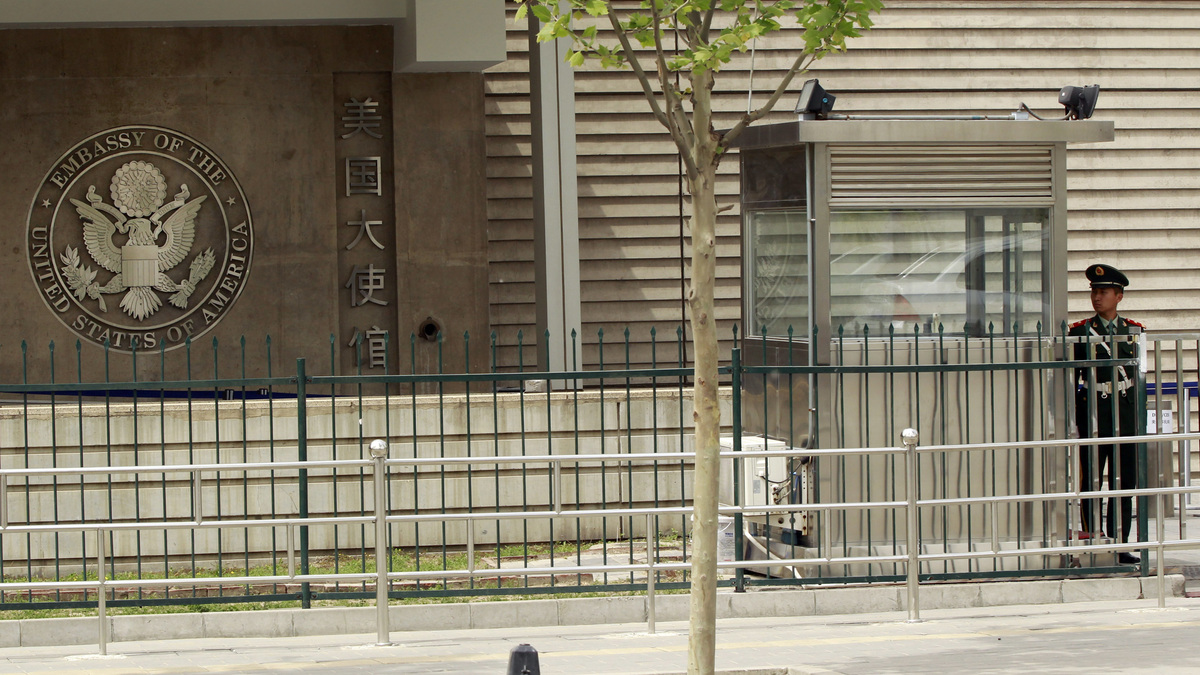 A Chinese paramilitary police officer stood guard at the entrance of the U.S. Embassy in Beijing, China, on April 29, 2012.

The order to tighten security at all U.S. diplomatic posts around the globe following attacks in the Middle East may be necessary, but it will come at a cost.

There has been an enormous increase in security precautions at American embassies and consulates over the past 30 years, and the bubble that many diplomats now operate under makes it more difficult for them to interact with people in other countries, limiting their ability to gather information and promote the American "brand."

"Sometimes I thought security restrictions were overly stringent," says Matthew Bryza, who served as ambassador to Azerbaijan until earlier this year. "We got into a mindset whereby we had a Fortress America concept and really did let hypersecurity take over."

"We could find a much better way to strike a balance between safety and security," he said.

Bombings, assassination attempts and terrorist attacks are a near-constant part of diplomatic work in parts of the world. Just this week, U.S. embassies were stormed in the capitals of Egypt and Yemen and an attack on the consulate in Benghazi, Libya, resulted in the deaths of four Americans, including Ambassador Chris Stevens. 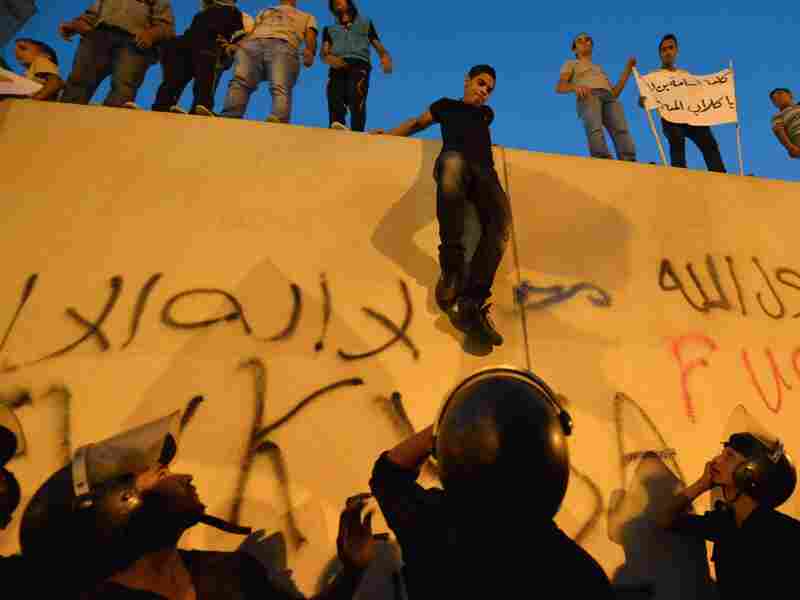 Egyptian riot police stood guard Tuesday as protesters climbed down from the wall of the U.S. Embassy in Cairo during a protest over a film deemed offensive to Islam. Khaled Desouki/AFP/Getty Images hide caption

"American ambassadors around the world are targets," says Ross Wilson, a former ambassador to Turkey. "They're targets of would-be assassins and terrorist groups and people with more or less serious grievances."

Security for overseas missions became a more pressing issue following the 1983 bombing of the U.S. Embassy in Lebanon. A major study released in 1985 by the State Department, known as the Inman Report, recommended changes to diplomatic facilities overseas.

Such concerns were underscored by the simultaneous bombings of U.S. embassies in Kenya and Tanzania in 1998, linked to al-Qaida, that left more than 200 people dead and 5,000 wounded. The terrorist attacks of Sept. 11, 2001, led to further precautions and restrictions for diplomatic personnel at American embassies and consulates.

Today, it's commonplace for U.S. missions to be surrounded not just by Marines and indigenous security personnel, but by traffic barriers and blast walls.

Some security choices are made for budgetary reasons, says John Campbell, a former ambassador to Nigeria. It costs less to build a new, high-walled embassy in a corn field, for example, than to retrofit older facilities in capital cities and hire the necessary security personnel.

"Embassies have been increasingly moved out of the center of cities to less settled areas where you can have bigger setbacks, greater distance from the roads and other buildings," says James Dobbins, a former assistant secretary of state.

Moving embassies out of capitals presents its own problems, Dobbins says. Just in terms of logistics, it's simply more difficult for diplomats to meet with foreign government officials or average citizens, because everyone has to spend more time driving to meetings or passing through security checkpoints.

"A diplomat's job is to gather information and send it back to Washington, and to convey Washington's views out to other capitals," says Dobbins, director of the Rand International Security and Defense Policy Center. "If you can only do two meetings a day instead of four, you're only able to influence half as many people or gather half as much information."

Dobbins recalls that his first diplomatic posting was to Paris in 1968, when the city was undergoing historic student demonstrations that led to a general strike. He was able to move freely through the Sorbonne and the scenes of street battles and glean information.

That kind of free-range diplomacy isn't possible today, certainly not in more dangerous countries and maybe not even in places like Paris.

"Were embassy officers wandering around Tahrir Square talking to people?" Dobbins asks, referring to the epicenter of protests last year in Cairo that led to the downfall of Egyptian President Hosni Mubarak. 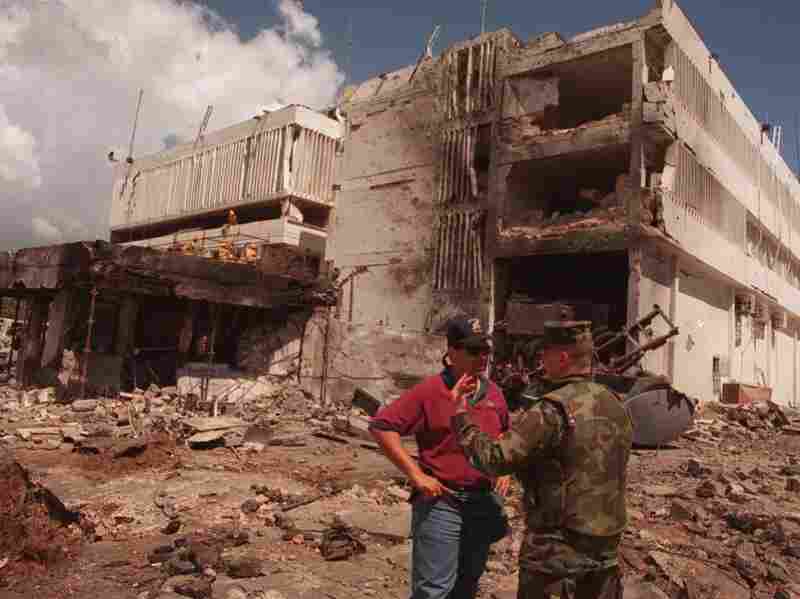 A U.S. Marine talks with an FBI investigator in front of the U.S. Embassy in the Tanzanian capital of Dar es Salaam after it was blown apart in a 1998 terrorist bombing. Brennan Linsley/AP hide caption 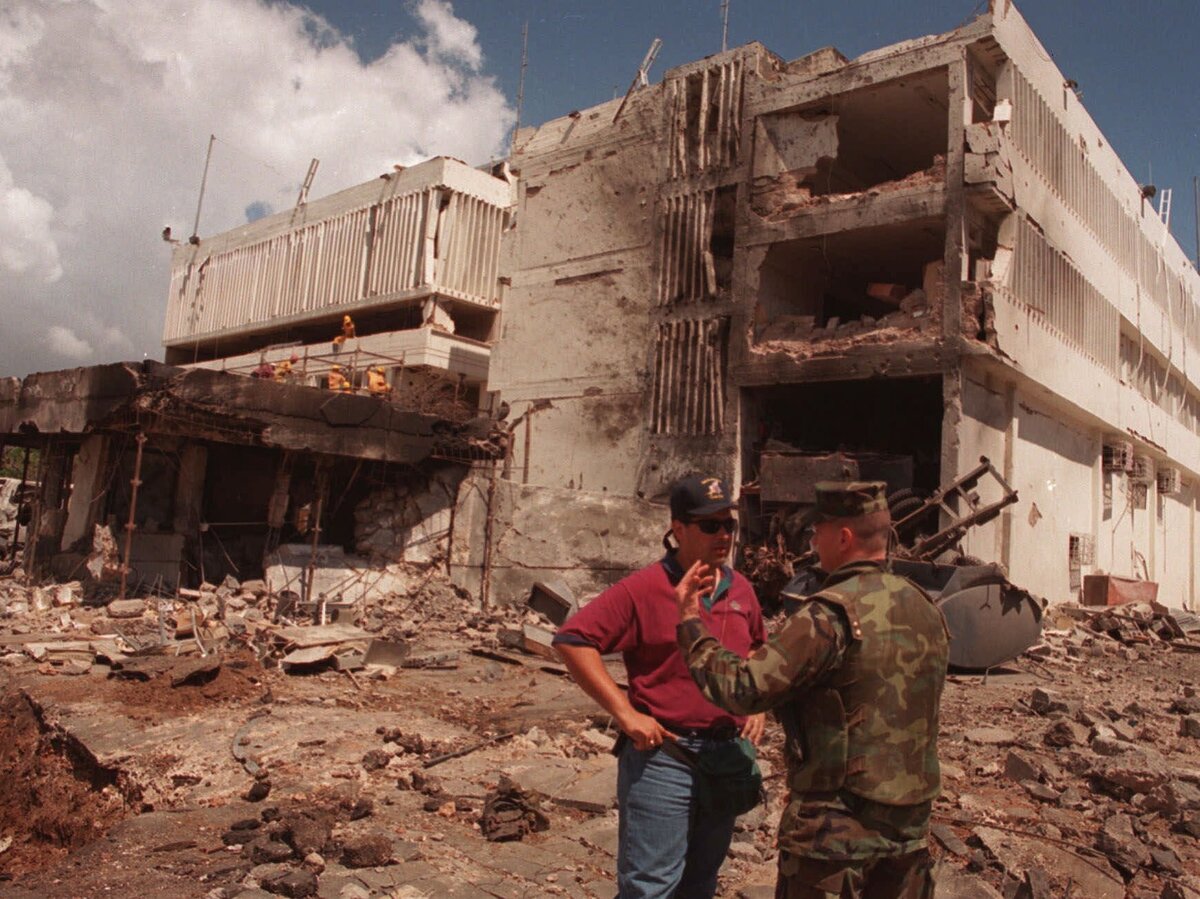 A U.S. Marine talks with an FBI investigator in front of the U.S. Embassy in the Tanzanian capital of Dar es Salaam after it was blown apart in a 1998 terrorist bombing.

"Maybe, but probably not many of them," Dobbins says. "The embassy was probably as reliant on watching CNN as the rest of us were."

Other diplomats recall days earlier in their careers when they were out and about all day and out on the town nearly every night. They were able to get a better sense of the fabric of places than might be possible today.

"If you have to book meetings days in advance and have to book security details, it really creates a separation from the people we meet with," says Kurt Volker, a former ambassador to NATO.

Even low-level diplomats in places like Yemen, Pakistan and Iraq often travel in armored cars with guards. Those who live in fortified housing compounds have a much harder time gaining a sense of the society they're living in, or perhaps even gaining fluency in the local language.

"If you didn't do that, and you ended up with U.S. diplomats being taken hostages or killed, that would be horrible for the individuals involved and create a black mark for the U.S. image abroad," says Volker, who is now executive director of Arizona State University's McCain Institute for International Leadership.

But such conditions don't prevail everywhere. There are certainly more restrictions than there once were, and the physical appearance of American embassies now is not very welcoming, says Wilson, the former ambassador to Turkey.

The idea that diplomats are no longer able to master their territory, however, can be overstated, he says.

"In most countries, this is not the No. 1 thing they're focused on," says Wilson, now director of the Eurasia center at the Atlantic Council, a think tank. "It would be very misleading to say that our diplomats' ability to mix and mingle and deal with local interest groups and diplomats and businesses is seriously circumscribed."

The Key To Security

Tuesday's attack in Benghazi and the storming of the U.S. Embassy in Cairo, reportedly sparked by a film ridiculing Islam's Prophet Muhammad, shows that efforts to keep diplomats completely safe inside compounds may not work anyway.

"It's like what Bill Richardson says about the Mexican border — you build a 10-foot wall, they show up with an 11-foot ladder," says Barbara Bodine, a former ambassador to Yemen.

More than building walls, security depends on building relationships with the host government's security apparatus, says Bryza, who failed to win Senate confirmation to his post in Azerbaijan.

Cooperation from local law enforcement should be a given — in fact, it's a legal requirement under the Geneva Conventions — but relations can sometimes be strained when the U.S. has criticized those same security agencies for human-rights violations, Bryza notes.

But ultimately, it is local security forces that are going to make the difference, Bodine suggests. "Even if you try to create a security perimeter, at some point you're up against what the host government will and can provide," she says.

"The idea that if we just kept inside our embassies, we'd be safe — we've tragically seen that it isn't possible," says Bodine, who now teaches at Princeton University. "What made Chris Stevens an exceptional diplomat wasn't staying inside the walls; it was that he was out and he was about, getting to know the Libyans."