Accessibility links
Teacher Evaluation Dispute Echoes Beyond Chicago One of the sticking points in the Chicago teachers' strike is how teachers should be evaluated — and the role student performance should play. Districts are grappling with the issue nationwide, but there's little agreement on how to implement such a system well. 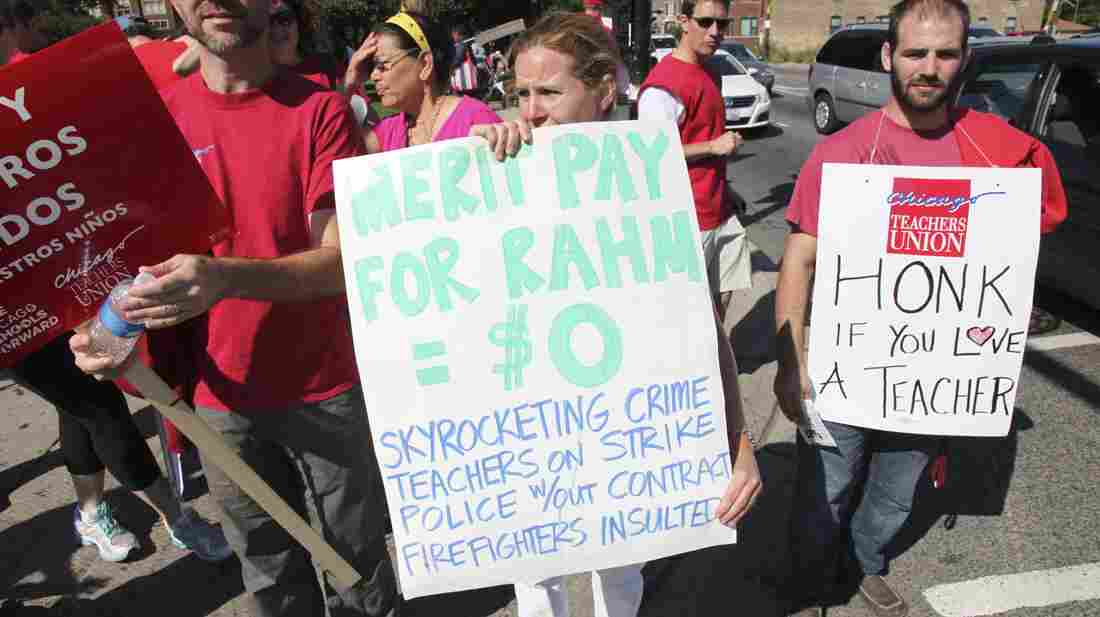 One of the primary disputes in the Chicago Public Schools teachers' strike is over Mayor Rahm Emanuel's proposal to link teacher pay to student performance. Robert Ray/AP hide caption 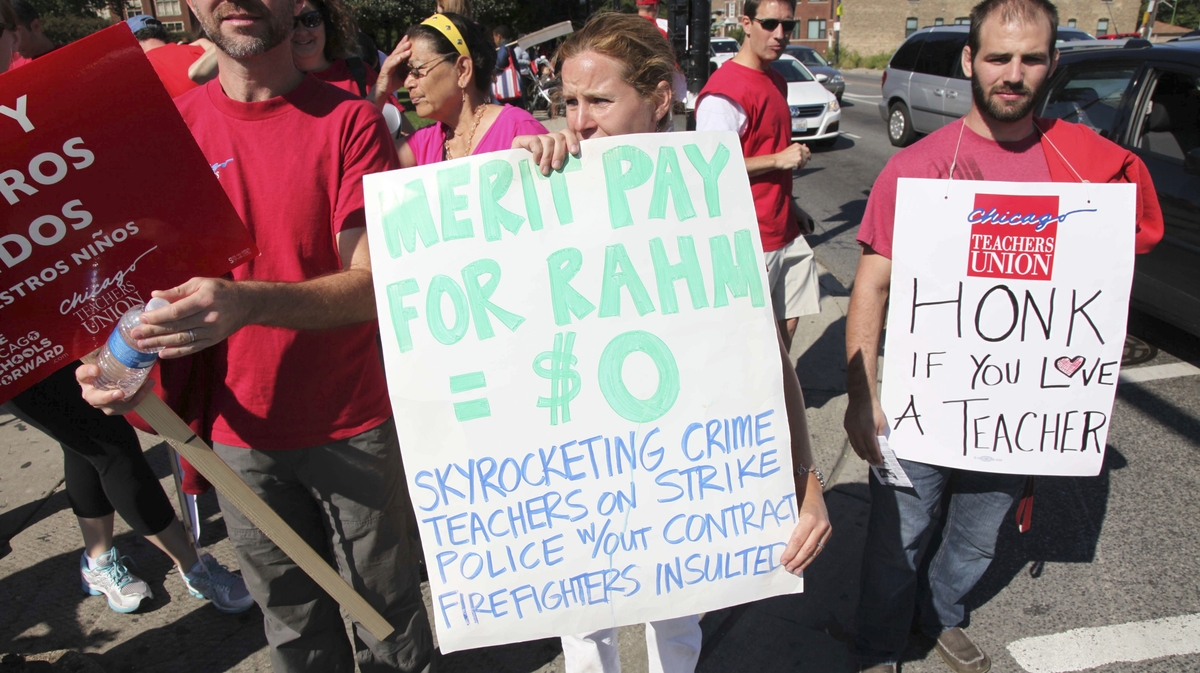 One of the primary disputes in the Chicago Public Schools teachers' strike is over Mayor Rahm Emanuel's proposal to link teacher pay to student performance.

One of the primary issues at the heart of the the Chicago teachers' strike is whether student test scores should be used to evaluate teachers and determine their pay. Mayor Rahm Emanuel is pushing that approach, as are other officials around the nation.

But many teachers insist that it's inherently unfair to grade their teaching based on their students' learning.

Just the fact that there's a growing discussion around teacher evaluations is a huge leap for the education industry. Historically, reviews have been haphazard, ranging from nonexistent to an annual classroom visit from the principal — often referred to as the "drive-by."

"Teachers aren't used to being evaluated in an honest way," says Kate Walsh, president of the National Council on Teacher Quality. Walsh says teachers have long been getting an automatic pass — one that's not always deserved.

"This is a system where 99 percent of all teachers were being found to be satisfactory," she says. "You know, it's [like], everyone gets a trophy."

These days, even teachers agree that quality should matter. But using test scores to measure quality — and linking quality to pay — is a much more contentious issue.

'A Down And Dirty Fight'

About two dozen states now mandate that some objective data, like standardized test scores, be a factor in teacher evaluations, but actual policies vary. In about half of those states, student scores count for 50 percent of a teacher's grade. The other states give scores less weight, or leave it up to local districts to decide.

And, increasingly, student performance is being tied directly to pay.

Walsh says it's no surprise that in several cases, the issue has landed in court.

"There is no way to avoid this conversation, if you want to put it in polite terms," Walsh says. And if you prefer uglier terms, she says, you can call it a "down and dirty fight."

Either way, Walsh says, getting through the disputes over evaluations "is gonna be rough."

Teachers argue it's unfair to blame them for a student's poor performance, when so many external factors are at play.

And, they say, there's a great deal of nuance in what they do, like inspiring kids or teaching persistence. The formula experts have developed to calculate a teacher's "added value" from test scores simply can't measure that, many argue.

"I mean, it's not ready for prime time," says Richard Iannuzzi, president of the New York State United Teachers union. "So why would we directly connect it to decisions about tenure or salary?

Learn More About The Teachers' Strike

"We don't pay doctors on the number of heart patients who survive heart surgery — that's not how we do business," he says. "Otherwise, we would be chasing delicate patients away from great doctors."

Evaluation Formulas A Work In Progress

Experts concede that teacher evaluation formulas are still a work in progress. But Dan Goldhaber, director of the Center for Education Data and Research at the University of Washington, Bothell, says algorithms have now become very sophisticated. They measure student improvement, not just scores, and they adjust for everything from socioeconomic factors to class size.

He says how much weight to give test scores is debatable, but they shouldn't be ignored.

"The baseball analogy is probably apt," Goldhaber says. "Batting averages vary from year to year. But I don't think anybody would say that we're not going to use it for anything — that's silly."

Research shows that linking pay to performance doesn't really motivate weaker teachers to suddenly improve. But, Goldhaber says, it does play a big role in improving faculty in general.

"You change the mix by encouraging the right teachers to stay in the profession, and the right teachers to leave," he says. "And/or by creating informal learning; a teacher for instance, goes to talk to another teacher who got a big bonus and says, 'What the heck are you doing to be so productive?' "

But teachers argue that collaboration would actually suffer under performance-based evaluations, as the system would pit them against each other as they compete for better results.

Iannuzzi of New York State United says that kind of competition is anathema to what teachers do. "I mean, it's just a different world in education. It is a world about lifting all boats. It's not a world about my battleship taking out your battleship."

Iannuzzi says schools are rushing into what's being sold as a quick fix. But advocates of performance-based evaluations say the stakes are too high to wait.

Reform advocates concede that some decent teachers may indeed be unfairly penalized. But, they argue, that's better than bad teachers not being penalized, with students paying the price.