Accessibility links
Movie Review - 'The Master' - A Glimpse Into Cult Life Paul Thomas Anderson's film offers a study of the American psyche and the search for meaning after World War II. NPR critic Ella Taylor says the film, which draws inspiration in part from the life of Scientology founder L. Ron Hubbard, will not be easily forgotten by its audience. (Recommended) 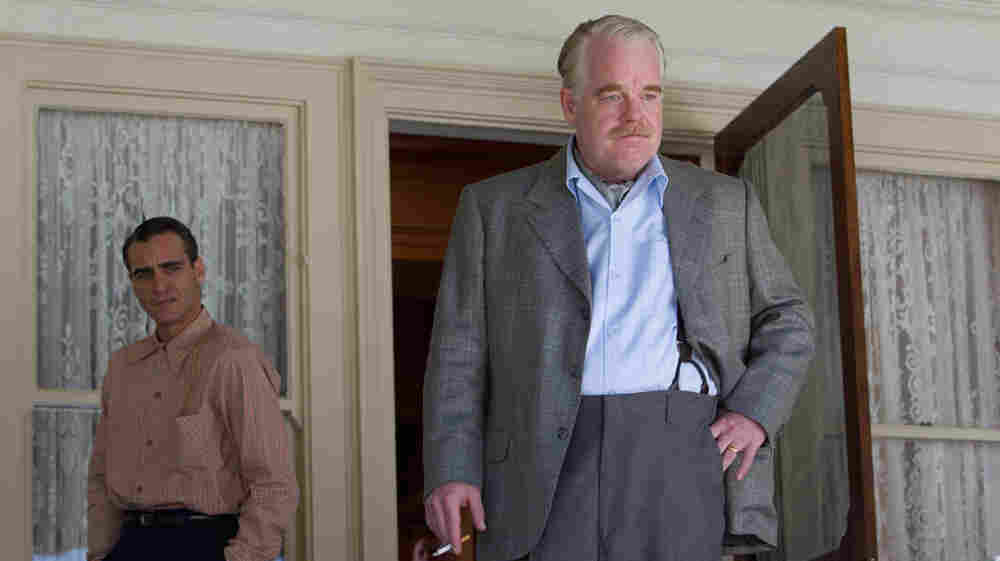 Overheard after a screening of The Master:

"So I guess this is an unfinished print?"

"Nope. This is the one they're rolling out."

And it's true that there are moments, especially toward the end of its meandering 137 minutes, when The Master feels like a series of brainy but disconnected thoughts about 20th-century America. That's how writer-director Paul Thomas Anderson works, and for those who don't insist on coherence or closure in narrative any more than they do in life, it's part of the thrilling madness of his method.

It's not that Anderson makes it up as he goes along, like the burbling cult leader in this monumental study of American hucksterism and its casualties. Instead, the writer-director discovers his deeply buried themes as he makes his films, which is just one of many reasons why The Master will burrow its way into your mind, heart and soul, and simmer there long after you leave the theater.

Without ever saying so, the movie adds up to nothing less than a social psychology of the nervous, spiritually questing geist of post-World War II America. After hard times were declared officially over and peace and prosperity were proclaimed, the legacy of the past opened a space for all manner of restless malignancies to take root.

As with Anderson's equally ambitious There Will Be Blood, the moral rot plays out as an epic struggle of wills between two pathologically bonded men, both seamen, both scarred and damaged by war or life or who knows what. The Master may be one of the most twisted father-son tales ever told, an oedipal melodrama shot through with repressed homoerotic desire and a warped but authentic love between two radically different men for whom attack is the first line of defense.

Like Daniel Day Lewis, Joaquin Phoenix has aquiline, mercurial features that seem carved out of the sharp edge of a cliff, and a snarling animal energy straight from the primordial ooze. He's magnificently feral as Freddie Quell, a U.S. Navy veteran and a vitally unpredictable wreck of a man bouncing from one failed job to another after service in the Pacific. When he's not brawling with strangers or bedding any woman who will have him, rootless Freddie is, tellingly, a family photographer. But his proudest accomplishment is mixing drinks with paint thinner as a key ingredient.

It's this skill, along with a propensity for indiscriminate violence that barely covers a heartbreaking innocence — his first and only true love could only be a small-town girl named Doris Day — that draws Freddie under the toxic wing of Lancaster Dodd (Philip Seymour Hoffman), a charismatic cult leader upon whose pleasure boat Freddie stows away while blind drunk.

Hoffman does shifty so well that it's never a stretch to believe in him as a con man. Only here he's a con man who has bought his own propaganda, and that complicates things beautifully. A self-styled, seemingly jolly gent who never travels without an entourage of the faithful, Dodd cruises the coast of America, landing only to fleece wealthy dowagers (among them a wonderfully funny and sad Laura Dern) while harnessing them to "The Cause" with cascades of loopy mumbo-jumbo about "processing" their pseudo past lives in order to juice their emotionally empty present. 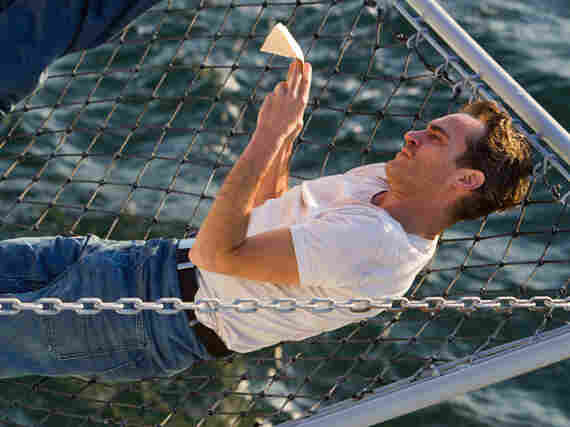 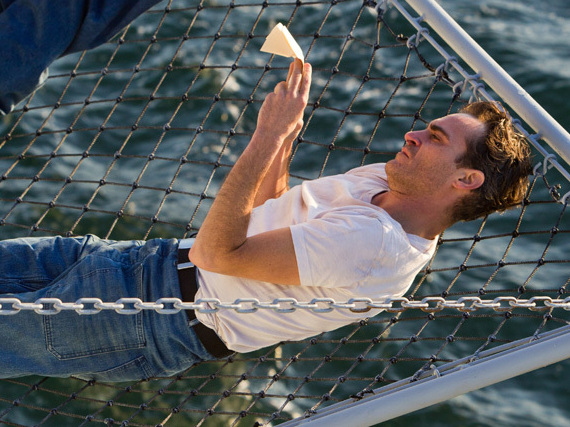 Phoenix's magnificently feral performance is essential to the emotional heft of The Master.

There's no question that The Master draws on the life and work of Scientology movement founder L. Ron Hubbard, and the similarities with Hubbard's rising years, accompanied by brief but potent gusts of schoolboy humor and weird sex, will doubtless offend devotees. But the movie is less an indictment than a portrait of how the authentic search for family and community — a recurring theme explored by Anderson in Boogie Nights — can become warped, along with character itself, in a spiritual and moral vacuum.

Freddie may be helpless against his own worst impulses, but so, too, is Dodd, a man whose appetites and need for control are forever at war with his love for a man in whom he may see parts of himself. For worse rather than better, nobody understands Dodd better than his wife, a steely china doll who panders to his furtive sexuality while using it to dominate him. (If Amy Adams doesn't clear Best Supporting Actress for her chillingly proto-fascist turn, there's no justice in Hollywood.)

The savagely corrupt micro-world over which the Dodds reign is portrayed with the same intense, classical beauty we saw in There Will Be Blood, another tribute to Hollywood classics of the '50s and '60s. Filming with scarce 70 mm stock, Anderson and cinematographer Mihai Malaimare Jr. achieve an enhanced realism that makes a field of cabbages look as lovely, and as menacing, as the roiling ocean or the desert where Dodd and Freddie play a seemingly pointless motorcycle game that's rich with significance for their relationship past and future.

There and elsewhere in this deliberately ambiguous drama, we discover that Freddie is far from dumb, but that he may be as tragically deracinated and as vulnerable as anyone else in the malevolent influence of the Dodds, dangerous messiahs to a country that believes itself to be in recovery yet has come unglued. In The Master, life is lived forward with choppy unevenness, but it is best understood backward, as the opening act of a falling apart whose fruits we are reaping now. (Recommended)